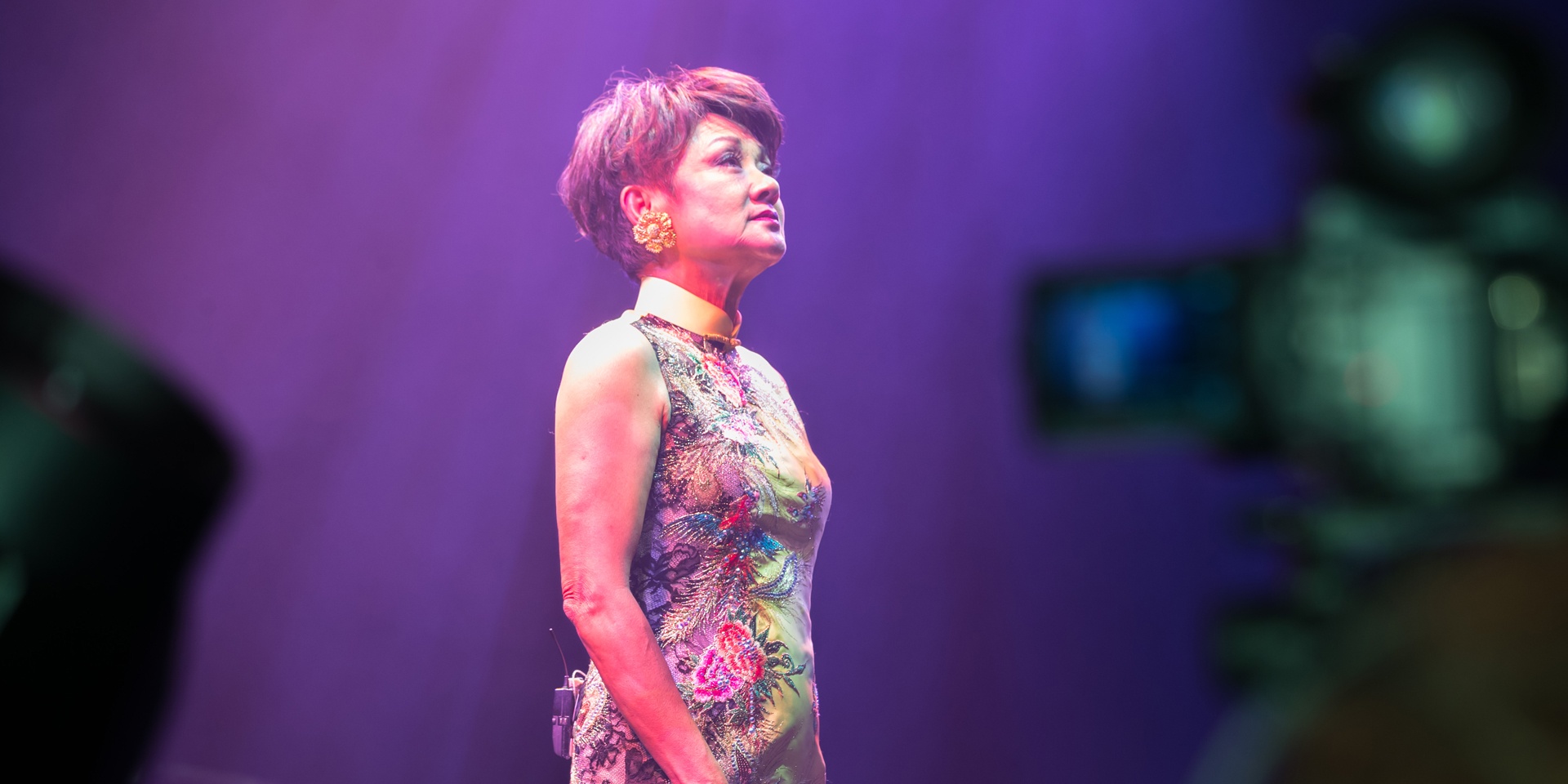 When Bandwagon was extended the opportunity to review Frances Yip's concert in Singapore, we hesitated – mainly because none of us are really familiar with her music. None of our musical diets really include classic Cantopop, and it's not Bandwagon's practice to throw writers into the extremely deep end of the reviewing pool. But it turns out that our team member Hazel's mum is a fan. A huge fan. And we're always enthusiastic about having new voices on the site, so it was a obvious choice to have Ms. Agnes Tay review this concert for us. Enjoy!

Frances Yip does not look 70 years old at all!  She sang with power and attitude!

She is considered a legend already as my Hong Kong friends were telling me. She is highly respected for her contribution to the Hong Kong music scene!

We travelled with her as she shared her life story through the years from her humble beginnings. 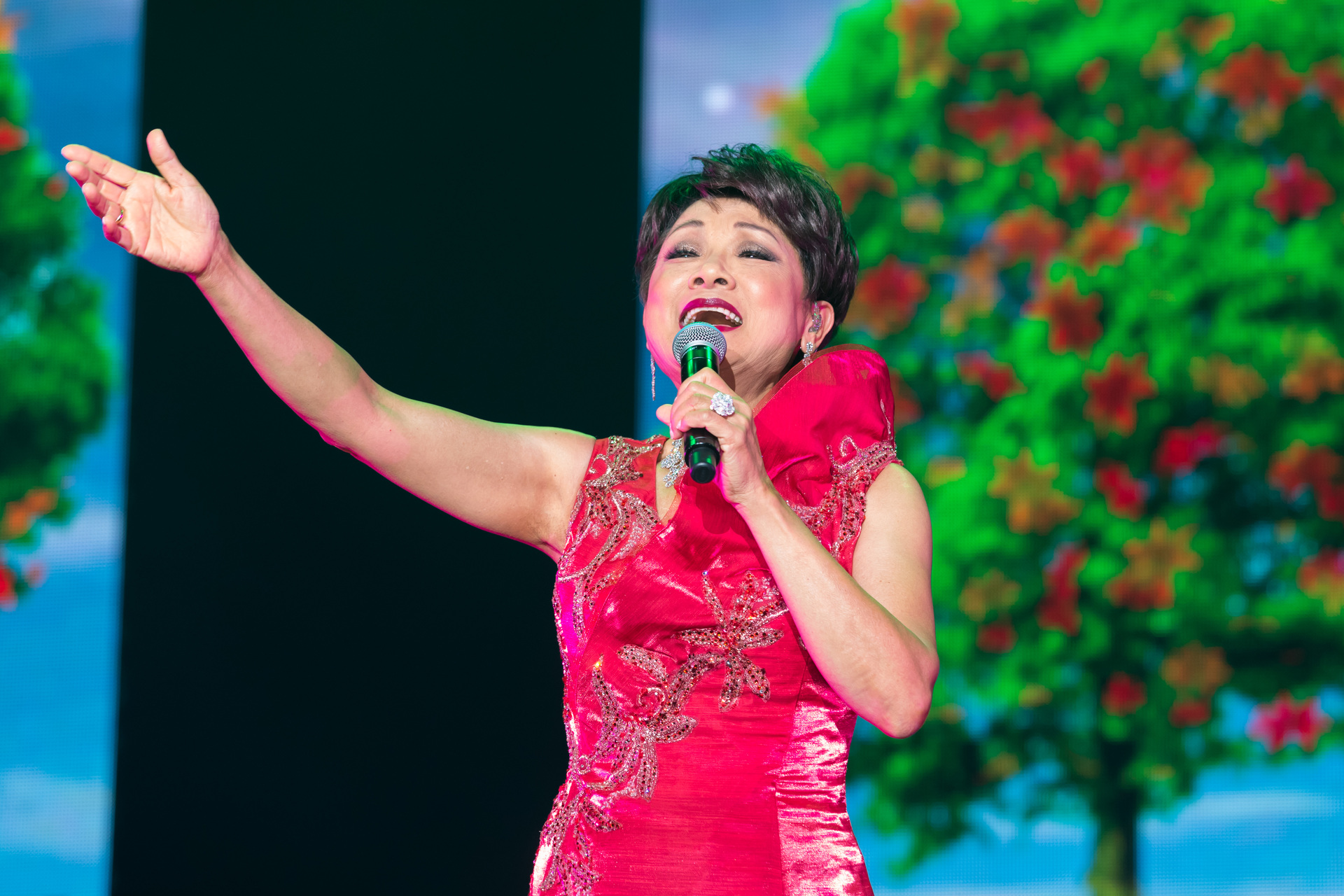 The concert opened with a showcase of all her amazing albums through the years.  She commenced singing non other than her hit song ‘The Bund’ (上海滩), theme song of the popular Hong Kong TV drama in the 1980s across the whole of Asia!

Her energy was high right from the start and she belted various classic songs perfectly to a very attentive audience.

She shared where she used to grew up in a ‘ulu’ place, Tsuen Wan in Hong Kong, how she loved to sing and perform since young as she sang her parents’ favorite songs – ‘天涯歌女 (Song Bird)’ (her mum’s favorite),  ‘You Don’t Have to Say You Love Me’ and  ‘All Kinds of Everything’ (her dad’s favorite).

She went on to sing English evergreens like ‘Raindrops Keep Falling On My Head’, ‘Superstar’, and ‘Never Never Never’, songs that the audience was absolutely familiar with. 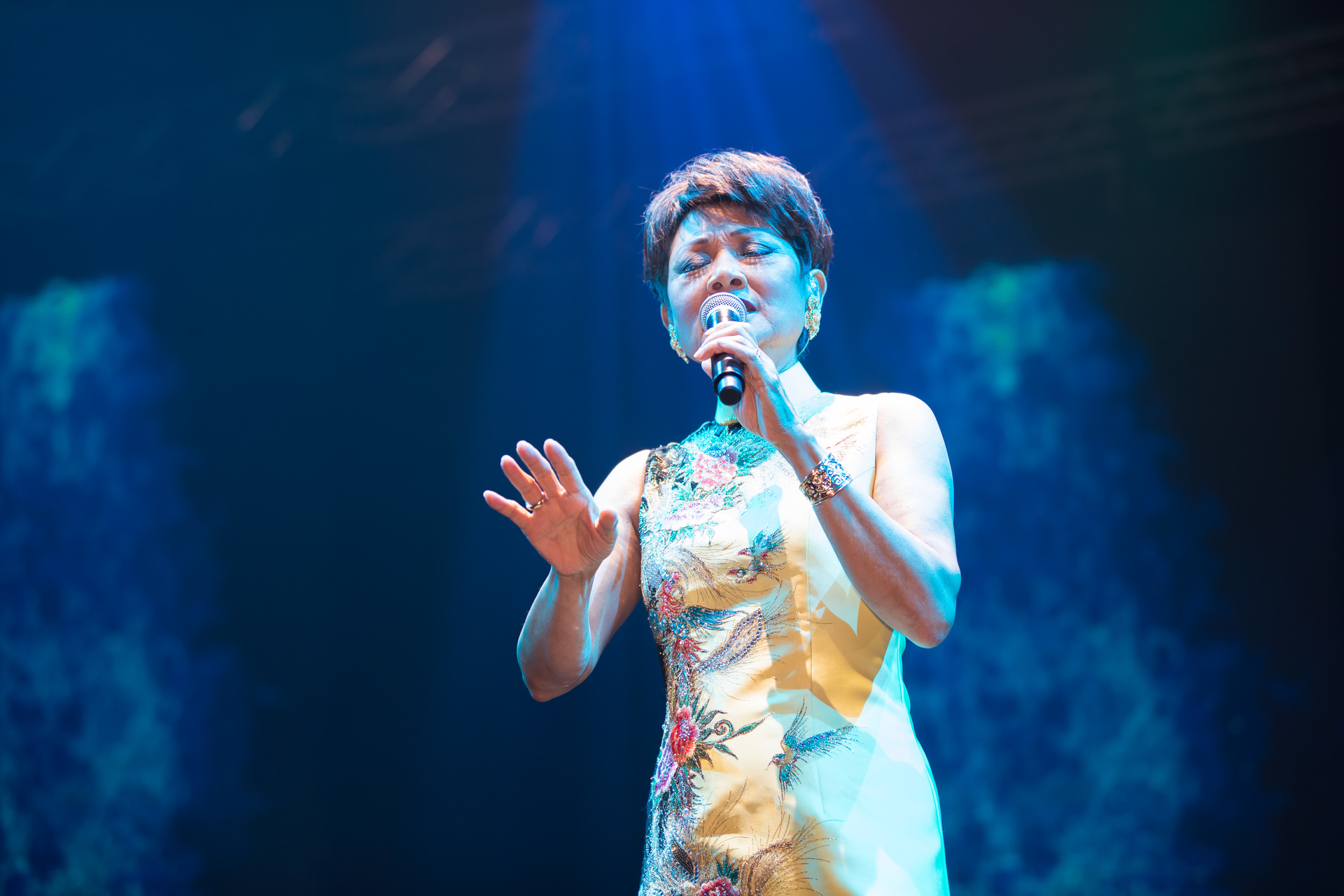 She spoke fluently in a mix of English, Mandarin and Cantonese, making efforts to translate them and ensured that audience understood her.

Frances entertained the audience with classics such as ‘午夜吉他’，’忘不了你 (Can't Forget You)’， ‘梅兰梅兰我爱你’，  ‘默默的祝福你’， ‘我的心里只有你’.  The audience sang along to her strong and captivating vocals backed by a great team of musicians, such as well-known songwriter and arranger, Anthony Lun.   Various songs that Frances performed at this concert were beautifully arranged by Anthony with a refreshing tweak. 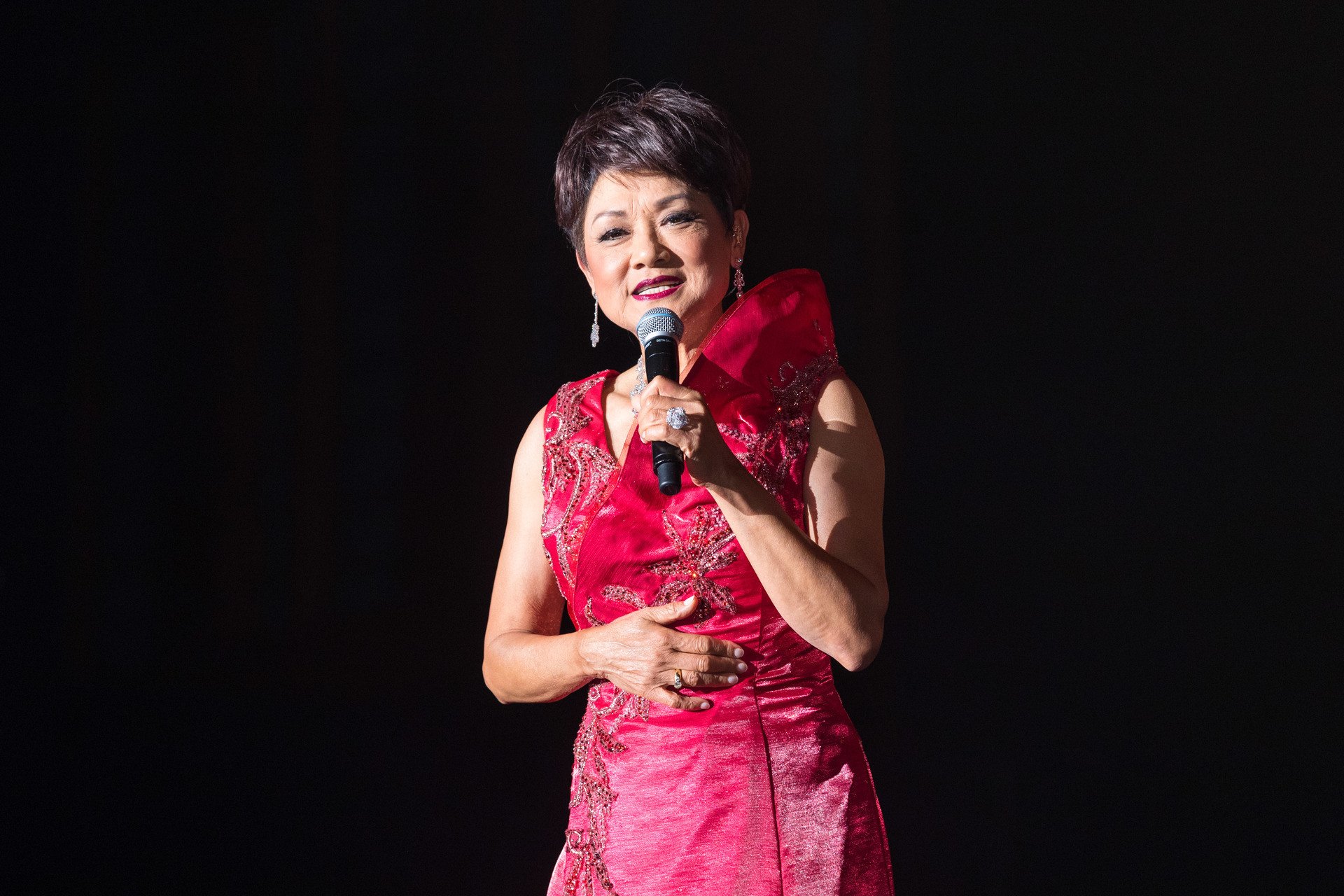 She sang Indonesian song ‘Widuri’ and delivered 3 of our very own local Malay songs to a delightful audience.  It was just so heart-warming singing ‘Di Tanjung Katong’, ‘Geylang Sipaku Geylang’ and ‘Rasa Sayang’ .

She also went on to sing Cantonese favorites such as ‘木兰花’, ‘啼笑姻缘’ and a medley from The Bund TV drama series ‘上海滩’， ‘万般情’ ，’上海滩龙虎门’ which the audience could absolutely resonate with.

1997 was a significant year in Hong Kong’s history with the handover to China and Frances was one of the presenters at the British Farewell.  It was also the year that the first musical by our own Dick Lee, 雪狼湖 Snow. Wolf. Lake, was staged at the Hong Kong Coliseum.  Frances delivered the musical’s opening song ‘爱是永恒’, originally sung by Jacky Cheung, with a different approach and this song appealed really well to the audience, especially the younger crowd! 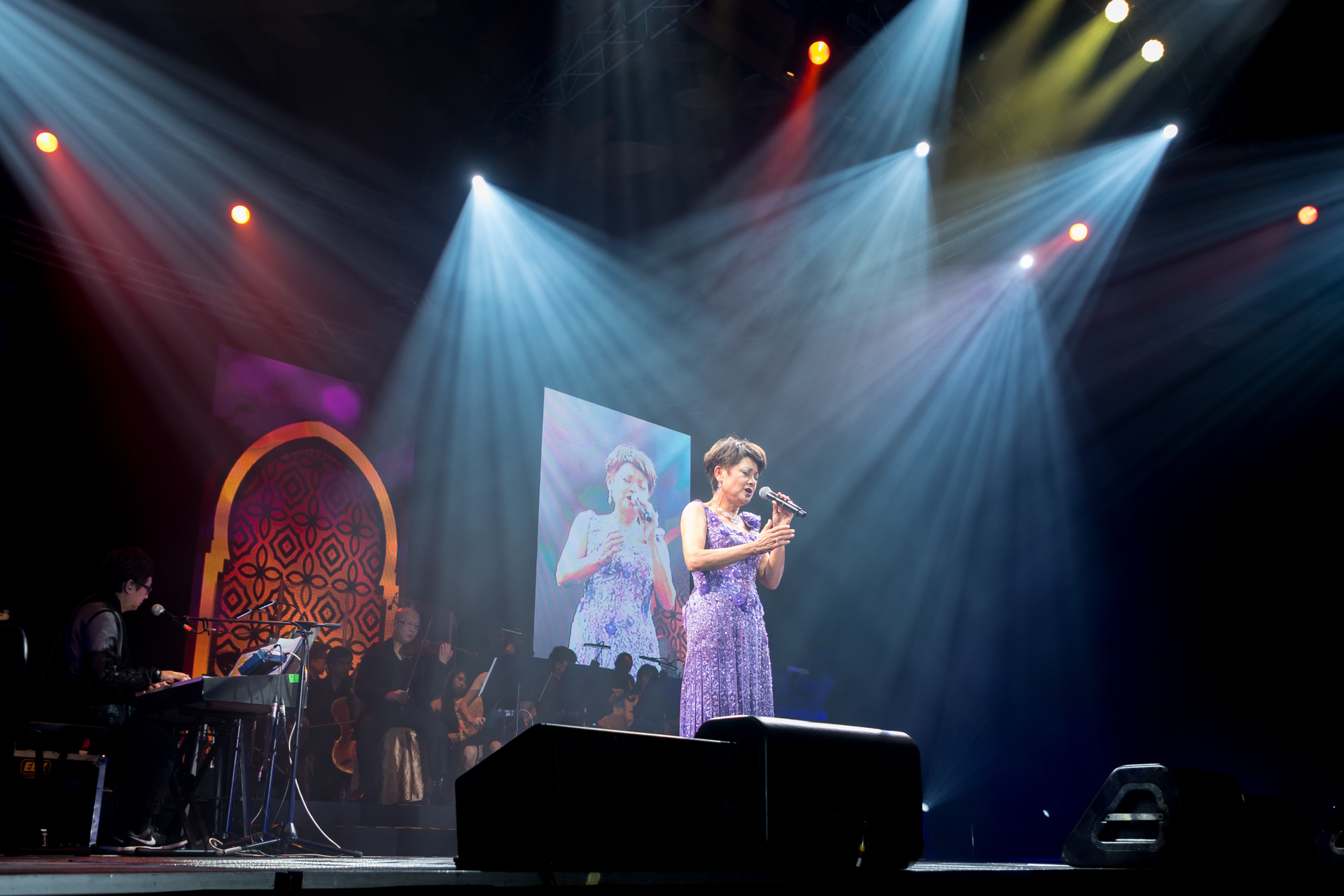 The emphasis for the concert was the importance of family, particularly how important it is to slow down and focus on the family.

In particular, it was a heart-wrenching moment as she spoke about her grandson George who had a brain tumor but has managed to survive till now.  With this she performed brilliantly the song ‘Days with George’.

Being a cancer survivor herself and with Baby George surviving till today, she counted her blessings and sang this beautiful song ‘Blessings’ to the audience. 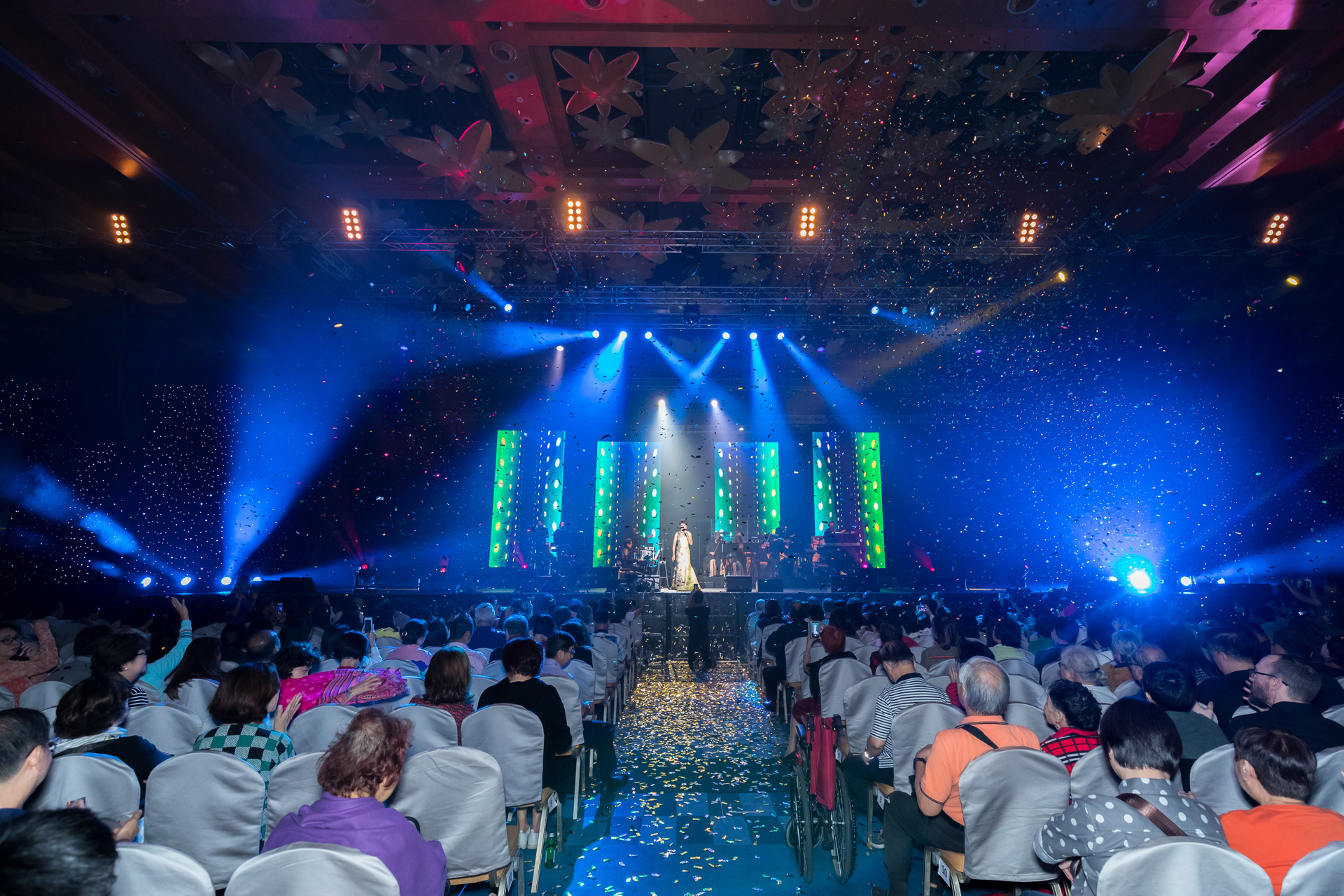 As the concert came to the end, she wondered how time flew by with her granddaughter growing up so fast.  As she sang ’时间去了哪儿’, she gave this piece of golden advice for a happy life to resounding applause from the audience:

Currently working on her next album for her 48th anniversary, which will be available digitally soon, with hardcopies out sometime in May 2018, she introduced Eric Ng, a Singaporean who has also penned songs for Sandy Lam.  This was a proud moment for all Singaporeans as Eric Ng went on stage to share his excitement on being able to work with Frances Yip on her album.  We were introduced to this new song ‘从前慢’,  the encore song for the night and the concert ended with the last song ‘显出真善美’.

A successful, meaningful and memorable concert indeed for all!

Special thanks to Red Spade Entertainment for the invite.