It isn't likely that John Mayer would simply call anyone "the best guitarist around," but Mateus Asato was personally named as such by Mayer himself back in 2017. The Japanese-Brazilian guitarist has stolen the attention of not just Mayer, but also numerous pop acts across the scene. He's shared the stage with 'Bang Bang' singer Jessie J, American singer-songwriter Tori Kelly, and most recently with Grammy Award-winner Bruno Mars in Las Vegas.

Thanks to his growing star power on Instagram, Asato's surging presence penetrates through any video, collaboration, or stage he's on. Finally, he will be mounting his first headlining concert at Scape Ground Theatre this Tuesday (07/23), following his 2017 guitar clinic in the Lion City.

Bandwagon caught up with Mateus Asato to talk about his crazy touring life with bassist Yas Nomura and drummer Chow Kiat, working with some of the biggest pop stars in the world, and how he manages his extremely coveted hair.

Can you describe a day in the touring life of Mateus Asato?

I believe this first question would’ve been more appropriated answered by my bandmates—but I’d say that I try to relax as much as possible when I am on touring mode. After these years touring with artists, I understood that this journey is made of a lot of surprises [for good or bad], so to me the more I protect my sanity the better—so I can offer my 100% on stage.

I just made a post talking about this run where I mentioned “there’s no such thing as playing music with your close friends.” Chow, Yas, and I graduated from the same school and this is where [it] all started.

Thankfully we still stayed in touch after that—and our chemistry [stayed] the same way. Friendship and music go along super well and this is a great example. I’m so thankful for having them on this—I’m a huge fan of both, and I know they are gonna reach levels beyond [anyone] expects.

Did you grow up in a musical family? If so, what traditions did you share that led you to playing guitar today?

No one in my family was a professional musician, even though I have a lot of them who played at church—including my mom.

I’ve always had the contact with music but the main encounter was when I was 9-years-old, after a cousin of mine started to play acoustic guitar—the tricks and noodles he was doing with the instrument plus the music he‘s showed me hit me right away, and everything changed since then.

Since you studied at MI, do you believe it's important for aspiring musicians to study music traditionally at school/university rather than just jumping into it, rock n' roll style?

This is a very subjective subject, but being in a music school was very important to me. The way I increase my knowledge in general is based on methods and having someone showing me the way, and I remember missing this factor in my music journey back in the days.

Being surrounded by teachers and being in a place where everything collaborates in your brain to achieve more knowledge was very inspiring to me—but of course I adapted some thoughts according to what was best to my perspective. I had a great time.

Do you feel that Instagram is still a good platform for aspiring musicians and artists to share their work on, despite the lowered reach many users are currently experiencing thanks to its algorithm?

I believe every source on social media could be useful to put your name out there if you know how to use wisely and in a creative way. According to how the way the world is going nowadays, the faster you get people’s attention, the better. Once your brain gets that point, I believe that social media could still have the power, even though I always get controversial thoughts about the essence of music x internet.

What's it like working with all these huge pop stars—particularly Bruno Mars—​​​​​​​especially since they have different sounds? Do you get to pick up fresh ideas from them to weave into your guitar work?

My music career is so privileged and blessed, honestly. With all due respect, I really think that I’ve worked with the best of the market so far.

Tori is a vocal-technique machine, Jessie has the most powerful vocals I’ve ever heard, and Bruno is by far the most versatile and complete artist I’ve ever seen. And of course the fact they are different genres [even though all pop-centered], that required fresh ideas every time. That’s why listening to all types of music is so important. You have to keep the game up because if not, they will get someone’s else. It’s hard but it’s the way it is.

You also get to collaborate with a lot of other artists (love what you did with Polyphia!). How different is it working with them than playing live with Tori Kelly and Jessie J?

Working with Polyphia was great! I love their music and respect them a lot for what they’re doing on this instrumental scene. Tim [Henson, guitarist] sent me a DM on Twitter and this is how I added my solo on 'Drown' (laughs). We never got that close after that—but we still talk sometimes. They are great and it feels like they are always searching for new sounds to keep their music fresh and authentic.

And it was very different comparing to TK and JJ—I got total freedom in terms of how to use my guitar and also we are for sure on the page. Guitar players madness (laughs)!

Any plans on releasing a full-length album or at least an EP soon?

I’m in a mood right now where I don’t remember a time where I was writing so often than nowadays. Things are flowing so nicely and I believe this will happen very soon, thankfully and finally. I’m very happy and excited.

Are there any Asian acts you look up to and gather inspiration from?

The last thing I’ve searched that related to Asia was the K-Pop fever and it got me blown away by how they achieve such success. I’ve seen a lot of great musicians [guitar players specially] from Asia on social media too.

My current favorite guitar player is Yvette Young—I am not sure if she was born in Asia, but I believe she has a related blood.

From some fans: How do you get your hair and beard to be so pretty?

I don’t wash it everyday (laughs)! Well… thankfully my genes are blessed on that—but I know for sure that my hair gets a better flow in dry weather—that’s why California is so good for my hair-life (laughs)!

Mateus Asato will perform at the Scape Ground Theatre on 23 July from 7:30pm onwards. Tickets are now on sale for $80. Get your tickets here. 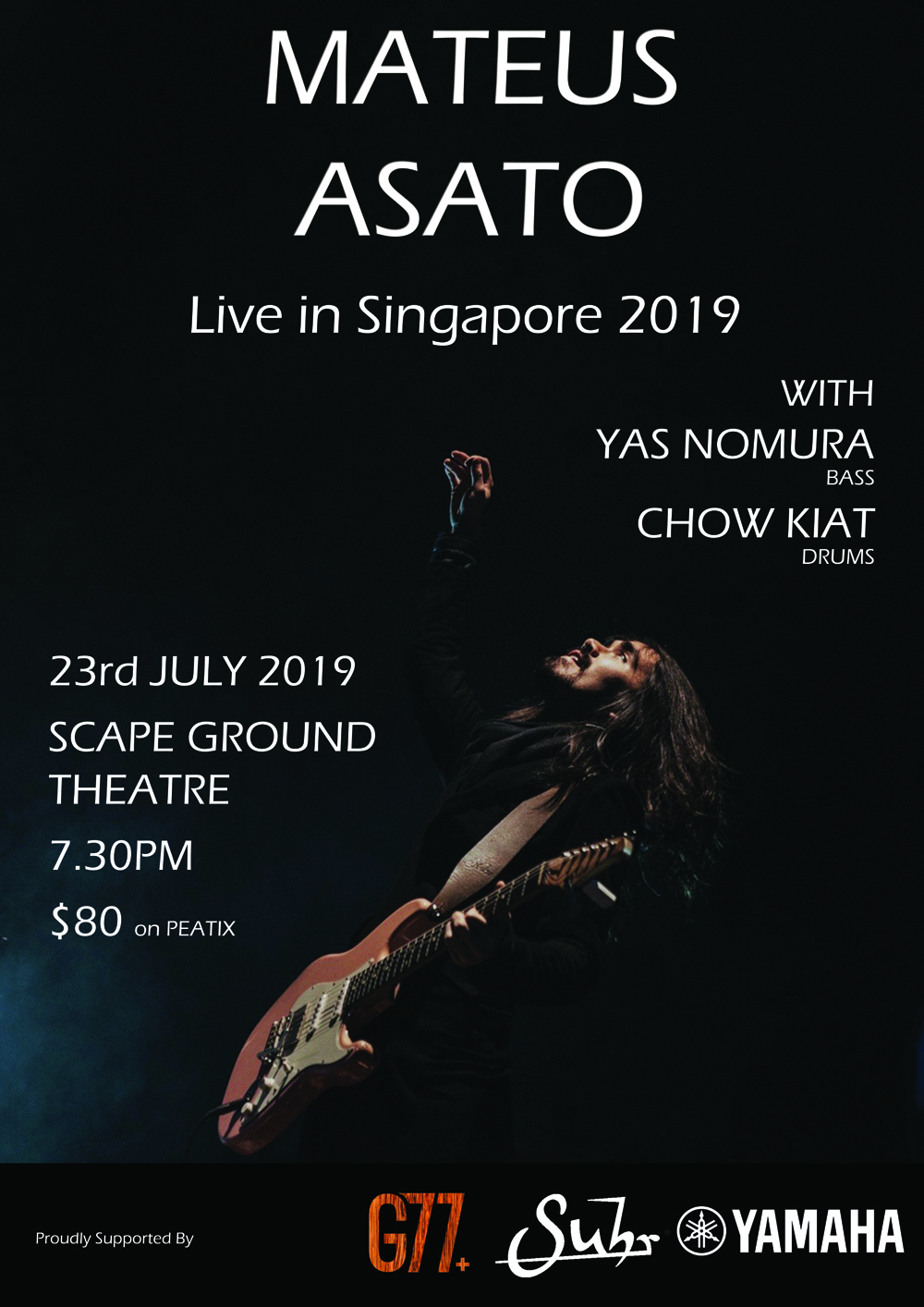