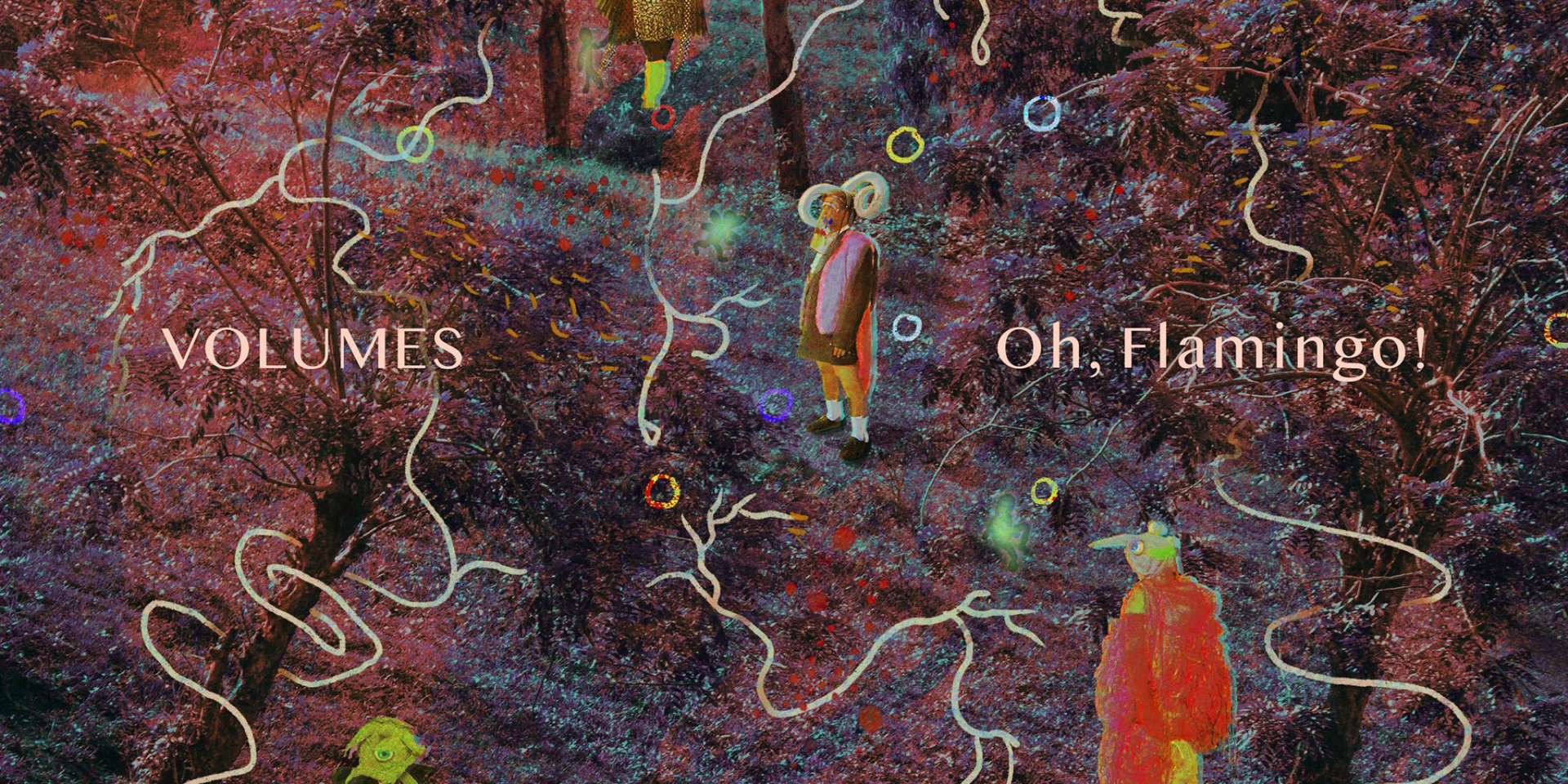 It does indeed take a whole village to create something great, and Oh, Flamingo!'s Volumes EP is no exception.

The Filipino rock quartet reached out to all sorts of talent across the local music community to collaborate and experiment on their latest offering. And considering the country's current situation, bringing this 7-track EP to life turned out to be a bigger challenge for the group. Each instrument was recorded in a different studio. Unconventional methods were certainly used.

Since the enhanced community quarantine kicked off in March, the 'Naubos Na' act scrapped initials plans for the release of Volumes EP, and turned it around for the ultimate digital experience. They took to Club Matryoshka, a Minecraft-based virtual venue for its launch last week.

"Volumes can also be a measure of space," they tell Bandwagon, revealing how they decided on the title of their sophomore effort. "The songs in this EP are snapshots of this volume of our lives, and at the same time they speak volumes of what we are going through as we dive deep into adulthood."

"I do think that we’re creatively more focused on these songs," vocalist/guitarist Howard Luistro says. "Our debut EP had that youthful energy of wanting to flaunt every weapon that we’ve got as much as we could, while on this second effort I think we’re more in control of what we want to express or articulate. There’s a lot more restraint, but I think that’s what brings these songs even further."

Bandwagon caught up with the members of Oh, Flamingo! for a rundown of every track off Volumes EP.

Pat: We aimed for it to sound dramatic yet concise. I think a lot of my influences from my college days came through on this one, post-rock bands like Tortoise and The Mercury Program.

Howard: For the original demo, I wanted to make something that started out as a contemplative whisper but eventually ripples and overflows. I think this song nicely introduces the creative impetus of the EP.

Howard: What I find interesting about sunsets is that it’s a transition from day to night that we can actually observe, and during that moment when the sun dips into the horizon, it’s a sweet spot where the light turns to gold, shadows are more striking, and people really get together to savor that moment. I think it’s a really good metaphor for treasuring moments with our loved ones. I wrote this song for my girlfriend and we are both huge Beatles fans, so that’s kind of why it has that '60s, psychedelic vibe.

Billie: It's about values, and questioning whether or not you're compromising them. It's basically a conversation with one's self. It's full of contradictions, feeling empty yet still putting an effort to continue with life anyway. We really aimed to keep the song simple. Just 2 chords. This approach is really unlike the typical Oh,Flamingo! arrangement. But I felt that the simplicity of the arrangement complements the deep introspection in the lyrics.

Howard: It’s a song about songwriting, the creative life, and the friends you meet along the way.

I was thinking a lot about gig culture, how I’d been spending a lot of time at night in gigs watching bands, playing music, and getting to know people. Those are one of the memories that stick to me the most on a personal level because that’s where I find a sense of purpose and community to what I do as a musician.

Pat: I felt the EP was too short and thought a spin on the song 'Volumes' would add depth to the EP's meaning. It was a really organic jam I'd say, we tried a collage type approach—we spent one afternoon taking turns behind the laptop and also playing video games in between. It was super chill, no-pressure kind of thing where you can contribute what you feel or want.

On another day, we asked Tim Marquez to guest on saxophone to add another layer, because I think horns generally carry a certain magic and expression that other instruments do not. The wild drums on the track are actually me and Tim going back and forth with one another. We did it in one take to preserve the spontaneous combustion.

Again, we had nothing planned really, and personally, that kind of stuff is more exciting and inspiring than going into the studio having it "all figured out". We just had an idea of how this track should make us feel, and then we strived to achieve that feeling.

Howard: This is Volumes’ F*cked Up Remix haha! We hung out at Pat’s place one afternoon to morph around with the original samples of the track and record new parts. I really loved what Lustbass did with this track. As our mixing engineer for the EP, we gave him the reins to play around with it. This twisted version of Volumes also sets the stage for the second half of the EP for the longer, weirder songs.

Pappu: The main riff for this song started out as a random guitar and keyboard jam between me and Howard.

This was at Grimmhouse Studio in Makati, while waiting for Billie and Pat to arrive. The four of us ended up using the rest of the rehearsal session developing the idea into a rough structure. I think out of all the songs in the EP, this one sounds the most "familiar" because we deliberately added elements in the song to capture that slow blues/country feel. In fact, the working title for this song was 'Bluegrass.'

Howard: When I started writing the lyrics to this song, I was in a phase where I was looking back at a lot of major stuff that happened in my life, maybe as a way to seek for wisdom or guidance as I moved on forward. I think there’s a lot to be learned every time you check back with your past, especially when you’re far from it enough that you can see things more clearly.

I really like how this song feels! The first half is a bit retrospective and tired, and it ends on a high note with a sense of resolution. I really loved what RJ Pineda (keyboards) did with this song, I think he really filled all the gaps in the arrangement that we couldn’t figure out.

Pat: The main riff was written by Howard during a bonding experience we had together. I remember that evening, Pappu kept on switching up the light bulbs in his house for some reason. White lights, yellow lights, disco lights. I guess you could say he was having a light bulb moment. Howard kept playing this psychedelic riff and he was sweating profusely. Hence, the name of the title, 'Psychedelic Sweater'. The sweater isn't an item of clothing, but a person—Howard.

Pappu: I'm not really one to play favorites but this one is my favorite song in the EP. I love how much it evolved from the time we first jammed it to today, almost two years later.

Fun fact! The guitar track used for my parts here are all clean. It’s not really how I intended it to sound but it found it interesting so I just went with it. This actually gives me a lot of incentive to look forward to performing this live!

Howard: We were seated in a circle just jamming freely and I was really taken over by the “beer house” lights Pappu had installed. That was the main prompt that led me to make the hypnotic chord progression that takes over this song. They had already gone over back to the dining table to drink but I stayed there for another hour playing the chord progression again and again as if I was hypnotized, singing softly to a recorder trying to come up with a melody for it. I really love how the ending of this song turned out, it feels like something that would be so fun to play live.

When I was writing the lyrics, I was thinking about the mental journeys that we take to expand our imagination in pursuit of creativity. The mind can be such a labyrinth and we can easily get so lost inside it. Artistic practice requires so much effort and energy that I think it’s a pretty miraculous way to use our minds, that we can create things as an outcome of us trying to understand ourselves and the world around us.

Oh, Flamingo! urge listeners to support St. Augustine Sambali Fund, Inc., one of the oldest non-profit organizations based in Zambales registered under DSWD. The charity sends scholars from Zambales to college, however during the lockdown, they have been more focused on doing food drives for the community. If the lockdown continues for longer, they will be setting up food kitchens in Iba and Botolan.