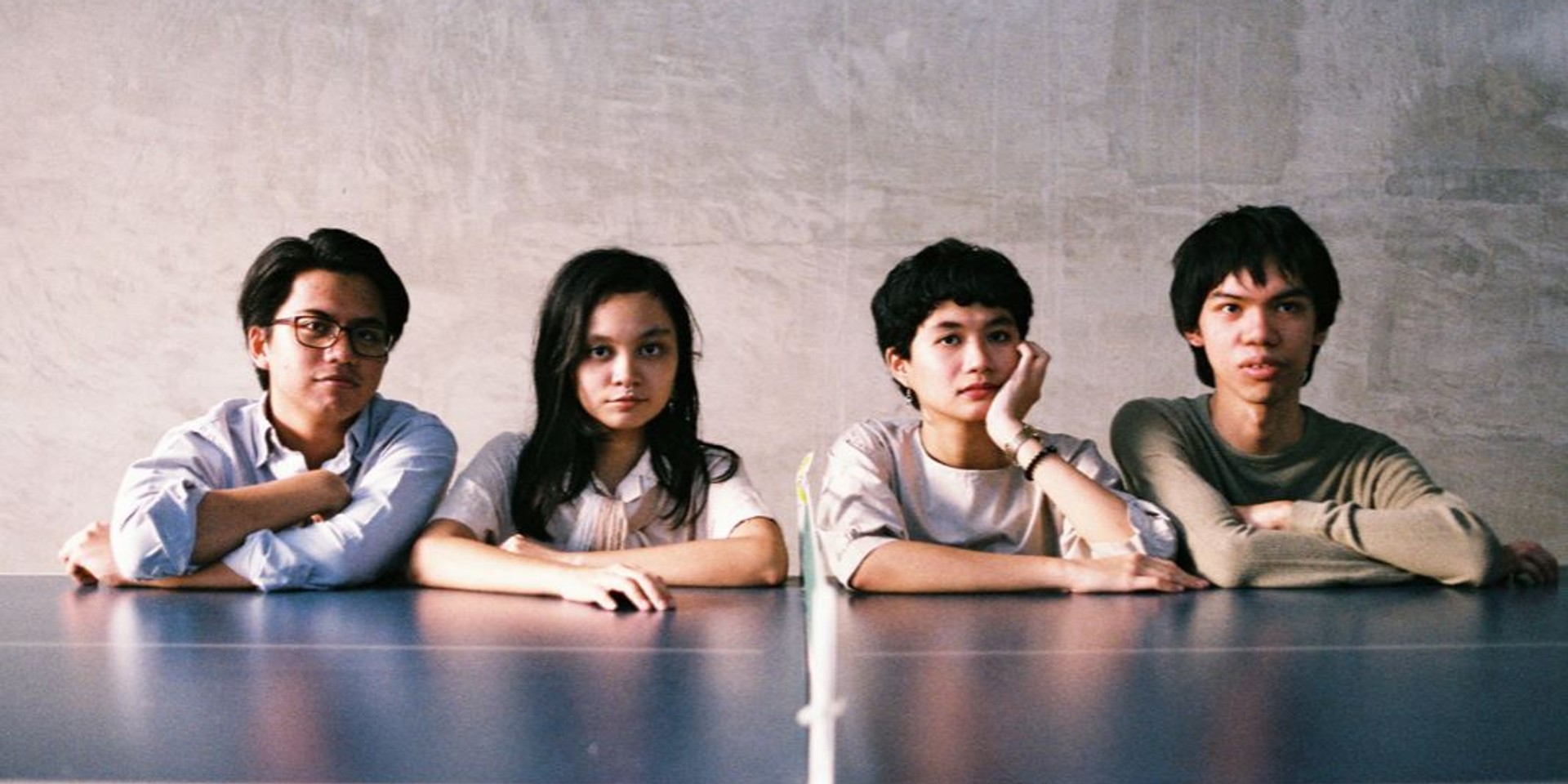 Ourselves the Elves' first full-length album Self Is Universe is an aural adventure in itself.

The 14-track offering from the Filipino folk-rock act is packed with powerful and unapologetic words and organic tones that will have you swaying and contemplating in the same space. It takes on complex themes, like empowerment and abuse, sobriety and overindulgence, and waywardness and a sense of home, to express the overall meaning of what it is to be human.

Bandwagon caught up with Ourselves the Elves and Self Is Universe producer Kean Reformado to give a track-by-track guide of the fresh album.

Akira: This was originally two songs, ‘Sariling Dwende,’ and an untitled jam piece we play live. The main riff in ‘Sariling Dwende’ is a reversed guitar track that we copy-pasted.

Paula: This is the album’s opening—an empowering battle cry. We connected this soundcheck jam we usually play since we’ve realized it has the same sound and energy, both pieces compliments one another.

Aly: As an opener, this song sums up the gist of the album, other than the last track 'Self is Universe.' Maybe this was one of the first songs I really intended to be directed to the self. I like playing this live because of its big-sound quality.

Akira: ‘Shellfish’ is the oldest song on the album, we started playing it sometime in late 2012 or early 2013. I never came up with a permanent guitar "solo" for it, and during recording I told Kean that the "solo" should be the last thing I’ll record for the album, to mark the end of the recording process. Kean and I did a fun thing where we recorded an acoustic guitar that went through a phaser and a small amp for one of the pre-choruses.

Paula: Most fun bass line to play, Alyana is such a great songwriter. I’m proud of how this song came up in the album, being the oldest one and how it changed and grew along with the band.

Ponch: I think we had maybe 2 recordings for the drum part for this track. Because at the time we were recording, our producer Kean made around three different setups for his drum set, including new mics and a snare (laughs).

Akira: Probably our heaviest song ever. I was thinking of a Mastodon song I saw on YouTube. After recording, Paula said something like “parang nagha-habulan tayo dito” regarding the instruments, but I guess it complements the words. Ponch squeals somewhere.

Kean: We got really excited about this song, and we cranked up the volume of the guitars in the studio. At first it sounded a bit too heavy, but when we recorded Aly singing it all clicked together.

Aly: Most of our songs are a bit languorous so we really wanted to have a high energy song and this was it. Definitely a favorite out of all the songs in the album.

Ponch: The only other time you’ll probably hear my voice in this record, and it’s much more subtle.

Paula: Supposedly the fun sober/unsober song, we intended for it to sound like a Mac DeMarco live show jams song but it just became a pain in the butt, the album’s problem child—to the point that we almost just don't want to put it in the album, but we decided that this song marks a point in our lives that’s important in the band’s growth. Surprisingly, people like it though so maybe it’s not such a bad thing.

Kean: Yeah, I was surprised too. Compared to the rest, it’s a pretty straightforward song. I think it’s because it sounds more like the old Elves stuff. Which is good because hopefully, it’ll help people transition into liking the newer stuff too.

Kean: I think this was my audition as a producer for the Elves (laughs).

Akira: Maybe we were listening to Sales at this point in our lives (laughs).

Paula: This song was supposed to be used as a soundtrack for a film. I wrote about my reflections towards the script and slightly based it off of experiences with my past relationships too. I remember rushing recording this whole song: Kean’s > Gig at Guijo > Kean’s, we recorded everything til late at night. I figured the bass line on the spot (which I eventually forgot and had to improvise for live shows), Aki made me listen to a Wild Nothing track for inspiration. We were huge on Sales at that time so that also inspired our production.

Aly: Yeah, we definitely wanted to go for a mixed electronic-analog sound for this one. We wanted to do something different and this was the first time we incorporated a drum machine.

Kean: We experimented in the studio on this song which actually made it really hard to mix later on—like really unconventional microphone placement. When I learned I was gonna work on the record, we had a whole talk about making it sound more “demo-ey” as opposed to something “hyped” and overproduced. In a sense, this song actually set the direction of the entire album. This and ‘Self is Universe’. Aly plays drums on this one.

Akira: Yeah, I wanted to try having a drum machine alongside real drums. Inspired by the outro of Pavement’s 'Major Leagues'.

Paula: My first time to write a bass line with my own freedom, slightly inspired Girlpool. I wanted to write a sound that is complimentary but at the same time contradicting to the melodies and lyrics of the song.

Aly: This song was part of the soundtrack for Petersen Vargas’ film 2 Cool 2 Be 4gotten. Slightly problematic because it talks about submissiveness in a relationship, one of those unspoken things.

Ponch: Our first “soundcheck” song. The sound was heavily influenced by Spoon and Sandwich’s Fat Salt and Flame.”

Aly: I’m so happy with how this song came out. Akira’s guitar lines are so good, the tone sounds as if he’s making his guitar sing and it’s just perfect.

Kean: The drums were supposed to come in the first verse, but it seemed too early. I wanted it to have a delayed payoff.

Akira: The end was just me noodling around on the guitar, wanted it to sound like a rehearsal where I didn’t know where to end. At the end we were just goofing around and being self-referential.

Paula: This is originally a one minute, one versed song from my solo project. I shared the EP to the band when I was still new, somehow they ended up really liking this even though it sounds stupid and childish. I tried to channel the original punk-ness of Indie Pop—K Recs, Beat Happening; repetitive riffs, lyrics, and of course incorporate our vibe as a band, we added something that would sound really fun, thus the outro (laughs).

Aly: Maybe this was the Velvet Underground-inspired song in the album. We really wanted it to be a bit raw and never ending, a bit jam-y and everything. The dialogue in the end is an ode to our regular pizza nights after a recording session.

Ponch: Definitely the Velvet Underground-esque track in the album. There are around 9(10?) references to our own songs, see if you if can find them all!

Akira: Kean had to go to church, so I was left alone unsupervised. Recorded as much guitars as I can, and I like how Kean trimmed it down. Always wanted to try a stuttering guitar part ala Nick Zinner or that one riff in Sandwich’s 'Buhangin.'

Kean: The song was new, so the band had to iron out the arrangement in the studio. But it was cool seeing how effective the Elves are in communicating their ideas to each other. I saw everyone’s creative input, and they’d react and change their parts based on what the others put in. It was a cycle of reactions.

Paula: We tried to channel the sound of rebirth, change. I think doing a cover of '90s Cranberries also inspired some parts of this song. Alyana should be everybody’s inspiration when it comes to songwriting.

Aly: Yes maybe this was the newest song in the album. The demo for this sounds a bit more dreamier, slightly inspired by Beck or The Flaming Lips. But it came out more raw and I’m happy with it.

Ponch: Honestly thought Aly was covering a Bob Dylan song or something the first time she played this in a jam back in 2015(?).

Paula: Simple but heavy jams. When I hear this, I see the crowd’s energy in my head: just moshing at Mow’s.

Aly: I think this song was written during a drunken episode so it’s just a series of ramblings about sobriety/drunkenness, good/evil, in the guise of one drunkard character.

Akira: We recorded this at the Bunker (now Crow’s Nest) for a compilation by Offshore Music. Pat Sarabia joined us for a percussion party at the end of the song.

Aly: This was a really fun recording session. We all did percussions together and the backup vocals were also recorded with us singing simultaneously.

Kean: Aki’s guitar lines here really set the mood. Like you wouldn’t expect it to be played that way, but it works, lalo na yung ending. Aly plays slide when the loud “Sally”s come in, and it’s so all over the place. I always smile when I hear that part.

Aly: The softest song in the album. If 'Sariling Duwende' is explicitly about empowerment, 'Sweet Sally' is more about recovery from depression, anxiety, and redemption.

Akira: I was listening the Rolling Stones during this time, so some guitar parts were inspired by that. And maybe some Steely Dan.

Kean: I see ‘Self is Universe’ and ‘Sariling Duwende’ as two ends of the album’s sonic spectrum. 'Self is Universe' sounds very small and 2D, while Duwende sounds wide and deep like a grand canyon if that makes sense. But they are also thematically similar! I agree with Paula.

Paula: Alyana is such a great songwriter.

Aly: Akira and I first recorded a demo of this song in his dad’s studio. We mostly put electronic elements, synths on top of guitars and I’m happy we kept this raw yet synth-y element to it.

Akira: We added a drum loop (from the demo) and some noises to the beginning of this song so that the intro didn’t sound too surprising

Akira: The only overdub for this song was the organ. We did everything else live.

Paula: The demo of this song was sent to me by Aly after their (my bandmates)  visit at my dad’s wake back in 2016. Never have we ever touched it or played it again until one of our friends wake last 2018, this song touches a very personal space in each in every one of us.

Ponch: I like this one. I feel like the fact that we recorded this live as a band made the recording sound all the more intimate.

Ourselves the Elves' Self Is Universe is available for purchase on their official Bandcamp page.