After four years, Phoenix are finally back on the road and out of the studio with their new album, Ti Amo.

The Grammy Award-winning French quartet are taking their Ti Amo World Tour to this part of the world, when they visit Southeast Asia once more next month. This time, the band will be making festival appearances across the region — Good Vibes Festival in Malaysia, We the Fest in Indonesia, and Summer Sonic in Japan. Phoenix is also set to make their return to Manila, with a headlining concert at the Kia Theatre on August 15.

It's been three years since their first visit and fans can't wait for them to come back and bring "summer and Italian discos" to Asia, via their Ti Amo tour. Phoenix's "own syrupy antidote to the world's ills", the album also marks the first time the band has written lyrics in a mix of French, Italian, and English, or what they refer to as du yaort (yogurt), something they've only used in recording demos - until now. 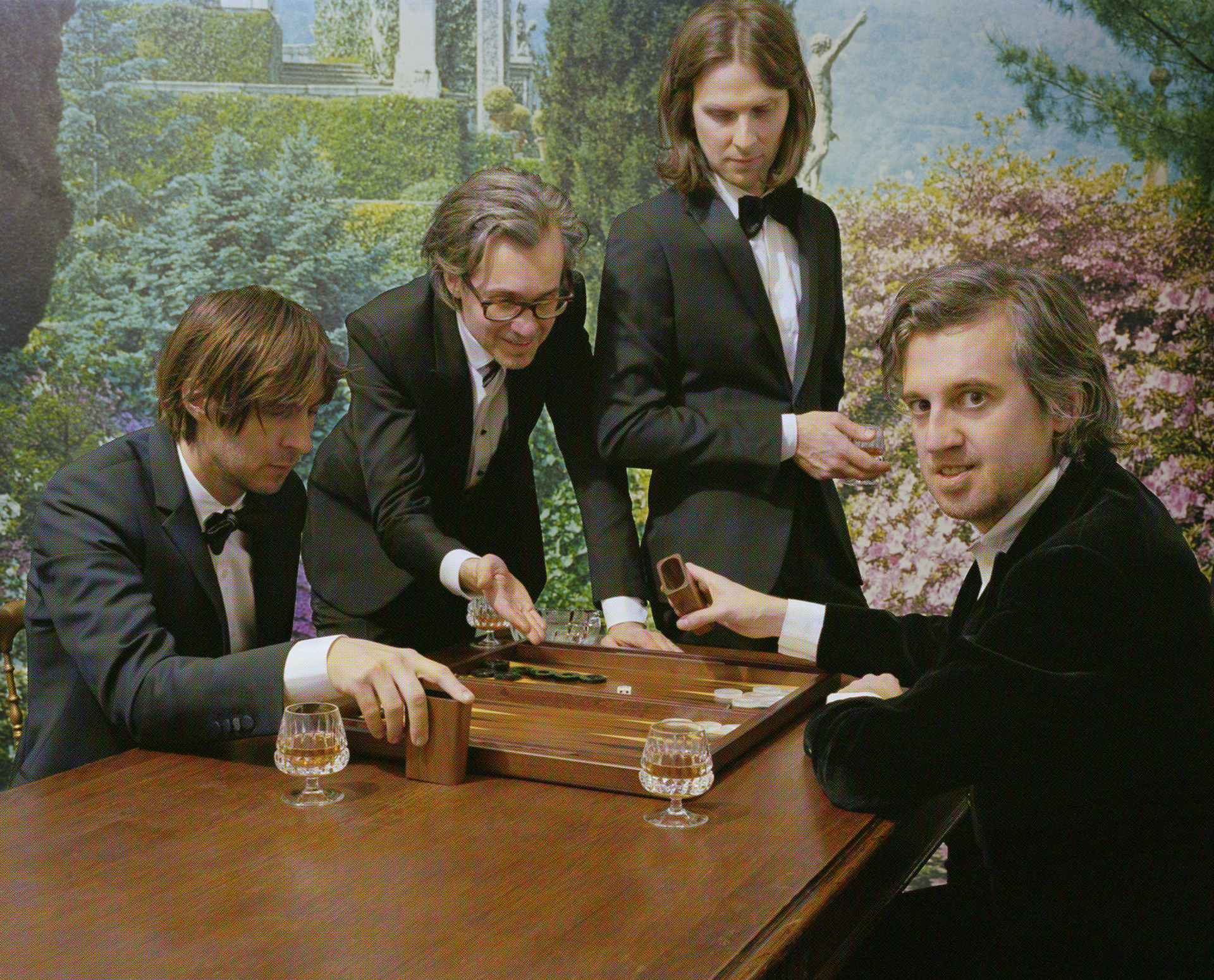 The band have stressed that they "need each other for the music to happen" and part of what has kept them together for so long is the fact that they have "very low individual skills". 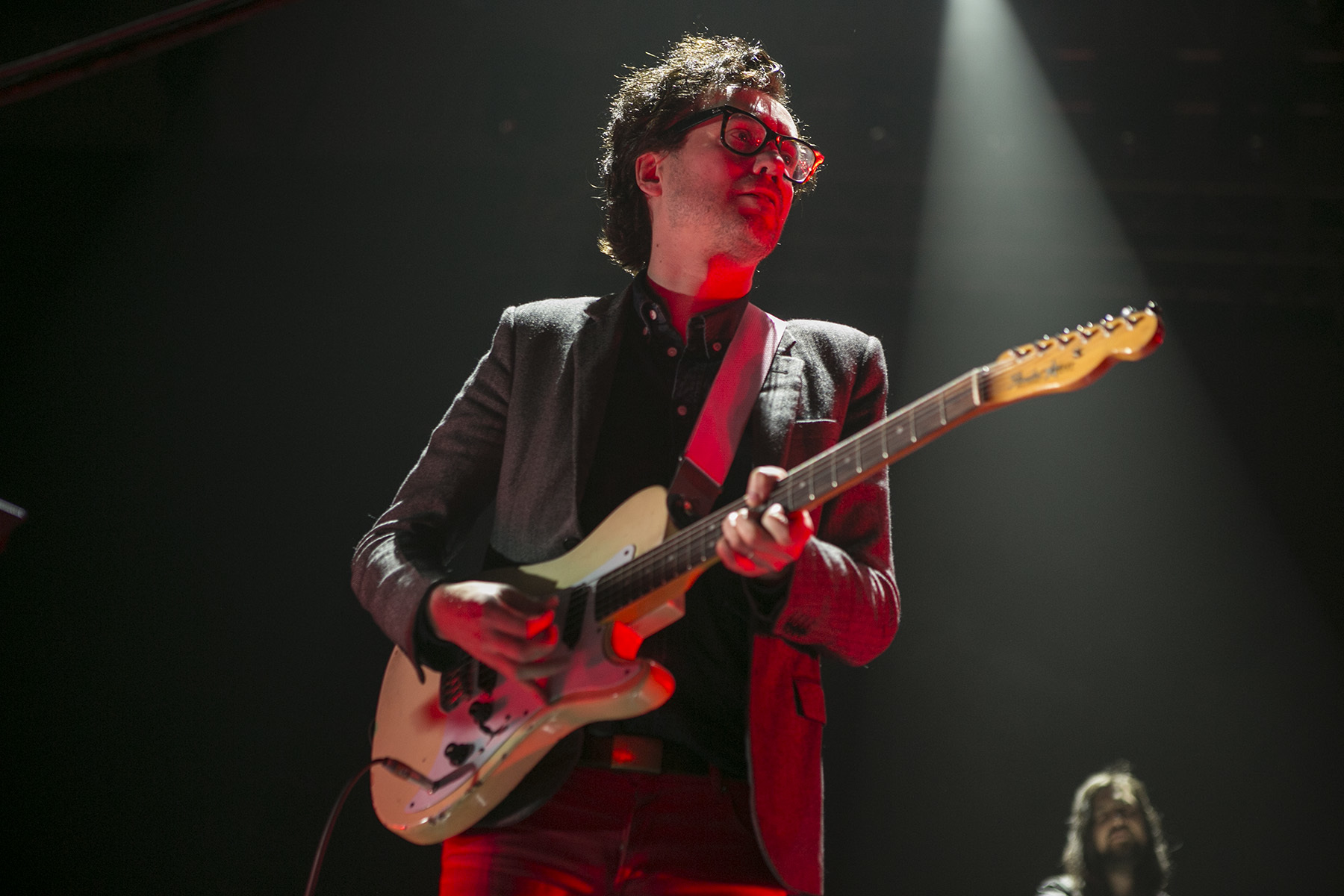 When we found music, suddenly there was a meaning and there was this unbelievable shock of emotions. [There was] also this all this science you had to learn and we did it [while] being part of a gang of friends that was very solid. And united against the rest of the world."

In almost 20 years as a band, Phoenix has toured the world, won numerous awards, scored most of Sofia Coppola's films, brought out friends Daft Punk for their sold-out Madison Square Garden concert and controversial hip-hop icon R. Kelly for their 2013 Coachella performance, and appeared in a Netflix Christmas special with Bill Murray.

We had a conversation with Laurent 'Branco' Brancowitz over the 'Telefono' about making the new record with his best friends, their new amazing set design for their ongoing world tour, and defying boredom as teenagers in Versailles with music.

Hi Branco. This is Ginny from Bandwagon Philippines. Thank you for agreeing to do this interview with us today! It's still morning there, right?

Yes, hi! It's just before lunch, so yes! (We were talking to Branco who was on break in Paris, the band has a rule of "two weeks on, two weeks off" during tour season.) 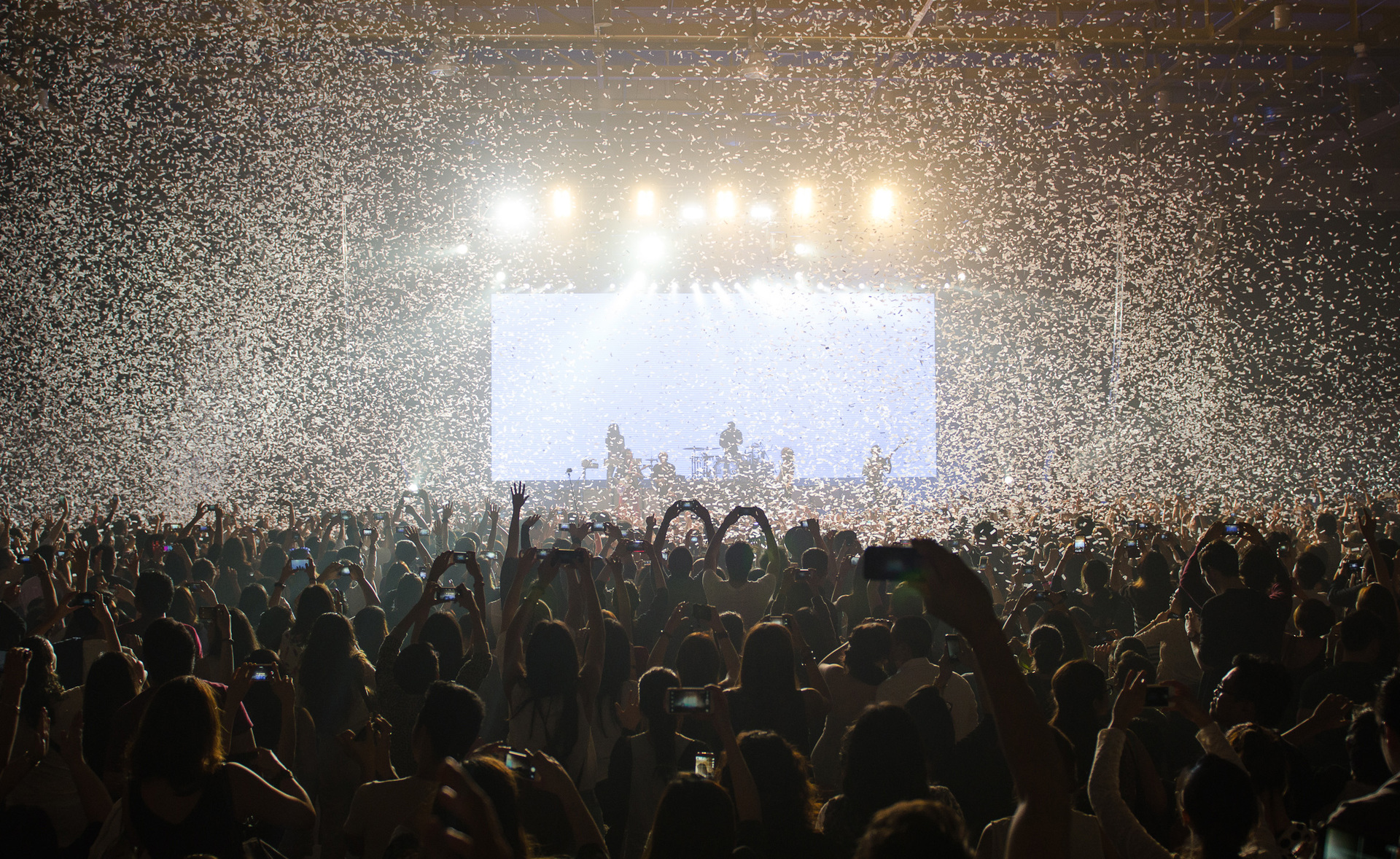 You first came to Manila in 2014. What do you remember about the city and what would you like to explore next?

Last time, we’ve been in the Philippines, we had a lot of, we met a lot of really nice people that we really want to meet again. We discovered the city a bit. One of the best things about touring is that we can be introduced to a city and a country the best way - its people. So that’s what we want to do again. We already have contacts with our friends there, and I’m sure it’s gonna be nice.

Did your friends say if there are any specific places they want to take you to?

I don't know yet, but we will see when we get there, for sure!

We're quite pumped to see you and we've gotten a glimpse of your set design online. It looks amazing. The vending “merchine” looks particularly cool. Will you be bringing that on tour here in Asia?

Well, I really hope so. You know, we have a big problem with it. It’s [very] heavy. We are trying to find a box that is very solid, so we can put it in a cargo. So if you want to know everything, you know we are like a little circus. Phoenix is like a little circus, so we have to take all those very heavy elephants…

READ: I met Phoenix and ended up on their Instagram

Your process is very rigorous and it involves long hours — resulting to, as you said in one other interview, 5000 stems. (Archived by Chris) How do you, as a band, decide which songs end up in the final album? Because in many ways, with so many choices, this album could’ve been something else.

It’s a very long process of evolution. Only the strong ideas that can make it through all those — through these very long periods of tests, only the ideas that are strong enough, they survive.

If only the song and the emotions are strong enough after long hours of work, the ideas, they make it on the album. But it’s a very long process and sometimes, at the very last minute, a song that we thought was great, we’ll discover that we don’t like it anymore. And so, just on the verge of being released, it’s sent to the trash [can]. That happens a lot, it’s very sad but that’s the way it is. 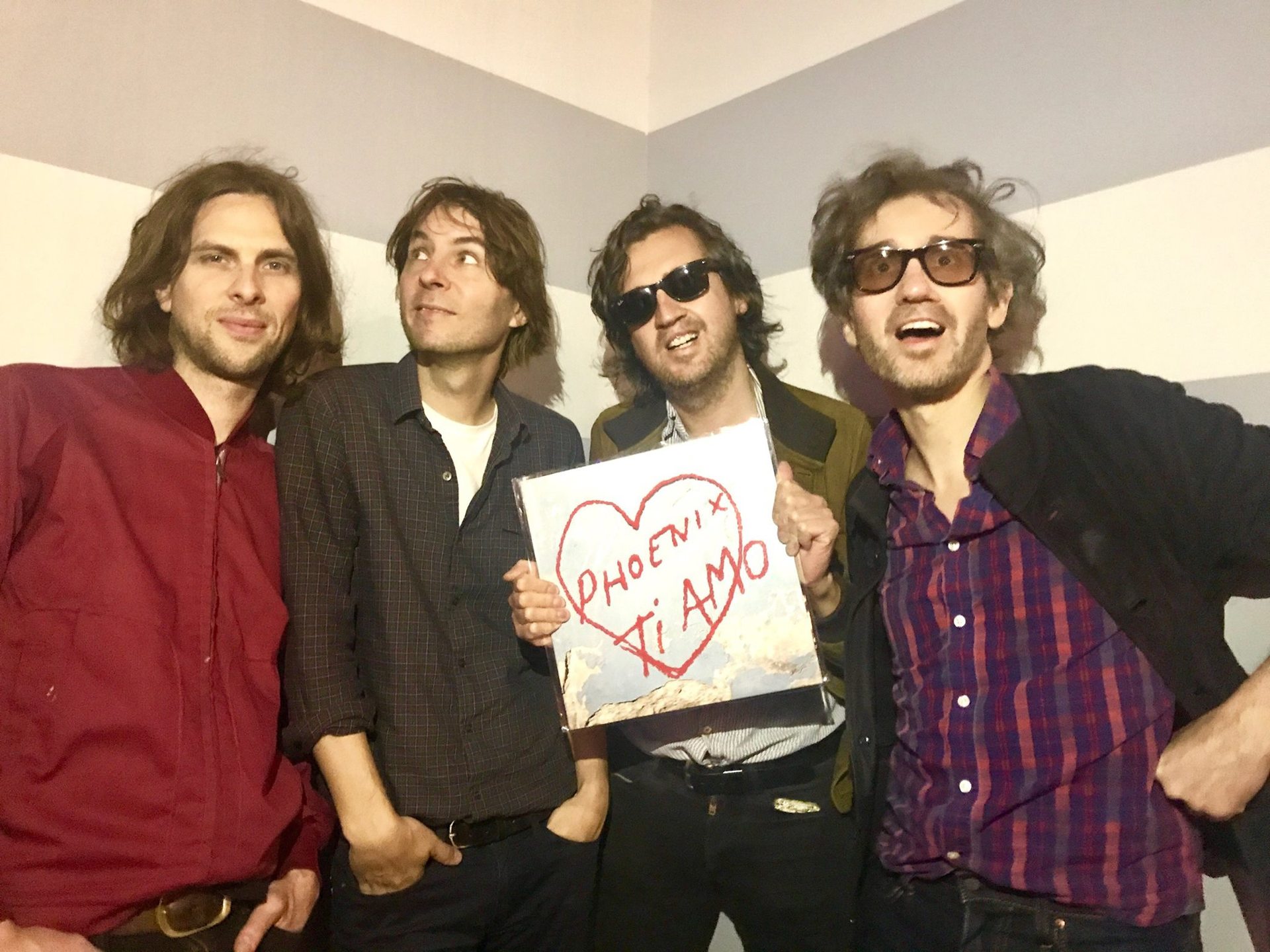 So, a lot of factors affect your decision-making process. In the end, even an impulsive feeling can change that as well? Did I get that right?

Yes! The only compass we have in all the decisions is [in] our hearts, emotions. If we feel it, if we feel it there it's strong we know it's good you know. We know when in songwriting, it's also a science so there's a lot of brain involved, but in the end, it's heart that makes these decisions.

Let's talk about Ti Amo. The world was an entirely different place in 2014, when you first began writing it. How does an album like this reflect the changing times and the kind of environment we’re living now in 2017?

The world is changing a lot right now, sure, the world is changing. But in the end, it’s also always the same. It's always been. I think what we want to communicate in this album is the fact that there is hope, and that this hope is the pure innocence, pure feeling. We can survive on this. So I think this album is based on this idea of, a naive idea of, a naive hope that simple feeling like love and friendship. They can make it all change.

You’ve said in numerous interviews before that growing up in Versailles was both beautiful and boring. How do you relate the concept of boredom to creativity?

It was a very strong motivator because we really didn’t have anything to do when we were kids. And when we found music, suddenly there was a meaning and there was this unbelievable shock of emotions, and also this is all this science you had to learn and we did it being part of a gang of friends that was very solid. And united against the rest of the world.

So all of this it was a very life-changing moment for us. Where suddenly it all makes sense. And we found like a family, we found a discipline, we found a goal in our lives. So all this it happened through music and in a way, thanks to the very strong feeling about them and of alienation we felt when we were kids. Living in this French city that is Versailles.

Thank you, Branco, for doing this interview with us!

Thank you so much! I hope to see you very soon — in August! Bye bye! Take care!

Phoenix Live in Manila is happening on August 15, 2017 at the Kia Theatre. Get tickets here.

The band will also be performing at Good Vibes Festival just before their Manila date, happening on August 13th at Gohtong Jaya, Genting Highlands. Get tickets here.

Special thanks to Karpos Multimedia for setting up the interview!