Joey Ayala stands outside Saguijo, just within sniffing distance of the toilet area festooned with indie band stickers, graffiti, and posters. He has played all over the country and world; in the Greater Manila area he usually plays his world-wise songs interlaced with wisdom and cheeky wit at 70s Bistro or Conspiracy Bar in Quezon City. Tonight though, the scene is akin to say, Bob Dylan hanging out in CBGB’s, or Gandalf loitering in a mall (well okay, cosplayers may have done the latter but you get the idea). It’s not wrong; it just appears surreal. But then again, there is a mosaic portrait of the Virgin Mary on one of the walls where many an inebriated head found rest…

He asks, “We did play here once… didn’t we? Weren’t you playing with me, ten years ago…” I pause and recall all the exhilirating gigs with his band, but not here; I wasn’t part of his group in the mid-2000s. “You have played here often? How many times?” I tell him yep, with at least three loud electric bands and a few projects. Ayala is on unfamiliar territory, geographically and scenically. I am not alone in feeling that having him in the bar is an intriguing idea: he says he talked to some people in the audience who live in QC and watch him there but made it a point to travel to Makati.

Meanwhile, Bullet Dumas, arguably one of his progenies, is delivering a set that is in equal parts feral and transcendent, with primal guitar strums and idiosyncratic but melodic singing.  On the second floor, a guitar shredder is testing boutique guitar pedals in Rockstore Manila. 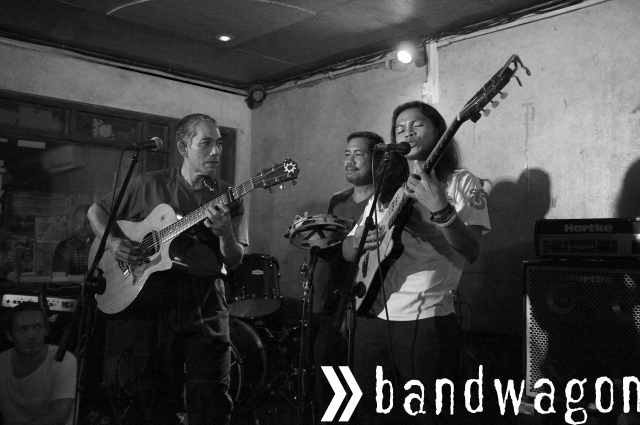 Dumas’ set over, Ayala straps on his acoustic guitar and addresses the full house. There is a handful of older folks, but most of the people are Dumas’ generation/Saguijo regulars and they are seated on the floor as they did during Bullet’s set. “Waaawww!” says Ayala with his familiar wide toothy grin. “Ang babata ninyo! Children on the floor… Am in a nursery?” he continues, laughing. In truth, Ayala is an educator disguised as, for lack of a better word, an entertainer… and aren’t the best teachers such? He covers the entire spectrum of enlightened socio-cultural perspectives and anybody who came in curious left as a fan. History ('1896'), romance ('Walang Hanggang Paalam'), and even walking ('Maglakad' enhanced with funny animal noises) are equal in his palette, tied together with his versatile guitar playing which is sometimes tastefully coloured by a decidedly high-tech Line six effects box. Later, he plays the instrument most identified with his persona: a two-stringed hegalong on which he absolutely shreds (and even then, he reveals that there are techniques he became belatedly aware of and is working on). 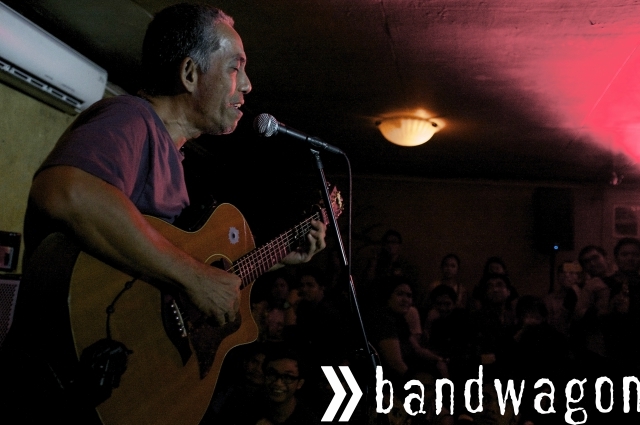 The next night, Saguijo celebrated its 11th year anniversary with performances from UpDharmaDown, Sandwich, Imago, Fools and Foes, and many others who consider the beloved bar as familiar as their own homes. It’s tempting then to call the celebration an extended “business as usual” night populated by indie kids and the Dumas/Ayala gig as an off-kilter oddity, but to do so is off-the-mark. (Dumas is a familiar face in both Conspiracy and Saguijo). It is quite an achievement: 11 years operating within Makati is no easy business feat. Saguijo has always served up alternative music (and good food); practically any familiar name alt artist has played and indeed grew up in its environs. Tucked in a residential area, it generally feels safe. If the bar itself is filled, patrons hang out by the parking lots, or along the namesake street snacking on barbecues from a nearby store or the occasional balut vendor and mobile squid ball cart. It’s the embodiment of the fantasy of having a rock club in your neighbourhood (even if it isn’t literally your neighbourhood). The occasional over-spilling crowds (say, the wildly successful “Bgy Tibay” gigs) and decibel levels on particularly loud nights have, however, probably resulted in a 2:30 AM shut down imposed by the village. But Saguijo remains as homey as it always has, with a familiar doorman named Kuya Pete who is always ready to offer a witty remark. 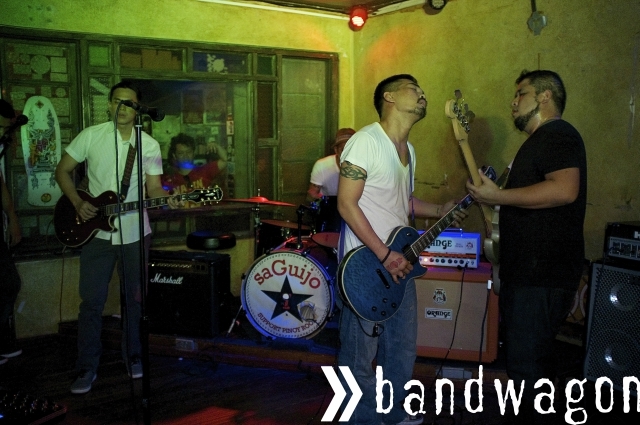 When Joey Ayala entered (or infiltrated?) mainstream consciousness with his multi-lingual amalgam of folk, rock, and indigenous music, he seemed at odds with the glammed up, glossy pop productions of the late '80s and early '90s. He was (and still is) “alternative” and, in the truest sense of the word, fiercely independent. The idea of him playing in Saguijo, the novel “incongruity” of it, is really superficial. Saguijo’s openness compliments his own, and for one night (or maybe two, including his one other performance here a decade ago), the alt-music bar indie kids call home became a classroom with a highly respected visiting professor. In Saguijo’s history, maybe it’s a once-in-a-decade event… but hopefully will occur with more frequency.