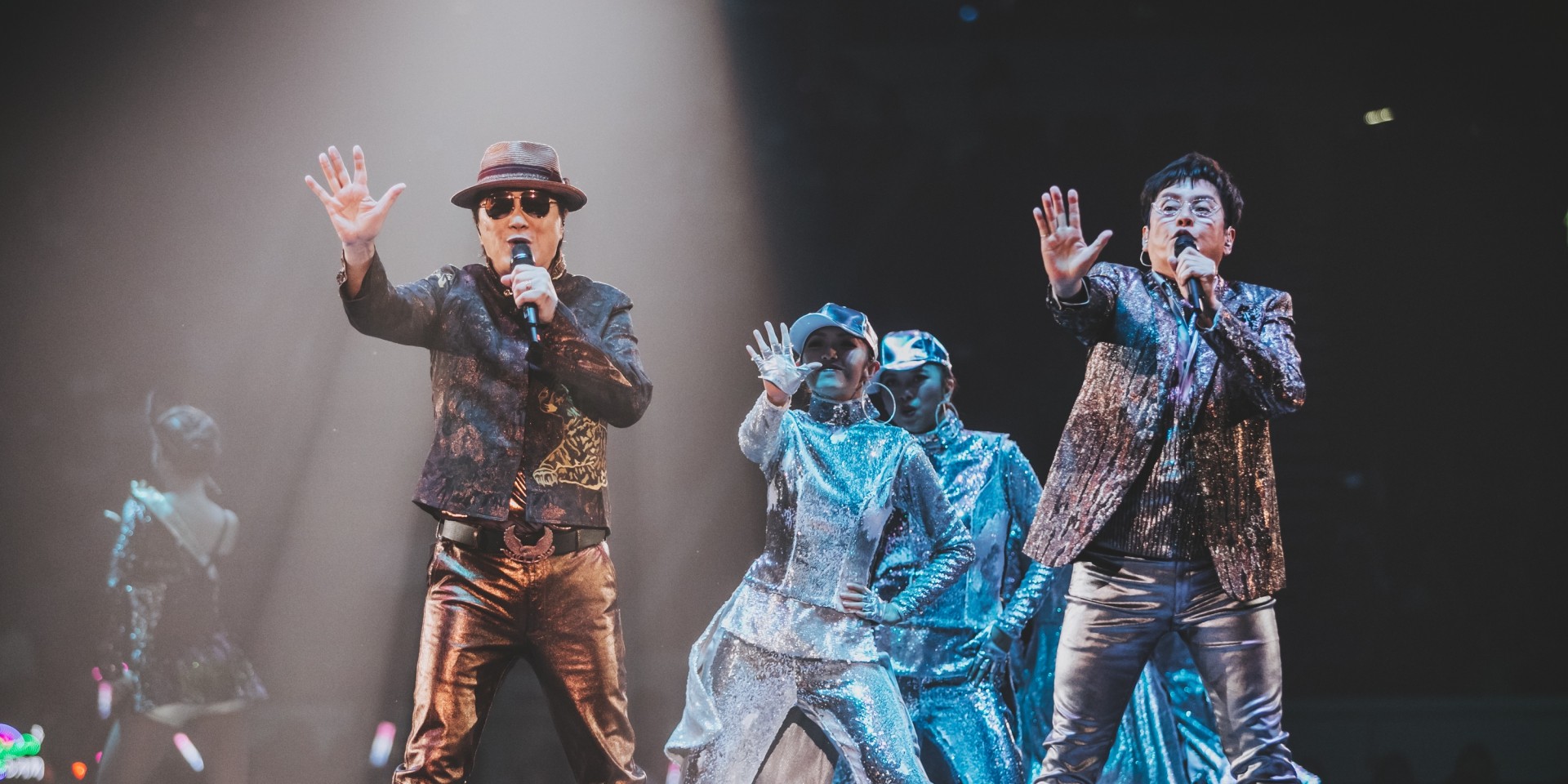 Age is just a number, and it was proven once again by two legends of Hong Kong Cantopop Music.

One of them is 70 years old (Sam Hui with more than 23 albums) while the other is 68 years old (Alan Tam who has written more than 800 songs).  Both of them delivered an amazing concert that all of us were eagerly waiting for.

It was full-house at the Singapore Indoor Stadium on 1 December 2018.   The audience sang along to the famous classics that we all grew up with.  Mostly in their 40s and above, we also saw young adults accompanying their aged parents to watch this concert. These songs are very much part of our generation, perhaps our growing up years or adulthood – mostly very popular in the 1970s. Cantopop has seen been through a bit of a revolution and faced some challenges but somehow, the good old songs are still evergreen. 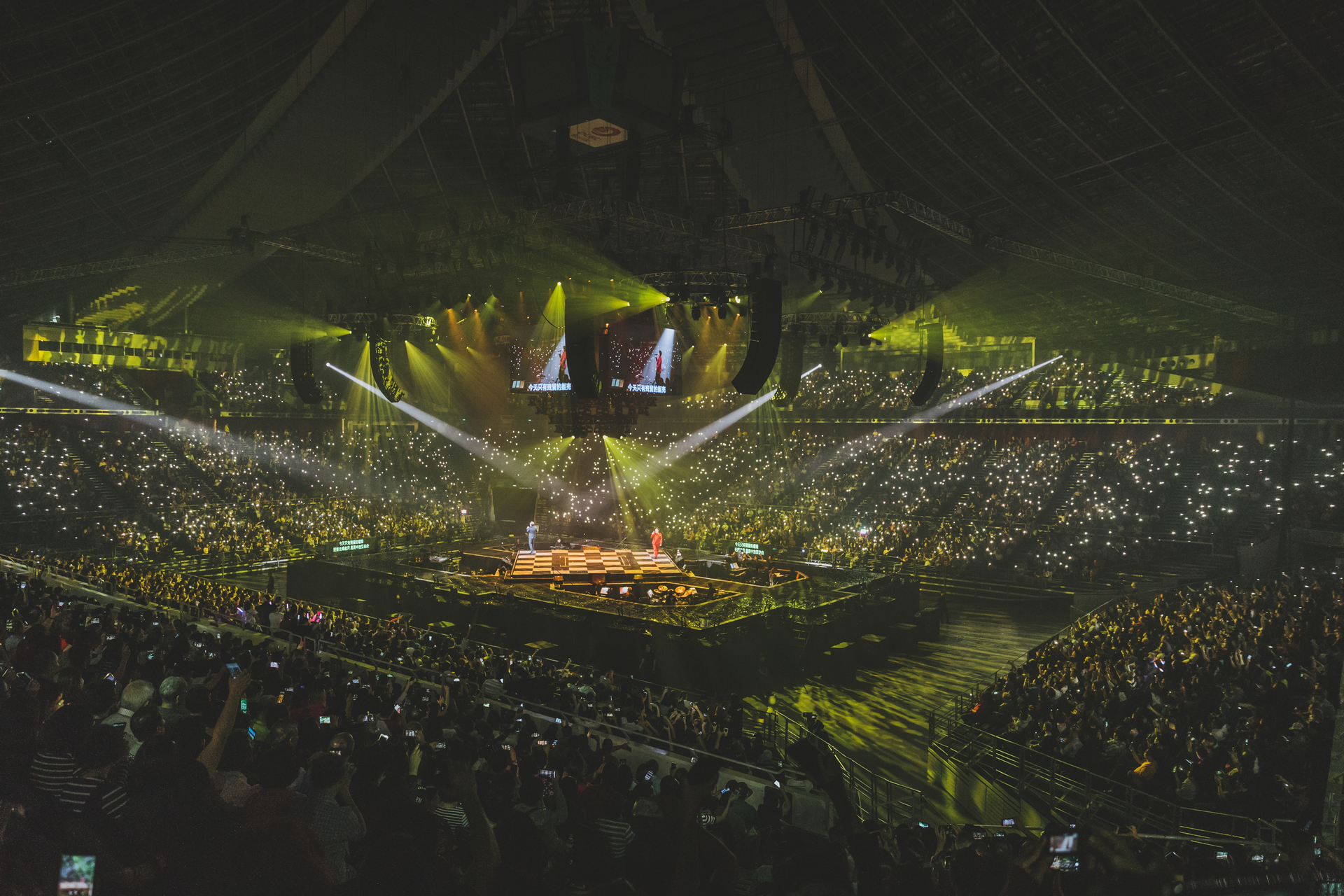 As we entered the venue, we immediately noticed the standard stage setup right in the centre of the stadium, very much like what we watched at the Hong Kong Coliseum where the singers staged their concerts.  This is one of the best stage designs as audience from all sides were able to capture a good view of the singers on stage, for whom it was a good way to engage with the audience.

Very interestingly, the stage was designed as a chessboard as the center. 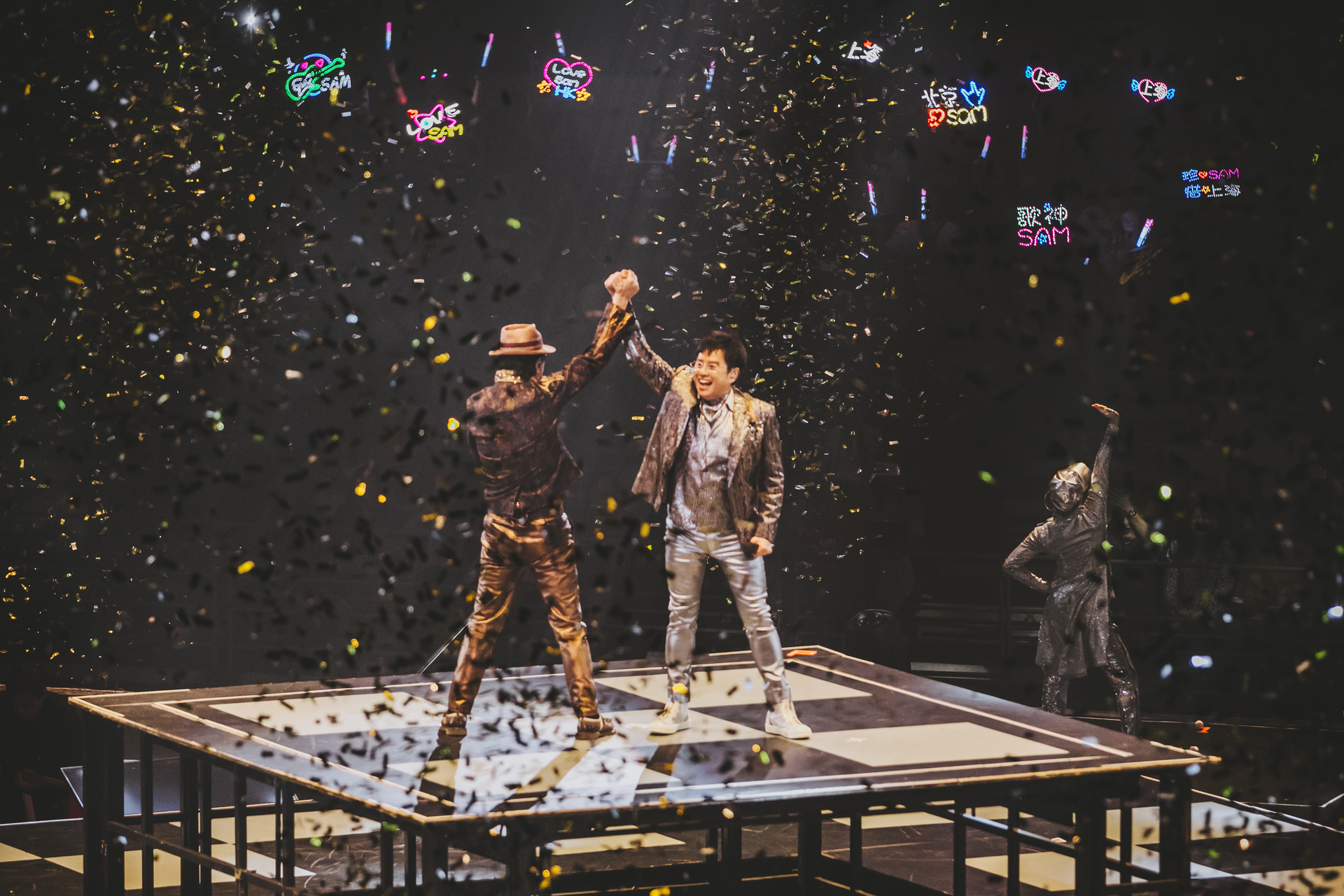 Sam and Alan both greeted the audience and performed a dance medley of their best hits, starting with Sam’s best hit song ‘The Perfect Match’ (最佳拍档).  This was a  good start as both are now great partners. This song was a popular theme song written and sang by Sam for the 1982 action comedy film ‘Aces Goes Places’ which Sam also starred in it.  The music arrangement was lively with lots of fun elements. It seemed like walking down memory lane, with the comical movie scenes coming into the mind.

Both the singers performed a medley of lively songs ‘Amazing Life’ (笑看人生), Alan’s song and‘Just Play’ (最紧要好玩), Sam’s song. The audience was deeply impressed with both of them for their high energy and stamina, despite their age. They danced on stage to greet their fans from all corners as they sang! Their vocals were still clear and powerful, from the start to the end. 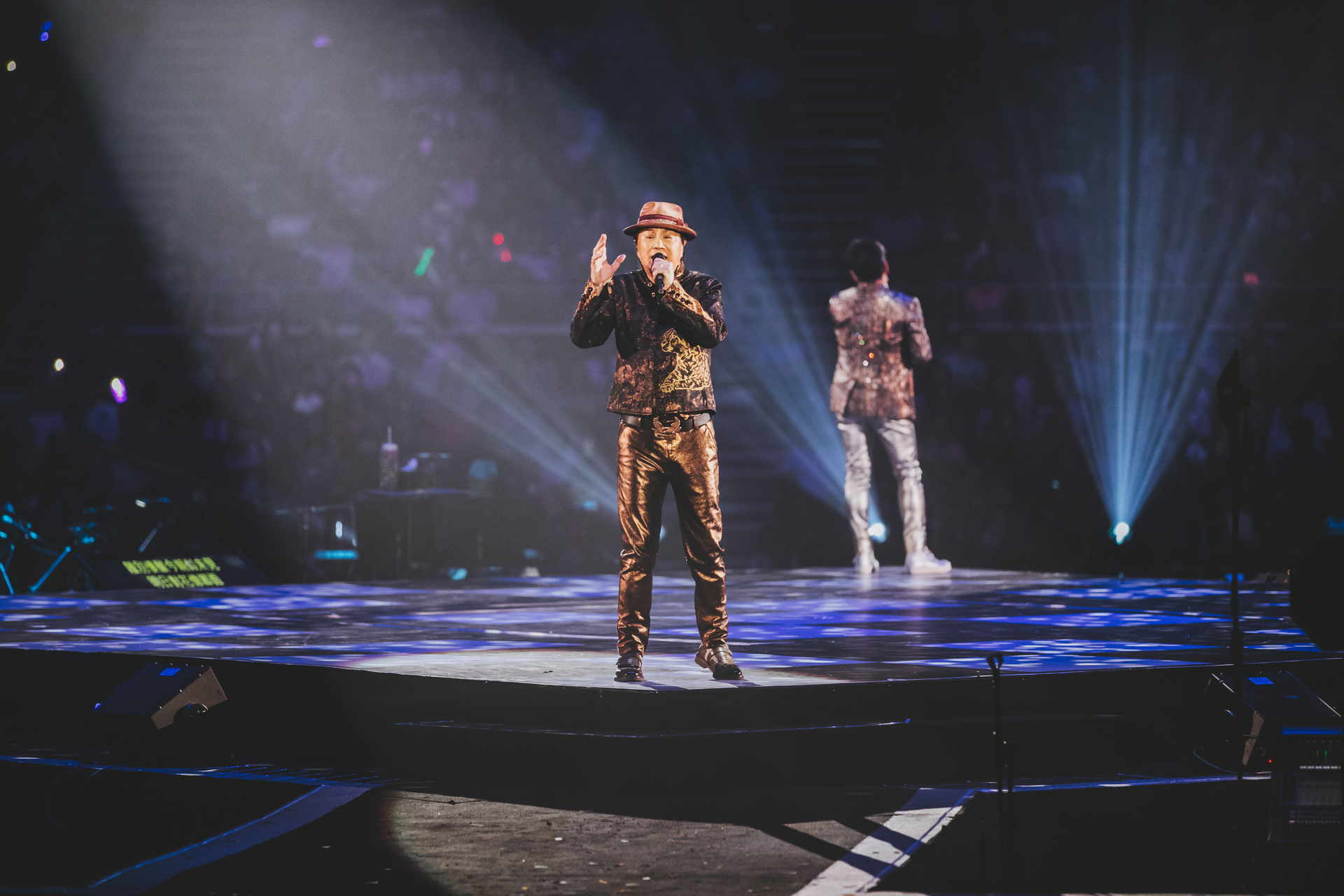 The two veterans engaged the fans totally right from the start with an interesting Opening Talk and got the audience to participate in a tongue twister. Alan mentioned that the night’s concert would be like a ‘Shopping Trip for Golden Songs’ as both of them have many classic songs.  Both singers started with their own bands, Alan (The Wynners) and Sam (Lotus).  Lots of songs under their belts!

The whole concert was also full of humor as Sam said, both of them are still handsome men.  However, there is competition from the new generation of handsome young singers (referred to as Fresh Meat in Mandarin and fresh meat rots easily).  The two veterans emphasized they are however long-lasting just like luncheon meat, ready to be eaten anytime, greatly amusing the audience.

Both singers went on to perform their hit songs which the audience was familiar with  双星情歌 (Love Song)  and 爱是这样甜 (Sweet Love).

The audience basked in the songs as if travelling back in time to the nostalgic music era from the ‘70s to ‘80s.  The most beautiful songs of all time are songs from the 60s and ‘70s.  That was the craze of popular Western songs.  Sam and Alan popularized Cantopop with covers of English songs in a mix of both English and Cantonese. This appealed to fans of that time who were influenced by Western cultures.

Both singers sang some of these Western-infused songs such as ‘Just a Little’ (等玉人),  ‘Crying in the Rain’ (哭泣风雨间) – truly evergreen classics! Great chemistry between them indeed, blending their voices harmoniously!  And everyone sang along to ‘All Out of Love’ (小风波) . 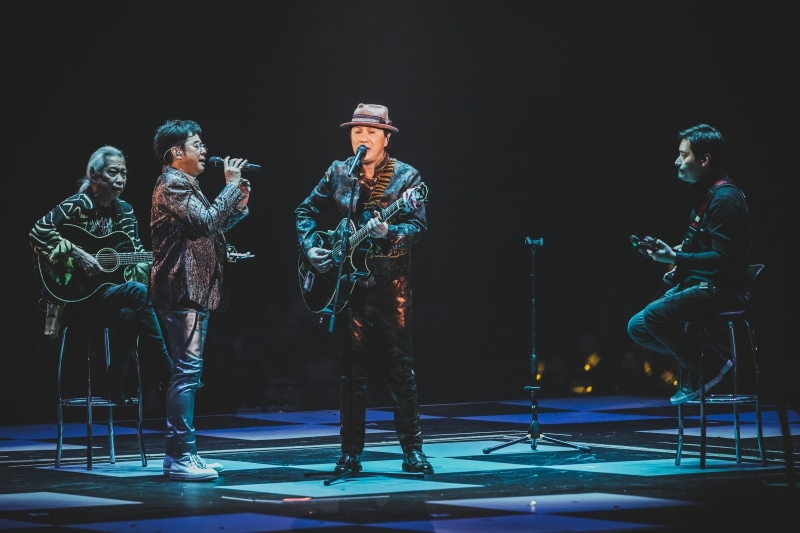 In between different segments as the singers did their wardrobe changes,  the big screen showed an interesting and humorous talk show ‘Entertainment Secrets Unveiled’ (乐坛解密 hosted by famous standup comedian and actor, Dayo Wong  (黄子华)  who spoke about each veteran’s music journey, ‘unveiling their secrets’ in a really comical way, but in fact these are open secrets that we love to reminisce and as fans we are proud of their contributions to the Cantopop music scene.

Sam Hui is widely regarded as the  ‘God of Music’.  The meaning of ‘God’ is creating from nothing to something.  Sam is the creator of Cantopop. Jokingly, Dayo said that Sam started singing Cantonese song but they were ‘not popular’.   Sam has a unique way of creating his songs based on the lives of people during that time that really appeals to their hearts, reflecting their sorrows and happiness in his Cantonese lyrics such as 半斤八两 。 Because Sam is a graduate and he is very popular, he has revolutionized  and lifted the image of the Cantopop scene – Cantopop was made popular by Sam, the God of Music.

Sam was back on stage for his solo segment singing and dancing with the dancers dressed in beautiful, vibrant costumes, brightening the stage and atmosphere instantly!    He belted out  his fast numbers  effortlessly as ‘Pretty Woman’ , ‘Mary’ (玛丽， 我好钟意你)， ‘Kawaii’ (日本娃娃)，’Ten Girls’ (十个女仔) unspooled to the audience’s delight! 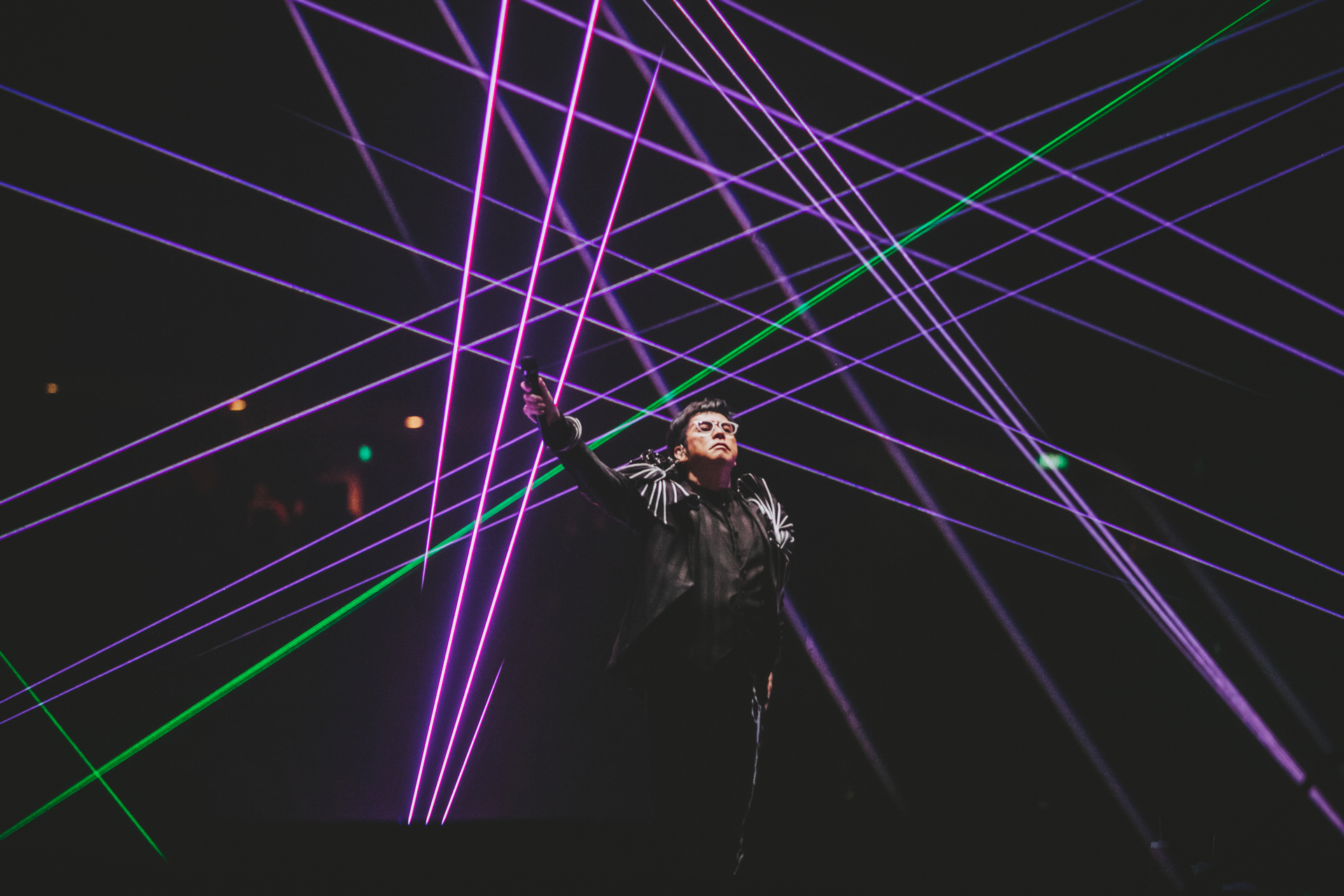 Alan sang his solo segment with his hits such as ‘Image on the Wall’ (墙上的肖像) and‘I Can’t Believe’ (我没法相信).  As he sang his Mandarin song ‘Keep Yon in My Song’ (把你藏在歌里面)， the stage was transformed into beautiful mesh of laser lighting. The precise coordination of sound and lights together with Alan’s amazing vocals was incredible.

He then delivered his romantic hit song, a sweet love song that everyone knows, ‘Love of My Life’ (一生中最爱).  He sang so well, just like yesteryears with so much power in his vocals. 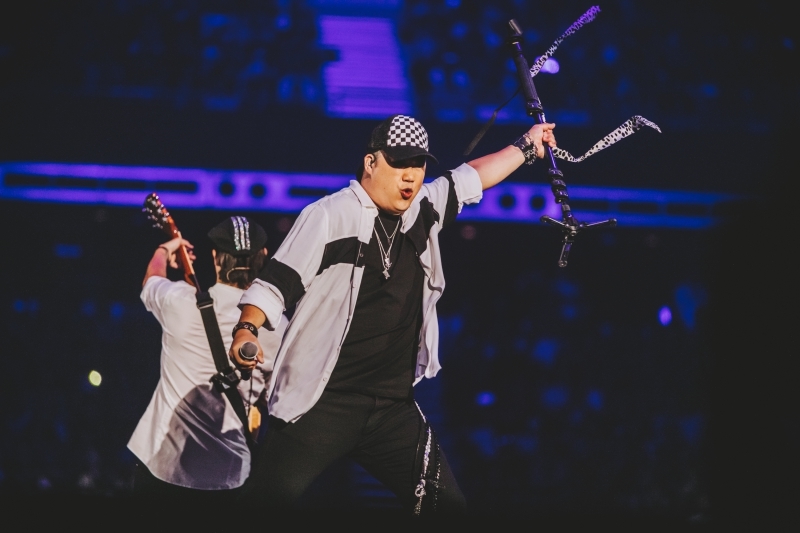 The next segment we had was of Ryan and Scott performing their father Sam’s hit song  ‘Gamblers Play’ (鬼马双星)  in a blend of hip hop/rock style.  Both sounded very much like Sam! It was so heart-warming to have Sam come back on stage to perform with his two sons singing ‘The Private Eyes’ (半斤八两).  This totally rocked the whole Indoor Stadium – the BEST OF THE BEST classic from Sam!   And with  Alan joining the gang to sing his BEST classic too ‘Love Trap’ (爱情陷阱), it was insanely entertaining. 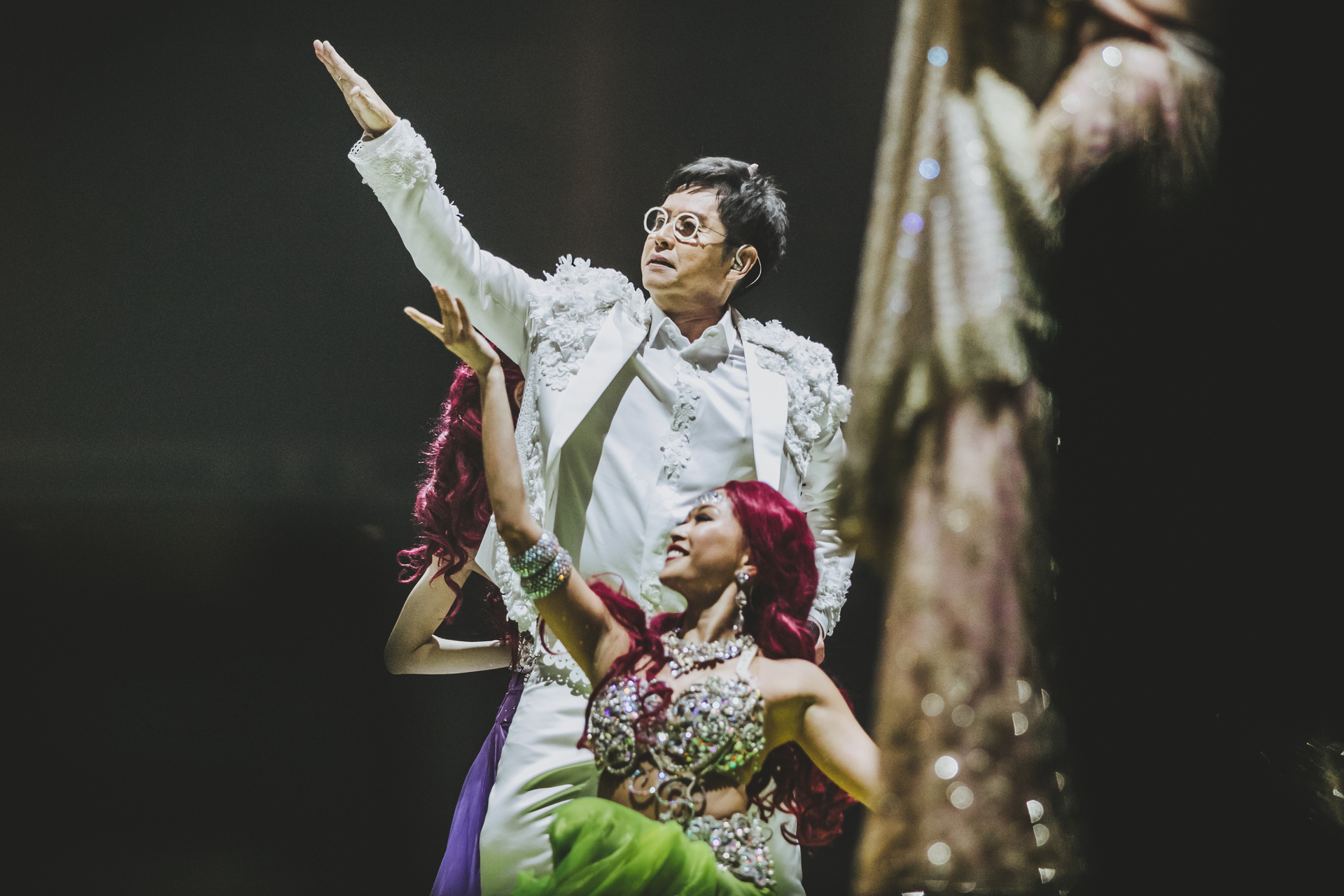 Both continued with their solo segment singing a medley of songs。 Alan sang an English number ‘Don’t Let Me Be Misunderstood’, followed by ‘Midnight Queen’ (午夜王后) and ‘Fire’ (玩出火) while Sam sang his medley of ‘Rain & Tears’ (是雨是泪)， ‘Paper Boat’ (纸船), ‘Only Care About You’ (我只在乎你) originally sang by Teresa Teng who is his idol, ‘Memorable’ (难忘你)。

Indeed this night was utterly memorable. Cantopop has left a deep impression on other great singers who have passed on but their amazing works and songs still live on.  Alan and Sam paid tribute by singing some of these singers’ songs such as ‘Wish For A Lifetime’ (一生何求), sung by Danny Chan and ‘Glorious Day’ (光辉岁月), by Beyond’s lead singer Wong Ka Kui.  With this song, the whole Indoor Stadium was lit with sparkling lights from the audience’s mobile phones; a beautiful sea of lights in loving memory of the great Cantopop singers.   These memorable songs will forever live on in our hearts. 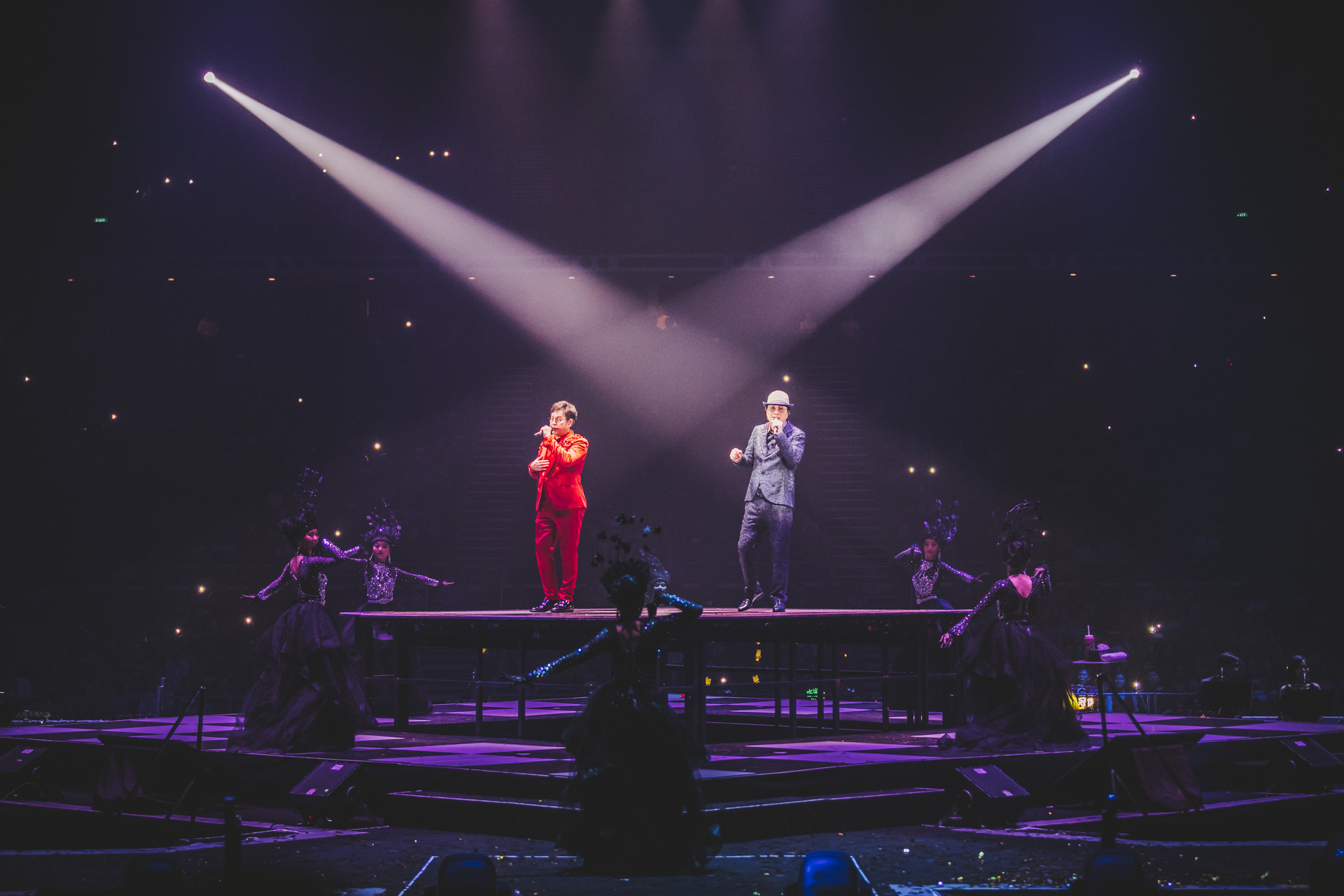 Alan shared that Sam has also left a deep impact on his career too with his positive work attitude and the way he approaches people.  Sam was his role model and idol.  Both of them hoped that the audience will have a memorable night and ended the concert with Sam’s 1972 popular hit song ‘Hong Kong Song’（铁塔凌云), which is about one’s love for Hong Kong and Alan’s hit , the romantic ballad  ‘Autumn Romance’ (爱在深秋).  Everyone sang along to this lovely number.

The concert ended with lots of love from the two legends and the audience wanted more, stomping their feet and almost bringing down the whole Indoor Stadium!  That was the love for their idols!

We were delighted with two encores! The duo came back on stage with Ryan and Scott in rock style, fascinating the crowds with  ‘Drunk’ （有酒今朝醉）.

It was really fun and awesome time as they went on to sing the fast track ‘Lorelei’ (暴风女神). 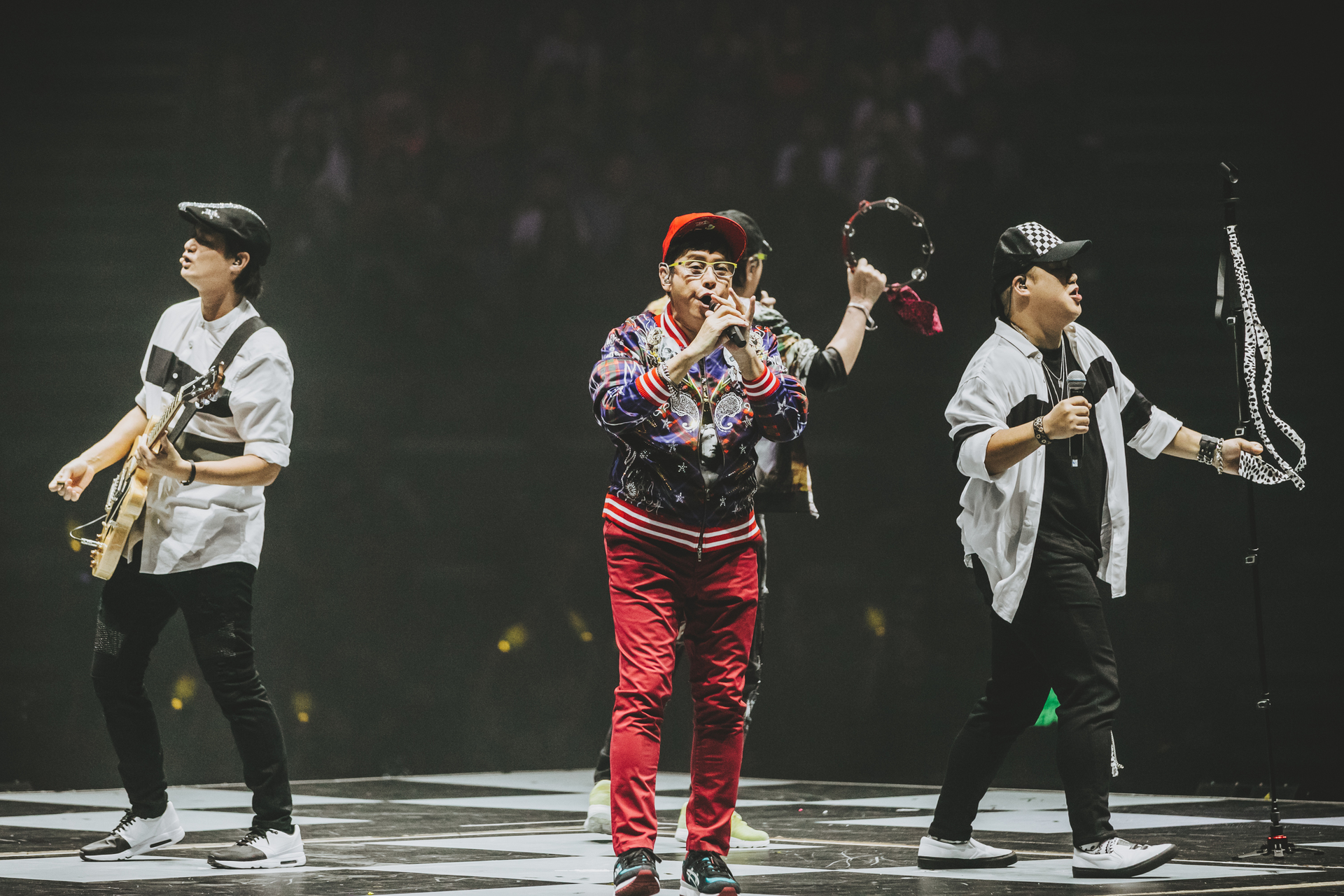 The encore continued with really heartfelt songs from them:  ‘Heartfelt Wishes’ (浪子心声), ‘Silence Goodbye’ 讲不出再见).    It was supposed to end but, again, the legends decided to dedicate to the audience another great song of all times ‘Friends’ (朋友), which started slowly and ended on a fast pace and in high spirits!

It was all smiles throughout the concert, which was absolutely entertaining and beautifully nostalgic.