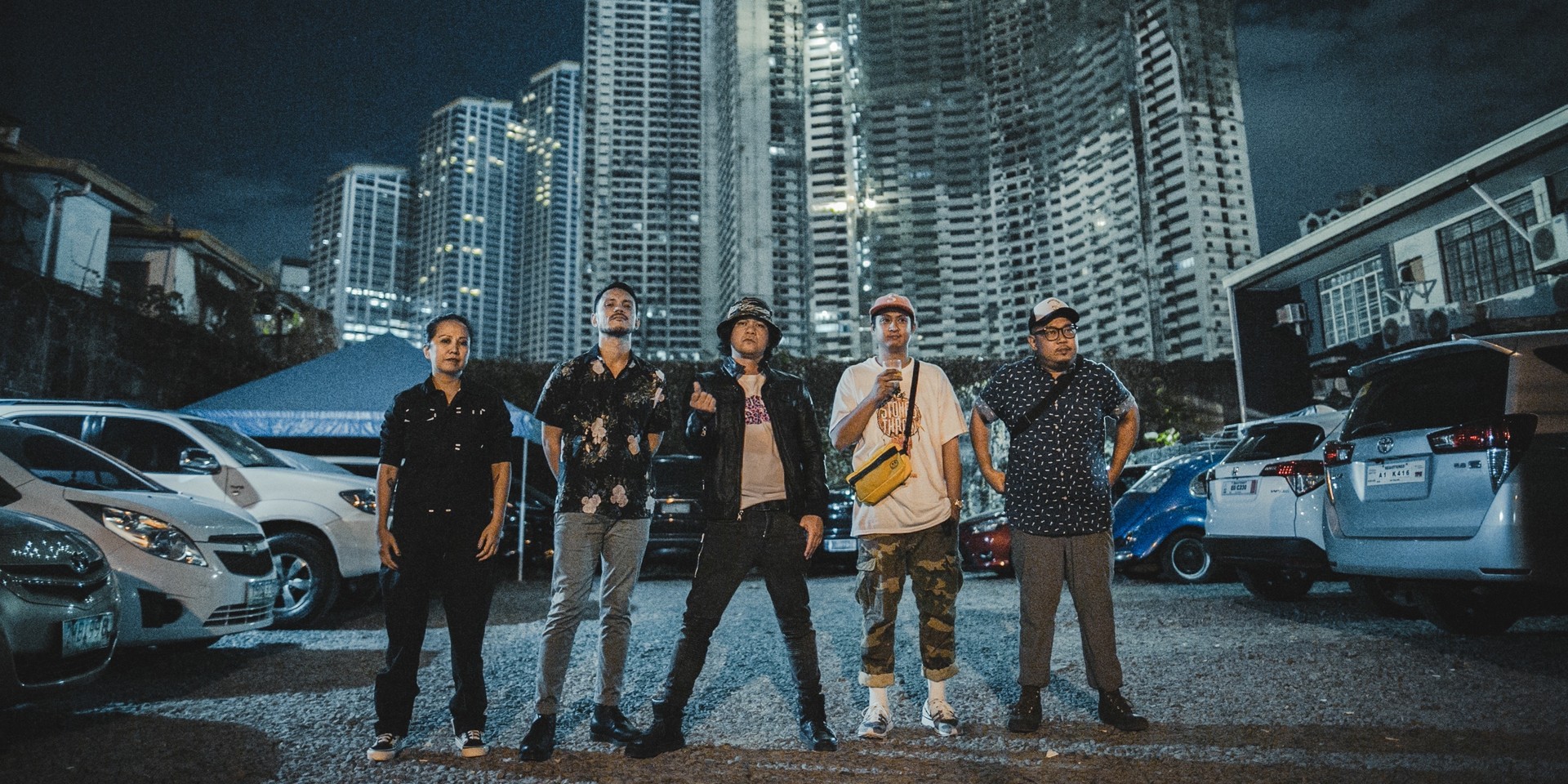 In celebration of Sandwich's 20th anniversary, Bandwagon sat down with the members of the band - Myrene Academia, Mong Alcaraz, Diego Castillo, Mike Dizon, and Raymund Marasigan, for an interview that will take them back to their beginnings, through their eight albums, and their very storied lives as musicians. Sandwich: This Band's A Party is a feature in 3 parts. Read the first two chapters here: Chapter 1: Return To Start; Chapter 2: Her Favorite Band.

If Diego had 'Hairpin', Mong had 'In Case of Fire' which was one of the first songs he penned for Sandwich. 'Photocopy' and 'Selos', too were some of his firsts. The writing culture was new to him, completely different compared to Chicosci’s. “Rayms gave us free rein to write,” Mong went. But there was one rule, “Hindi tayo literal.”

Diego would chime in, “learning from Raymund, paparinig mo lang.”

"Pag walang reaction, gamitin mo sa iba,” Mong explained. “That’s now, 2018. At that point 2005 or 2004? The pressure of submitting was immense, parang pass or fail lang,” worried in many ways as the bagong salta or newbie.

“But you did pass,” I pointed out.

While Mong’s first writing experience with the band felt tumultuous, one of Mike’s earlier songs for the band was borne out interference, Rayms shares in a recent radio interview. Having written Teeth’s most recognizable songs, 'Prinsesa' and 'Laklak', Rayms and the others were wondering why he hasn't written much for the band. Mike was cornered, and out came ‘Masilungan’.

It seemed like with songwriting, there’s a lot to unpack but as I probed in on the topic, they answered me with a lot of enthusiasm about their time spent in Shenzhen.

The band talks about their albums as snapshots rather than a set of work that can be classified in categories. “As a listener, you rank it on greatness of effect on you,” Mong puts it. Myrene and Diego add, "it's a personal thing."

Mong would further, “We think of it in terms of little pockets of, frameworks of who--”

“Snapshots of who we were at that time,” Diego would finish obligingly. 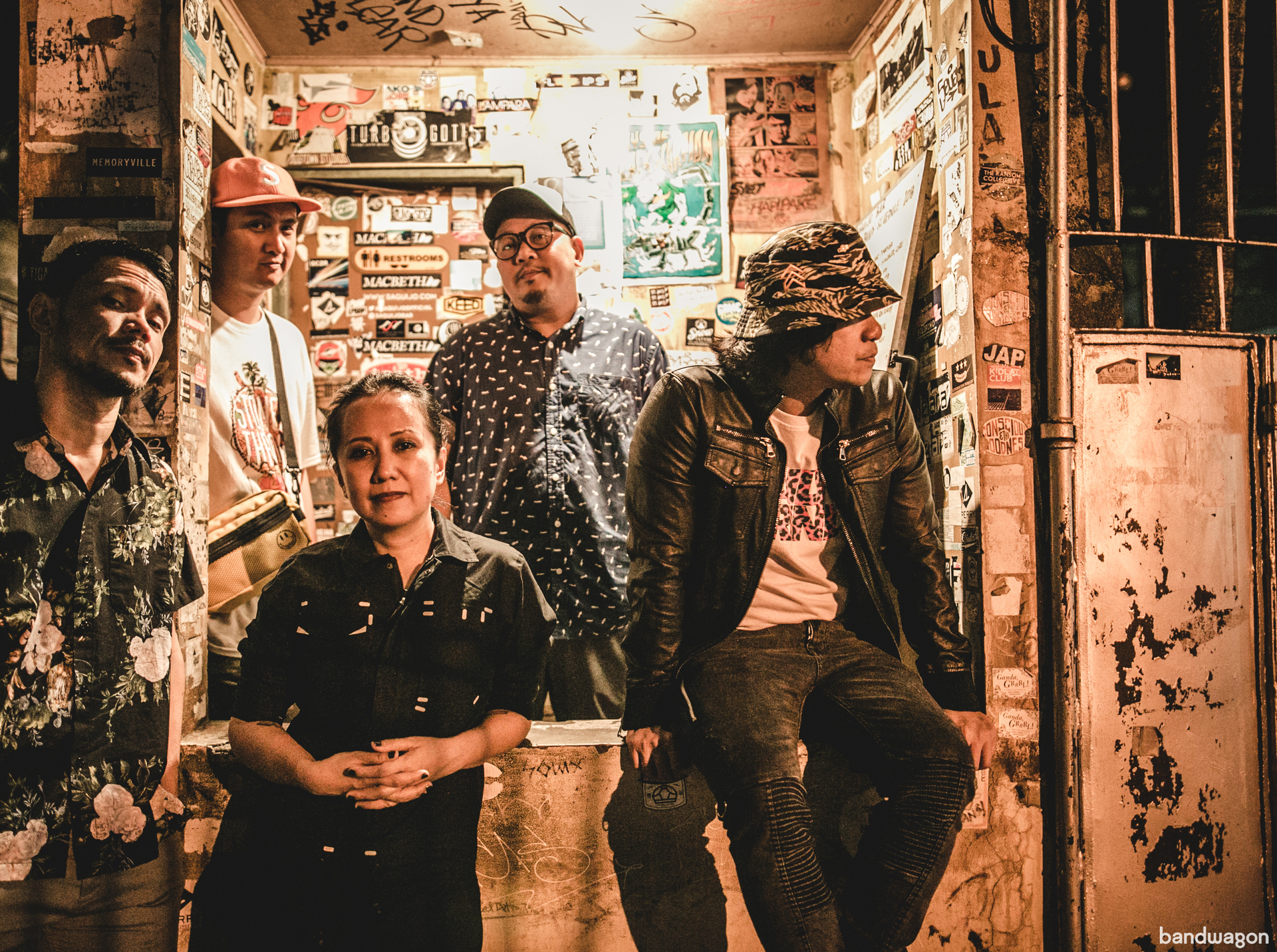 Their albums are very representative of their life at the time it was written-- from the darkness that 4-Track Mind embraced, to Diego’s breakthrough with ‘Hairpin,’ to the guitar-playing Mong and Diego developed by proximity. Even Mong's and Diego's frequent Thursdays in now-defunct MDC-- Manila DJ Club played a role in the influence of disco and dance in <S> Marks The Spot, which informs particular tracks like 'Fluxxe' and 'Text in City.'

Contra Tiempo had a song called ‘Stranded’ written overnight after Diego, Mong, and Mike got stuck in Hong Kong after missing their flight. 'Putik', which was not supposed to be in the album was written literally as typhoon Ondoy ravished the country, Rayms shares. And in the beginning of 'Kagulo', Mike's daughter screams-- a recording mishap that was retained.

This kind of storytelling would not be exempt in the band's art. Inksurge to Sandwich became what Peter Saville was to New Order or Joy Division. They were the visual advocates of the band, who have worked with Sandwich since Thanks To The Moon's Gravitational Pull. With that album, Inksurge has had zero experience with album inlays but fast forward to Sandwich’s next album and they end up producing the band's most memorable album art to date: the redness of Five On The Floor, the song per sticker concept-- it was all so deliberate.

I start to see the bottom of the whisky bottle as I ask what the group remembers from this album and Rayms throws me his usual shtick: He doesn't remember a thing, he says. He throws in cheshire smirk and I contemplate if he's making fun of me, enjoying hearing the versions of his bandmates, or truthfully just too inebriated to remember anything.

On my left, however, is Mong who seems to remember everything.

“We got called out by Yo La Tengo!,” Mong as excited as anyone could be about being called out.

Apparently, he has not; and the rest of the band are left waiting for Mong to get on his story.

“So, I watched Yo La Tengo live with Quark Henares,” he starts only to stop again, almost unconvinced that he hasn’t told this story to his band mates before. “Never ko to kwinento sa inyo,?” he’d ask again.

Mong, with Quark, chanced upon Ira Kaplan of Yo La Tengo in a hawker stand, “fucking Yo La Tengo sitting right beside us, eating!” Being a fan, Mong decided to give Kaplan a copy of Five On The Floor and made sure to tell them that each song title had a sticker.

“Which we didn't!,” Diego and Mong in unison.

“First of all di ko naintindihan sinabi niya. Ripped off Beck? Anong album?,” Mong would continue of this story.

Diego speculates that the Beck album, which turns out to be The Information, was not released with stickers in the country. “I was with BMG for a while and I never..,” Diego trails off.

<S> Marks The Spot, the next album, had great merchandising as well-- an arresting graphic design, stickers, and a collectible toy produced in collaboration with Secret Fresh. The next albums’ cover design would still hold visual narrative-- Contra Tiempo’s was Diego’s feet shot on an iPhone, Debris’ cover was filled with the band’s old valuables, destroyed-- but never again in the tactile way the 2006 and 2008 albums were. 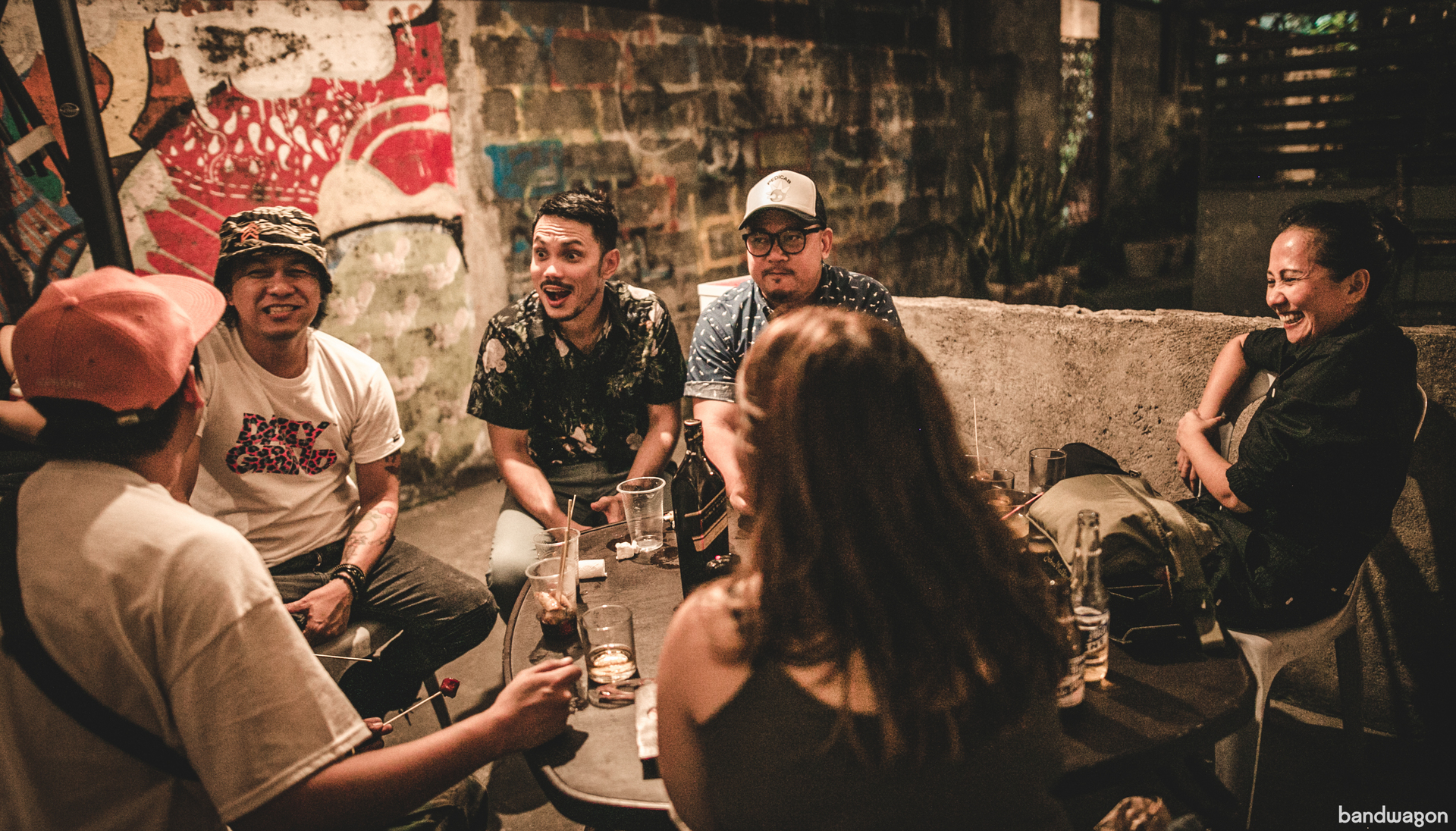 I start to fish for something inside my bag.

“Sorry! Late na, ano?,” noticing what I was doing. He mistakes this for my readiness to go home but I pull out a copy of <S> Marks The Spot and point out how the album was 17-song long, exclusive from the Side B CD that included versions of 'DVDX' sung by each member.

“Do you have a system of filtering songs; which ones get to go on the album and which ones don’t?” I ask.

Mong starts off, “we usually write double the number of songs but--”

Rayms had wandered off and was now back with fish balls in tow. Raymund would answers the question Mong left unfinished, “We'll write a lot of songs but we'll finish the ones that are fun to play. Wala naman rocket science don.”

Mong never got to finish that sentence and when he came back after Chicosci's set later on in the night to find that the interview had ended, I could hear the disappointment in "Tapos na?" Maybe he had more untold stories to share. I use this chance to rectify my missed chance in high school and had my copy of <S> Marks The Spot signed. He inscribes, "Isa, Dalawa, Tatlo." (One. Two. Three.) I tell him that Rayms made the same joke of a pun over a decade ago. "Eh magka-banda kami eh," he answers, an equivalent of a "duh."

I try to have them examine the role of technology in their process of recording. Rayms, tersely says, “No, we're better now. Because of technology.”

Myrene offers a discerning perspective on creativity, “it's still garbage in, garbage out. So whatever you put in; it still has to be good.”

Rayms volleys this notion, “I guess what we're trying to say is recording is just the process; it's a machine.”

It’s simply a tool, they would both agree.

“Like if you're a writer you could be romantic and use a real typewriter or use a word processor; it's the same,” Rayms says, making a point.

“Ako I have another weird aspect about it,” Diego contributes. “Sometimes with the limitations given to you, you can be more creative.” Diego, adding on Raymund’s argument, “When you're given a deadline... chances are, you're gonna write really fucking good kasi sabi ng publisher mo, tapusin mo 'to by this date. Sometimes those limitations can help create good art. And you're gonna push yourself and work within those--” 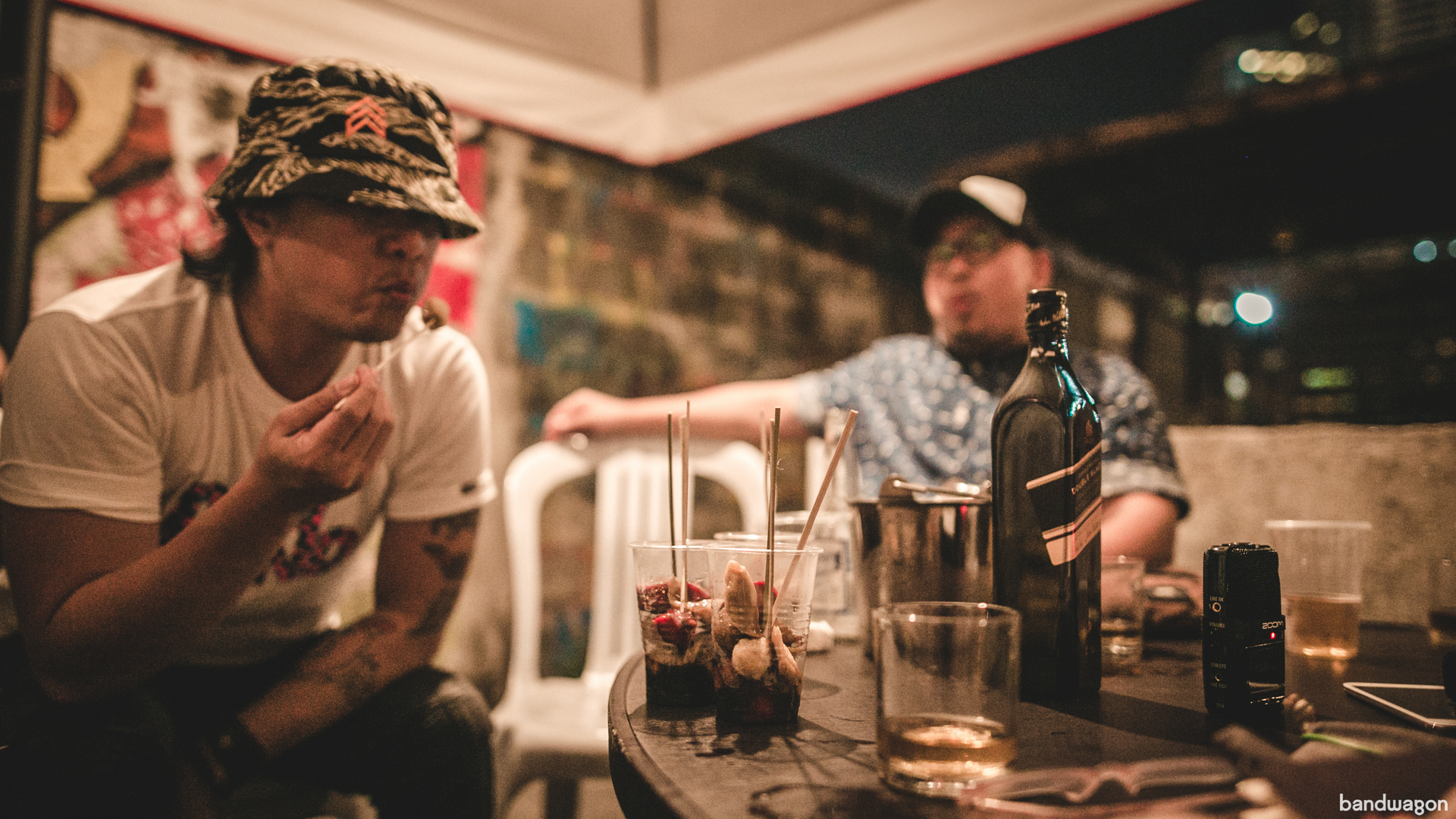 In their albums, they share that that’s how they’ve always been-- working within parameters. Contra Tiempo, as a whole, was written entirely in Filipino; 'Sunburn' was just one chord; and 2013's Fat, Salt, & Flame was recorded live just to name a few examples of their use of creative parameters.

It wasn’t but Myrene ever so coolly just flicks it off.

And with that minor distraction, the conversation on songwriting resumes, unaffected: "We wouldn't ever put out anything na hindi 100%," Myrene tells me of the work they have done.

A self-confessed control freak, Rayms, used to take over and finish work if the process would take longer than he was comfortable with. Nowadays, his psyche has shifted to equity; "The more we're getting older, I have this feeling [that] I want to everybody to have a stake in the song."

By the time their most recent release Debris came out, Raymund would claim to have done less work than he ever has.

While Sandwich remains a big part of their lives, Everyone in the band has grown up with different sets of responsibilities, priorities; and this has shifted the weight toward storytelling.

Rayms, making me understand, "We're not looking for anything more."

"We're looking for stories, textures. Now it's more nuanced, it's more how do you say...," Rayms hands me a pause.

I understood. But it would be unfair to say that Sandwich were never storytellers. From homages to their heroes in 'Sugod' and 'Betamax' to their profession of love to the cities that raised and formed them in 'Marikina' and 'Candelaria', Sandwich was never the type to stray from a statement made.

Apart from the stadium anthems that showcase the band's command, Sandwich is most affecting when they admit to the ennui and fight against it. It reveals itself as early on as their first song, 'Sakyan;' the tiredness in "laging pagod" and the weariness in "wala naman ginagawa." But there is hope with 'Maybe' in "wishing for maybe."

In 'Return to Center', there is a defeat in admission of too many nights, fights, years, rides, words, days, cars, stars, and scars. This exhaustion is audible in 'Masilungan' as well.

Sandwich, however, learns to confront it in a song referencing one of Myrene's favorite books by William Gibson. The acceptance of the inability to grasp time in New Romancer's 'revolving doors' is admirable in its poise because as Myrene sings, there's no shame in it.

"How long?," their latest single 'Time Lapse' asks. The song persists to its end, "I'm still waiting," as if unmoved, as if anchored.

Sandwich is still here; a band of twenty of years-- prolific in their songs, riotous in their stories. As I clock in nearly five thousand words at the end of this retelling, something becomes clear to me.

Mine were just the words, but theirs was the story. 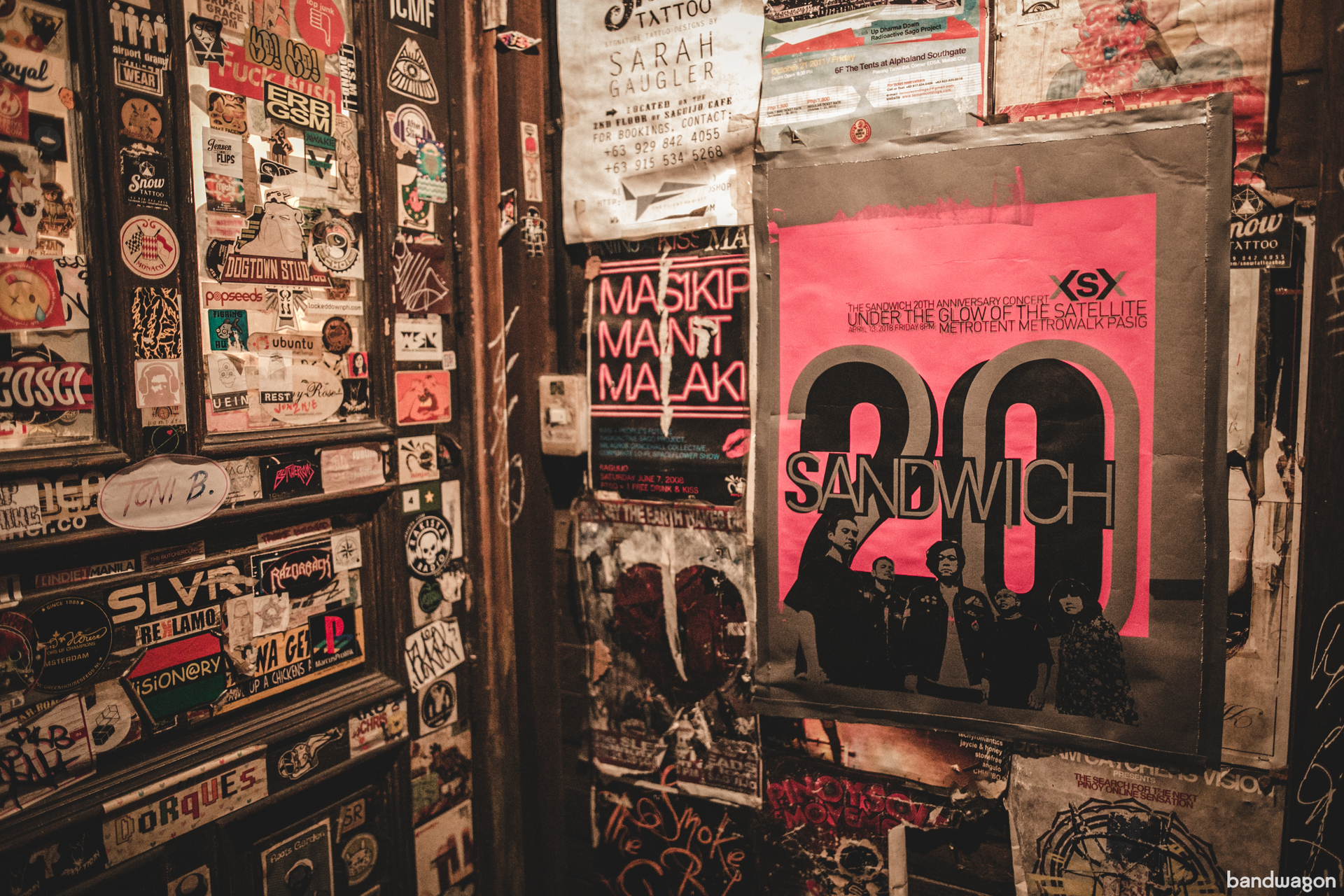