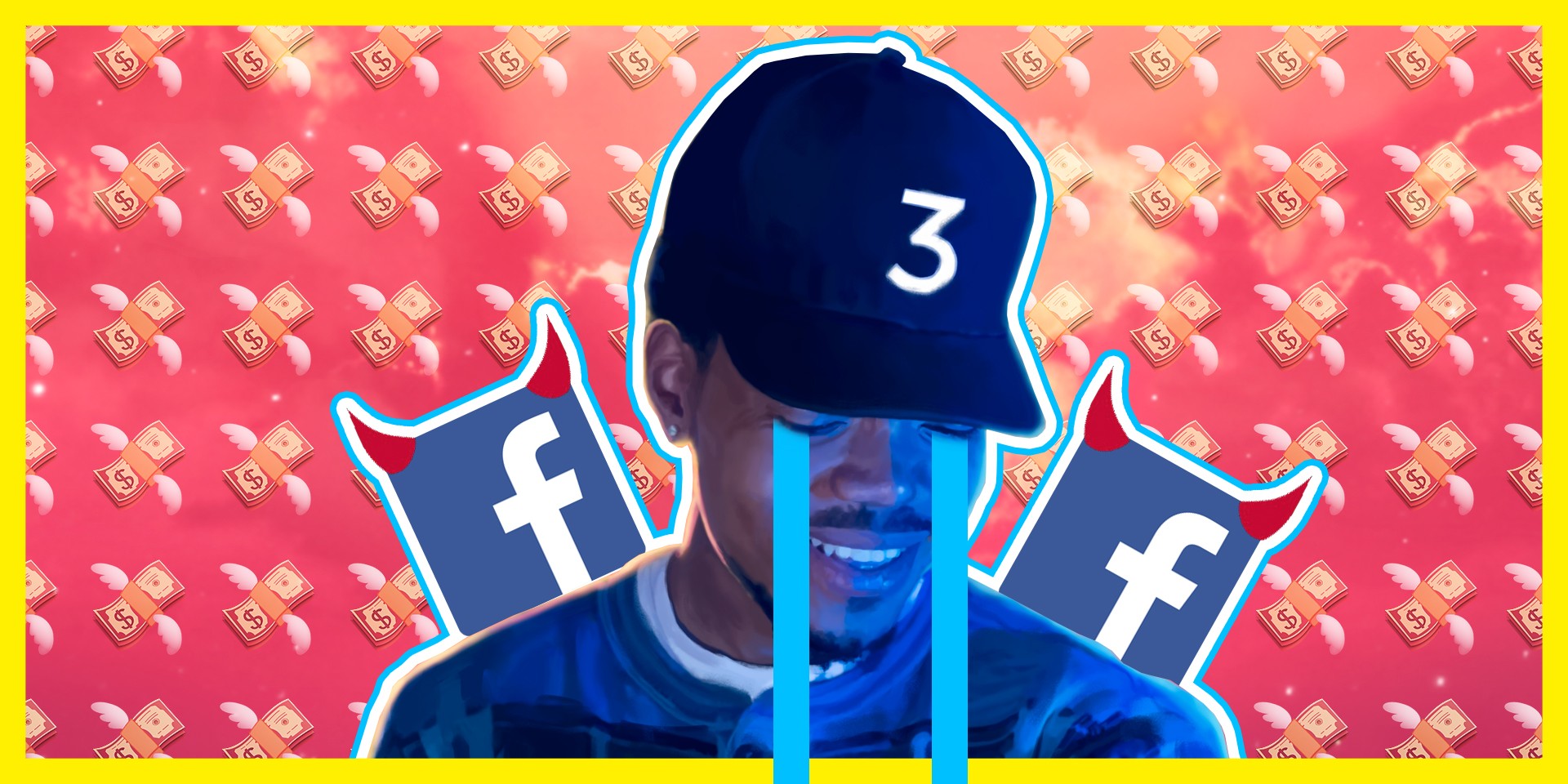 Imagine that an artist you adore has announced they are coming to perform in your country. You see the Facebook event, indicate that you’re “Interested”, and wait with great anticipation for ticket sales to go live.

When the Facebook event announces that tickets are available, you click the link only to find that they’re shockingly expensive – but still selling quickly. You panic, contemplate the somewhat depressing contents of your bank account, sigh, then resign yourself to the sad reality that you simply cannot part with that much money.

This is what recently happened to me for the highly anticipated Chance the Rapper concert at Zepp@Big Box. When I lamented about this to a friend, they were baffled: I was agonising over tickets allegedly “selling quickly” at a time when tickets had not even officially gone on sale.

After doing some digging, we found that I’d been fooled by an unofficial Facebook event, set up by a page called “Asia Events, Concerts & Festivals”. The ticketing link on that Facebook event redirected me to a site called eatmytickets before eventually sending me to viagogo – an unauthorised, and in fact notorious, ticket reseller.

A screengrab of the viagogo page for the Chance the Rapper concert in Singapore, taken 22 June

This Facebook event, which at the time had even more attendees than the official Facebook event set up by LAMC Productions, was directing its audience to an unauthorised ticketing website selling tickets at grossly inflated prices: in the case of Chance the Rapper, S$269 versus the official price of S$158.

After I reached out to LAMC Productions to inform them of this issue, the promoter swiftly made a Facebook post announcement informing fans that official tickets were only available through SISTIC.

An isolated incident? Perhaps. But it’s well-documented in other territories like the United Kingdom that sites such as viagogo have in fact become the target of investigation for misleading consumers into purchasing overpriced tickets via their platform.

“Asia Events, Concerts & Festivals” has also created events for dozens other concerts happening in East and Southeast Asia. Though some events have so few RSVPs they have been practically ignored by Facebook users, others like their event for The Killers in Singapore (the rock band are headlining the second day of the Singapore F1 Grand Prix) has garnered over 3,000 RSVPs. Their event for Guns N’ Roses in Manila has almost 1,5000 RSVPs. (The Facebook page did not respond to a message seeking more information about what they do and the individual(s) responsible for the page.)

What is common to all the events created by "Asia Events, Concerts & Festivals”, though, is that they reflect an acute awareness of how concertgoers today use social media – a common naming convention for their unofficial events is "[artist] [country]", which anticipates what social media users type into their search bars, securing them top spots in your Facebook search results. 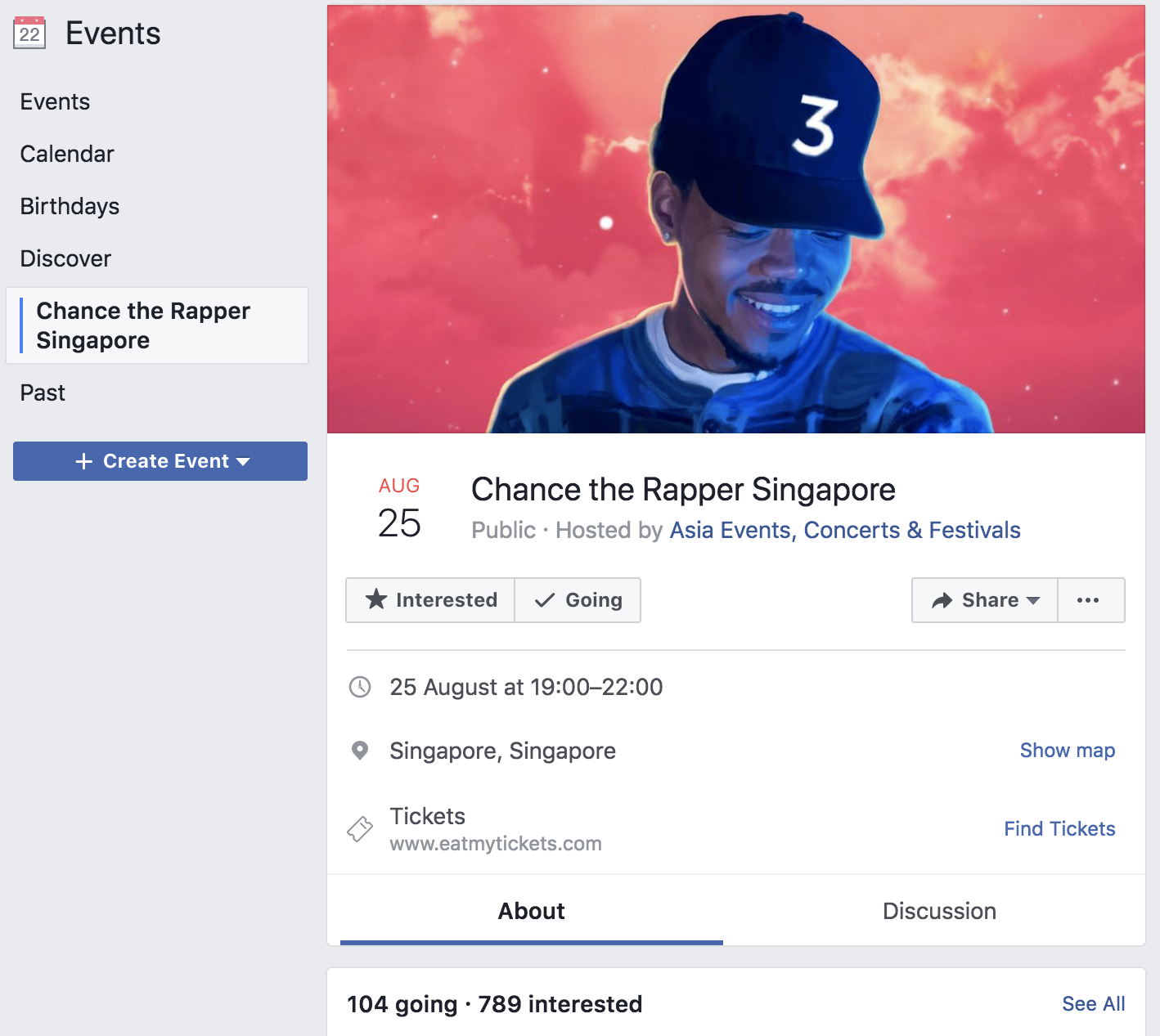 A screengrab of the unofficial Facebook event, taken 22 June

Scalpers (those who resell tickets at inflated prices for admission to events) have long been active in the music scene – it’s not uncommon to see them kick into action after tickets for big pop concerts have flown off the official shelves. This has been the case for Dua Lipa, Sam Smith and JJ Lin concerts in Singapore this year.

It’s also not uncommon for people to profit off concert ticket sales even before they’ve gone on sale by offering “queueing” services where the third-party stands in line for a customer, buys a ticket on their behalf and charges for their time and effort. This happened when tickets went on sale for JJ Lin’s concerts and also Hallyupopfest, the K-pop extravaganza taking place next month.

In a time when social media is one of the main ways in which individuals keep abreast of all that is going on, Facebook events have become a powerful tool for people to RSVP to occasions they may be interested in; they act both as reminders to self and ways to let friends know of events you can head to together.

Promoters understand this, and invest heavily in social media marketing, especially for acts whose target audiences are younger, digital natives. Creating Facebook events and posting regular reminders and updates in the Discussion tab is de rigeur for a concert in this day and age.

It seems that scalpers have noticed these trends and are using unofficial Facebook events as a way to seed secondary ticketing sites in consumers’ consciousness – ahead of official ticketing channels.

And often, they succeed because they beat concert promoters to the punch. We saw the same thing happen for Khalid’s show at Zepp@Big Box in real time, with the page “Asia Events, Concerts & Festivals” once again setting up an event that redirects to a ticket reseller site. Midas Promotions eventually set up an official Facebook event page for Khalid’s gig, with the ticketing link taking users to the official SISTIC ticketing platform, but they weren’t quite as fast as “Asia Events, Concerts & Festivals”. 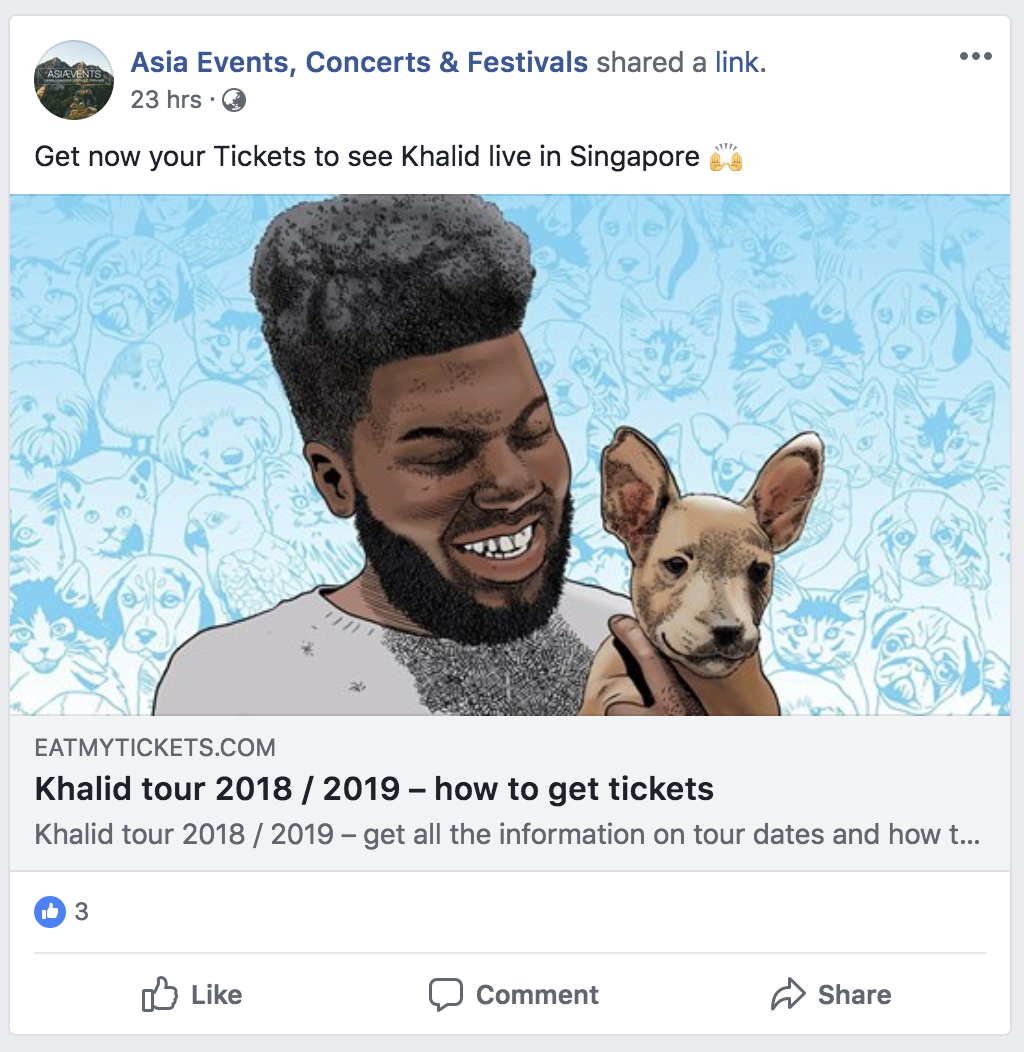 A Facebook update by "Asia Events, Concerts and Festivals" that takes users to eatmytickets, which then directs users to viagogo

It will surprise no one to learn that local concert promoters are aware of these unauthorised ticketing sites, and that they do not support these tactics.

“Their goal is to trap uninformed fans and buyers to purchase tickets from their site, whereas we the promoter, invest in a full marketing mix which includes outdoor, radio and TV locally to actually build/push the artists’ content and tour,” a representative of Live Nation SG commented to Bandwagon via email.

(Live Nation SG is bringing comedian Kevin Hart to Singapore later this year – a show that has also been the subject of an unofficial event page that redirects to viagogo. That unofficial event page, which has garnered more than a thousand RSVPs, does not even spell Hart's name correctly in the event description.)

Scalpers leverage off the marketing actions of concert promoters and heavily invest in SEO (Search Engine Optimisation) marketing, Live Nation SG contended. Consequently, “when fans are ready to purchase the tickets, their search feeds will lead them to third party sites like Stubhub, viagogo, and eatmytickets” – the first sites that show up on search engines, boosted by SEO.

Despite their awareness of these sites, there’s little that concert promoters can do to shut them down.

“Even when we do track these unauthorised agents and their IPs, they’ll likely create a different account under a different name with a different card and do it all over again. It’s not surprising that they have more viewers and followers as they invest heavily in SEO with multiple dummy accounts,” added Live Nation SG.

“Even when we do track these unauthorised agents and their IPs, they’ll likely create a different account under a different name with a different card and do it all over again." – Live Nation SG

The shadiness of these reselling tactics have been compounded, Live Nation SG points out, by instances where fans have been swindled into purchasing invalid tickets for extortionate prices, only to be denied entry on the day of the gig itself because their ticket is a fake.

Live Nation SG saw this happen for their sold-out LANY show earlier this year, whereby fans with secondhand tickets were not allowed entry due to safety and legal capacity restrictions of the venue.

When asked if they had an official policy on buying secondhand tickets, LAMC Productions advised that customers should “always purchase tickets only from verified source, as specified on event organiser's website and socials to avoid situations where purchased tickets are invalid. Should they have any queries regarding tickets, it will be best to contact LAMC Productions directly to verify first.”

As music lovers ourselves, we understand the desire to buy a ticket for a gig you desperately want to attend even if doing so means you subsist on grass and your own tears for a month.

But that doesn’t mean we shouldn’t exercise more skepticism when it comes to concert announcements on social media. Though a fun and useful tool to keep in touch with friends and to add events into your social calendar, social media can also be manipulated by those with ill intentions for their own gain.

Though gig tickets in Singapore are often expensive to begin with, scrutinise any updates you may come across to make sure that when comes the time for you to buy that coveted ticket, the golden pass you acquire will indeed let you in.