Imagine a school with plain-white walls, and teachers who are stickler for rules, teaching students with report cards; all speckless. Everyone is expected to be a working professional in their later years, dropping themselves into boxes with occupations labelled onto them — lawyers, doctors, managers, engineers. It can make for a gruelling but positive school experience, as it is the ideal direction schools wish to head into. But what is missing is an avenue for students who don’t find themselves in to build a home around. It is impossible to get a definite statistic since I’m speaking in broad terms, but at least one out of a handful of students would want a future where it defies most norms. 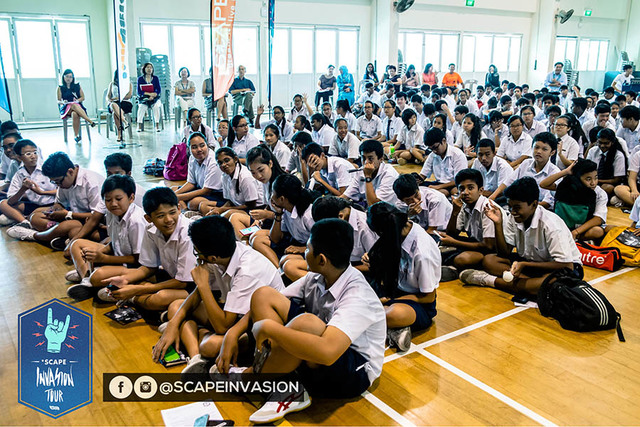 The *SCAPE Invasion Tour made its fourth stop at First Toa Payoh Secondary School. As most schools are, they are more glitz and glam. Overhead the round-edged stage were hard-blowing air conditioners that cooled the hall, guarded by glass doors intent on keeping the students in and the warm May weather out. Filling into the hall first were the ones with their blank looks and their knobby knees stopped at by their short navy blue shorts. The higher hemlines and long pants then entered the halls with a boisterous persona, accompanied by teachers who walk closely alongside them. Both separate groups had one similar feature in their outfit; heavy bags slung over their back creating a slouch-like appearance with their body barely holding up their tonne-heavy reading materials. It was one period to the end of school and we were in their way before they head through gold gates marked freedom. 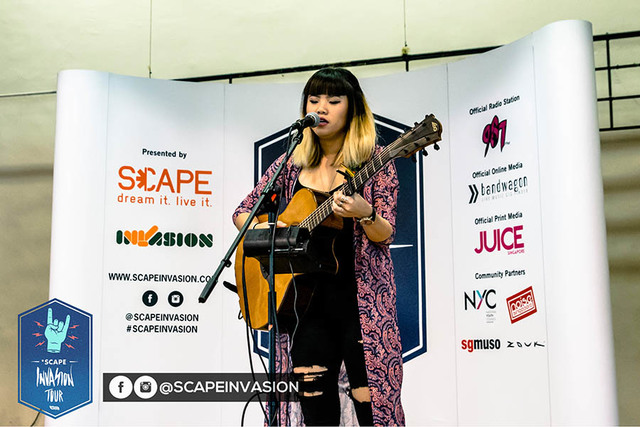 Most get a change of heart when Joie Tan gets onstage. Blending in well after disclosing her age (only 20!), Joie’s level of tenacity before a crowd gets her comfortable in her own skin, collocating good vibes with her friendly persona and humble interactions with the crowd (“I always used to wait for recess to come so I can eat mee rubus”), the uniformed audience spills back at her with cheers and one particular “power la”.

As a gauge of success, Joie commences with a cover of Kodaline’s ‘All I Want’, soft and fluid in a relaxed state, dispensing it like a 45rpm record played on 33. The haunting performance only gave headroom for her originals to take on a more endearing note, pressed between her acoustic guitar and whispering sweet nothings, it is as though Joie is reading line after line off her diary, calling out to her mystery lover. Introducing a looping machine while namedropping Ed Sheeran, the crowd goes wild then in awe as she fathers a slick tune from thwacks and shoe taps. Out of the spotlight, Joie slips to the back possibly embarrassed by the heart-warming appreciation. 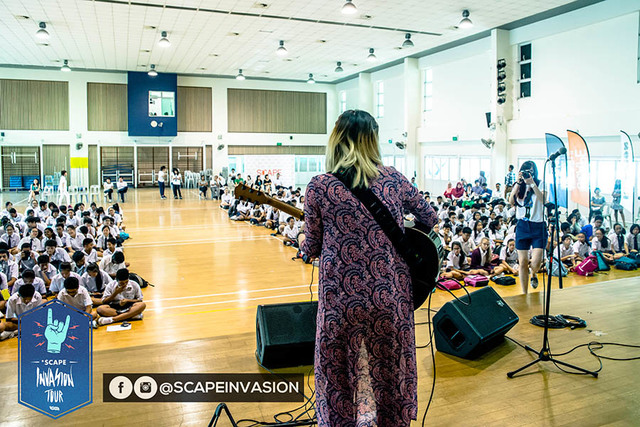 Before moving to stage, ShiGGa Shay drops a simple request to 987FM DJ Kimberly Wang to play good host in getting the school on their feet. Her efforts are encouraging and it comes strange that none of them are heeded. Planting two feet onto the ground, ShiGGa Shay turns out in an attire of black and white, with two white lines across its sleeve; a symbol of pride for the crew. Breaking into song, he is a spitfire. Knocking back phrases of ‘Hokkien weh’ quickly, then intertwining them between balls of pertinent and seasoned vocabulary, ShiGGa Shay is agile and astute in his motions. Raising his hands, he describes and idealise Singaporeans of the next generation as one who question rules when warranted and not comply, execute and serve blindly in track ‘LimPeh’.

Stepping away from the expression of patriotism in ‘LimPeh’ and ‘Lion City Kia’, Shigga Shay moved onto his new track, ‘ShiGGa Morning’. The track which has garnered a considerable amount of plays on YouTube for its exuberant use of foxy and shapely girls, refreshing one-shot Birdman-esque directing style and the saccharine croon of Inch Chua in the chorus. 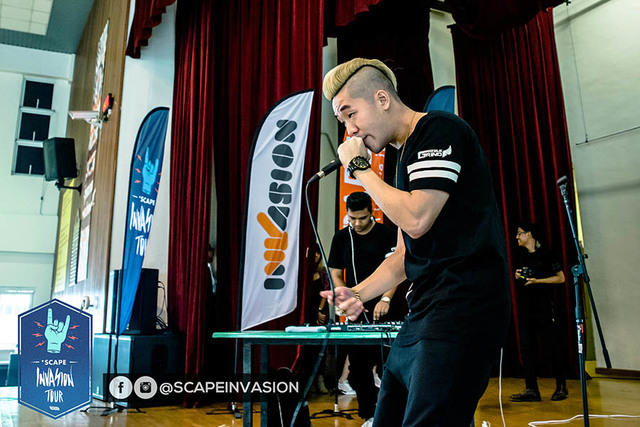 Despite the cheers and laughter in amusement, in retrospect, the students seemed like they weren’t ready to appreciate music which coiled hokkien words or Singlish phrases around a core, built over the years that centres around the use of proper english. Whether today could be the spark of their love for local music could be debatable, but with this appearance, they will be exposed to their first taste of music that envelopes the Singaporean culture and observe popular music take on a different form. These kids will learn to experience music with different eyes now, discerning and crafting their own personalities as individuals.

Speaking to ShiGGa Shay after the show, he discusses with intent how the rap culture in Singapore has moved from its origins, crediting Dick Lee as the unwitting pioneer of Singaporean rap with ‘Rasa Sayang’ and ‘Fried Rice Paradise’, he and comedic rapper Sheikh Heikel spearheaded the movement, which has dropped to a lull since. 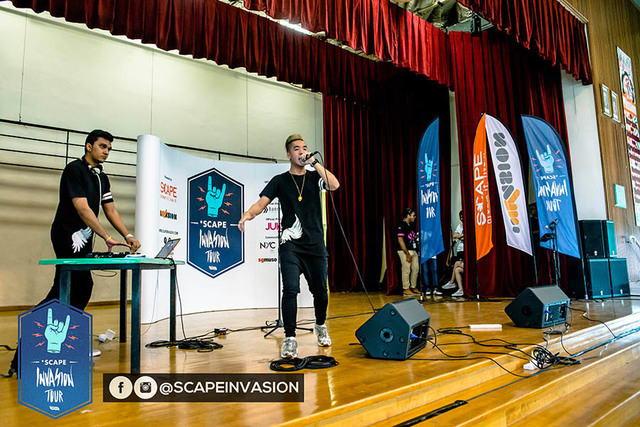 However, a resurgence of the hip-hop genre back to mainstream status is in session as new acts like the Grizzle Grind Crew, THELIONCITYBOY (who's on the *SCAPE Invasion roster as well) and ShiGGa Shay have their sights set on making SG rap a sustainable scene. “Singapore is very niche; we don’t have enough audience nor content to have a sustainable scene yet but it’s still growing, and it will be a mainstream genre in Singapore in a few years.”

Aligning with what most educational institutions are aiming for, ShiGGa Shay has no issues with the Speak Good English movement that has been ongoing. “Schools are supposed to teach you the right way of speaking. I’m not, I will give you as it is what is spoken on the street. Hip-hop is a way of being real with where you are from and your struggles in life, if you are not real about what you say, people will call you out.”

In the race for good grades and spots in desired institutions, ShiGGa Shay’s interpretation of hip-hop — no doubt influenced by his own upbringing in our education system — should ring true to all the youths endeavouring through numerous exams, especially with students who have many other personal issues to toil with. The art of the genre is rooted in the struggles of African-Americans but in Singapore, it could translate into the struggles of fitting into our country’s competitive society. We can only hope figures like ShiGGa Shay, and perhaps one of many students in assemblies like this, would spearhead a new movement that could very well create a form of hip-hop we can call ours.