There’s usually an air of melancholy on the last day of school. When the blue-uniformed students of Jurong West Secondary School came through the gates for their final day of the term, marked with ‘JWSS’ in large fonts, most thought it would be a day where month-long homework and reading materials are dished out. But with the school in a celebratory spirits, the teachers were all hands in for the *SCAPE Invasion team to end the term with a bang. The homework can wait, but the party starts at 9am in the hall.

It’s a perfect Friday morning for celebrations of sorts: Stephanie, Melvyn and Ryan who make up the HubbaBubbas, are jovial and bouncy despite their bright and early set. Standing at each side of the stage surrounded by bunches of cables and effect pedals, the trio worked from their stations to get the students comfortable with light-hearted humour and enthusiastic banter. 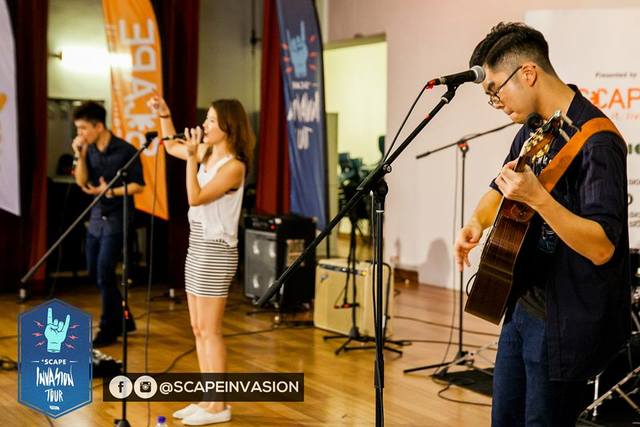 The band is attentive to the audience’s preferences with a cover Bruno Mars’ ‘Uptown Funk’ that led to the eventual sweep of feet and the winning of hearts. Their triumph is a testament to the tight harmonies and an unconventional approach of including a vocal percussionist to fill in the missing blanks between the quick-firing guitar work of Ryan and the impressive vocal gymnastics courtesy of Stephanie.

HubbaBubbas are likely to surprise people. Despite the initial stumbling in pronouncing their band name, the band is sleek and easily palatable — every track is candy-gold. ‘Dancing On the World’ from start to finish is a bubblegum dream; cascading guitar rhythms are laid out at the bottom with a fidgety complicated line of beats before the glossy sweetened inclusion of Stephanie’s croons is laid atop like the multi servings of fruit on a well-modelled fruit cake. 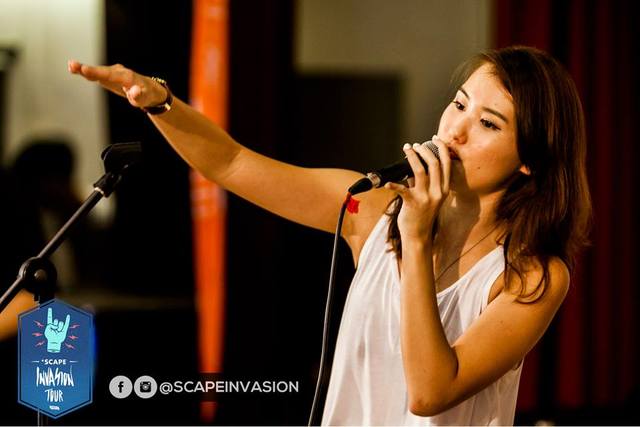 As the party was swinging to the beat, The Summer State would show up with a more boisterous representation of local music. Side-stepping from the better known local performers like Gentle Bones and The Sam Willows, who make up the pop-veined radio-friendly bunch, the introduction of The Summer State to the *SCAPE Invasion Tour would give teenagers a variety of genres to pick their favourite from.

Well since the sudden change in music trends to more EDM-friendly hits, the waning genre of pop-punk has suffered tremendously despite major improvements and progress. Today’s *SCAPE Invasion Tour stop at Jurong West would give the pop-punk genre the attention it thoroughly deserves. 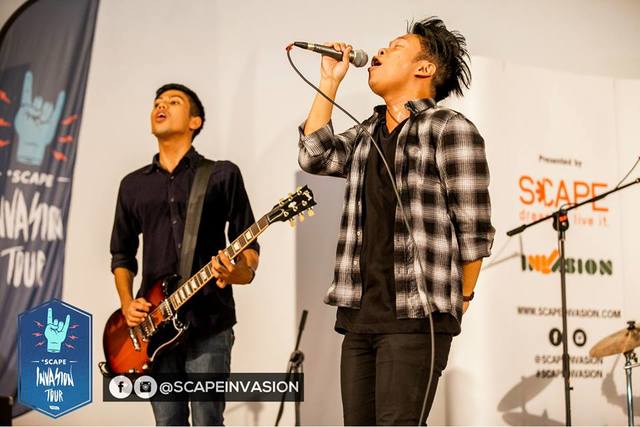 With less nectarous tunes and more bite in their showmanship, the five-piece’s belief in an entertaining and lively atmosphere is easily spotted in their riotous head-banging; hair would end up in odd places and sweat dripped furiously onto the wooden floors. In ‘I Do and I Don’t’, The Summer State would have a sixth inclusion: singer Vanessa Khoo, invited by frontman Bryan Maria to swap parts with him in a moving ballad about the overwhelming capacity of love. Their soaring vocals would come together like a firm handshake and tickle the audience’s fancy into a soul-stirring reaction.

“HubbaBubbas were very talented and they were great in bringing the atmosphere up. I feel the performance was very close to us, it brings the gap between both audience and performers closer.” Clifford (student)

“The Summer State was a bit too loud and we couldn’t hear the vocals at times but we loved it!” Brian Chia and Jennise Chang (students)

“The Summer State was entertaining, the lady guitarist was energetic and cool. Girls should do more of this stuff, girls are usually shy and they should open up.” Suriani and Shafiqah (students) 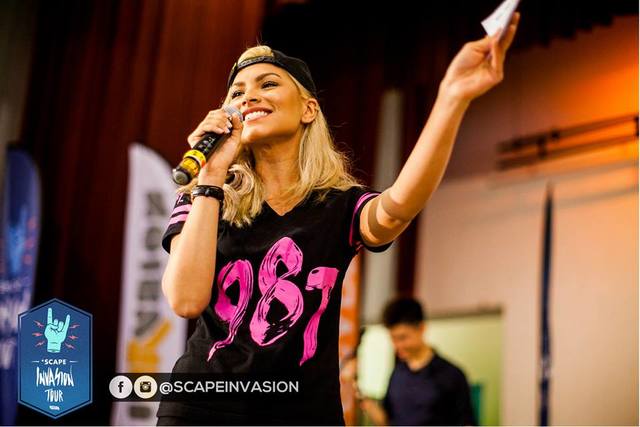 “I love the HubbaBabbas! I think they are so unique. They were super pumped up at eight in the morning, usually it takes a while for bands to warm up. They’re on fire! The Summer State was amazing! I can’t say enough about them! I just kinda wish my school had something like that in the past.” Tabitha Nauser (pictured, 987FM DJ/*SCAPE Invasion host) 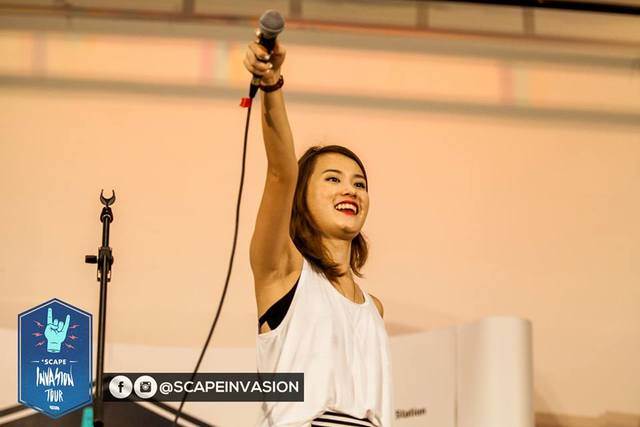 “I wanted them to clap but they’re holding their phones up, so that was a bit awkward. Also I wanted to walk down with my microphone but I was afraid there would be feedback and it would be damn paiseh hahaha” Stephanie Lim (pictured, vocalist of HubbaBubbas)

“It’s actually quite surreal because many years back we’re watching bands like these perform, and now it’s our turn. Back then, West Grand Boulevard and Ronin were doing the circuit too. We are very honoured to be coming back full-circle to perform for students.” Ryan and Melvyn (HubbaBubbas) 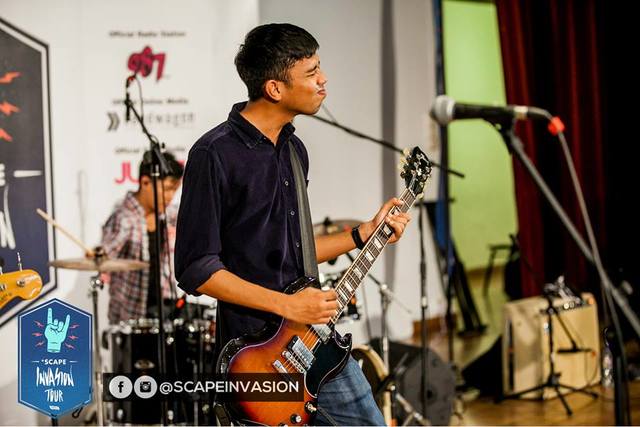 “I kept thinking of me when I was onstage, when I looked at the students, I was reminded of when I was watching bands do the Invasion Tour. I had a throwback moment like we came full-circle and we are on the other side now.” Shaykh Akbar (pictured, guitarist of The Summer State) 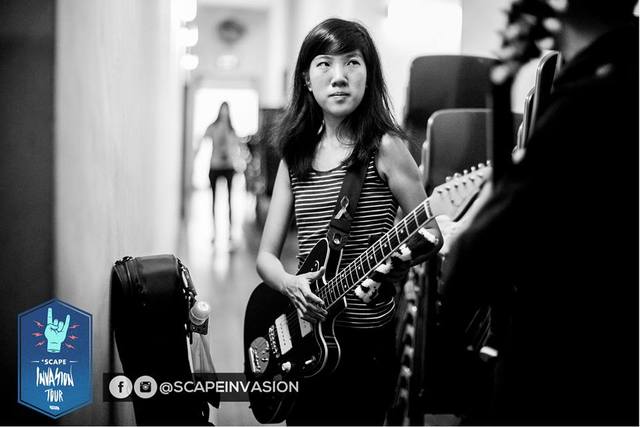 “It’s been a while since I last woken up this early and I was trying my hardest not to fall offstage. Also when Ronin and Electrico came to my school to play for the upper-sec assembly, my friends and I snuck out to watch them at the school hall. We tried to blend in but we were like really short.” Victoria Chew (pictured, guitarist of The Summer State)