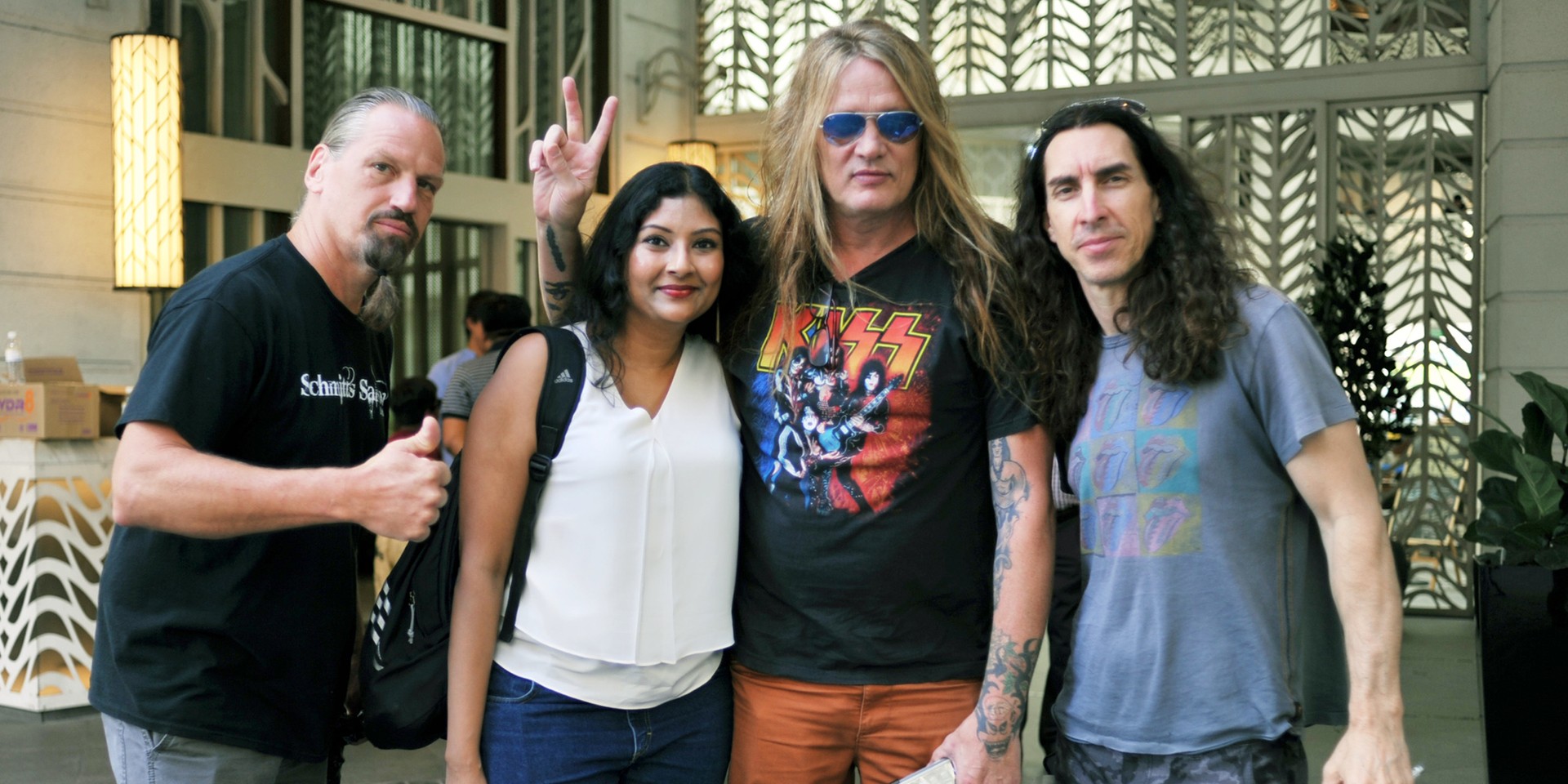 After years of listening to the songs of Skid Row and the powerful voice of Sebastian Bach, I was thrilled to hear Sebastian will finally perform in Singapore. I also knew he was an avid record collector — with the amount of countries he visits on every tour, he makes it a point to scour record stores for rare vinyl, especially ones by KISS.

It was no surprise then, that he asked about local vinyl record stores during an interview with One FM 91.3. As a beginner in the world of vinyl collecting, and making friends with hardcore collectors along the way, I knew there’s so much he can explore. And I had to tell him.

Can't wait to see you in Singapore. There are cool vinyl stores here.

Sending Sebastian a simple tweet proved to be fruitful. Closer to the concert date, Ross Knudson (of organizers LAMC Productions) gave me an offer I couldn’t pass up: bringing Sebastian himself to as many record stores as his schedule would allow.

I scrambled to come up with a list — with the help of a friend — and decided the best one to start with was Roxy Records and Trading, one of the longest-lasting record stores in Singapore.

Any nerves that were building up as I waited in the hotel lobby were vanquished by the sheer warmness of Bach, along with his bandmates Brent Woods and Bobby Jarzombek. Bach was exceptionally friendly, and greeted me with a hug almost immediately.

He looked really happy to be in Singapore and was filled with so much energy, despite having just arrived from Los Angeles. On we went to our main stop: Excelsior Shopping Centre.

Bach may be a tall guy, but it takes a special character to possess a personality that easily fills up any room. With his eyes zoomed in on the KISS figurines on display, Bach entered Roxy with the kind of exuberance that immediately warmed him up to the long-serving store owners, Richard and Paul. Sebastian, Brent and Bobby immediately started going through the boxes of records.

Pulling out a Johann Sebastian Bach record for kicks — titled The Glory Of Bach, how cheeky he is — his sense of humour matches his extensive knowledge of classic rock and heavy metal. As a diehard KISS fan, his search prioritized KISS records pressed in Singapore. Unable to find any, he left the store with an early pressing of an album as far away from theatrical shock rock as possible: Steely Dan’s Aja. 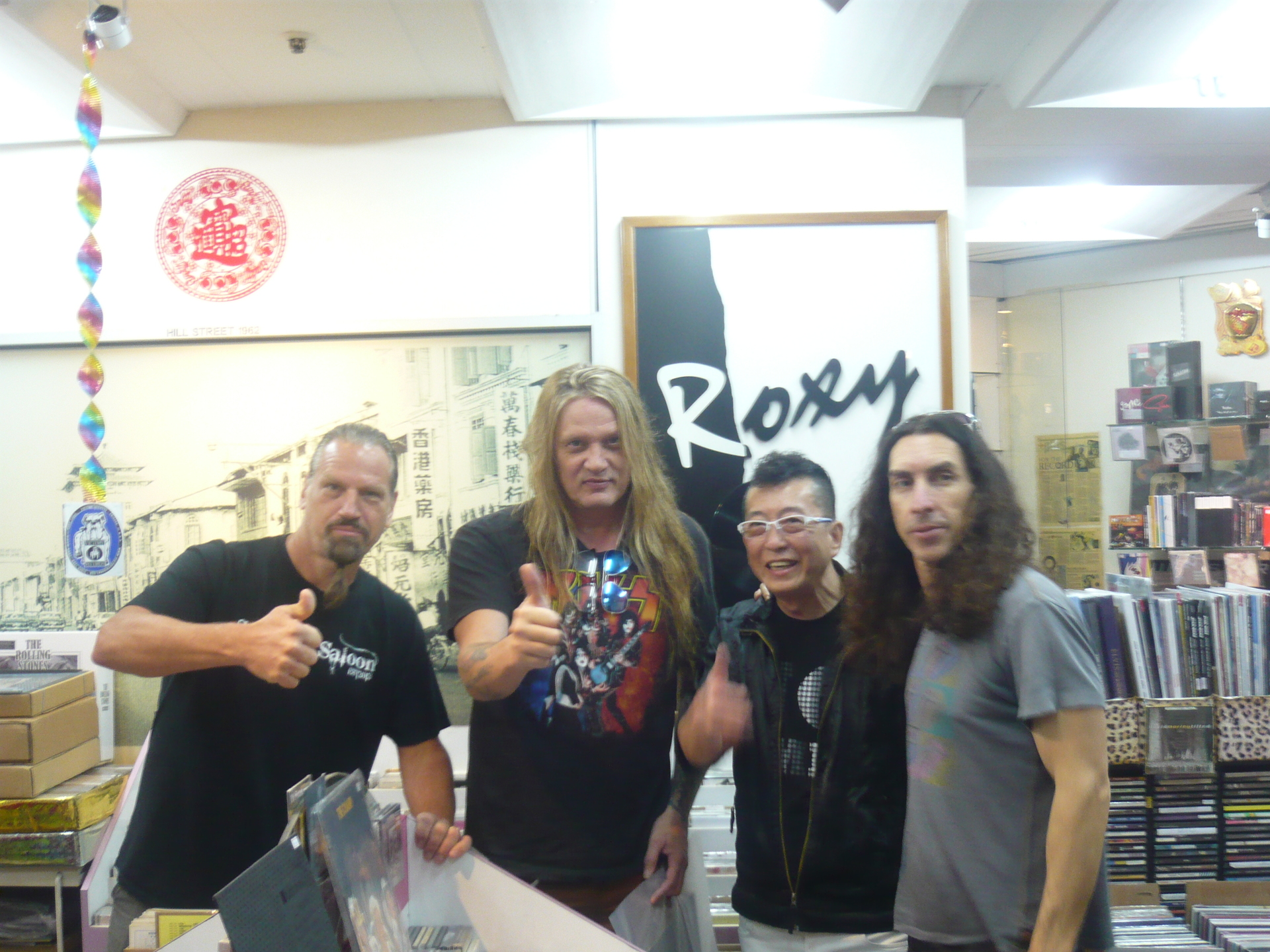 At Roxy Records with the owner, Paul Lim.

Next stop was Vinyl Kakis, which had Skid Row records on display at the entrance, giving the proper welcome that Bach deserved. I knew I had to get that record for myself too. 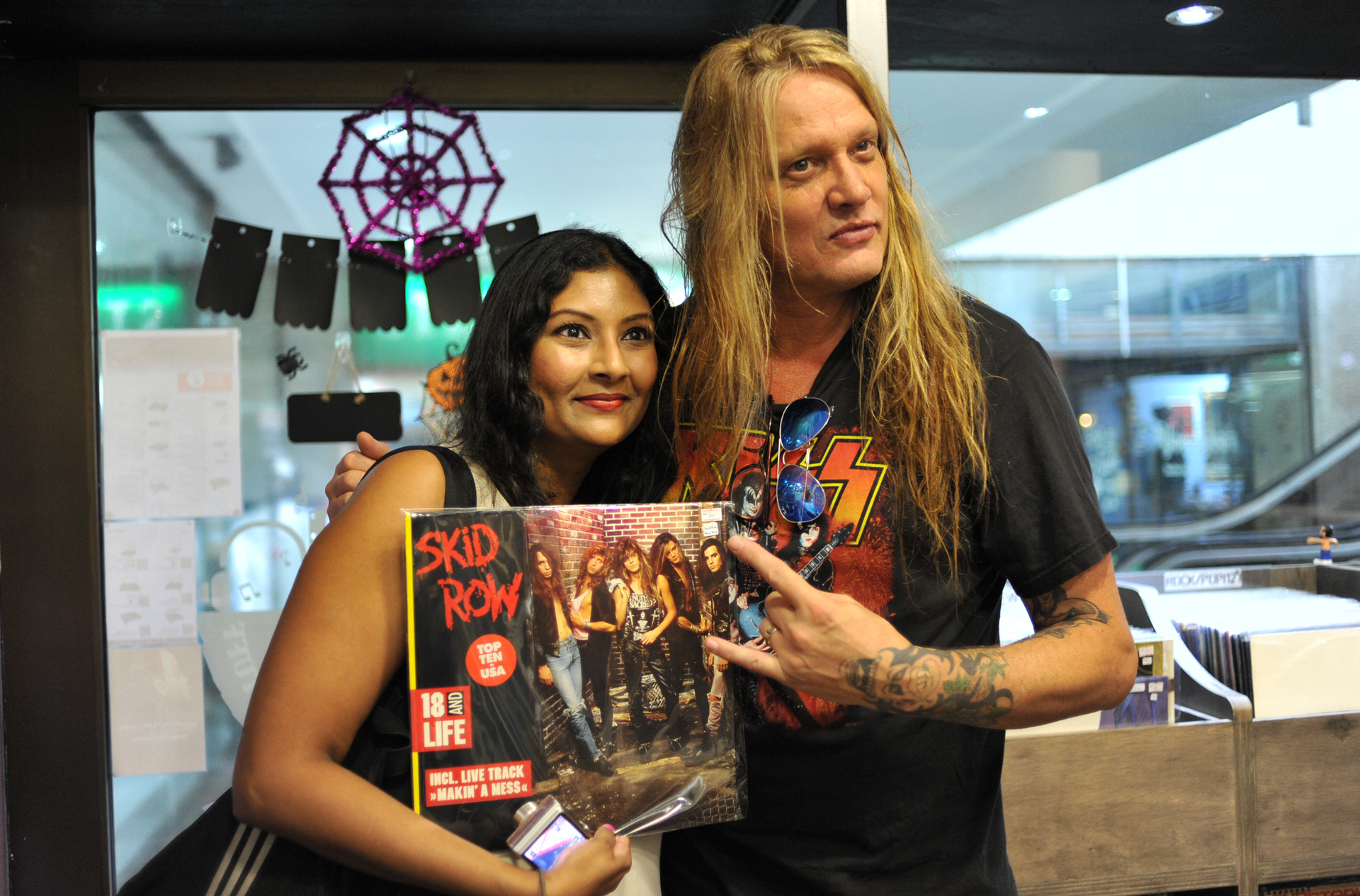 He was pulling out one record after another to buy. Vinyl Kakis has a really good selection of rock records and amazing service too, and he ended up with a unique and hefty selection.

4. The Gregg Allman Band – Playing Up A Storm

We headed over to Vinylicious Records at Peninsula Shopping Centre, and bumped into another rock legend: Singapore’s own Ramli Sarip of Sweet Charity, and passing shoppers were all thrilled to see Sebastian walking by.

Once he entered the store, Bach was drawn to Vinylicious’ precious selection of test pressings, including one by Jimi Hendrix. Pro tip: if you find a test pressing of any album at a decent price, snag it. 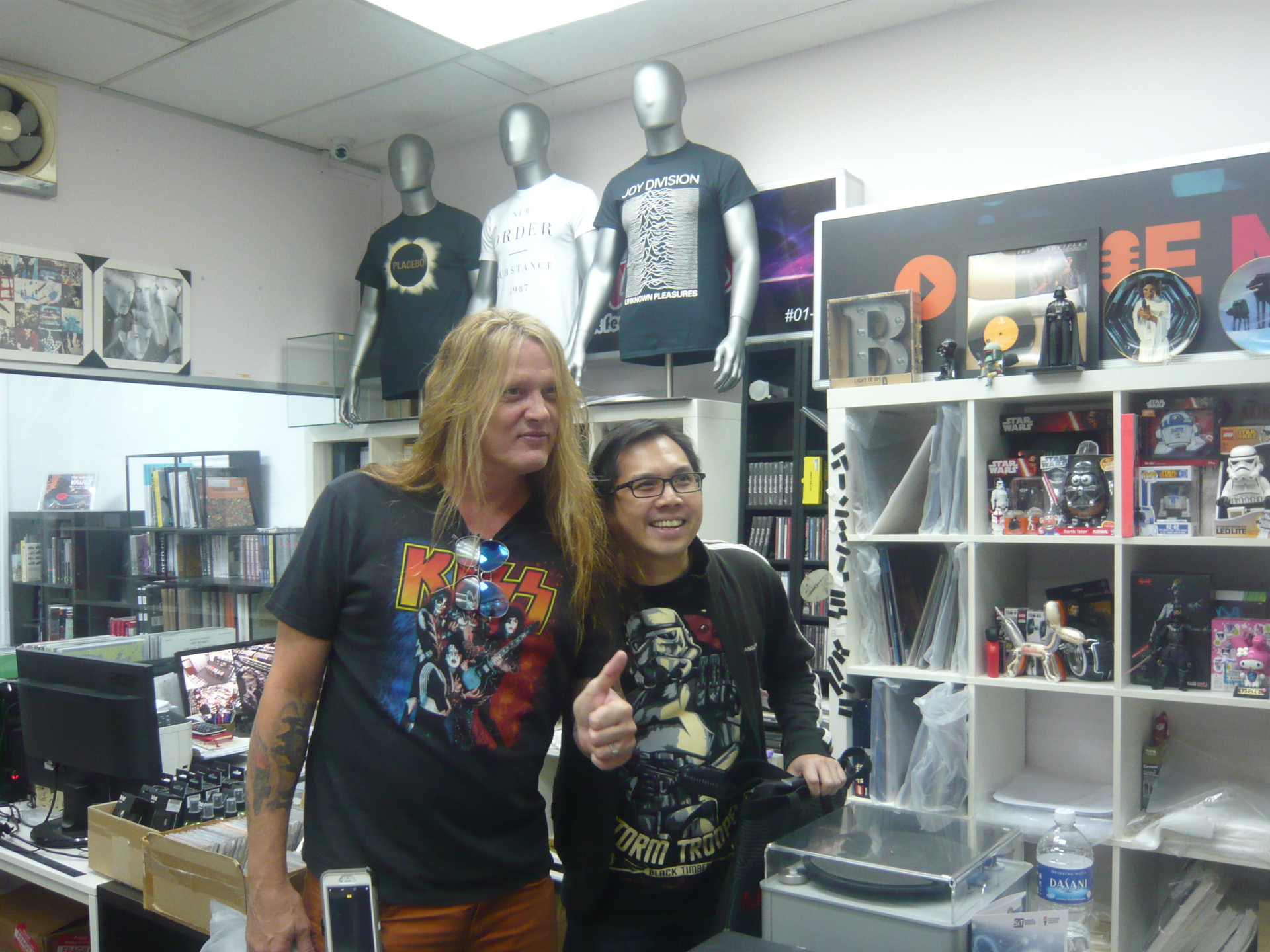 Being the central hub for hard rock merchandise in Singapore, Peninsula’s array allowed Bach to add more KISS t-shirts to his collection.

The always-friendly Mr. Sahib of Sahib International guided him around the store personally, although the KISS t-shirts at the door were almost enough for Bach. Sebastian certainly brought joy to all around with his infectious energy and spirited personality.

At Jet Win Sports Co. Bach found a Skid Row t-shirt featuring the album art of Slave To The Grind, the band’s breakout album, and he proudly pointed out how his dad painted the Slave to the Grind album cover. 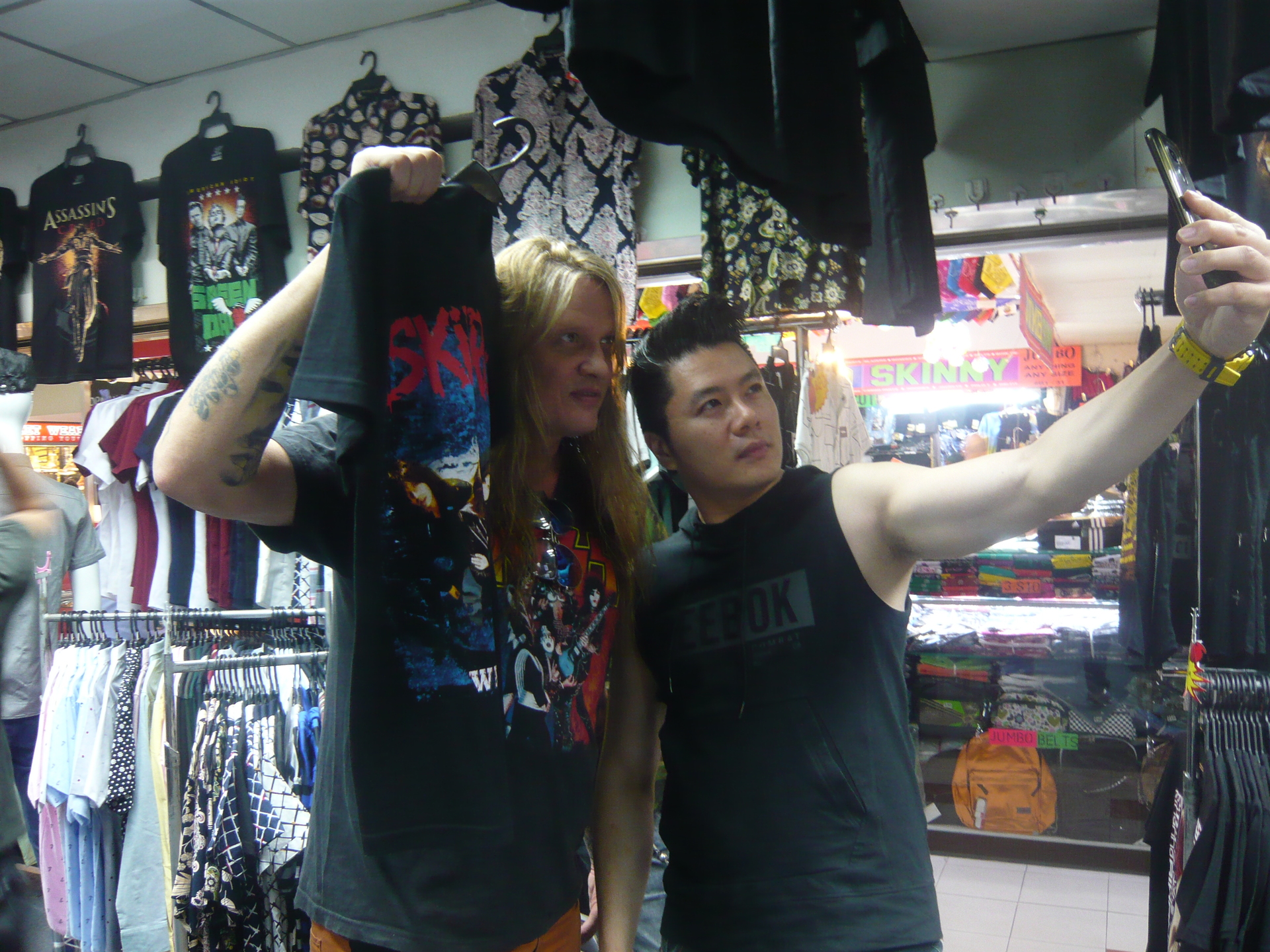 We wanted to head over to The Adelphi for more record shopping but the effects of jet lag started to strike Bach and company, so they decided to head back to the hotel for some well-needed rest before dinner.

Despite being a seasoned vinyl collector, Bach was taken aback by the variety of records in Singapore, even stores in the same vicinity. If he thought Excelsior was impressive enough, he only touched upon the tip of the iceberg. Long live rock 'n' roll, and long live vinyl!

For an extensive list of vinyl stores, check out Bandwagon's Guide to Vinyl Shopping in Singapore!