Spotify has certainly ramped up on their playlists, providing regularly-updated lists of viral singles around the world.

With the recent addition of The Beatles' full discography available on streaming platforms, their songs have dominated charts on Spotify, and it was no different on the US list, but amongst 'Across the Universe' and 'Eleanor Rigby' lies something surprising.

As it turns out, as of 2nd January, 'Sticky Leaves', a single by budding singer-songwriter Linying, has clinched itself a spot on the list at number 27. 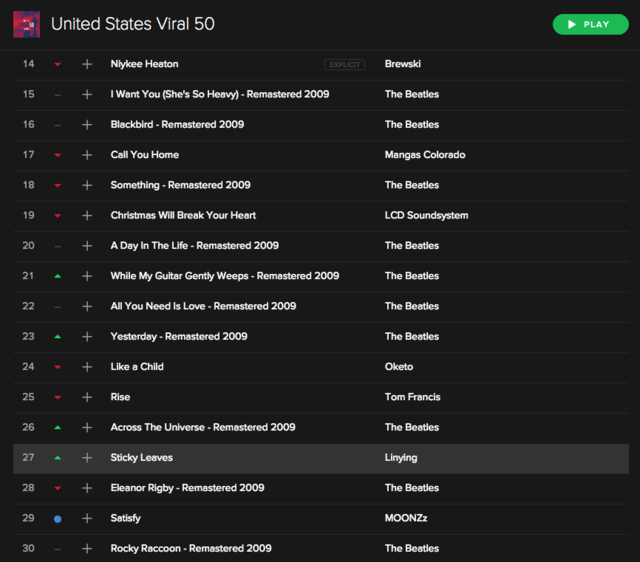 The track serves as Linying's newest release, which follows a collaboration with Singaporean producer MYRNE, who made headlines himself last year when he was revealed to be onboard the current roster of Mad Decent, the Los Angeles-based label owned by renowned EDM producer Diplo. MYRNE released 'Silver City' last November, which features the ethereal vocals of Linying.

While Linying readies the release of her debut EP later this year, 'Sticky Leaves' is already a sign of good things to come — possessing a brooding atmosphere, the song builds up progressively and meets a gentle conclusion, without a discerning chorus, but the swelling melodies and Linying's self-assured vocal presence is a reminder that the song's placement on the charts was anything but arbitrary.

Linying will be performing at the Esplanade Outdoor Theatre on January 9th, to premiere songs off her upcoming EP, along with the first live performance of 'Silver City' with MYRNE.

Read our brief interview with the singer-songwriter, before she made her Baybeats debut last year.