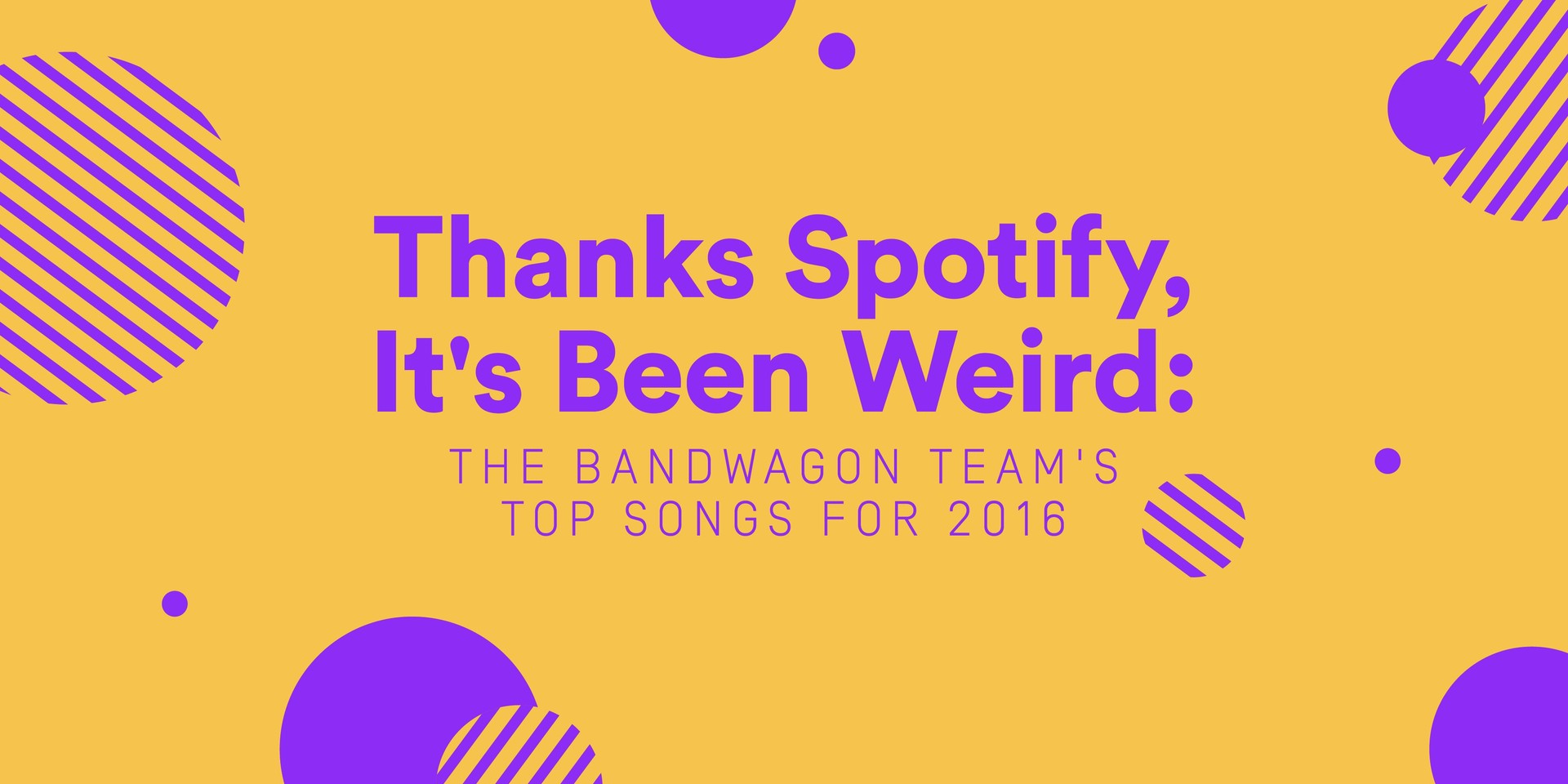 Just a few weeks ago, Spotify wowed the advertising world when they harnessed the power of data to create a massive global OOH campaign, "Thanks, 2016. It's Been Weird". This week, they rolled out their annual Year in Music roundup, starting with a personalised playlist featuring each user's 100 top played songs throughout 2016.

The Bandwagon Philippines team sought out each of their own playlists and compared notes on their individual discovery. What we found was a mixture of somber, knowing nods and outright mortification, with a dash of shameless pride—all of which you can see for yourself below.

This is our id, and it tells us, it's been rather weird indeed.

I found it interesting that more than half of my Top Songs of 2016 were not really from 2016. It's a mix of songs from artists I've been listening to since I got my clickwheel iPod (Arctic Monkeys, The Strokes, Ben Howard), the classics (I have an Elton John song that's NOT 'Tiny Dancer'!!! The Beatles, James Taylor), favourite regional acts (BP Valenzuela, Tom's Story, Charlie Lim, Cashew Chemists, NINNO), artists I've seen live at concerts and festivals over the past couple of years (alt-J, Bon Iver, Phoenix, The Kooks, Local Natives, Bombay Bicycle Club), a few pop gems (Troye Sivan, Years & Years) including a Justin Bieber track (scandales!) and a handful of One Direction hits (pre- and post- Zayn). At first I found it strange that there was a lack of Carly Rae Jepsen, The Killers and Lucy Rose, but then I realised I listened to their full albums via iTunes. Overall, I'd say this playlist pretty much shows the range of music I've been listening to over the past 8-10 years of my life. I'm curious to see what will change for next year's playlist.

I got seriously hooked on a show called Skam this year, and one of my favourite things about it is the fantastic scoring for each episode. The guys in charge are ace at finding just the right songs to underline important moments throughout the show, and they conveniently update their Spotify playlist with these afterwards, which explains #1 and #5 and the scattering of Norwegian pop on my top tracks. The rest are pretty staple listens that get me through the daily grind at work and also those that knock me right off on long plane rides. Yeah, baby girl tunes and city boy sounds make me feel super fly.

When Lucy Rose was in town just last month, I told her how 'Night Bus' has always been the perfect song that kept me company while in transit. Listening to it now and other old favorites take me back to all those long plane rides, busy train stations, and the peaceful walks around different foreign cities I managed to travel through this year. Aside from 2016 being filled with trips, it was also a year for petty heartbreaks but promising beginnings (hence the weird mix of bitter and sappy tunes hahaha!). Oh, and I started to listen to Discover Weekly regularly as well, which explains the rest of the songs on the list.

It really amazes me how all of these songs helped form how I feel about 2016. Thanks, Spotify, for this small dose of nostalgia about a year that just passed by.

I love using Spotify for when looping artists with newly released albums. It gives me time to truly immerse in the album, a habit common in music writers. This is why it's no surprise that my playlist consists of some of my favorite new albums of 2016 such as Rihanna's ANTI, and Ariana Grande's Dangerous Woman, The 1975's I Like It When You Sleep, for You Are So Beautiful yet So Unaware of It, and Mac Miller's Divine Feminine.

I'm a little surprised, though, that my top 1 played song is not Rihanna because I remember listening to her new album non-stop for months. I truly believe that ANTI is one of 2016's best albums and this the part where I recommend you to listen to 'Consideration (feat. SZA)', 'Needed Me', and 'Higher'.

This playlist, as a whole, represents my affection for pop music and my belief that there is a new heralding of its golden age as seen in my continued patronizing of Troye Sivan, Alessia Cara, Carly Rae Jepsen, HAIM, JB, Sky Ferreira and the aforementioned new The 1975 album and Dangerous Woman.

I think it's also wonderfully telling that my two favorite Hamilton songs, 'Helpless' and 'Satisfied', are in my top plays. Three words: Hamilton trash forever.

However, seeing my listening statistics makes me realize that this playlist only represents my listening habits within the Spotify app and there is an entirely different world of music I listen to that is not seen here.

What is most entertaining to me, though, is seeing Boys Like Girls and Their / They're / There in my playlist because it only proves that the emo girl in me will always live on. Peace out, 2016, you really sucked.

There are two things I noticed about my playlist: 1) I've finally immersed myself shamelessly to Korean music and 2) One can never go wrong to tuning in to your old favorite tracks. Before I write, I would usually plan a day or two where I listen to nothing else but material related to the artists or theme of the said event. This is an accurate roundabout of what I've been keeping in the loop. From Kanye West to Chairlift, and a huge chunk of K-Pop and K-Hip Hop, it's definitely my 2016 in a nutshell.

My 2016 has been pretty intense (whose hasn't, really?) and I was wondering how I'd get to remember all the little special moments I've experienced this year. Little did I know Spotify had me covered.

The songs on my playlist are a hodgepodge of soothing tunes I'd listen to while struggling to find a comfy spot on the MRT (like June Marieezy's 'Fly'), oldies that make me feel like a kid again (such as The Wonders' 'That Thing You Do!'), hits I listened to in high school and college (Corrine Bailey Rae's 'Like a Star' and Gary Valenciano's 'Eto Na Naman,' among many others) songs I'd stretch to in the morning (Charlie Lim's 'Intro'), and ones I sing in the shower (Kero Kero Bonito's 'Flamingo'). Quite surprisingly, the tracks I've created choreography for just because (Purity Ring's 'Fineshrine,' Miley Cyrus' 'Adore You,' Justine Timberlake's 'Mirrors' and Ariana Grande's 'One Last Time') and my personal anthem of sorts for particular books or stories (Birdy's 'Words') also made it to the list. Some songs are earworms from different films, plays, gigs by and with friends, and events I've attended and covered for Bandwagon. I never got over Kanye West's 'Bound 2' and 'All of the Lights' (Paradise IMF). I got so hooked on BP Valenzuela's 'Steady' after watching Quark Henares' short film How to Find Love. The influx of John Mayer songs there is because of Indie Manila's #RoomForSquares15.

I'd like to think the gems of this equally amazing and embarrassing list are the songs from Filipino artists. There are songs from well-known musicians, like Joey Ayala and Lea Salonga. Aside from BP's, there are songs from local indie artists, like Up Dharma Down, Johnoy Danao, Reese Lansangan, Nights of Rizal, sleepersecond, Paincake Patrol, and Between Archery and Olympic. I confess that I did have Alisson Shore and Gnarlydork's 'Sundae' on loop for weeks, so I'm not surprised they topped my 2016. This song is from two artists I really enjoy listening to and seeing performing live, so I recommend you listen to them (and ignore some of the cheesiest songs ever on my playlist).

I gauged the passage of time in 2016 by how long it's been since David Bowie died. I mourned for months. I don't use Spotify much but it did have the deep cuts and bootlegs that helped me grieve.

This playlist would've reflected my year better if it had Haruomi Hosono, Joni Mitchell, and Cinderella (the Manila Sound band, not the metal one). I also listened to Eraserheads' Sticker Happy while we were recording The Buildings' album.

Also, yes to Aaliyah being number one. My parents named my little sister after her and I wish we could traded names instead.

P.S. I haven't been keeping up with new releases—I usually discover music through friends' recommendations—but my favourite new music of the year would be 'Random Schizoid Godhead' by Yurei, 'Thunder Island' by Tropical Death (whom I saw after I relocated to Tokyo in September), and 'Puberty 2' by Mitski. The new song that Bullet Dumas played at the November 30 rally made me tear up while I watched the livestream in my little Tokyo apartment.

Looking at my playlist didn't surprise me at all, but if other people see it they might be a little weirded out. It ranges from Justin Bieber to Periphery, local acts like Clara Benin to Curbside. Looking at my playlist now makes me realise how diverse my taste in music is. It doesn't matter if I play in a rock band, as long as it sounds good to my ears, I would listen to it!

I don’t think my listening habits were significantly different from that of last year’s, but somehow, this playlist doesn’t reflect that. Out of 101 songs, I would have thought that Spotify, with its mostly decent ‘Discover Weekly’ playlists (where most of these songs are from), will capture my relationship with music this year quite accurately. Compared to 2015’s year-end compilations (Year In Genres, etc. – which I thought were very interesting) I think my six-year-old iPod Classic’s ‘Recently Played’ playlist outdoes Spotify any day. It’s largely comprised of SoundCloud producer cuts, with some songs I streamed frequently at work to tune out background chatter, around 20 that I genuinely loved (that’s just around 19%!), and some I really enjoyed looping for days (i.e. Anderson .Paak’s songs). There’s a song in particular that was egregiously inaccurate to be included in this because a) I played maybe half of it when it popped in my notifications but thought it was terrible, and b) never heard of it again – so yeah, I am pissed. I am very particular in curating playlists.

To rub salt into the wound, James Reid’s ‘Randomantic’ was nowhere near on top of the list. Spotify ‘My Top Songs 2016’, like many things about 2016, you suck.

So, it was amusing to see one mix which covered all of the musical orientations I have been listening to this whole year while at the same time look at it all merge together. 'This Is Gospel' by Panic! At The Disco ranked as my top song was actually pretty funny because it was my alarm-slash-go-to-morning-song for quite some time. Followed by 'Alexander Hamilton' from the original soundtrack of Hamilton musical, which is quite self explanatory because I'm obsessed with it—#HamilTrash as one would say. Moreover, making it to the rest of my top songs: 'Holocene' by Bon Iver, 'Face Like Thunder' by The Japanese House, and 'A Case Of You' by James Blake very well described my music taste. Probably a perfect representation of what I'm most into. These tracks were much more personal to me but despite the obvious variety. I'm positively surprised how my all-time favorite band, The 1975, didn't make it to the first five of my list. However, I still think this mix represents my music taste quite well and how my year 2016 went after all.

My 2016 playlist consists of what my friends want to listen to, nostalgic songs from my high school days and news songs from local indie bands.

My 2016 list is a mix-match of both local and foreign songs, all of which to accompany me in chill moments, or in situations wherein I need to keep my chill *cue in Ang Bandang Shirley's 'Umaapaw'*. On days when I want to feel nostalgic, I listen to my mom's faves like The Carpenters, and some Japanese jazz which I can only find on Spotify.