When five individuals came to audition for premiere talent-spotting competition, X-Factor UK, they were ill-prepared and didn’t progress into the subsequent stages as solo candidates. Judge Simon Cowell had them collaborate and sent to round two as a group. A shy-looking Harry Styles then decided to name the group One Direction, as they had identical aspiring goals in mind to win the competition. With less than a month in preparations together, the team left the competition in third place, with their song ‘Forever Young’ and success in winning a £2m contract with Syco Records.

Four years on, they have begun their parent-friendly tour of their fourth album titled Four. But what is startling is the success they have been reaping as a new-age pop boyband. Age old traditions have been scraped in place of newer ideas, with social media accounting for a great measure of success, (I recalled only discovering about Westlife’s then-new album Coast to Coast weeks after its release when visiting CD Rama) with a collective total of 120.7 million followers, they are ever-connected with fans through self-managed tweets. Synchronised dance steps were the first to go, while a parent-friendly image of no drugs meant they were handed a bigger slice of the pie for kids with strict parents.

When 1D-mania hit town, the twitter sphere went about its usual crazed and manic appearance, reports were thrown out which included fans trying to bag the air that Harry Styles was breathing to the alleged news that Zayn Malik was delayed by his flight from Korea leading to the late start. 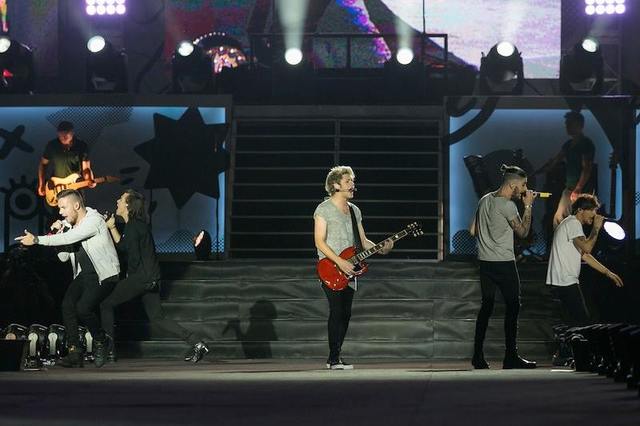 Sharp trendy visuals with pop-art letterings and scribbles fill the screen first, as fans proudly parade their handmade signs, one fan announces her 600-mile journey to catch the show while another cleverly wrote “show me your payne train” (Google it). There was little fan-fare involved in their arrival, but the five-piece from London needn’t any grand introductions nor red-carpeted entrance as the stadium erupted from sight alone.

Opening track ‘Clouds’ determined that the show was not to be any tight-lipped or reserved situation as fans shriek and cheer in exhilaration as their separate idols appear onto the large screens in pixel and dots. If you were wondering, Niall Horan drew the loudest reaction, a derivative of his guitar-playing abilities and bubbly personality. Another member in the crowd aptly points out that she adores him for his non-conformity with regards to his fellow tattooed bandmates.

In true maniac style, fans in the upper-tier seats broke out in waves from their seats and into the standing area through lapses in the barricades, security were kept aware of the situation but none willing to tackle the outlawed youthful. Like the other trashing and vigorous shows on the tour, fans behind the barricade were the first to wave the white flag as exhaustion and a lack of water were prime reasons which led to their extraction from the crowd. Encouraging advice were prompted by Styles and Louis Tomlinson to take a step back in the interest of safety but brushed off almost easily as they surged and mounted for the opposite direction. 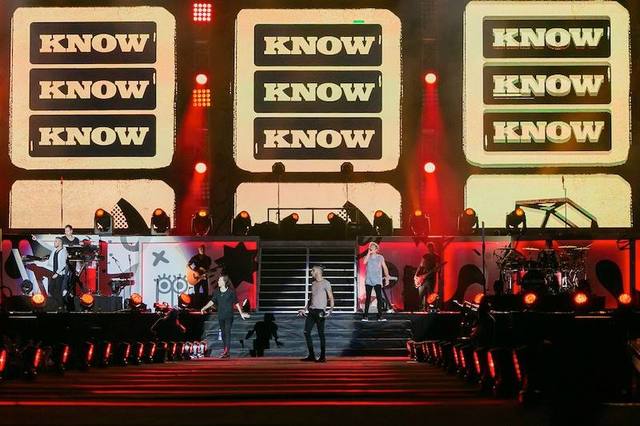 Tracks from the earlier albums had a howling response as identifiable hits, 'One Thing' and 'What Makes You Beautiful', were played back-to-back. Loyal fans were rewarded with a bulk of the set list originating from Midnight Memories. In 'Story of My Life', fans sing along with eyes closed in imagination as the heart-throbs onstage recount all the things they would do to their lover behind a rapturous beat.

On talent alone, the boys were in abundance. There was no need for backing tracks nor back-up singers with large vocal ranges; each member had their own vocal capabilities but no one distinct voice stood out and when layered atop each other, a criss-cross of velvety palpable serving of sugar pop hit is the direct by-product.

In ‘Best Song Ever’, there was a chance for individual representation with Styles and Malik given solo portions to showcase their chops, Styles sings with a cheeky yet charming angle as he points and swings at infatuated fans while Malik goes for an uninterrupted falsetto in the bridge. However, it is in the chorus which speaks truth to the analogy, ‘strength in numbers’, a tenacious hook created with no room for any swell in the middle.

While there were no live fireworks in the celebratory encore, many would agree that the shows you experience in your teenage years are the ones worth remembering, and at the same time, life-shaping. While it’s clear that One Direction have only been active for five years and due for their own individual pursuits, the cumulative music made till date and their experience at Sports Hub would be one fondly remembered. Even though, we wouldn’t be anxiously in wait for their era-spanning anniversary tour 25 years later, I’m sure my screaming kids would. 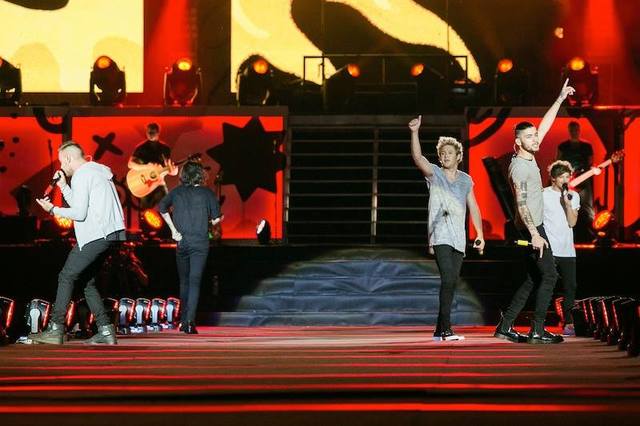