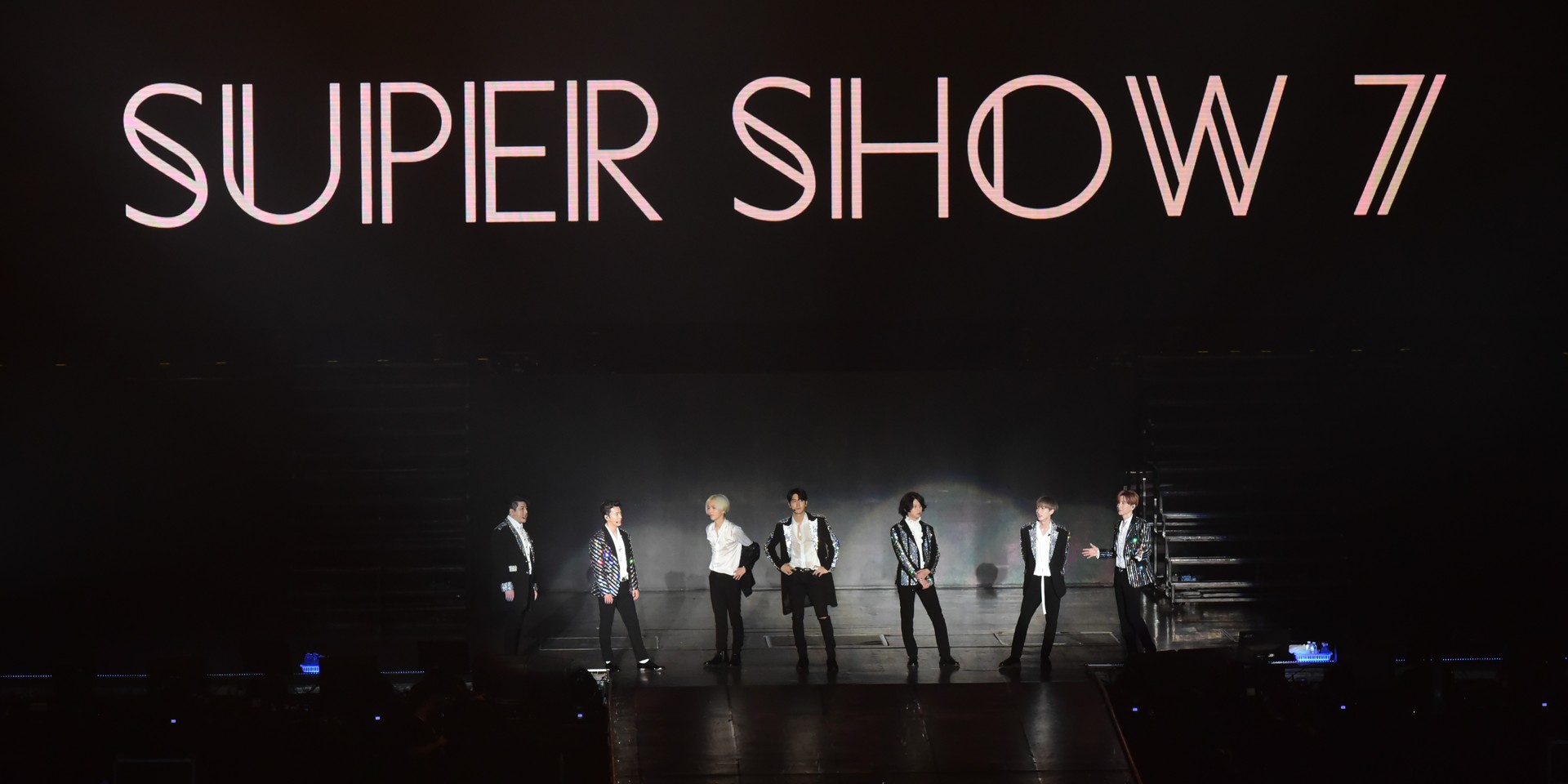 Super Junior are currently four members down, but the smaller lineup hardly prevented the K-pop veterans from charming 7,500 fans at the Singapore Indoor Stadium this past Saturday.

With the help of backup dancers, the seven members opened to a roaring crowd – many dressed in the group's signature colour, blue – with ‘Black Suit’, their latest comeback track from the PLAY album, released on the group's 12th anniversary last November. Their last concert here in 2015 had a 10-member line-up. 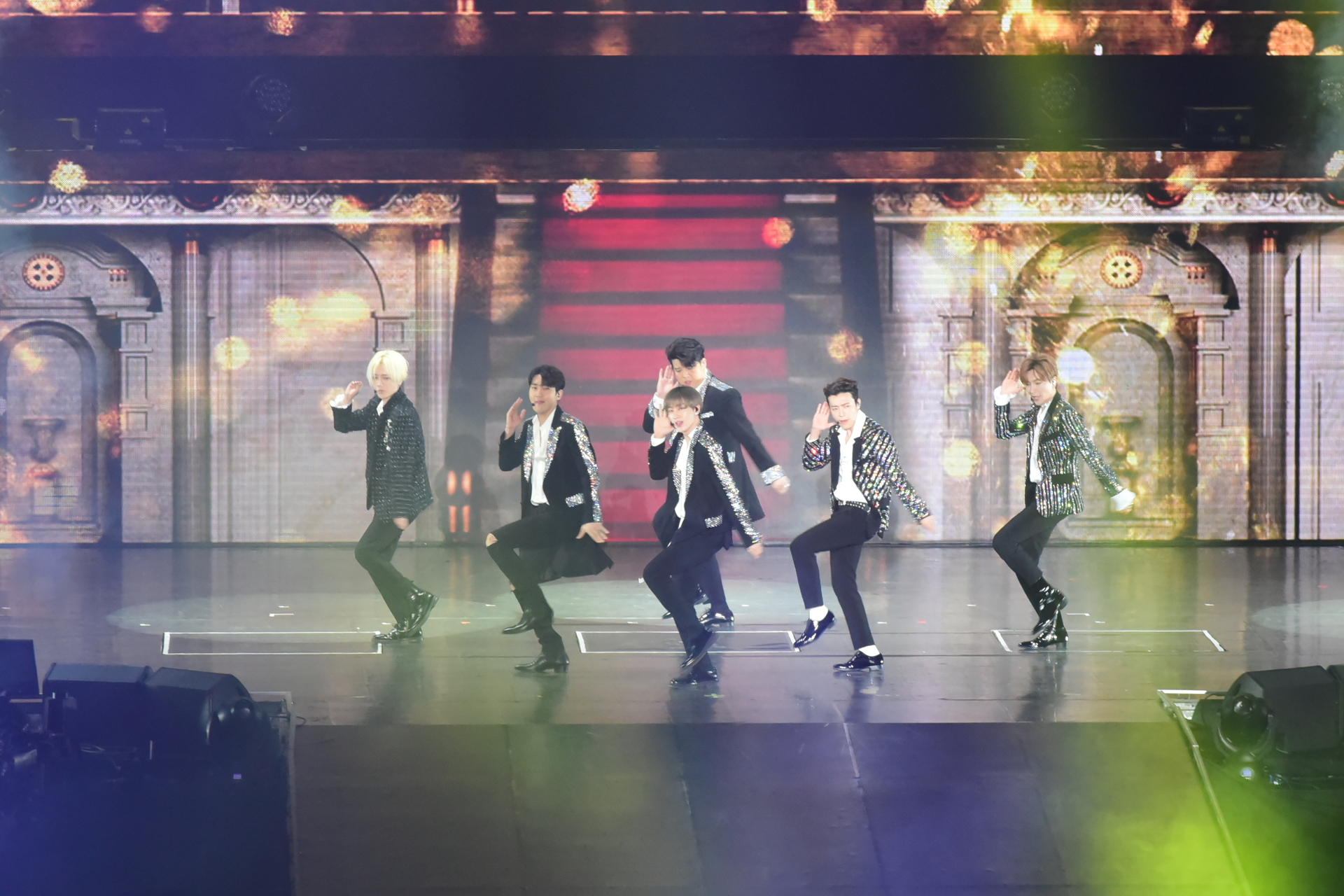 Presented by organisers One Production, the energetic and fanservice-heavy concert was the group’s first overseas stop of their Super Show 7 tour. The show came four years after their last full-length album, Mamacita, and marked the return of members Dong Hae, Eun Hyuk and Si Won from military service.

With members Shin Dong and Eun Hyuk taking on video clip director and stage director roles respectively, the three hour-long affair was less complicated than their previous concerts. It helped that the triangle-shaped stage was close to the audience, such that fans who splashed out $288 on Category 1 tickets were close enough to reach out and almost touch their idols. With the increased proximity, fans hardly cared about the lack of gimmickry.

After ‘Black Suit’, ‘Scene Stealer’ and ‘Mamacita’ — all recent dance tracks — the members finally paused, huffing and puffing as they greeted the audience in a mix of Korean, English and Mandarin. The audience responded to the banter with Korean cheers, prompting some of the members to comment that their fans’ Korean had improved. 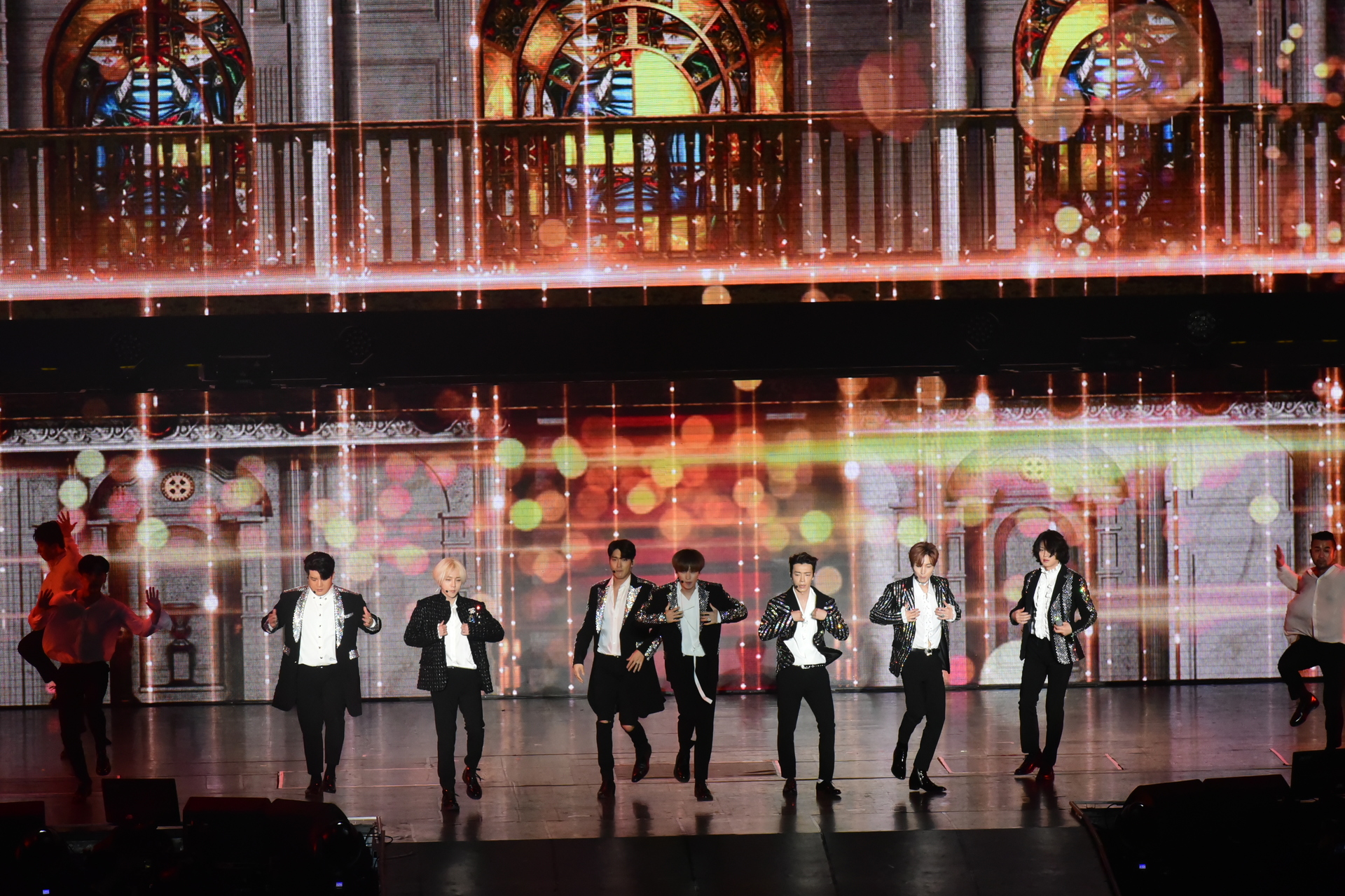 Super Junior followed the high energy opening with mellower tracks and ballads from their latest album like ‘Too Late’ and ‘One More Chance’. Then, suddenly, they embarked a trip to the past with the 2009 dance hit 'It's You', eliciting a cheer of recognition and singalongs from the crowd.

Then, as if to reset the mood for the rest of the night, the group disappeared backstage and reappeared in Power Ranger costumes, performing their buoyant trot song ‘Rokkugo’. The idols bounced around the stage with such energy even fans in the seated areas followed them around, waiting with their handphone cameras hoping for a wave or some eye contact.

The group continued with headboppers from their new album like ‘Runaway’ and ‘Too Many Beautiful Girls’. They ran around the stage, throwing towels and rubber ducks into the crowd, and even lay down in front of the cameras to the screams of many fans. Some of them climbed down to the standing area to shake hands and take selfies with fans, which is unusual for K-pop groups who perform here. 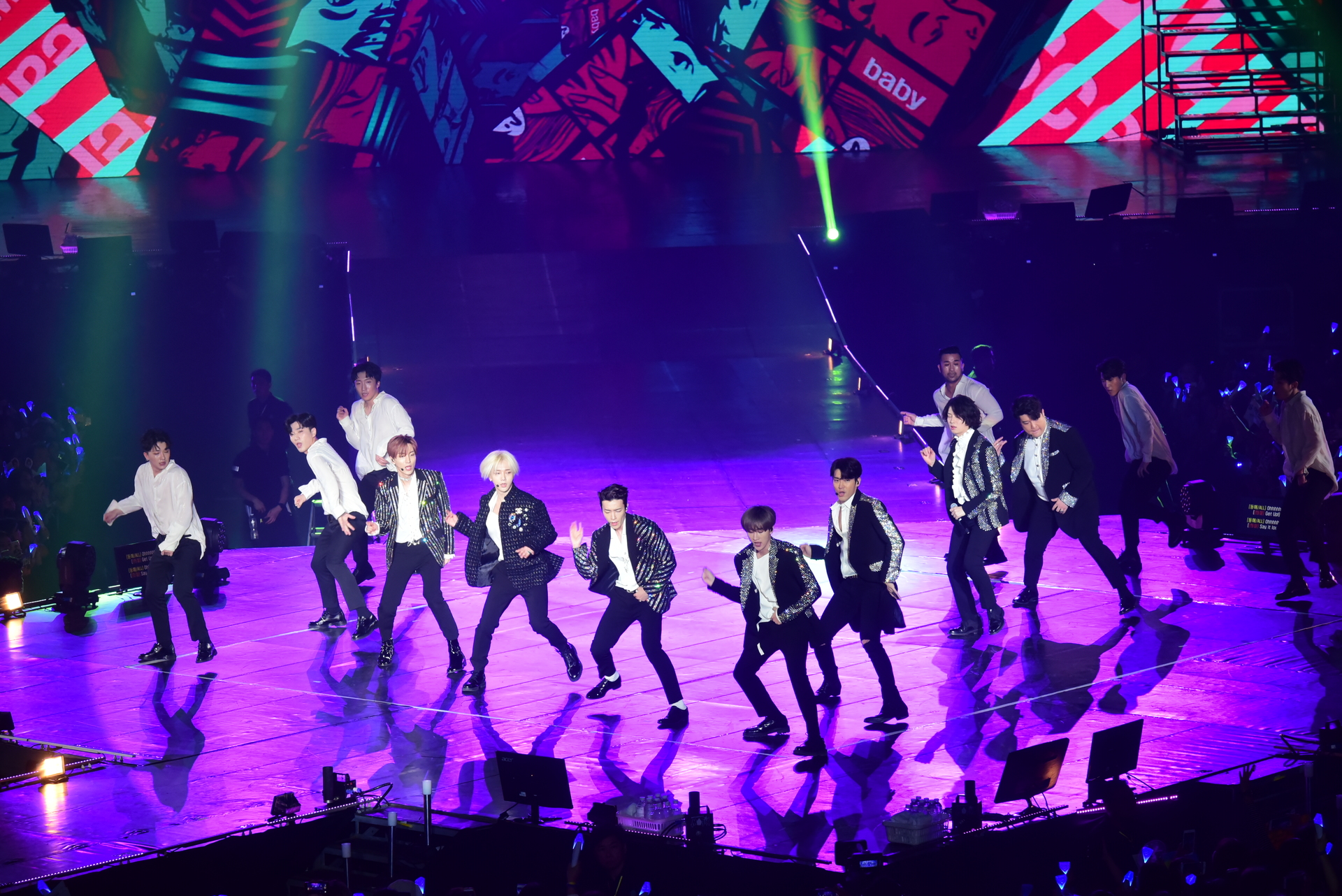 Then, the moment everyone was waiting for arrived. The familiar beats of the group’s 2009 dance hit ‘Sorry Sorry’ started to play, and well-rehearsed fanchants echoed in the arena as members danced to the whole song from start to finish. The group powered through rousing rock remixes of hits ‘Mr Simple’ from 2011 and ‘Bonamana’ from 2010, while Hee Chul, who can no longer dance due to his injuries, accompanied them on a drumset.

After thanking the audience and disappearing backstage, the seven members returned for the encore, closing with ‘Miracle’, a staple of any Super Junior concert. Fans sang along and waved their sapphire blue lightsticks to the feel-good classic from the group’s very first album. 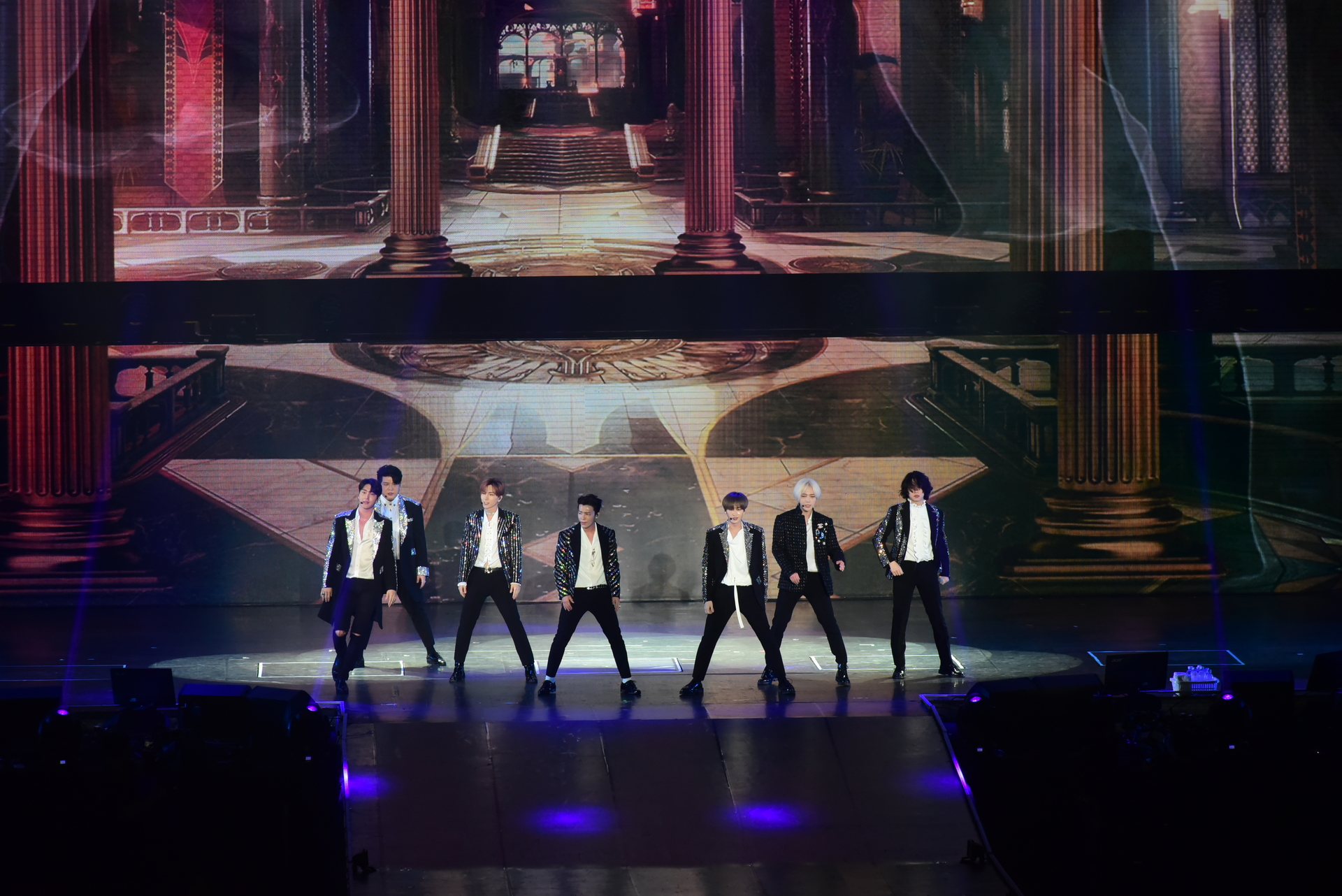 At the very end, Super Junior played a voice recording from missing members Ryeo Wook and Kyu Hyun, who apologised for being unable to participate due to military service. In a moment of maturity befitting his 34 years, leader Lee Teuk also read a letter to the audience, acknowledging the group’s evolving fanbase. He said: “The same girls who have listened to Super Junior and have always supported Super Junior became college students, someone’s girlfriend or wife, and a child’s mother.

“Time has passed but you are still by our side. We are forever grateful for your support.”