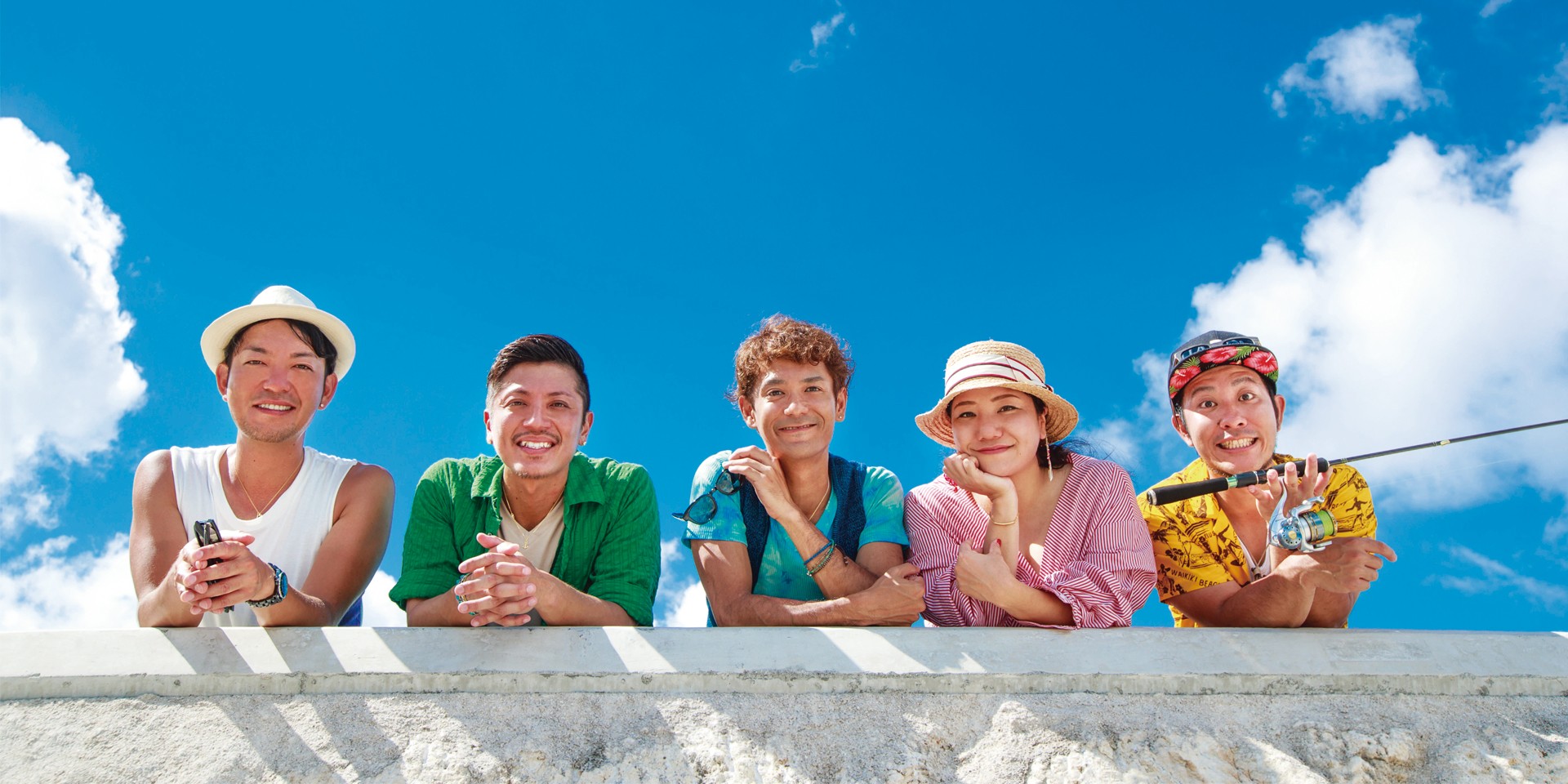 2018 will mark J-rock band HY's 18th year in existence after forming in high school. HY hail proudly from the city of Uruma in the Okinawa prefecture, and even more specifically from the neighbourhood Higashi Yakena, which they pay tribute to with their band name.

Pulling in rock, indie, pop, rap and reggae into their music, HY are eclectic and prolific, having kicked off their career with Departure in 2001 and their sophomore album Street Story, which topped the Oricon charts for four consecutive weeks upon release in 2003, no small feat for an independent band. Their most recent work is Chance, which they released last March.

HY are well-loved in Japan: they have played in all 47 prefectures, and in 2009 packed 20,000 fans into a 10th anniversary street performance in Okinawa. The intrepid band has also toured abroad, and continue to bring their music to different places: this year they will take on shows in Peru, Brazil and Singapore.

Here's our interview with four of HY's five members – Hideyuki Shinzato (vocals), Shun Naka (drums), Shinsuke Kyoda (bass) and Yuhei Miyazato (guitar) – about their hometown music scene, their music-making process and what they've learned about each other since those halcyon high school days.

What are some of the most notable changes you’ve seen happen in the Okinawa music scene over the course of your career?

Hideyuki Shinzato (vocals): "Maybe music has changed as nature gradually changes but I believe Okinawa music will stay the same as long as we have this beautiful blue ocean."

Shun Naka (drums): "I haven’t really felt the changes. [The] Okinawa music scene has been one of a kind since I started the band."

Shinsuke Kyoda (bass): "I feel like there are less bands in the scene now."

Yuhei Miyazato (guitar): "I haven’t felt a major change but maybe less bands these days. When I was younger, it was more vibrant due to the band boom. I feel like music was closer to everyone before."

Why release only albums, not singles?

Hideyuki: "All of us write songs and lyrics and it’s not easy for the fans to understand how we are just with [a] single. Album[s] can express who we really are. "

Shun: "It’s because we can record more songs in an album."

Shinsuke: "[An] album itself represents us so we haven’t really thought about releasing 1 track as a single."

Yuhei: "We make album[s] in hope of expressing our characters and who the band is."

You release music very regularly (2 to 3 years between album) – is it easy for you to write music? Have you ever encountered writer’s block?

Hideyuki: "When I make new music, it often comes from something new or something I experience for the first time. When I try to take those in, I bump into many walls. Accepting the struggle is more important than breaking the wall. That’s when I encounter new feeling. Writing music isn’t easy but the struggle is also fun. I want to take it at our own pace."

Shun: "Our goal is to release new music every year. I enjoy making music. Sometime, I get stuck and completely hate it but I can keep going thanks to the support from the band."

Shinsuke: "So many times! After making a phrase, I can’t get the right groove at the recording or just trying to get the right vibes. I’m always learning. "

Yuhei: "For me, I always have this wall when writing music. However, I take the band members’ idea and it ends up being better than I imagined. There are bumps but I enjoy it."

Your approach to music has always been flexible, experimenting with different sounds and genres. Is there something in songwriting you still haven’t tried that you would like to?

Hideyuki: "Through music, we have visited various countries. I want to feel the local music and rhythm with my heart and body, and then incorporate that to HY’s music."

Shun: "I don’t really feel the challenge in songwriting. I just make music based on how I feel on daily basis."

Yuhei: "I always feel inspired from overseas and my head gets full with different rhythms and everything. I hope we can connect that to our music."

What music are you listening to? What are you inspired by in today’s Japanese or Okinawa music scene?

Hideyuki: "I’d listen to any music that touches my heart no matter what genre it is. I love music and that is something I can express myself the best."

Shun: "I used to listen to rock mainly but now I listen to various genres."

Shinsuke: "I listen to various music."

Yuhei: "Sounds of Sanshin (Okinawan musical instruments). I’m proud of it and hope to play it in other countries."

You’ve known each other since high school. What have you learned about each other through your time in the band together?

Hideyuki: "Patience, hahaha! Team work and communication is the most important thing."

Shun: "To keep the band together, we need to talk and support each other."

Shinsuke: "Through music and off time, I learn a lot from each other."

Yuhei: "We started out as friends so we will keep this together as always!"

HY will be performing in Singapore for the first time at Zepp@BigBox on 17 March. There wil be a hi-five session with the members for all attendees after the concert. Tickets available here.

HY are also taking song requests for the Singapore show – comment with the song you most want to hear at the concert on this Facebook post and you'll be in the running to win a Meet & Greet with the band. HY will also be picking the person with the best Instagram photo of the concert tagged #HYSG to win an autographed photo.