People were still streaming in when a blitzkrieg of lights bathed the bowels of the Singapore Indoor Stadium in a multi-coloured frenzy as the unmistakeable sound of Eric Clapton’s strat pierces through the air. Without warning, the band kicks into full gear with the opener 'Pretending' to warm up our ears and pave the way for an evening of Slowhand and his band at their best.

Needing no further introductions, Eric Clapton’s latest foray into our island state since 2011 brought everything that you’d expect out of the three-time inductee to the Rock and Roll Hall of Fame. Epic drawn-out guitar solos, an ensemble of virtuosos trading riffs; you’d be getting one of the purest blues experiences that you’ll ever have the honour of witnessing on this planet, and that’s no hyperbole.

What you won’t be getting a ‘greatest hits’ fan-service kind of show, so apologies to all you fans of 'Wonderful Tonight'. Almost half or more of his setlist are blues standards, comprised of compositions by his favourite recording artists, interpreted through Clapton’s distinct musical styling and his excellent 6-piece band. 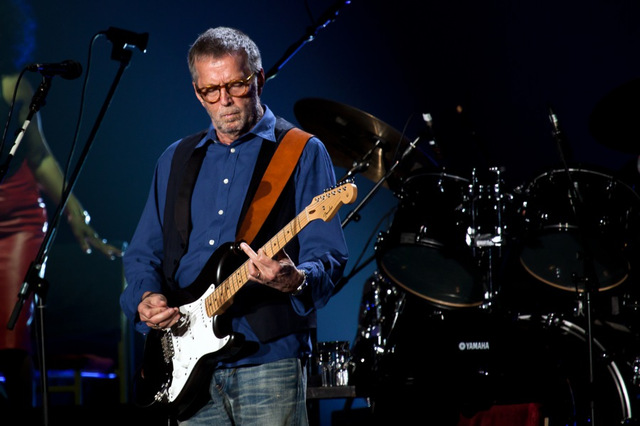 Well into his 5th decade in music, the 68-year-old English guitarist still took to his songs with a steely focus, respecting the conventions of a heavily guarded traditional school of music, while retaining the legendary high-volumed extended solos from his Cream days. And this is usually when the stage comes alive – forming a trifecta of glorious one-upmanship with Chris Stainton on keyboards and Paul Carrack on organ, Eric Clapton makes jamming look fun, spirited, and soulfully poignant all at once with debonair effortlessness. 'Little Queen of Spades', 'Key to the Highway' and 'Hoochie Moochie Man' quickly comes to mind in the showcasing of sheer musicality.

Vocally, Clapton delivered the goods albeit slightly straining on a few tunes along the way, such as 'Tell the Truth'; whether it’s the result of touring fatigue or simply age catching up, one can only speculate. There to share vocal duties, however, was Paul Carrack, a veteran performer and artist with an impressive track record and an even more impressive voice. 'How Long', a song that he recorded and made famous with the band Ace, even made it on the setlist, and it was exciting to hear this timeless rock tune pairing Carrack’s warm and powerful pipes with Clapton’s guitar musings.

But it was Clapton singing what was probably his finest rendition of Bob Marley’s 'I Shot The Sheriff' that took the figurative cake in my bakery.

His reaffirming, gruff voice sure did the classic reggae tune justice, but it’s a different kind of singing we’re talking about here. Mournful and subdued at first, before a mighty crescendo to an uplifting and triumphant end, Eric’s true voice lies in the space between his fingers - honed throughout decades of perfecting his craft - and the fretboard of his trusty black Fender Stratocaster. 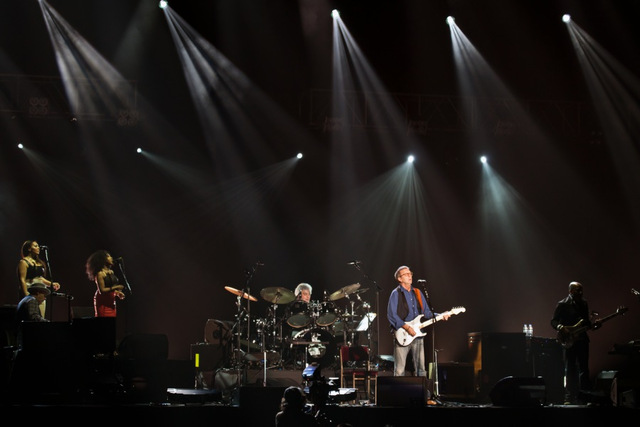 What differentiates the passionate musical collaborator from hordes of other guitarists is how lyrical and articulate his guitar work is. It may not the most technically sophisticated display by any means, so this raises the question as to why his style remains one of the most emulated by aspiring blues or rock guitarists. It all comes down what he omits rather than what he does play; the touches he adds than the notes he emphasizes. Anyone can bend a note or pull off a lick flawlessly, but none can do it with the eloquence and melodic quality that he imbues in his phrasing. The subtle nuances in his playing were further accentuated when he goes acoustic for tracks like 'Driftin Blues' and of course the crowd favourite 'Layla'.

Another obvious thing you’d notice is just how clutter-free the stage is; literally, other than a few cables here and there, you can pretty much slide a pint of beer from one end to the other almost unimpeded. Awkward alcohol analogy aside, the point here is that in a day and age of oversized effect boards and the mantra of adding more to your sound, Clapton is an avid purist in trusting the sound of well-crafted, quality instruments, and it was refreshing to see everything but the bare essentials removed. And the result was phenomenal; it’s so easy to forget how sweet a guitar’s true sound is when it’s buried under layers and layers of effects, when all you really need is the right hands to bring out the best of it.

From a few surprising omissions from his setlist, and his general aversion to small talk on stage, it is evident that he’s not here to invite people into his world; he’s just playing the music that he loves. And while some of the blues numbers can be rather daunting to swallow one after another, it’s not every day you get to witness the ultimate union of a master artist and his instrument of choice. That’s what makes Eric Clapton’s guitar playing such a pleasure and privilege to experience live, and his legacy such an enduring one.