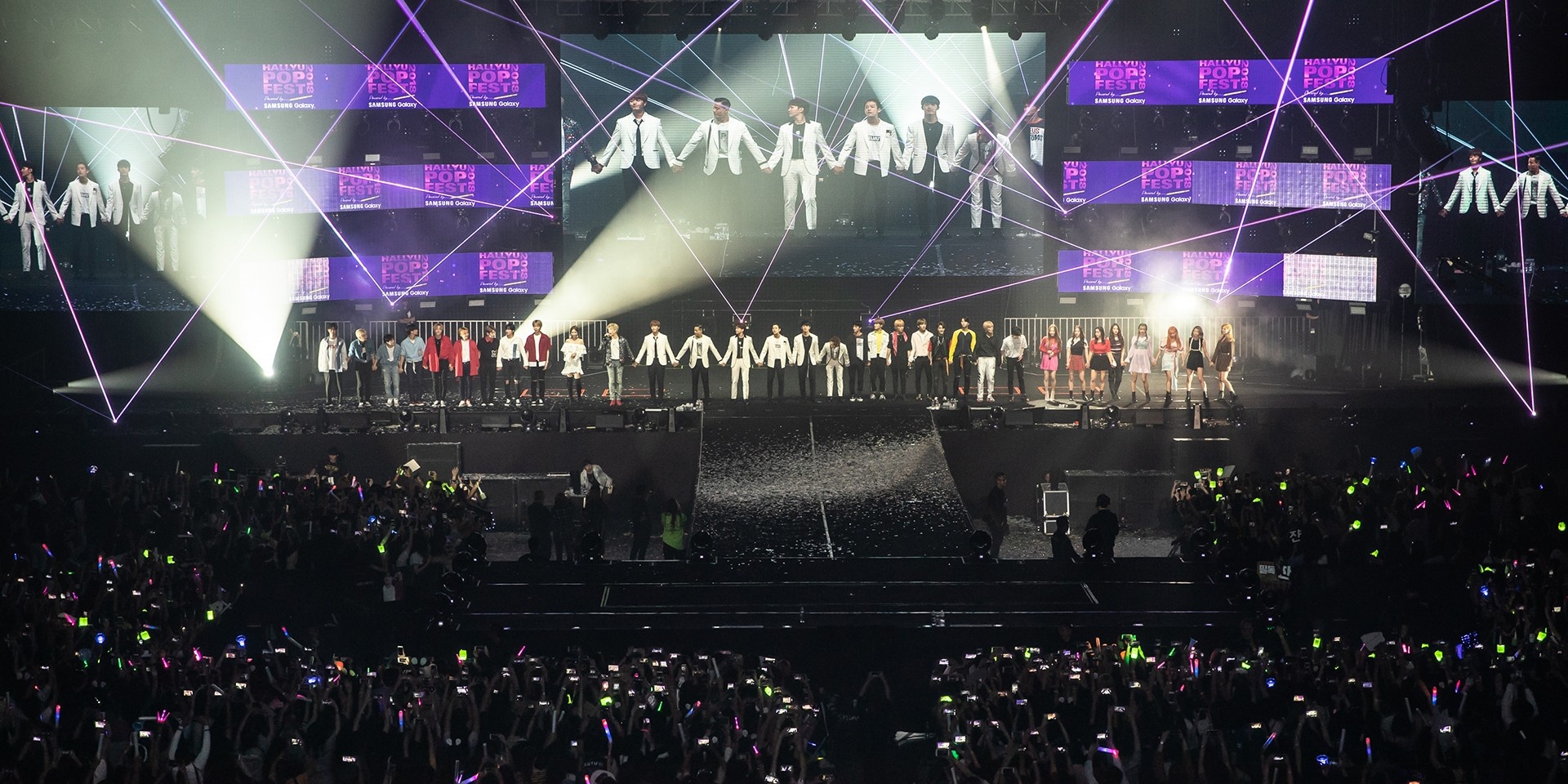 Last Friday, Singapore's first-ever K-pop music festival, the HallyuPopFestival (HPF) unfolded in all its Technicolour glory. The exciting lineup ranged from old-timers like Apink, BTOB and Taeyeon to Super Rookies like MOMOLAND, UNB and Wanna One. The weather was crazy, the fans were insane and the stages were wonderful. Here's the good, bad and notable of what went down during that incredible day. 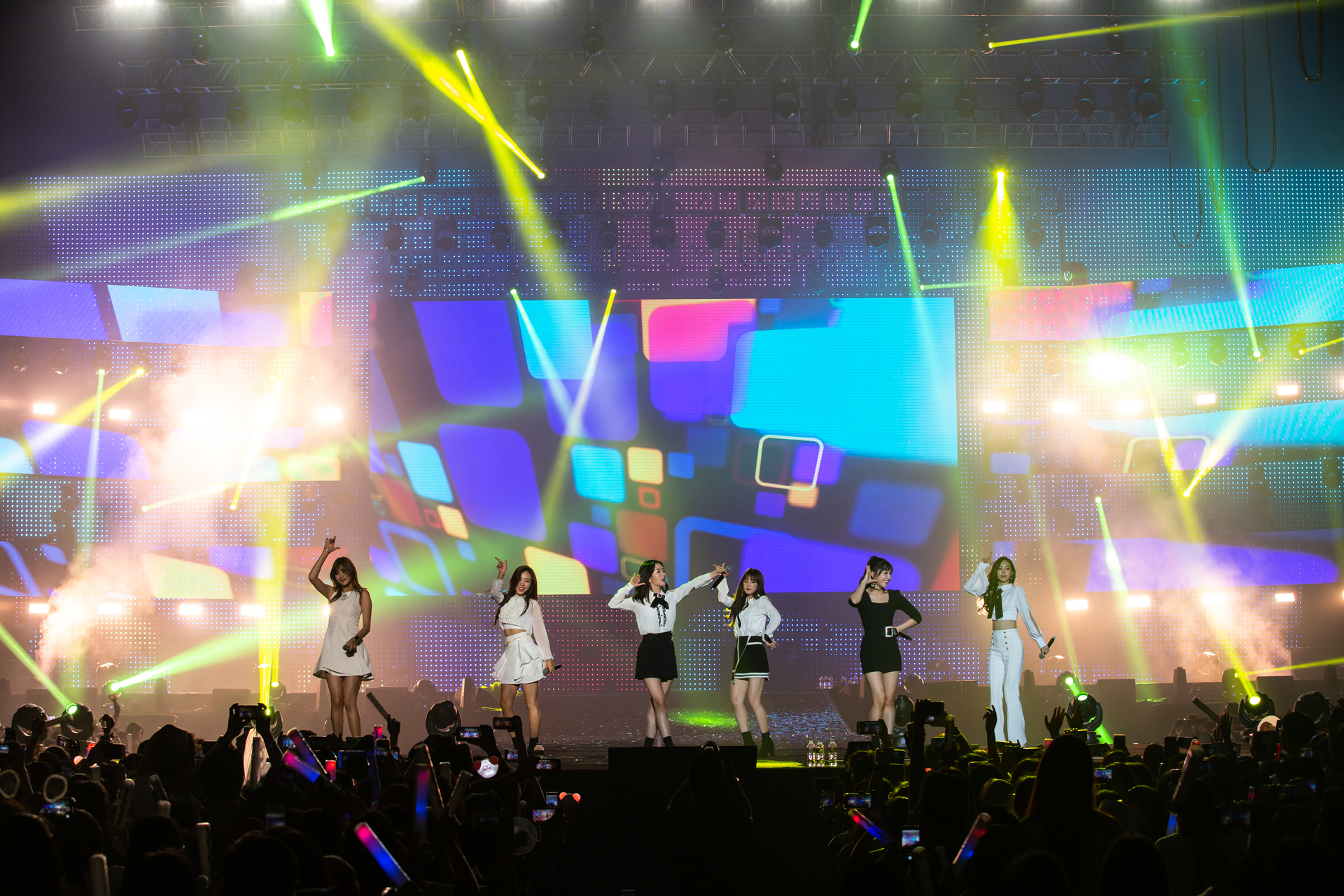 One of the most anticipated acts of HPF 2018 Day 1, Apink lived up to the cheers welcoming it to Singapore once again. Starting with 'I'm So Sick', the six-member girl group showed that they could easily engage with a bolder concept apart from its their trademark innocent and girlish image. It was then a trip down memory lane with the group’s iconic 'Mr. Chu' and 'No No No', which got everyone chanting along to the hooks. If anyone has doubt that Apink wouldn’t be able to overcome the 7-years jinx, its performance that night proved that it's still one of the best K-pop girl groups right now and that it's here to stay. 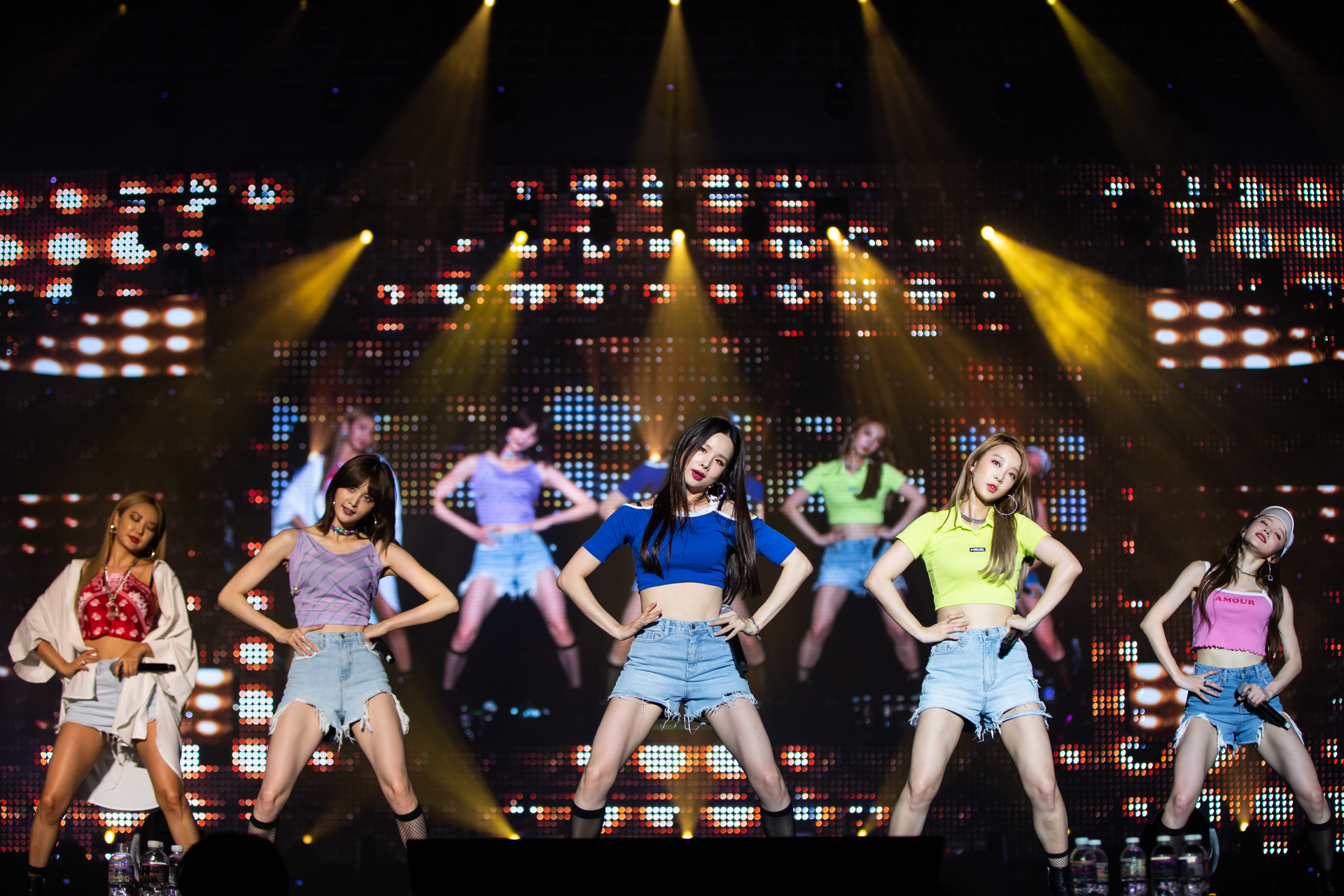 EXID was one of the most anticipated acts of the festival, given that this performance marked the return of leader and main vocalist Solji after her one-and-a-half-year-long hiatus following the diagnosis of a serious thyroid disease. The crowd cheered extra loudly for her as she powered through her group's six-song set. The group opened with 'DDD' to a roaring crowd, which was originally released without Solji last year. The girls heated up the stadium with their short shorts and risque dance moves, as they performed fan favourites 'L.I.E.', 'Ah Yeah' and of course, the wildly viral 'Up & Down'. Seeing the group walk the red carpet and perform at full strength was definitely a joy for many fans. To sweeten it all, the group announced that it's already working on a comeback album. 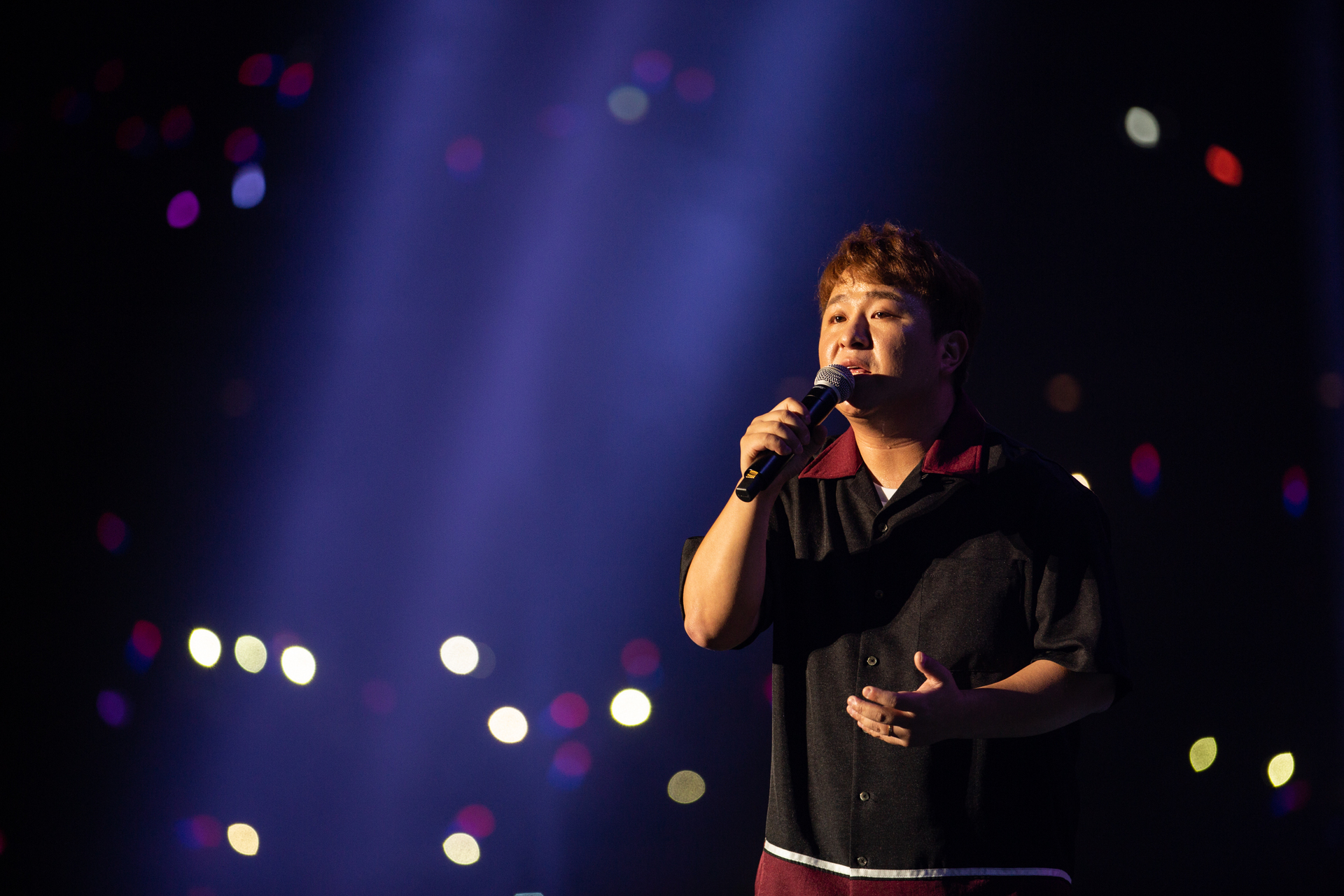 Huh Gak only sang four songs – one of which was a duet with labelmate Apink’s Eunji – but his set was probably one of the most memorable ones of HPF 2018 Day 1. His vocal prowess left the audience in awe, as it listened to the Superstar K2 winner as he gave his best performance with 'As Always'. If there’s one thing to take away from Huh Gak’s stage, it’s that numbers don’t determine anything. He may only be just one person, unlike idol groups who have many to share the stage with, but he has his strongest weapon – his voice, which is more than enough to put on a good show. 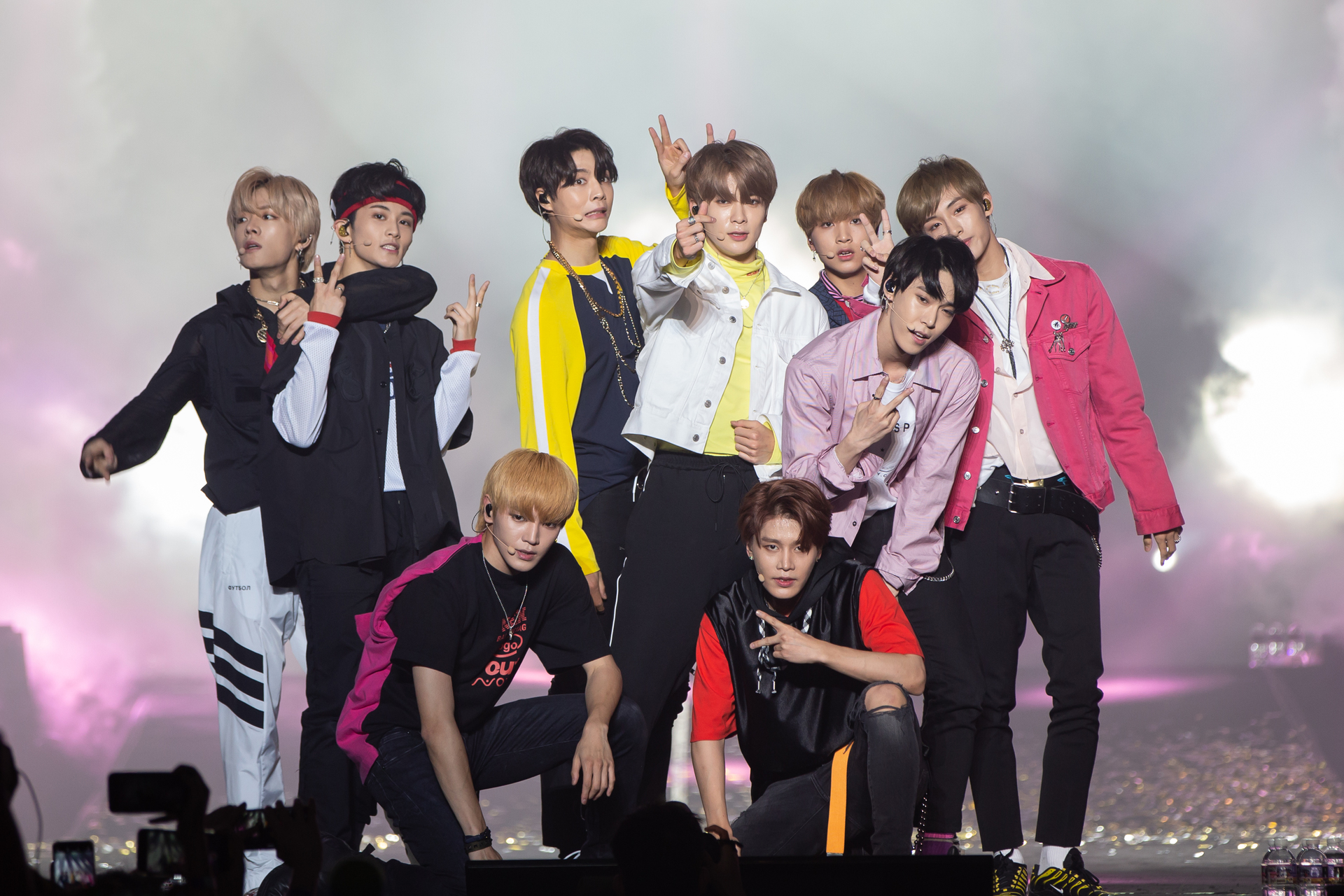 SM Entertainment - home of big names like Super Junior, TVXQ and Girl's Generation, did it again with its newest boy group - NCT. NCT127 is a sub-unit of the still-expanding group and its presence in Singapore has been highly anticipated. Most of the members have been on the fans' radar since their pre-debut days and fans have been rooting for them ever since. Their performance on the third day of Hallyu Pop Fest was just mind-blowing. While performing hits such as 'Limitless' and 'Cherry Bomb', they busted their surreally in-sync moves. In addition, their three English-speaking members made it easier for them to communicate with the fans. 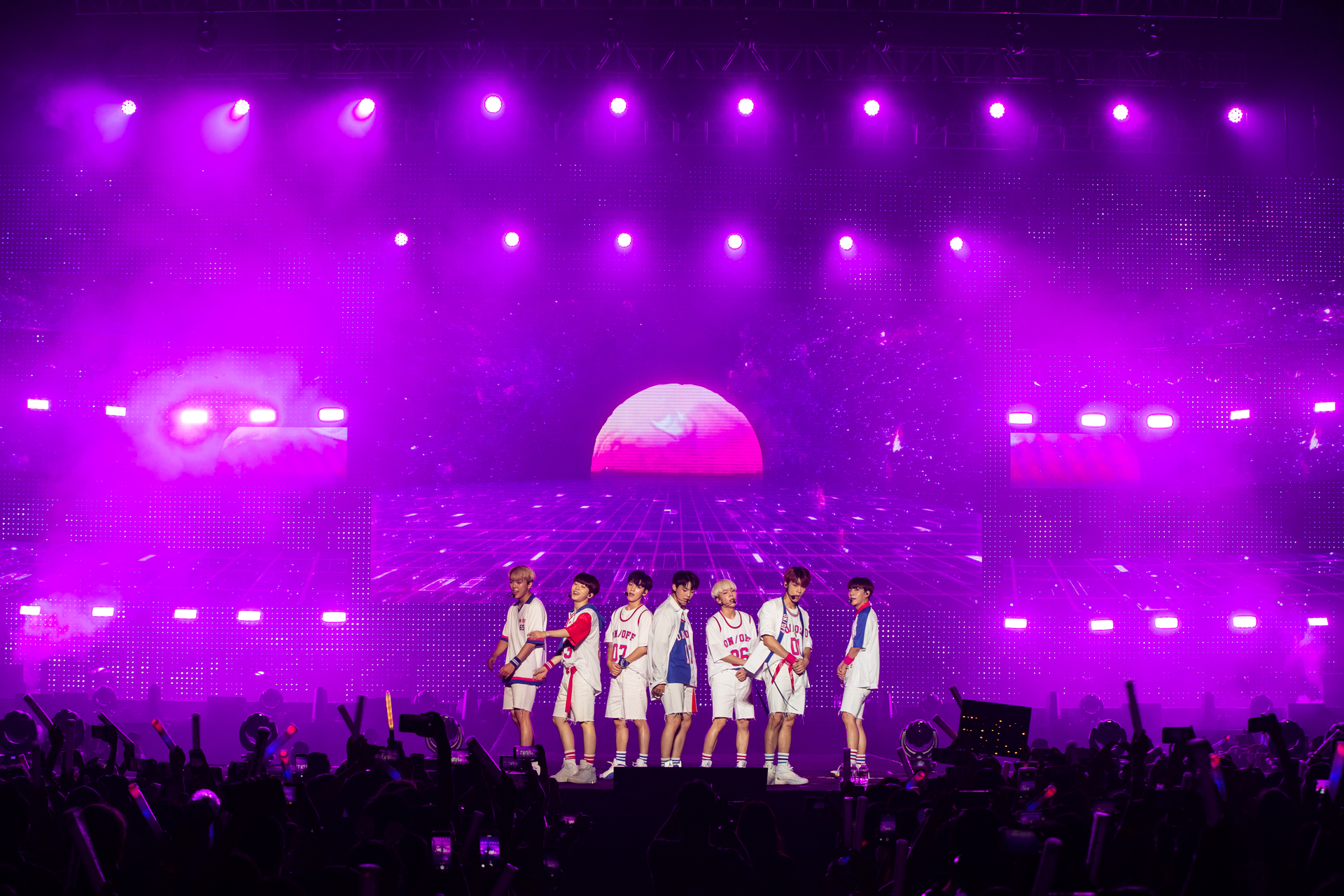 So many groups debuted last year that you probably missed some on your radar: for us, ONF was one of them. Seeing how comfortable they were on stage, we could barely tell that these boys are rookies. What gave it away, though, were their excitable banter, humility and hints of self-consciousness. Despite that, ONF really had fun on stage and won the hearts of many, especially when one of the members, MK, became the designated water boy, telling the members to drink up after each song. They are extremely underrated and we hope they get the love that they deserve. 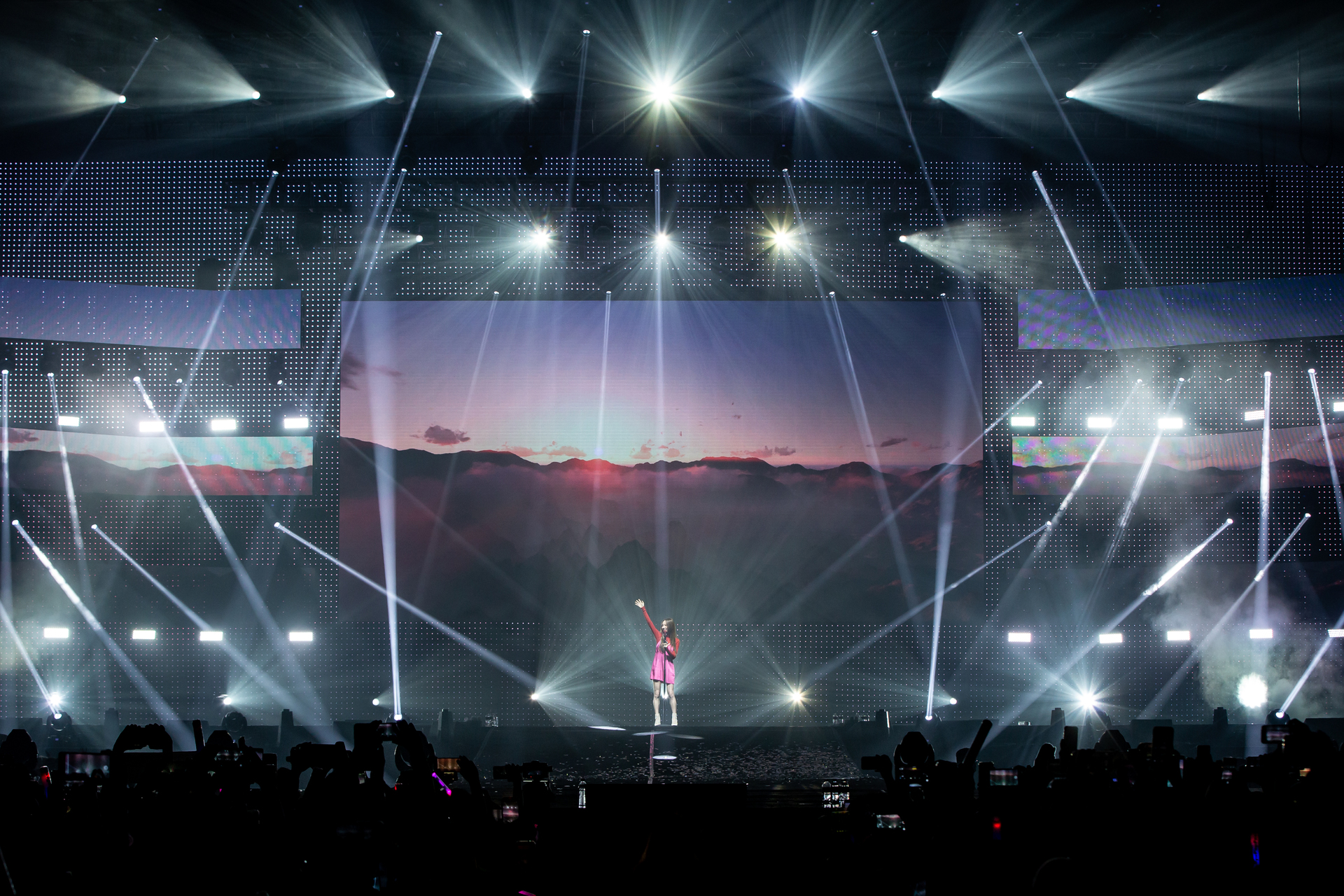 As the most senior performer of the whole festival, leader and main vocalist of Girls Generation, Taeyeon, definitely lived up to expectations as the last performance. Despite not walking the red carpet, the 29-year-old K-pop veteran was lively as she interacted with the audience, even coyly sharing that she recently got sparkly hair extensions just for her trip to Singapore. Opening with her first single 'I', the singer showcased her legendarily powerful vocals to the delight of fans. As pink light sticks — representing the Girls Generation fan club — lit up the stadium, the pint-sized singer took the audience on a trip with songs from her three solo albums. On a bed of soft rock and R&B sounds that are a departure from her bubblegum pop past, Taeyeon’s vocals soared through 'Feel So Fine' and 'Rain'. She then closed the show on a high note with the funky bop 'Something New' from her latest album. 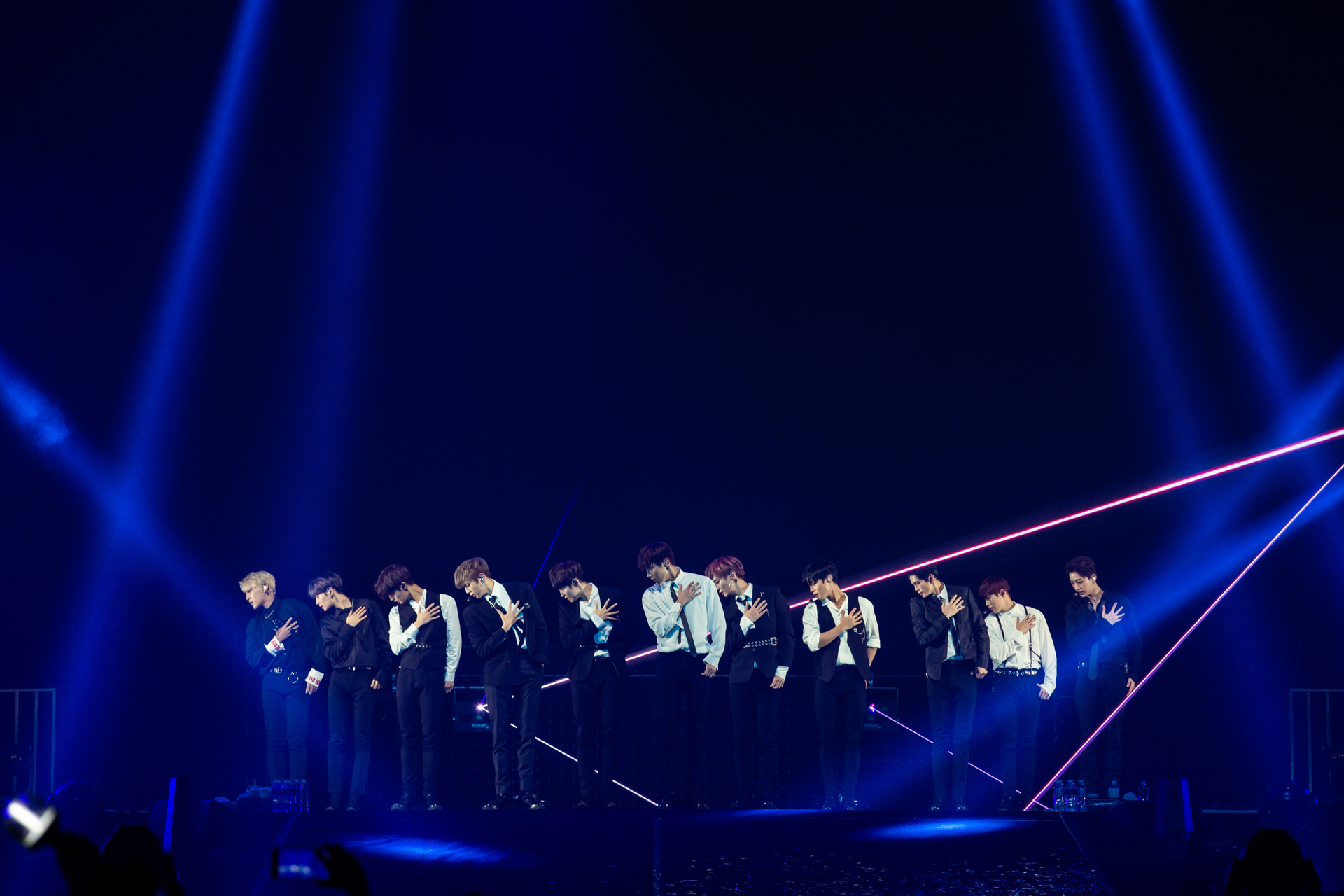 The screams for Wanna One were deafening, to say the least, as the boys took the stage for the first two days of HPF 2018. It almost felt like it was their solo concert in Singapore, which happened earlier this July, all over again. However, their insane popularity isn’t all for nothing, of course. They have the whole package – good vocal and rap skills, synchronized choreography, and not to forget, dashing looks – and they showcased it all. It was also a nice surprise to see them perform ‘Never’ and ‘Always’ on Day 1 as they tipped their hats to Produce 101 where their journey officially began.

This was the only bad thing about the whole festival. The unpredictable weather was one thing but the sadder fact was when AOA, Taeyeon and BTOB failed to show up for their red carpet. We understand that their schedules are tight but it would have been nice if we had a heads-up, especially the fans who waited in the hot sun only for their faves to not show up. On Day 3's red carpet, NCT127 showed up fashionably late but they didn't take any questions, which left the fans quite upset. 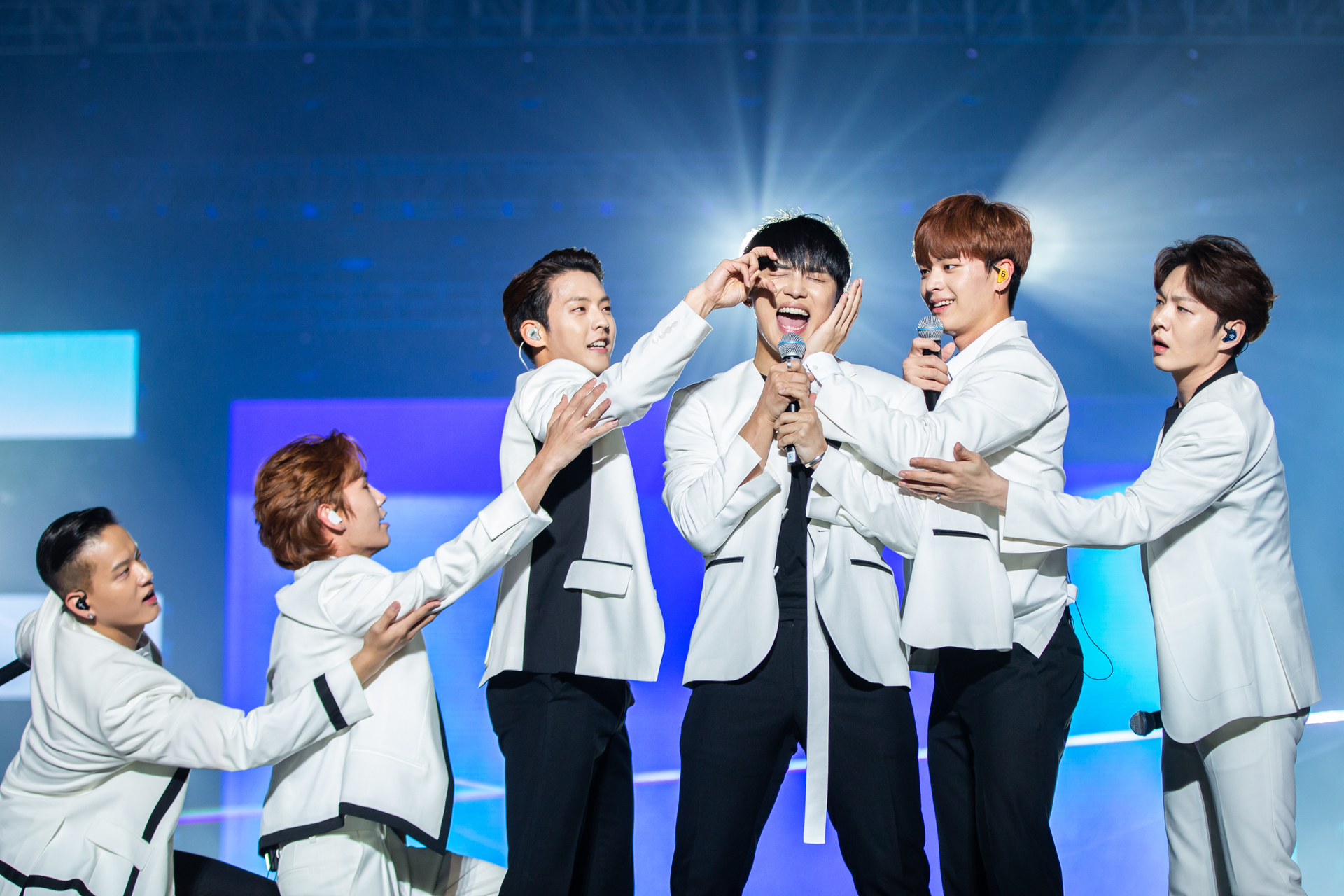 Day 3 of Hallyu Pop Fest saw BTOB as a six-member group instead of the usual seven - leader and eldest member Eunkwang was away for military conscription. Despite being short-handed (Eunkwang left some very big shoes to fill!), the CUBE Entertainment boy group did their very best for their Melodys (that's what they call their fans). It was exceptionally touching when Sungjae asked the audience after a ballad, "Do you guys miss Eunkwang?". The fans screamed yes. Sungjae said that he missed Eunkwang too and it made us feel all sorts of sad. Thankfully, the mood lightened up when BTOB appealed to the audience to say "Fighting Eunkwang!" together before kicking off their next song. 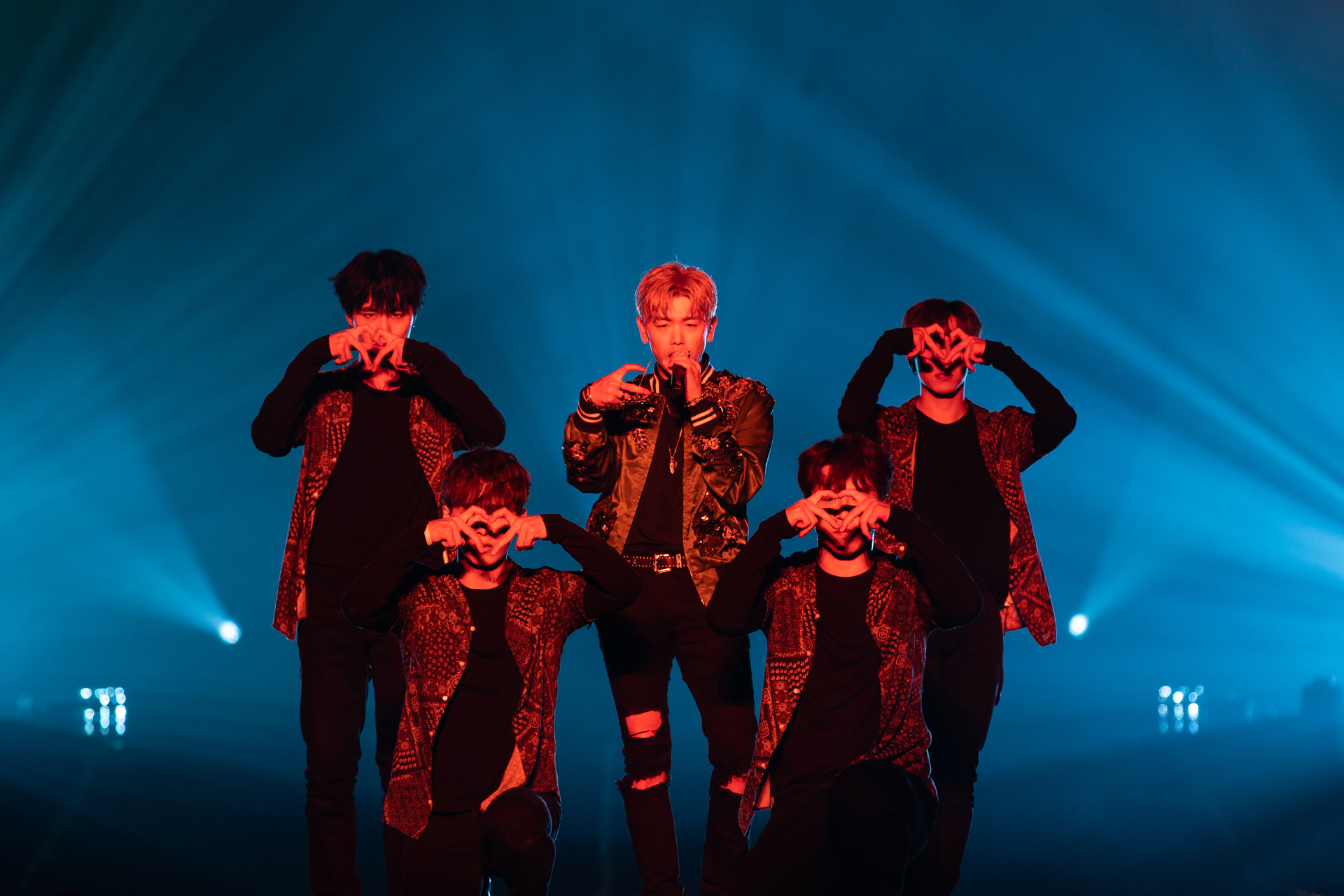 A personal pick for the MVP of HPF 2018. Undoubtedly the busiest man of the festival, Eric Nam hosted and performed on all three days. It’s worthy to note that he had a different setlist for each night, delivering the most dynamic performance overall. Because we see so much of the Korean American in the hosting scene, many tend to forget that he’s also an exceptional singer. On the HPF stage, we were lucky enough to see the best of both worlds. From emceeing to singing, his energy was infectious and kept the crowd hyped throughout the three-hour concert. 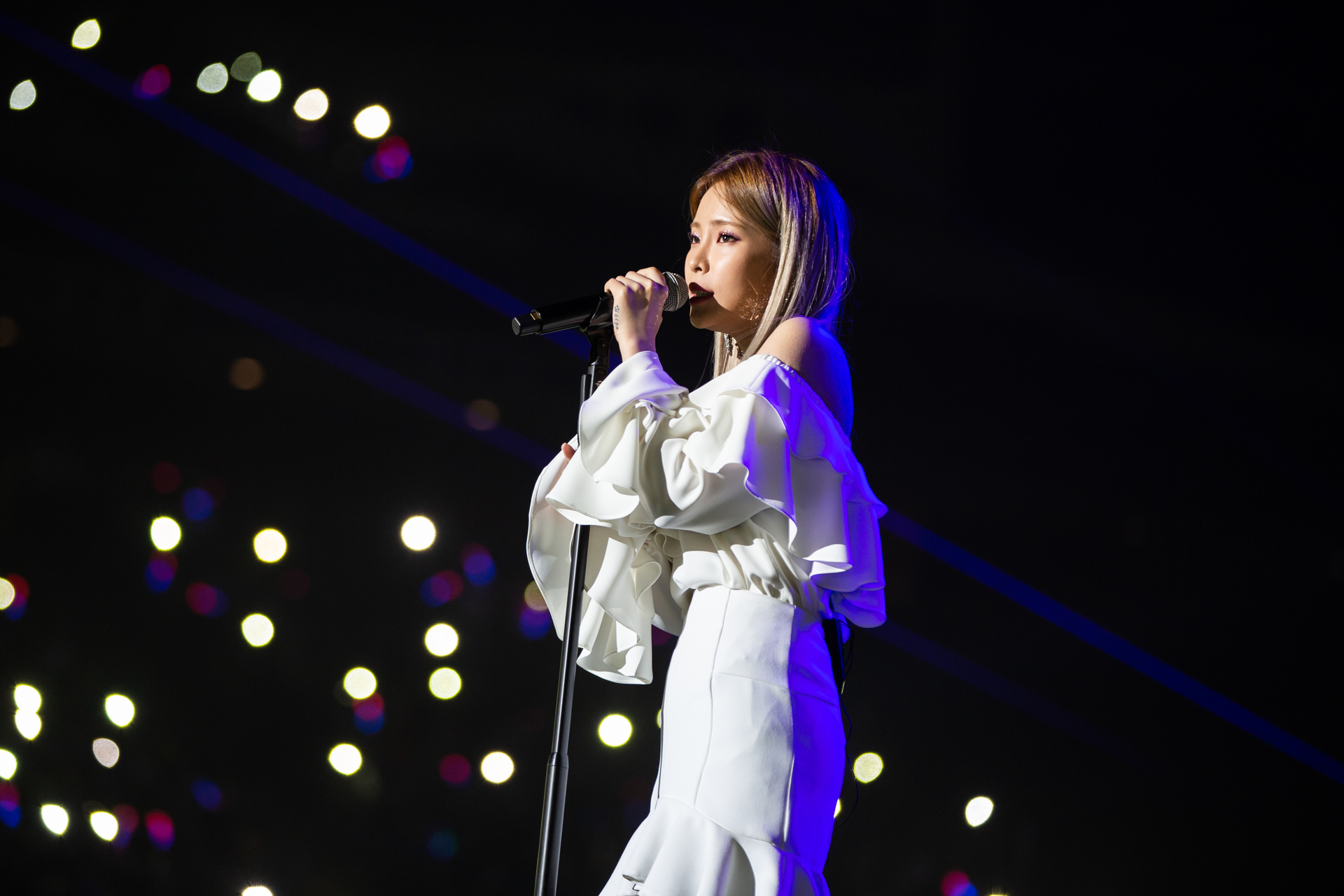 Newcomer Heize may be known for more mellow songs like 'You, Clouds, Rain' and 'And July' — her duet with Dean — but the 27-year-old solo artist was comfortable and at ease interacting with the audience and showcased a stage presence that rivaled the bigger groups. She introduced the crowd to her new jazzy single 'Jenga', and then requested for the audience to turn off their light sticks and instead turn on the flashlights on their cellphones. And in a mesmerizing sea of white lights, she gently crooned along to the mellow ballad 'Star'. We’d love to see her back in Singapore for a more intimate gig with a longer set. Fingers crossed! 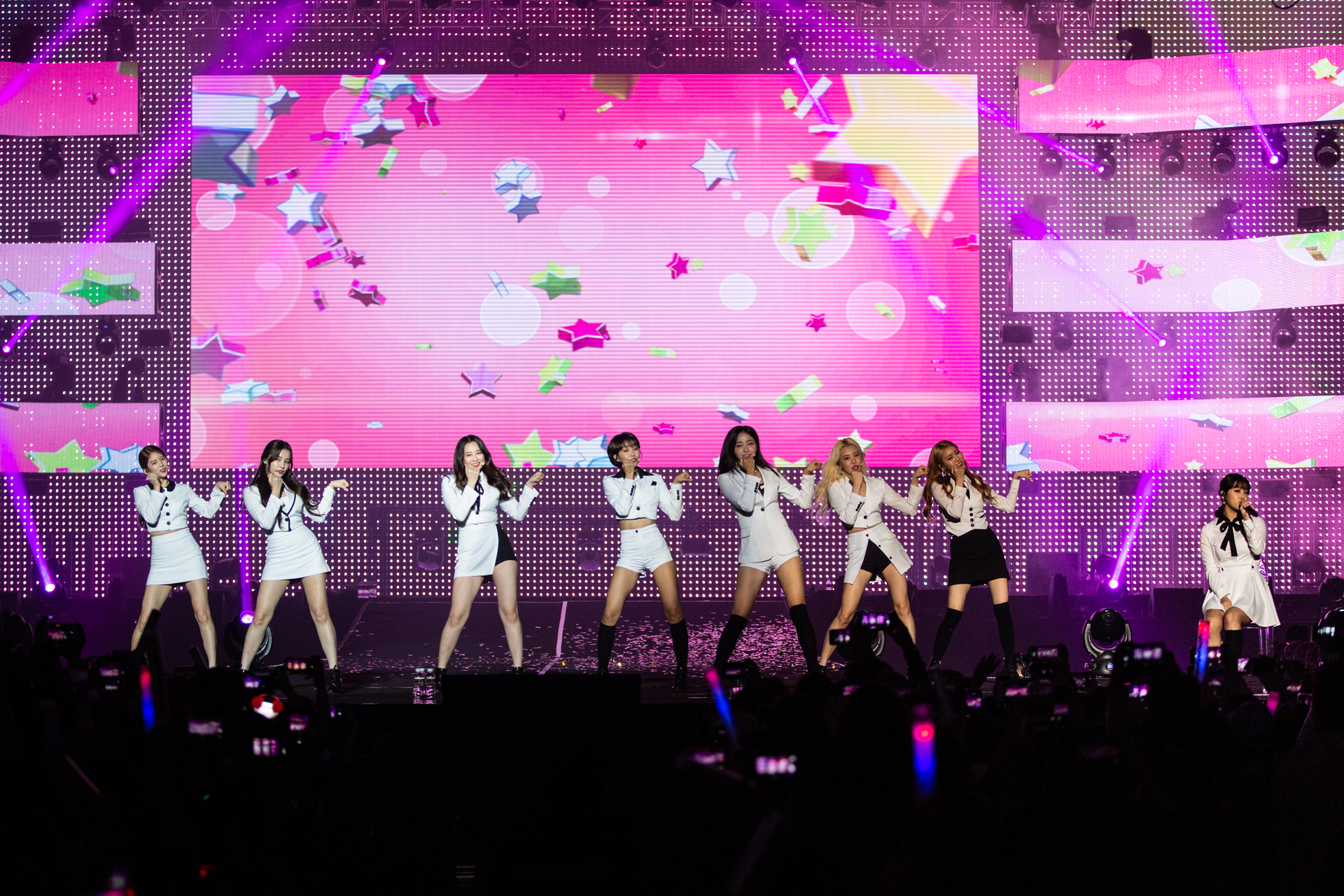 With Nayun on hiatus and Ahin in a leg cast, MOMOLAND did just fine for both Day 1 (evening concert) and Day 2 (afternoon showcase) of Hallyu Pop Fest 2018. It delivered an electrifying set of seven songs, including 'Bboom Bboom'. Even if you haven’t heard of the nine-member girl group, you would have probably heard the song in passing on the streets this year. It got everyone – it didn’t matter if they were standing or sitting – moving their bodies to the familiar tune. On a side note, the girls surprised many with how fluent they are in English. They had no trouble communicating with the fans directly, especially when the translator did a less-than-satisfactory job of relating their words across to the audience. 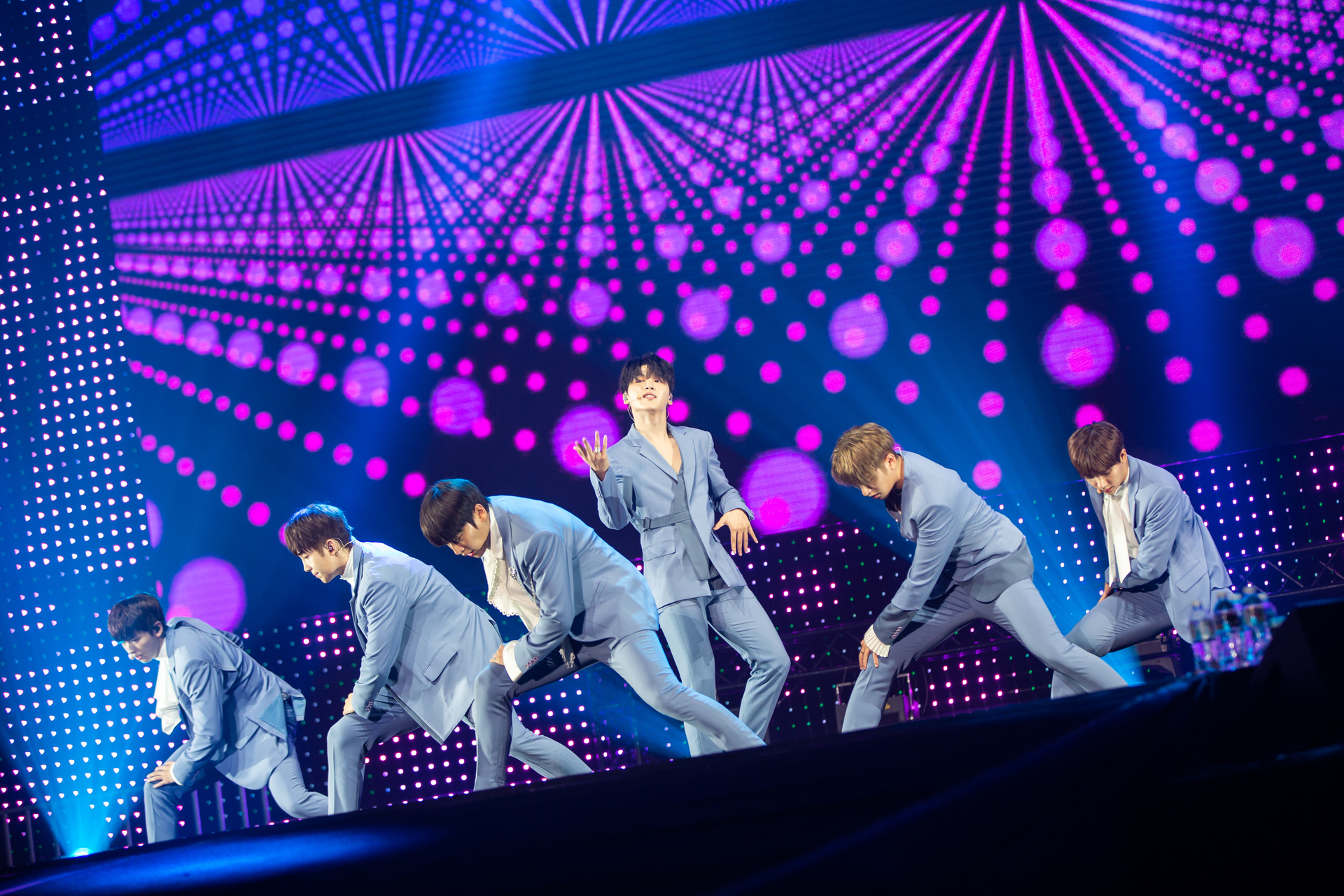 SNUPER really brought their 'A' game to Day 3 of Hallyu Pop Fest. From the outfits to the ridiculously generous fan-service, it's only safe to say that these boys definitely gained a whole of fans after this! During 'Oh My Venus', they had the camera zoom into a member of the audience so it would be as though they were serenading them. Fangirls (and boys) were giggling shyly and quickly hid behind their hands or merchandise whenever they came on screen. At one point in time, SNUPER went down to the audience and interacted with those in the moshpit. Though the group only performed four songs, its stage presence was captivating. It sang its hit song, 'Platonic Love', an '80s-inspired bop and that got the whole stadium dancing and vibing along with it. 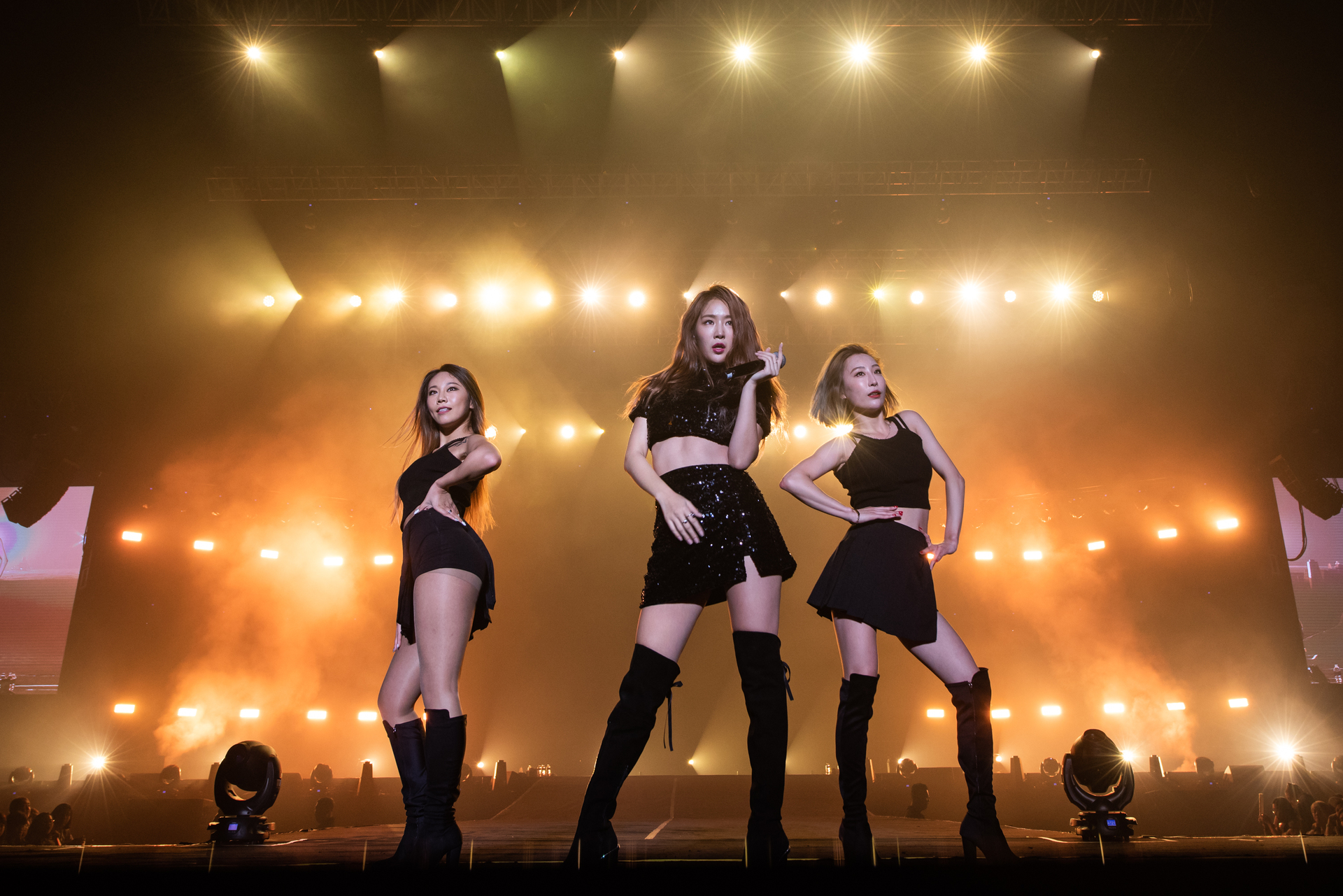 Very few have replicated Soyou’s extremely successful transition from bubblegum K-pop idol to mellow solo artist. Opening with her memorable duet 'Some' alongside labelmate Jeong Sewoon, the crowd was quick to warm up to her and sing along. And when the opening chords of 'I Miss You' echoed in the stadium, the audience responded with a roar of recognition to the song, which is from the official soundtrack of popular Korean drama Goblin. Although her appearances on shows like Produce 48 have propelled her popularity as a solo artist, Soyou took fans on a trip back to the past. Performing popular Sistar songs 'I Swear', 'Touch My Body' and even 'Ma Boy' — originally a duet by two other members of the group — her high-energy set got fans grooving in their seats. 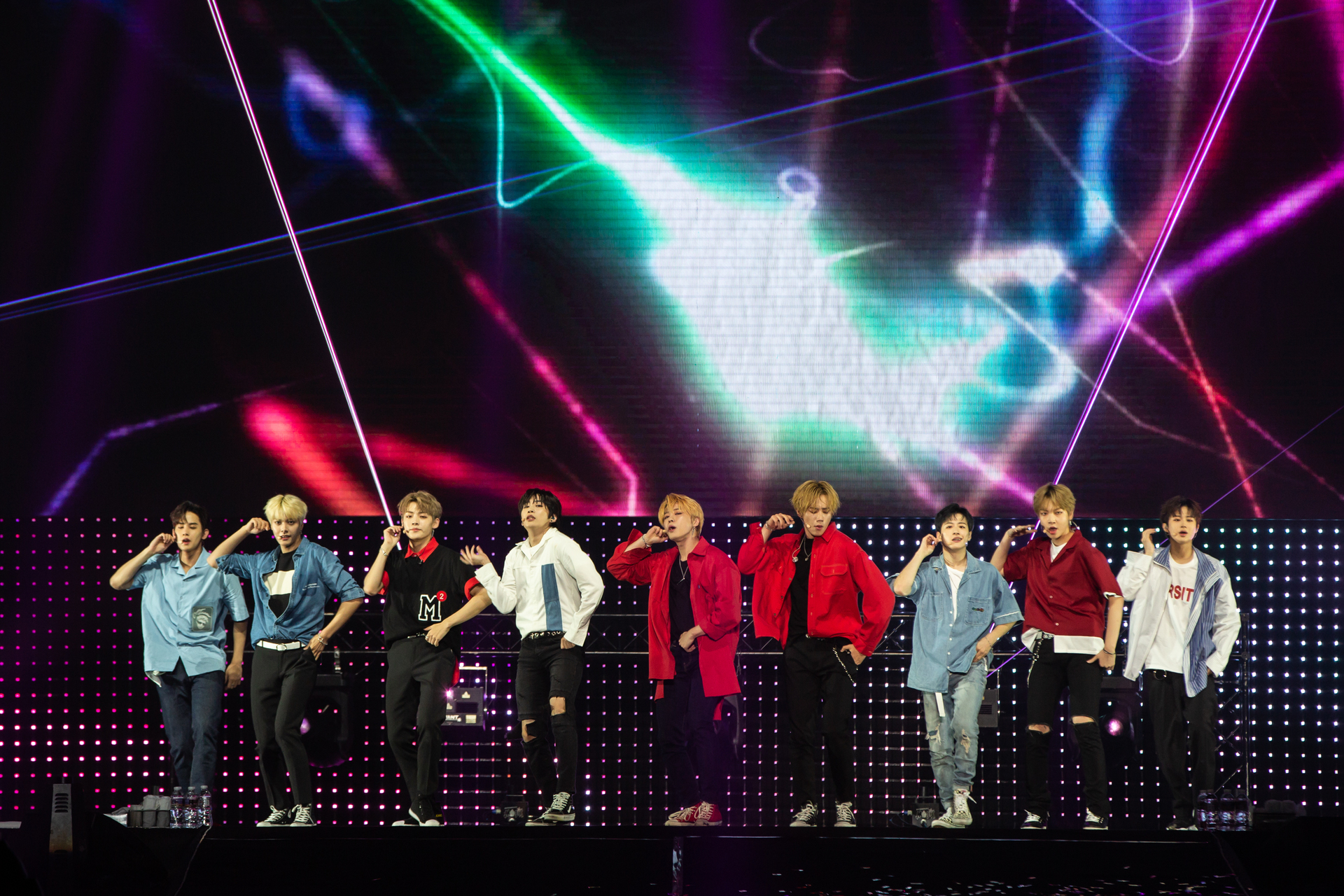 We can't afford to not include UNB––which performed a whopping eight songs (we know, right?!)––on this list. Born out of The Unit, yet another popular Korean survival show, the boys of UNB put up a spectacular performance, smoothly transitioning from dance acts to singing fan favourites like 'Feeling' and 'Black Heart'. The group definitely won the hearts of many that night with their charming good looks and complex dance moves and vocals. It didn't sing every song live (due to all the dancing!) but when they did, they certainly impressed us with their high notes and adlibs.

Props to the organizers of Singapore's inaugural K-pop music festival, Hallyu Pop Fest - it's not easy to manage 21 K-pop acts and pull off a 3-day long K-pop festival! Though there were issues, they were quickly resolved along the way. Overall, the festival was not bad for a first-ever edition. The line-up was diverse, security was strict but necessary and the shows didn't really over-run. The only downside was the Red Carpet experience which we are sure, will be improved in due time. Hallyu Pop Fest 2019 is already in discussion and we look forward to having an even better time next year!

Special thanks to H. A. H entertainment for the invite.