With the annual We The Fest weekend over, post-festival depression has set in at the Bandwagon office. With a stellar line-up boasting the magnificent booking skills of Ismaya Live, We The Fest saw the likes of Lorde, Miguel, SZA, alt-J, Nick Murphy and more perform over three glorious days. We look back on the weekend and reflect on the good, the bad and the notable of the Jakarta festival. 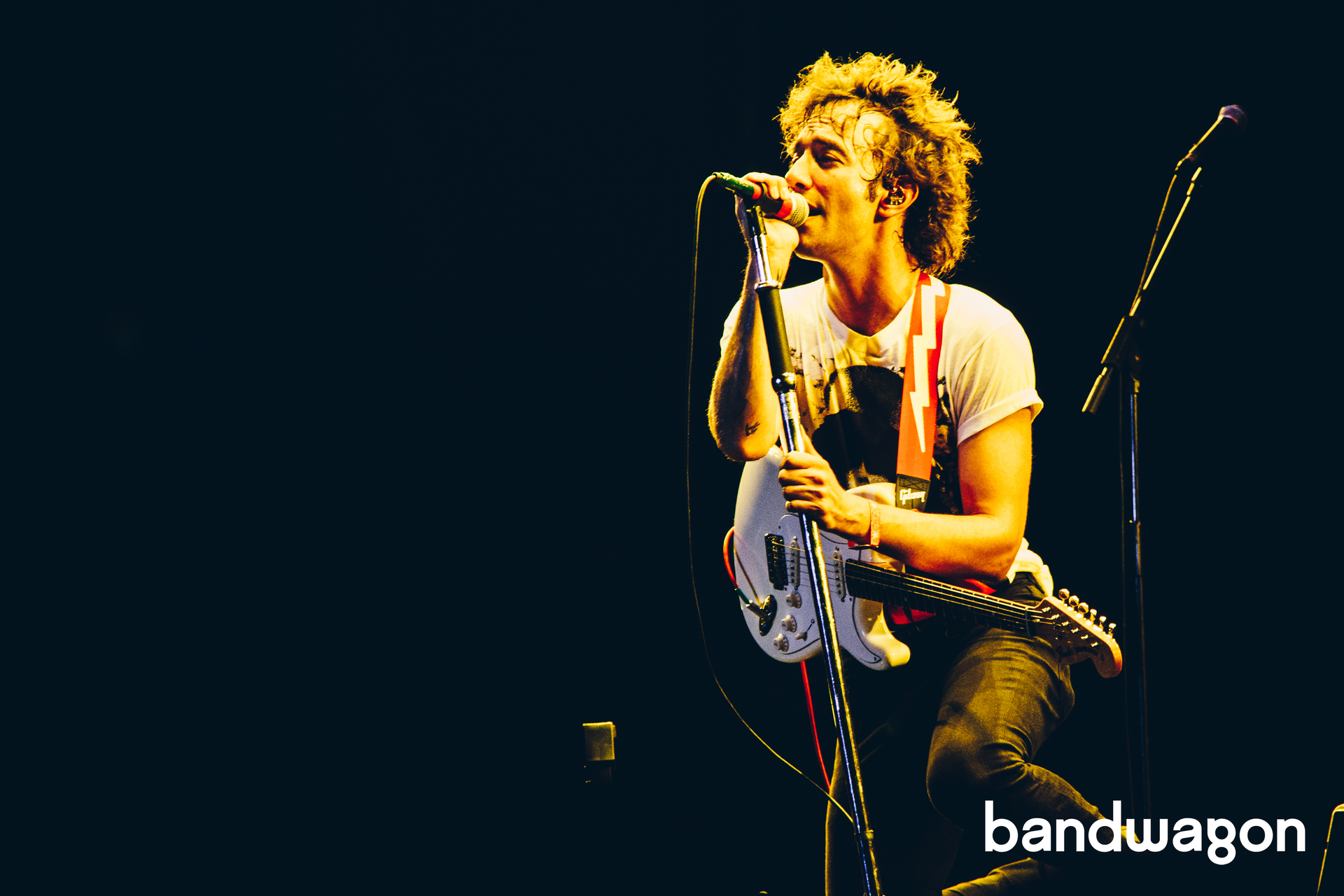 Albert Hammond, Jr., best known for his work with The Strokes, proved he can stand on his own with probably the most dynamic set of WTF Day 1. For his solo effort, AHJ plays less guitar and sings his way through his solid discography: from his 2008 debut Yours To Keep down to his latest release, 2018’s Francis Trouble (there was no need for a Strokes cover, although some fans in the crowd were probably hoping for at least one). Backed by his touring band, AHJ spent most of his time running across the stage, jumping up and down, and taking security by surprise by making his way through the crowd, jumping into the VIB pit, and running towards the GA barrier to get closer to his fans. 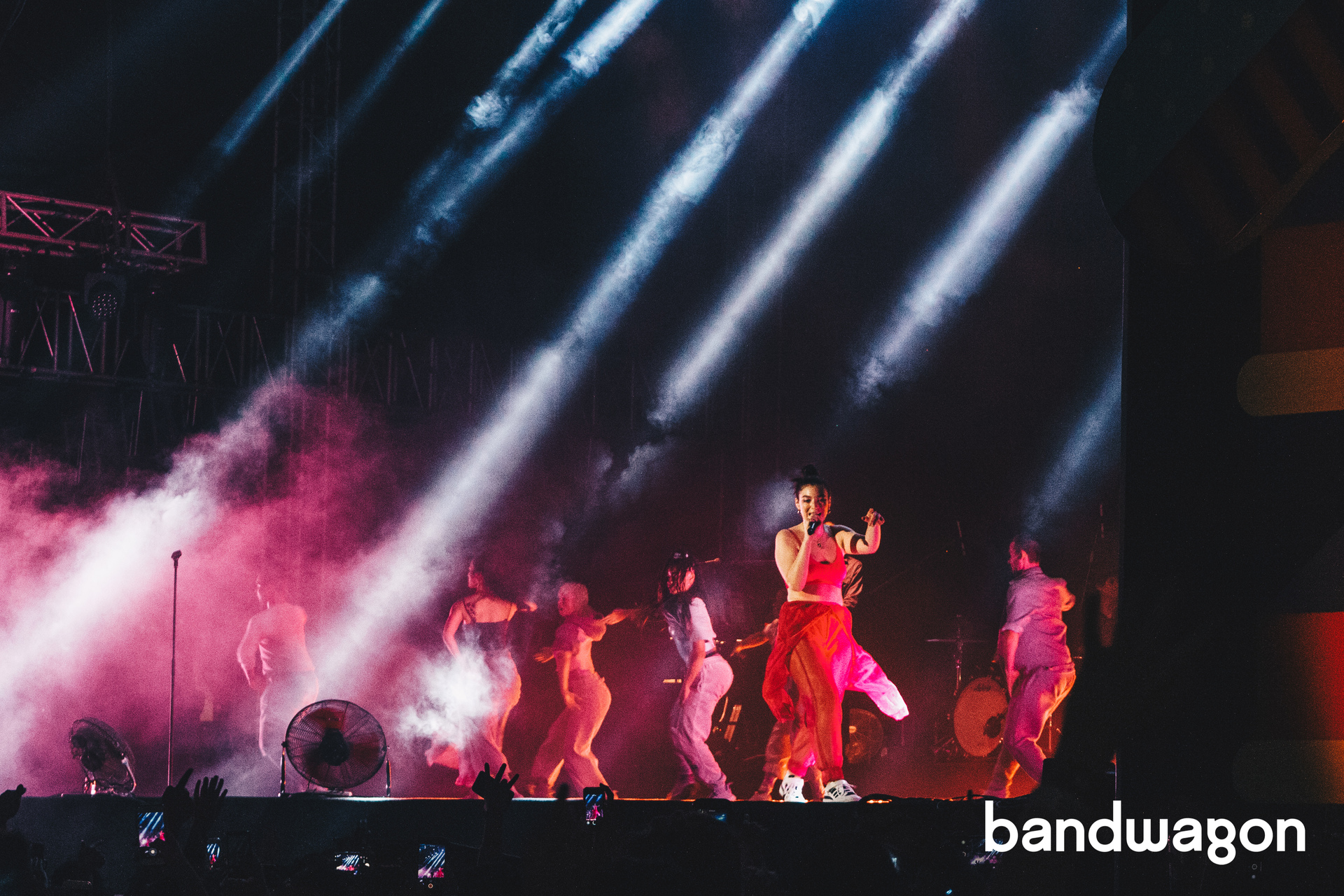 One of the most exciting acts on the lineup, Lorde absolutely shone as the main stage draw of WTF 2. With her back-up dancers, impeccable vocals and simple yet striking dance routines, Ella Yelich-O’Connor put on a performance that was not only visually strong but also emotionally moving. Her back-to-basics rendition of ‘Liability’ was enough to make one shed a tear, while the triumphant closer ‘Green Light’ got everyone – and we mean everyone – jumping up and down and yelling joyously at the same time. Yelich-O’Connor has had an incredible career so far at the tender age of 21, but seeing her live at WTF was more than enough to convince us that there are still great things in her future. 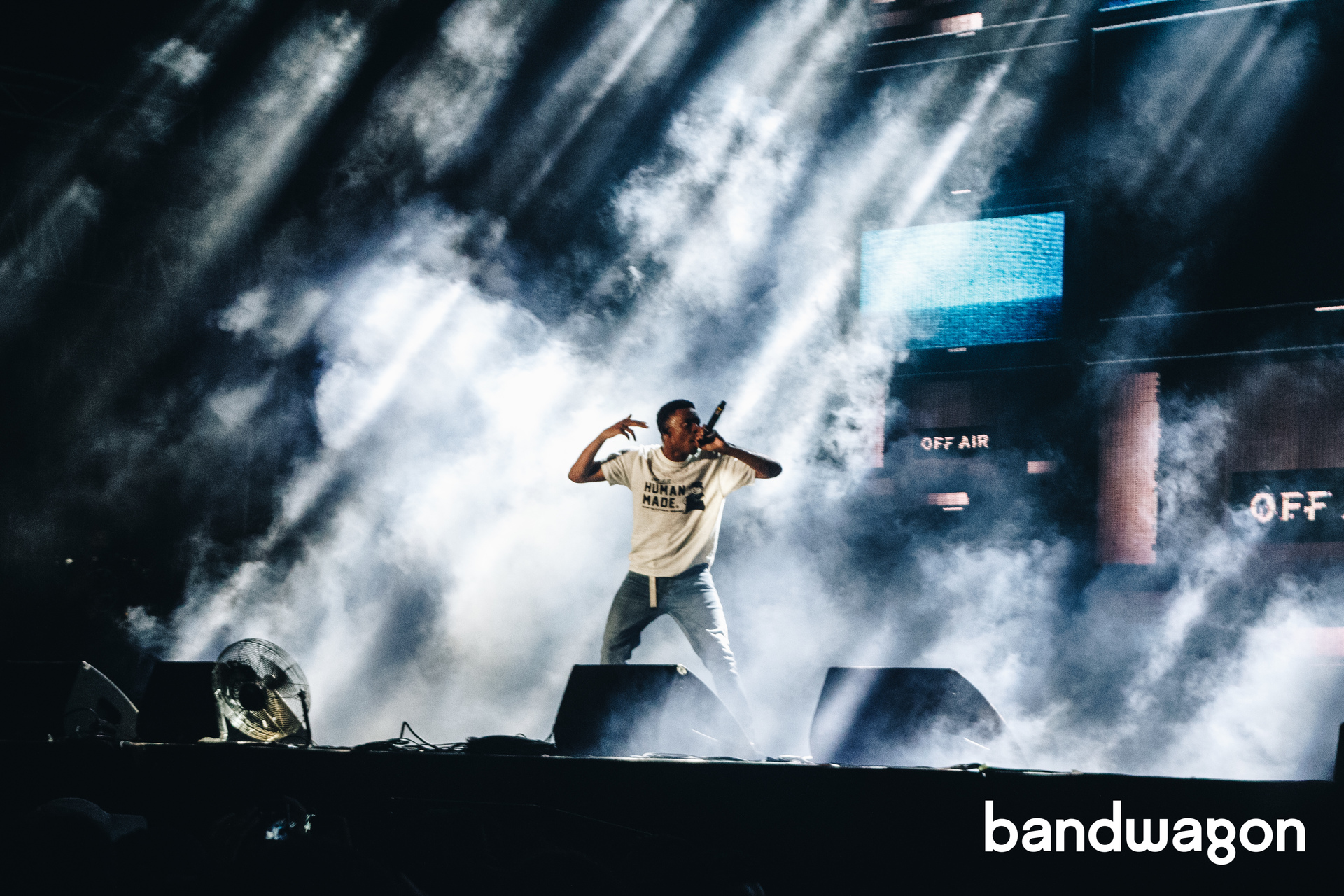 Vince Staples made his debut in Indonesia this past weekend when he performed on WTF day 3. While Vince's interaction with the crowd was a little rote, he still put on the performance of a lifetime, making his debut in Jakarta one to remember. Sadly, he brought about one of the smaller main stage crowds amongst the headliners for day 3, with Miguel and SZA, who performed after him, drawing in larger crowds. If Vince’s performance at We The Fest could be summed up in one word, it’d be ‘underrated’. The Californian rapper ran through 12 of his best songs, including hits ‘Big Fish’, ‘Rain Come Down’ and ‘Yeah Right’, the last of which closed the set. When all was said and done, Vince put on one of the most eclectic sets of the weekend, and it’s a damn shame he didn’t get the crowd he rightfully deserved. 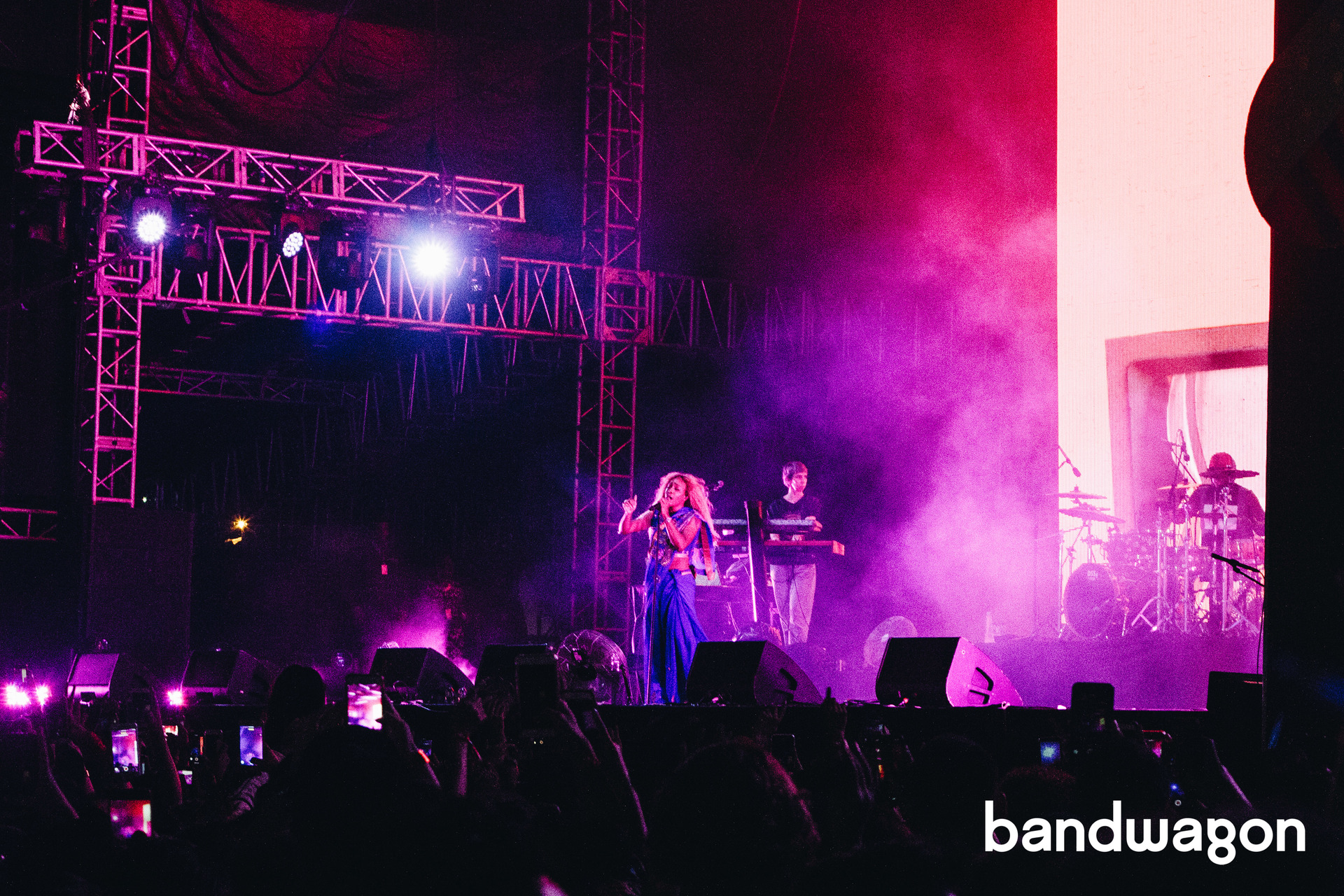 The very last main stage act of We The Fest, SZA had a lot to live up to – and early headlines about the worrying possibility that the rising R&B star known as Solana Rowe had damaged her vocal cords certainly didn’t help. But as it turns out, SZA, with her warm, generous personality, was the best festival closer we could’ve hoped for. She ran through most of Ctrl, pausing between songs to talk to the ardent crowd, telling them she wanted to wear a hijab (SZA was raised Muslim) but that her mother, who was watching sidestage, advised her against it. The way SZA sings live, with especial effort put into her vocal runs, is taxing – watching her, it wasn’t difficult to understand how she could have developed problems with her vocal cords. But to the hundreds of teenage girls and women going delirious singing along to songs like ‘Love Galore’ and ‘The Weekend’, that didn’t matter so much. 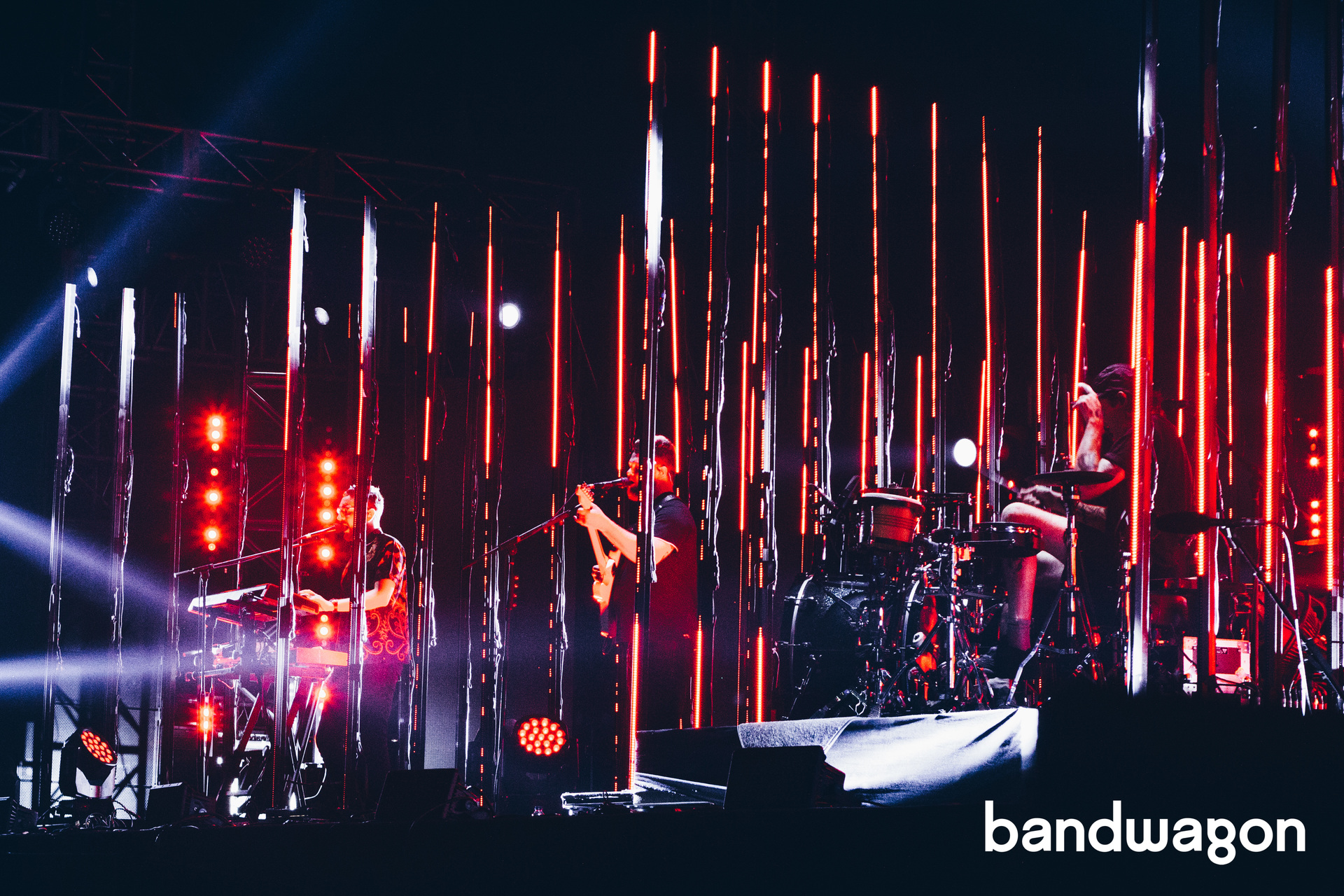 Shoutout to We The Fest – it’s not easy to book a top-notch music festival. But it must be said that comparing all three days, days 2 & 3 undoubtedly attracted bigger crowds.  After the rock n’ roll excitement that James Bay brought to the stage on day 1, we felt the remaining acts could have contributed more energy in their performances. While there was incredible stage production and dazzling lights for Nick Murphy and alt-J, somehow they missed the mark even with renditions of their music so perfect and true to the album recordings.

Shirtless frontman Jesse Rutherford of The Neighbourhood rambling into his microphone in a somewhat melodic fashion struck us as less than edgy, while the music provided by the rest of the band didn’t do much to lift spirits, either. Compared to the intensity and excitement of Vince Staples, Miguel and SZA, who came after, The Neighbourhood's set confirmed this. This seemed to be fine though, as the crowd enjoyed every moment of it. 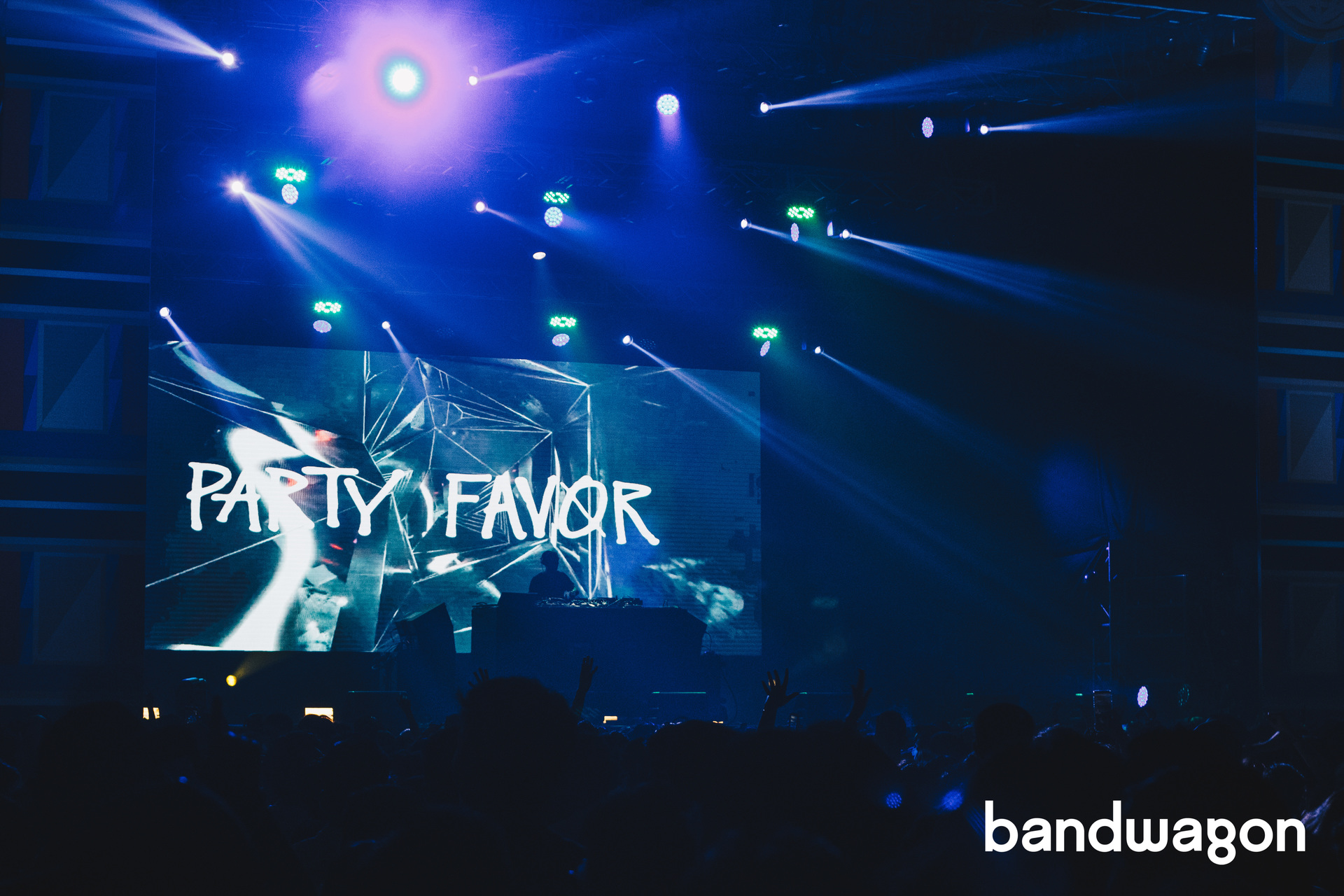 The biggest concern for festival-goers after the line-ups are announced are set timings and clashes: no one wants their favourite artists performing at the same time on different stages. And while you could argue that We The Fest's ability to book top-tier acts is nothing but a blessing, it doesn’t help that fans have to decide which of their favourite artists they want to catch, or running from stage to stage to catch a bit of both. The biggest set clashes this past weekend came from Lorde and Majid Jordan, who started their set 30 minutes before Lorde. While you might think “Oh, catching 30 minutes of Majid Jordan isn’t that bad”, you’ve got to factor in that fans at the main stage were camping out for Lorde all day, so the only chance to get a good spot would be to leave Majid Jordan’s set in hopes to squeeze your way through the crowd. Other notable clashes came from Party Favor and ODESZA, SG Lewis and Vince Staples, and Miguel and Petit Biscuit. Let’s hope next year’s festival solves this happy problem as best as possible.

Another thing that we think could've been done better at WTF this year was the placement of the stages – well, just one in particular: Another Stage. The Another Stage was the all-Indonesian stage, with it's entire line-up of performers being Indonesian acts. We love that stage, we really do, but the location of the stage could have been better. It was situated so close to the Main Stage that the sounds from from both stages often bled into each other's space. Lorde even commented on it during her set, asking fans if they could do sing louder to drown out the sounds from the other stage. 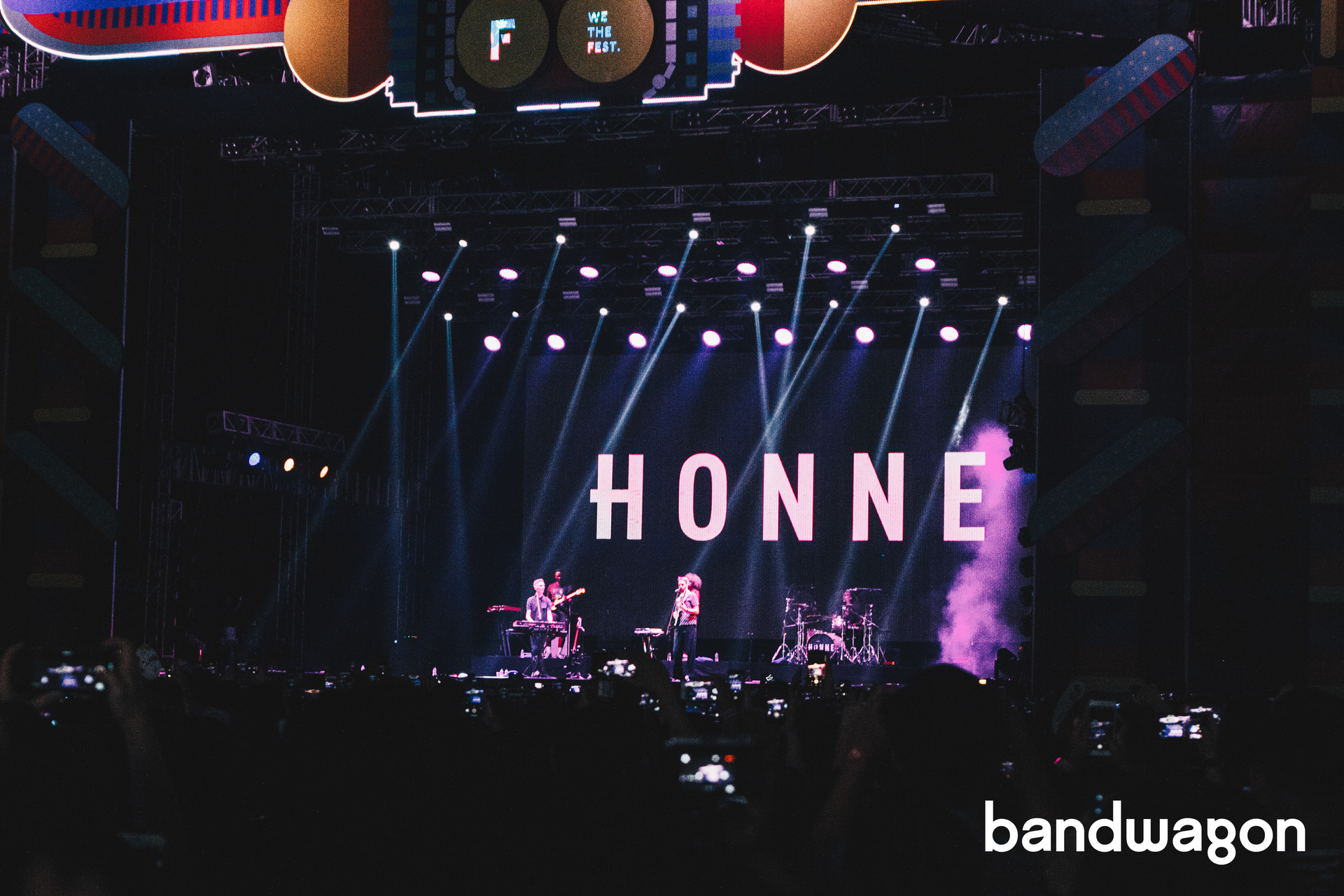 English electronic duo Honne drew in what was without question the largest crowd at We The Fest this past weekend, when they took to the main stage on Day 2 of We The Fest. We’re talking a packed main stage, with the crowd spilling over to the food village and miscellaneous pop-up stalls. With headlining acts like Lorde, SZA, Miguel, Vince Staples, ODESZA and alt-J, you’d think one of those would be drawing in the largest crowd, given how many of them were making their debuts this past weekend. Honne however, have performed in Jakarta twice in the past two years, confirming that the Indonesian crowd still loves them no matter how much of a familiar presence they've become.

Singaporean pop stars The Sam Willows made their debut in Jakarta this past weekend and drew in one of the largest crowds to the indoor stage, This Stage Is Bananas. While the band had a formidable crowd at the start of their set (more than their sold out solo show in Singapore), the crowd grew by the minute, and by the time the quartet ended their set, complete with confetti and the likes, they had packed out the indoor hall. The fans lapped up every minute of the performance, singing along and losing their minds when the band brought out Indonesian trio GAC for 'Save Myself'. Also, it was really nice to see Singaporeans in the crowd waving a flag high for their hometown heroes. 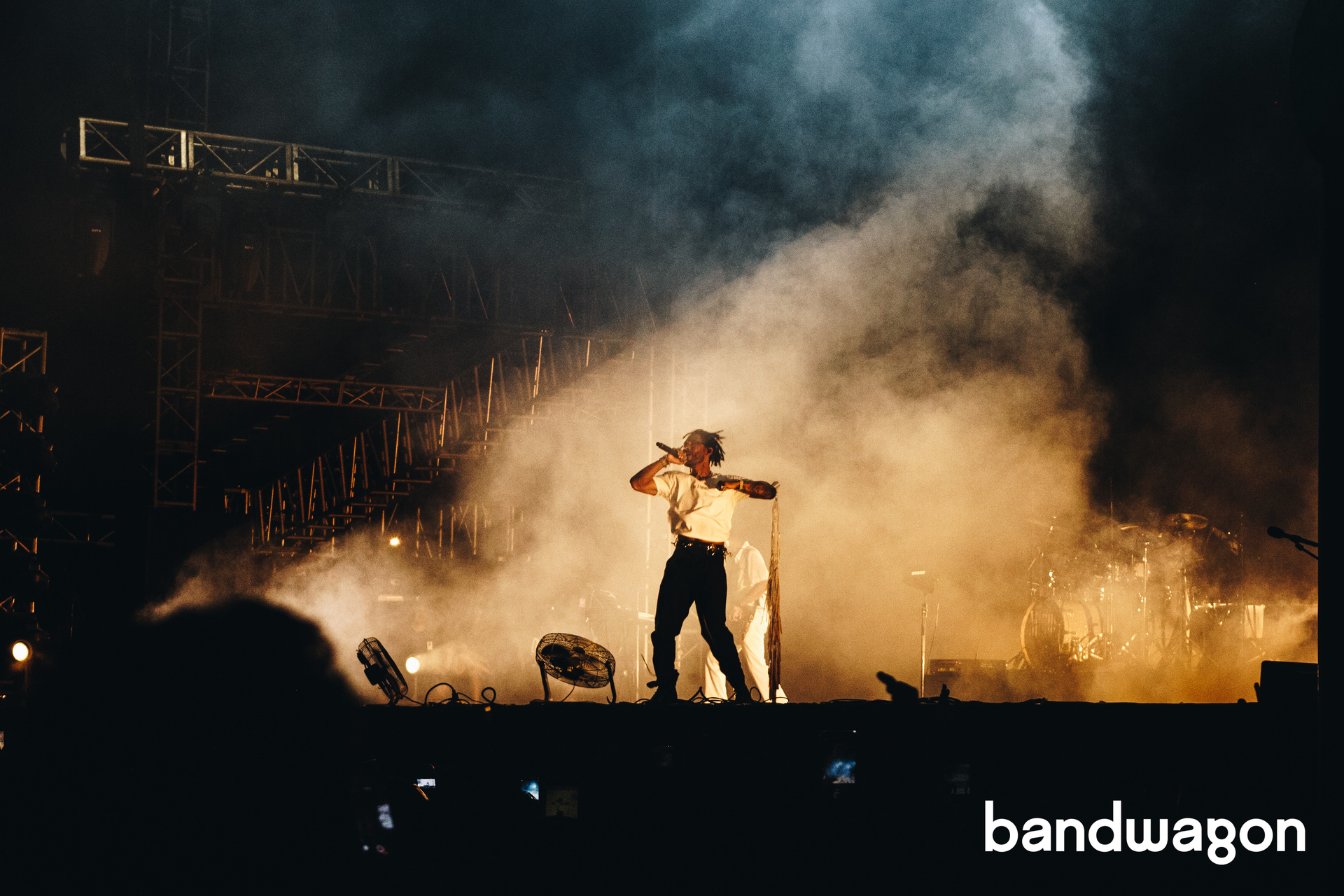 It must be said – Miguel is an incredible performer. From the note-perfect singing to the striding across the stage, making ample eye contact with the audience, to the more somber but no less heartfelt rendition of ‘Now’, Miguel Jontel Pimentel had WTF day 3 in the palm of his hand. It honestly would have been one of the top sets of the festival – if we hadn’t been watching with his denial of a sexual assault allegation boring a hole in the back of our brains. Knowing Miguel has strenuously denied groping a woman who was his fan at the time made his flirtations with the crowd more icky than heady. The allegation levelled against Miguel hasn’t managed to stain his reputation (and the music industry has seemed far more impervious to the impacts of #MeToo revelations), and WTF went, all in all, gaga over him. But not us. 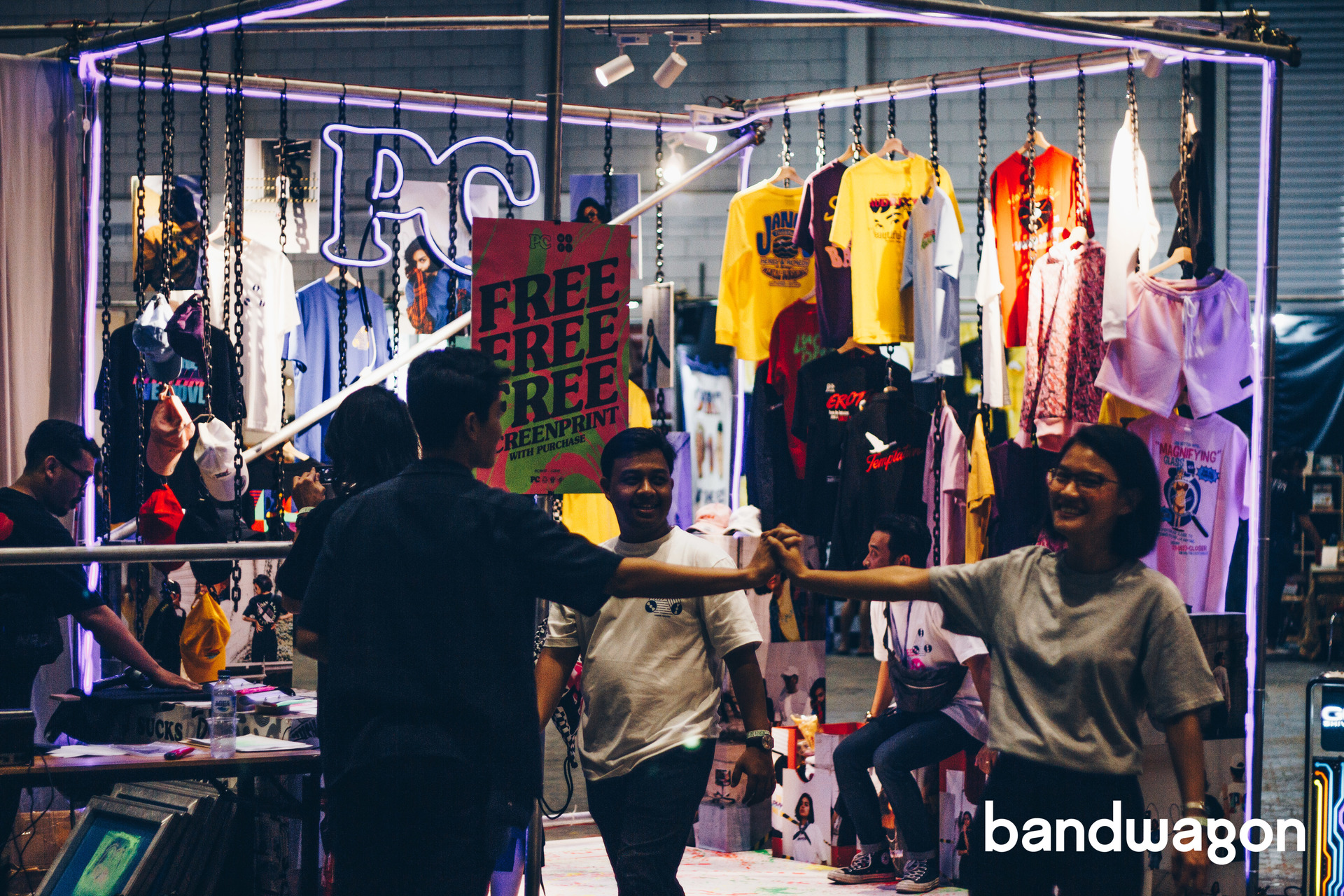 We’ve seen a few formidable festival villages in our time, but going off WTF this year, Ismaya Live is unquestionably one of the best at it. With the sheer variety of programming, from karaoke booths to VR video games and artist stalls and photography pop-ups to stroke your Instagram ego; the interesting mascots walking around that included a killer clown, the rabbit from Donnie Darko and folks who looked like they escaped from either the Blue Man Group or Brockhampton; and the excellent festival food that you paid for with tokens, WTF boasted extra-musical attractions that rivaled its stellar line-up.

And the crowd, whether Indonesians or foreigners like us who flew in just for the music, lapped it up. Even with the number of brands present, capitalizing on the festival as a form of advertising for millennials, we still tip our hats to WTF for pulling it all off. It truly was a blockbuster experience.

Special thanks to Ismaya Live for the invite