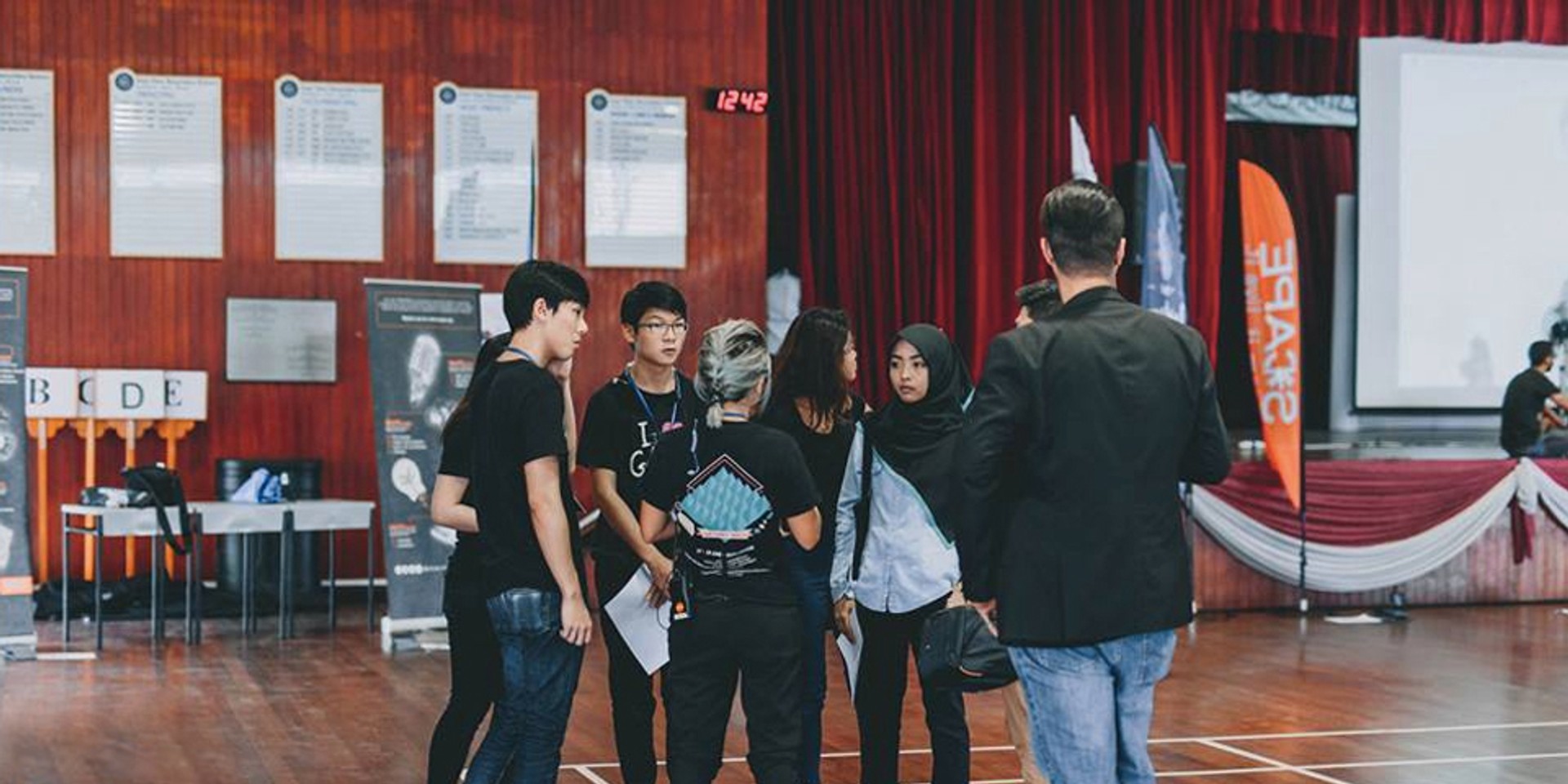 Knowing it’s close to the end of a school term, there’s an undeniable sentiment of unrest and urgency that permeates the school hall.

In East View Secondary, the students are visibly excited — thoughts of long afternoons with nothing but the open-ended world of the internet and their carefully-curated selection of phone apps to guide them through hours of homework-free sessions. Nothing but the comfortable confines of their bedroom to reside in. No hurried wake-up calls at 6am, no long-winded lessons, no chance of detention and most importantly, (this is important, as you remember how being a regular 14-year-old was like) no homework. 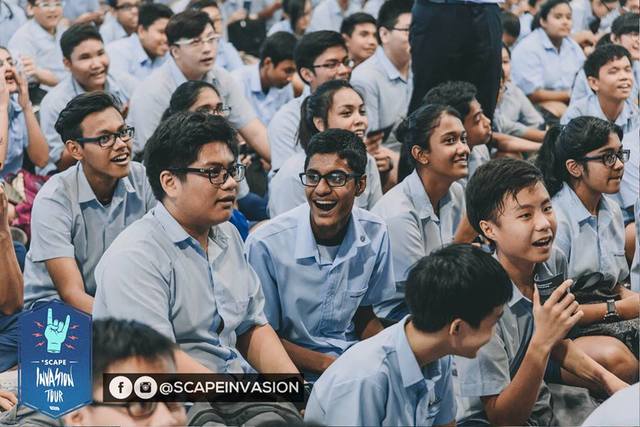 That was the prospect the students were facing and they were salivating. Of course, this was a day when they were paid a visit by the ongoing *SCAPE Invasion Tour, the one they’ve heard all about, whether they’ve been keeping tabs through social media, or through their friends on WhatsApp. I’m just assuming that’s how news gets spread through millennial students — we’re far from days of scribbled, crumpled foolscap paper passed around classrooms.

The students marveled at the stage, adorned with the Tour banners and equipment. This show was notable for one thing, other than the fact that this was East View’s first big exposure to Singaporean music. Over at the *SCAPE Invasion camp, they took a step back from supervising all the logistical steps needed for the show this time around. Being the ones toiling at every show, tirelessly making sure nothing goes wrong, they were able to get a few helping hands from their volunteer-based *SCAPE Invasion Tour street team for the past few shows.

Now, they’ve decided to let the street team run the show by themselves. But not without the watchful eye and the guiding hand of the main team at their back and call. 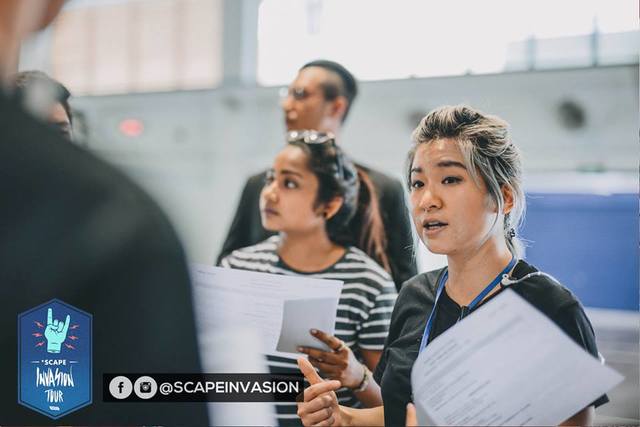 The small group of volunteers aren’t that much older than the audience — either adjusting to the poly courses or finishing up their secondary school education, they’re getting a taste of the tour grind, *SCAPE Invasion-style. October is the last lap of school tours in 2015 so they’re hustling through three full weeks of performance dates. This means setting up and dismantling gear and peripherals for one school, and then immediately head to the next school to follow suit. It’s a tough life, but by the looks of it, the street team is enjoying every minute.

For East View’s Invasion show, they were entertained by Joie Tan’s soul-baring tunes, sweetened by her restlessly perky demeanour, and the stripped-down asset of Michaela Therese’s most potent weapon at her disposal: her voice. The students were entranced for most of their sets — as expected, youths at their age aren’t predisposed to sit still and be quiet unless told to, and we can all relate to that. But for the majority of *SCAPE’s allotted time in East View’s hall, they listened. 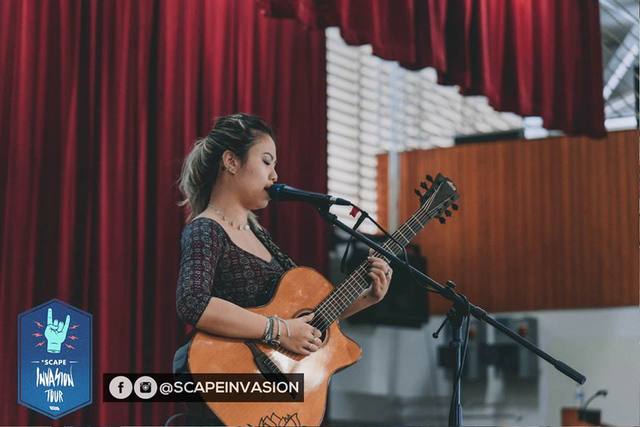 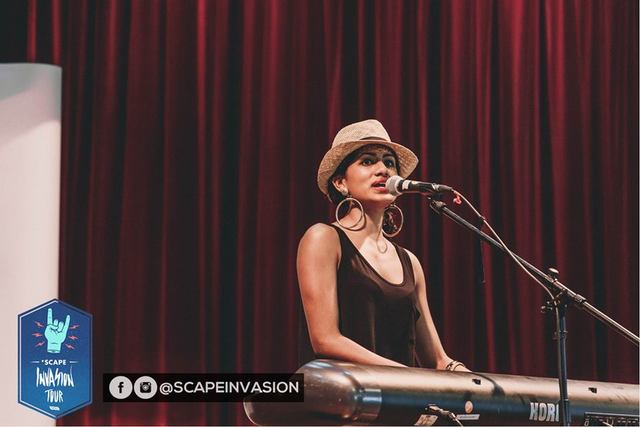 Even as Invasion Singapore honcho Hyder Albar told his own story, in hope to inspire the crowd that they’re truly capable of big things with a boatload of elbow grease and a persistent attitude.

But that’s where the street team plays a part beyond the legwork: they embody the gospel of *SCAPE Invasion. Each of them are dedicated to building and nurturing Singapore’s music scene through various avenues. We can only assume each of them harbour their own hopes and dreams and whether or not they align with *SCAPE Invasion, it shows this tour is more than just a stage show with loud music and fleeting words. It’s likely to be the breeding ground for a new generation of arts-centric visionaries who look beyond the challenges of a thriving organic arts culture in Singapore.

The best part is that they’ve already started. Watch out everyone, the kids are taking over.