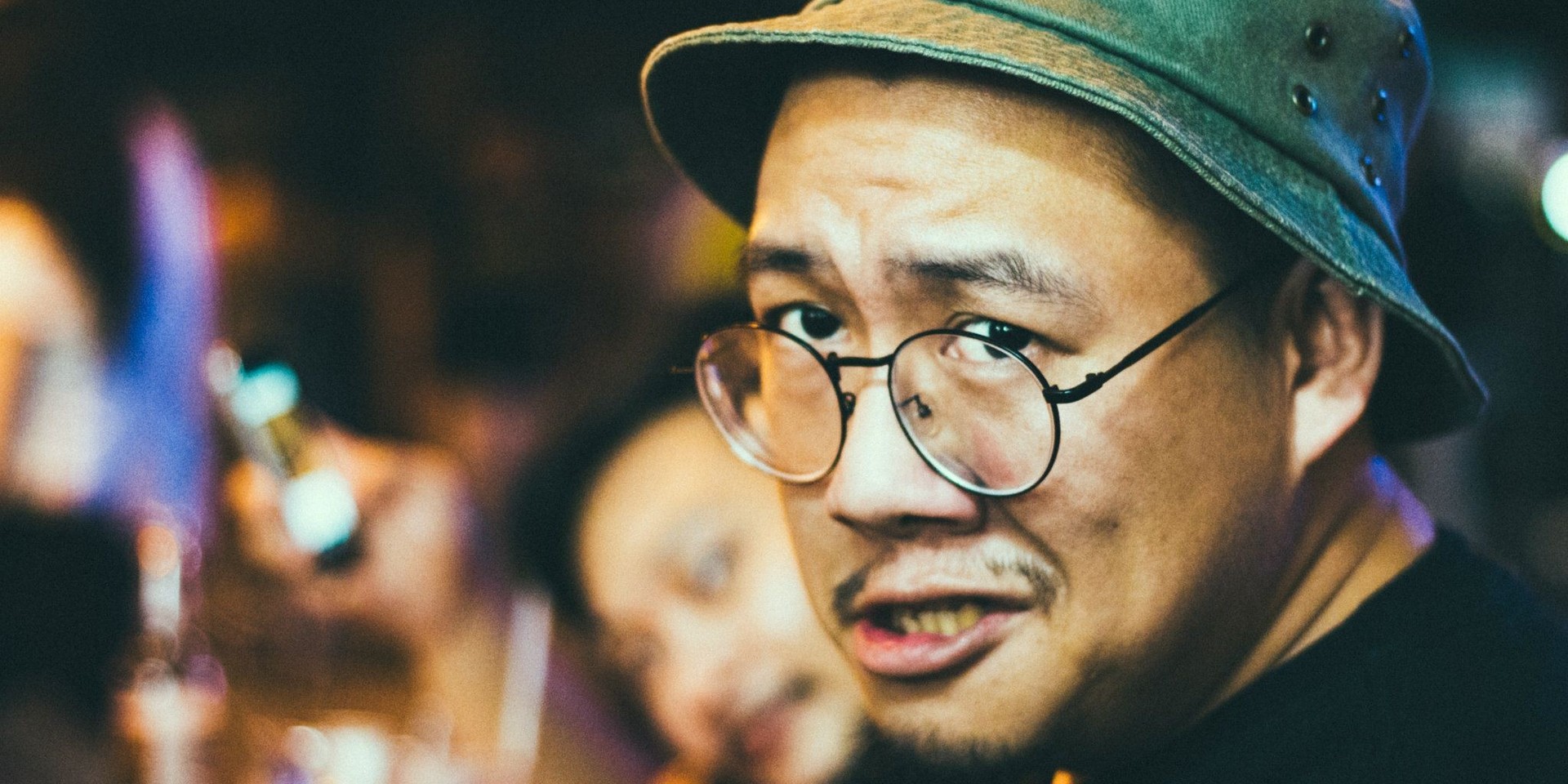 Over the last 8 years, Good Times has always been known for its quality music and friendly atmosphere.

But beyond the beers, bands, DJs and no-frills party experience, the most noticeable thing about the party series has always been its outstanding artwork. Drawn by the night's co-founder, fans and attendees are consistently blown away by the mind-blowing vision and quality of Eric Foenander's (aka The Town Jeweler) lovingly designed posters.

It'd be one thing if the busy freelance artist took his time to craft these beauts every once in a while - but he does it on a monthly basis, and every single one of his creations have been primo. And just to be clear, being Good Times' resident designer isn't even his full-time gig. Eric is the former art director at Ogilvy & Mather, and one of the most in-demand artists in Singapore and around the region. 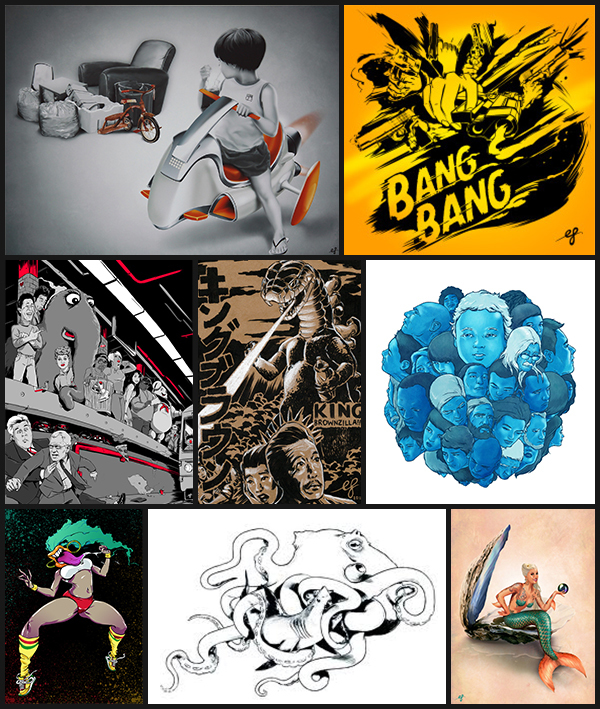 Check out some Eric Foenander's breathtaking illustrations above. 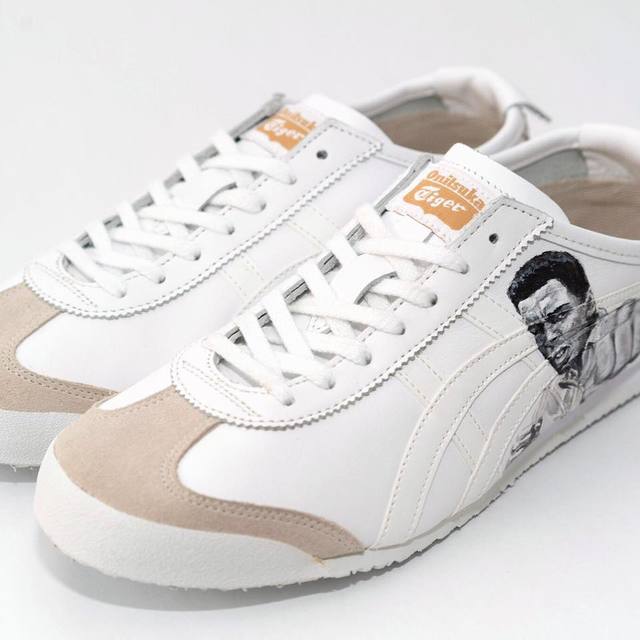 His body of work includes sculptures, oil and acrylic paintings, digital artwork, apparel designs, murals and more for a variety of companies, publications, restaurants and galleries. Trust us, his plate is full. And yet, Eric still manages to turn out legitimately awe-inspiring posters for Good Times each and every month - simply because the night is his baby and one of his purest passions.

With Good Times hurtling fast towards their big 8th Anniversary party, headlined by Homeboy Sandman on August 5th, we asked Eric Foenander to select 8 of his most beloved posters over the last 8 years. Including NYE specials and pop-up events alongside his monthly work, there's certainly plenty to pick from! But after much deliberation, here's what Eric had to say about his final picks. 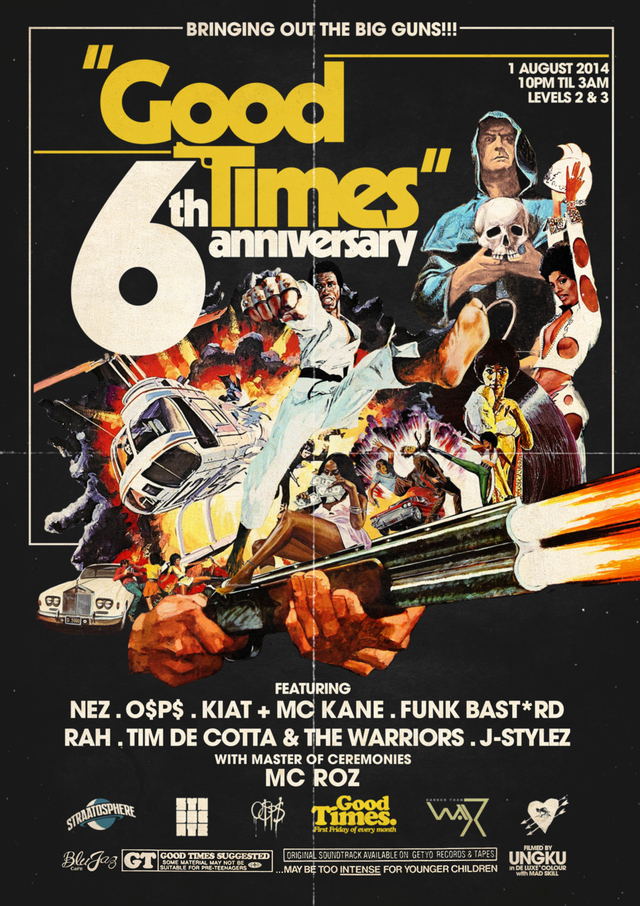 "This was the poster I did up for our 6th Anniversary back in 2014. Obviously paying homage to old school Blaxploitation movie posters, I cut up poster art I got off the net and created my own faux movie poster. 'Twas a dope night once again, and I even made some tees of it that a few lucky ones bought." 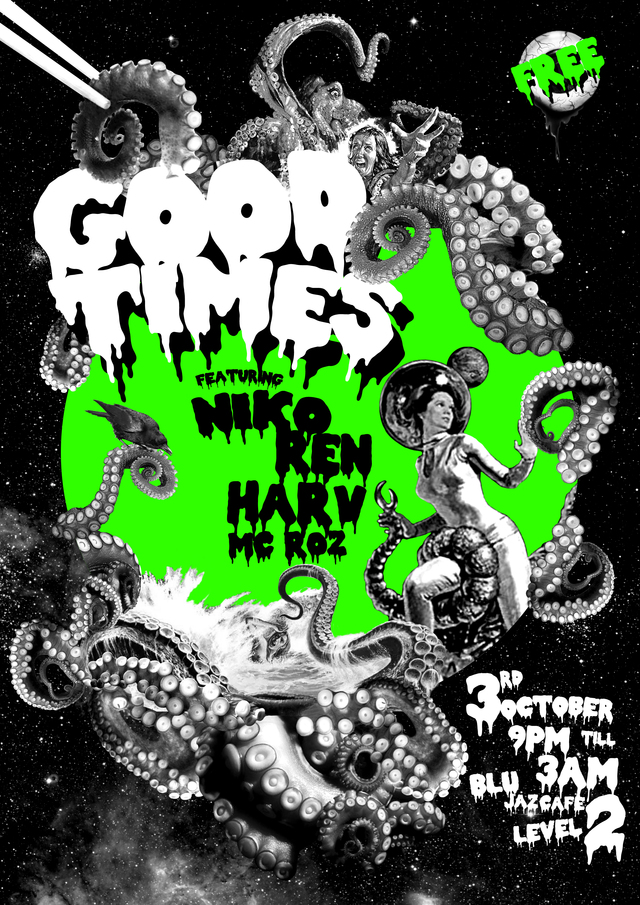 "This poster makes the cut of my top 8 cos it was the first thing my girlfriend, Dawn Ang aka aeropalmics, worked on together, for a bit of fun. We ended up realising that we could co-exist creatively and we now work together tons. Phew." 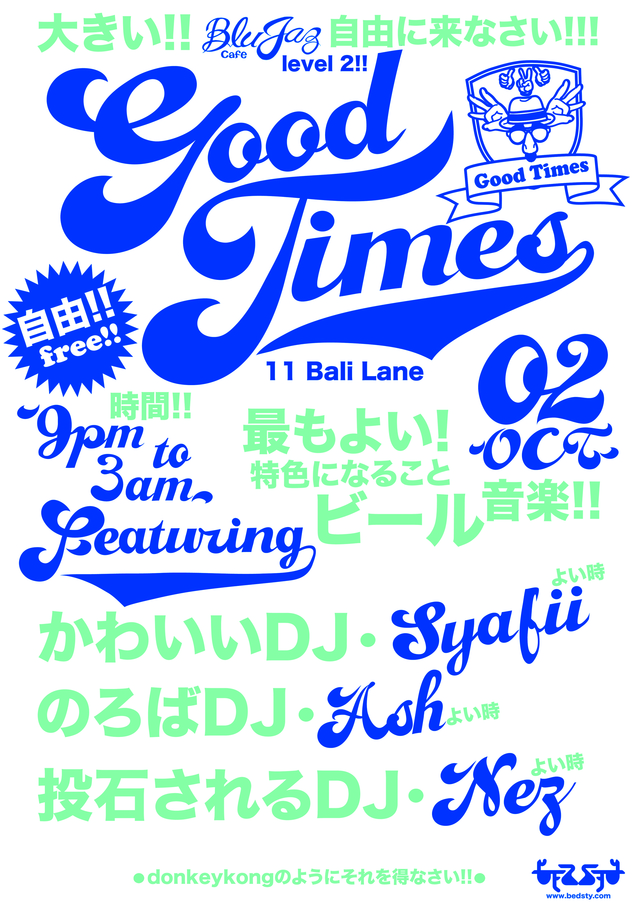 "I strayed away from any illustrated element and the Cooper font in this, and decided to go weird on the typography. I crafted the logo and the other bits in blue, and went manic Japanese on the whole vibe. I kinda channeled different elements from the Pocari Sweat packaging and the Superdry logo." 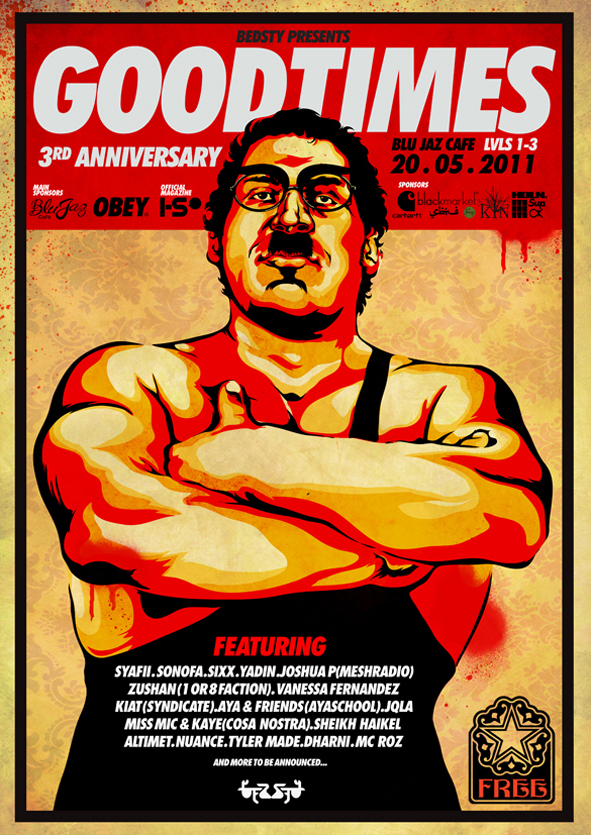 "Another anniversary poster - our 3rd. We had the pleasure to work with OBEY Singapore to throw this massive partay, and I put my spin on Andre the Giant with our iconic Groucho Marx glasses/nose/moustache/eyebrows get up. I reckon this is when we started to hit our stride and figured out what Good Times wanted to be." 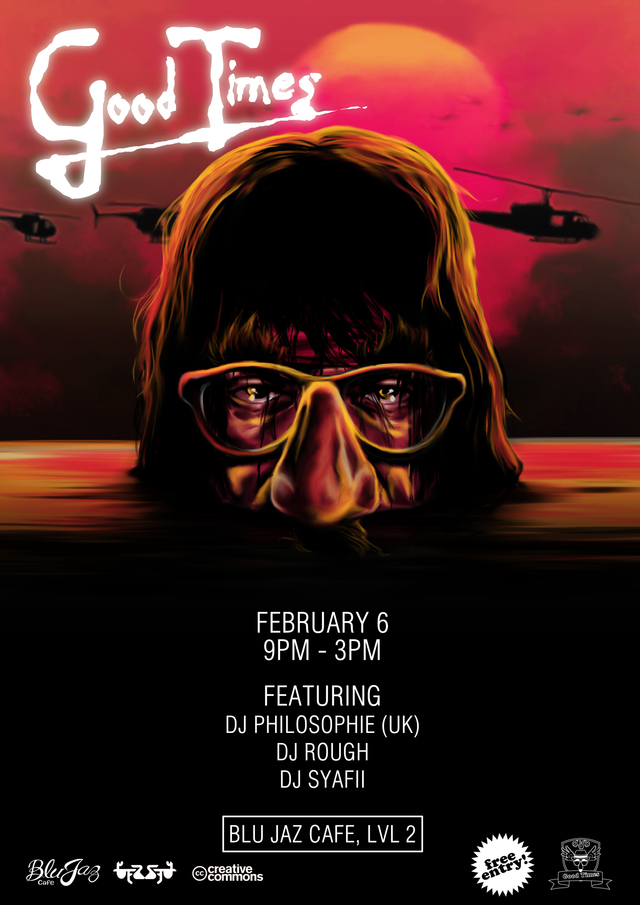 "Syafii Ghazali's (co-founder of Good Times) personal favourite, I remember him telling me back in the day. Once again Groucho comes out to play, this time on John Rambo's mug, slinking outta the swamps amidst an Apocalypse Now backdrop. Genius you say? Sure. 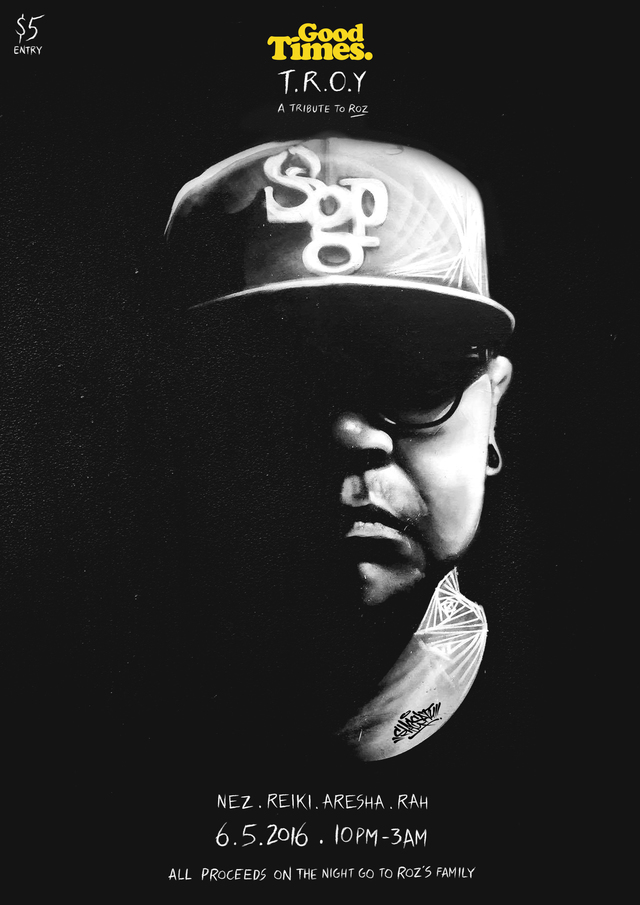 "This poster means alot, for obvious reasons. The Good Times fam decided it wouldn't be right if we didn't hold a tribute to our late, great MC Roz who passed away a few months ago due to health complications. The main image was done by amazing local spray-wiz Slac Satu. For those that were there, it was most definitely an emotional, as well as utterly banging, night. Just like how Roz probably wanted it to be. Peace, my brother." 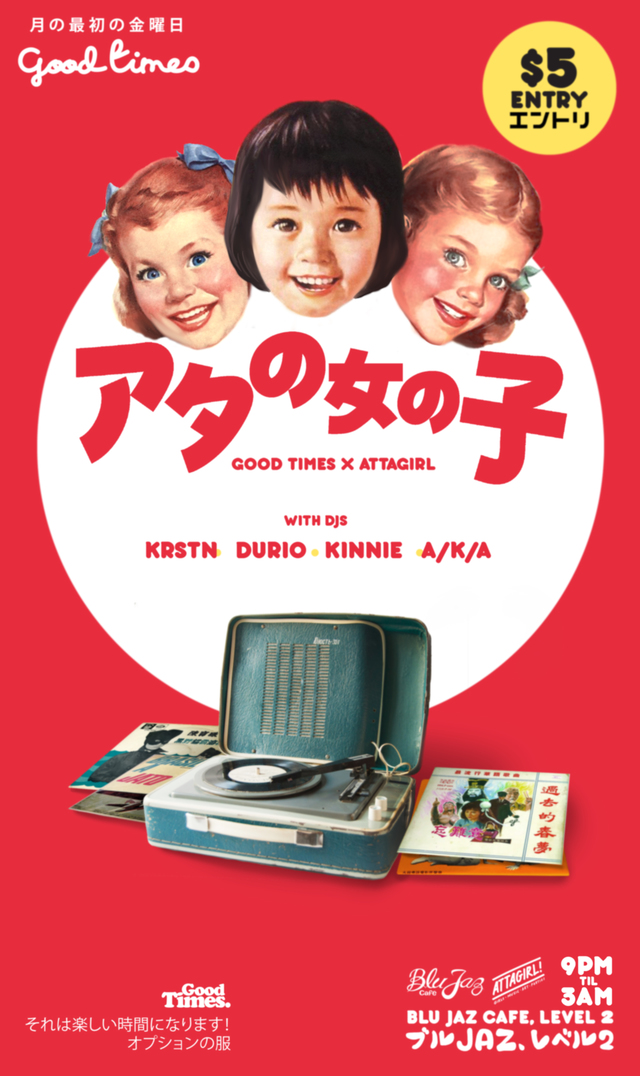 "Really had fun with this poster. I based it on some Glico cream-filled cookie packaging design I saw whilst grocery shopping. Them three bambinas obviously are Jaydah, DuriO and A/K/A, the head honchos of ATTAGIRL."

(Editor's note: This one is our lead designer Natasha Hassan's favourite!) 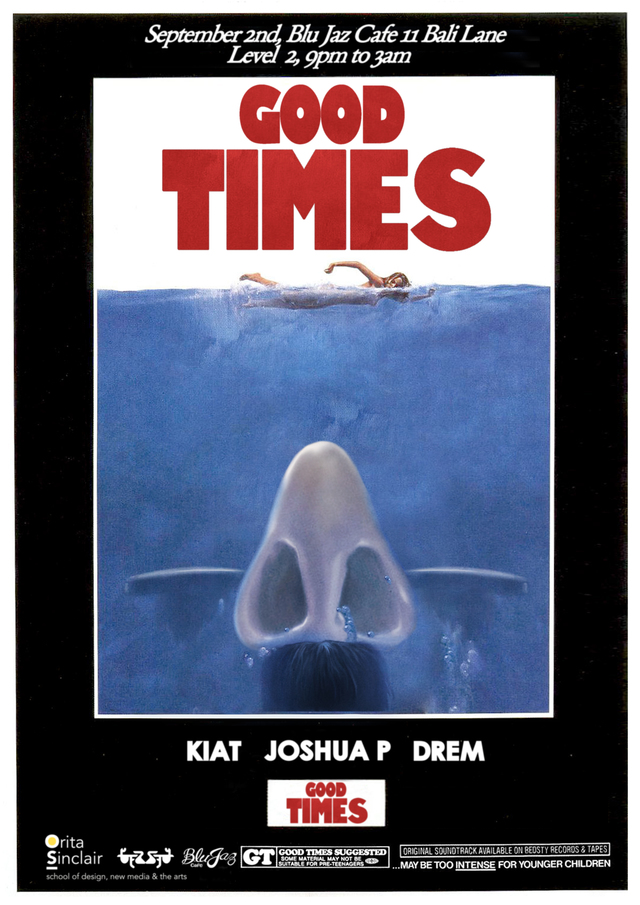 "We don't take ourselves too seriously, as you guys probably can tell by now. I mimicked the classic JAWS movie poster from 1975 and tweaked it to be an event poster, once again showcasing the Groucho Marx nose and mo. I actually don't know why (can't remember?) I decided on that being GT's icon. Ah well. I dig the poster." 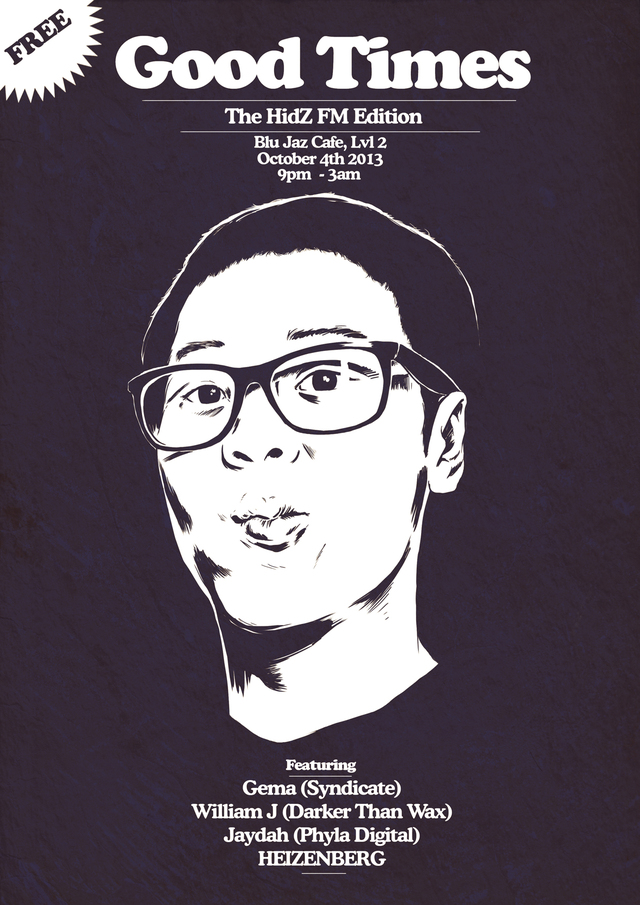 This one is my favourite, duh.