Words by Louisa May Chan
Photography by One Production

Very rarely do you get a predominantly male audience at a K-Pop concert in Singapore, but if South Korean girl group TWICE's concert on 17 June proved anything, it's that male fans are just as capable of being hardcore K-Pop fans as female fans.

The group performed to approximately 8,500 fans at the Singapore Indoor Stadium last Sunday evening, reportedly double the amount compared to their previous show in the country, a remarkable achievement for a group that's only three years old. If you're a fan of K-Pop, you've likely heard of TWICE. The multinational group has a number of hit songs under their belt, not to mention a strong following, and are at the top of their game right now. At the concert, I was determined to see what made the group stand out. 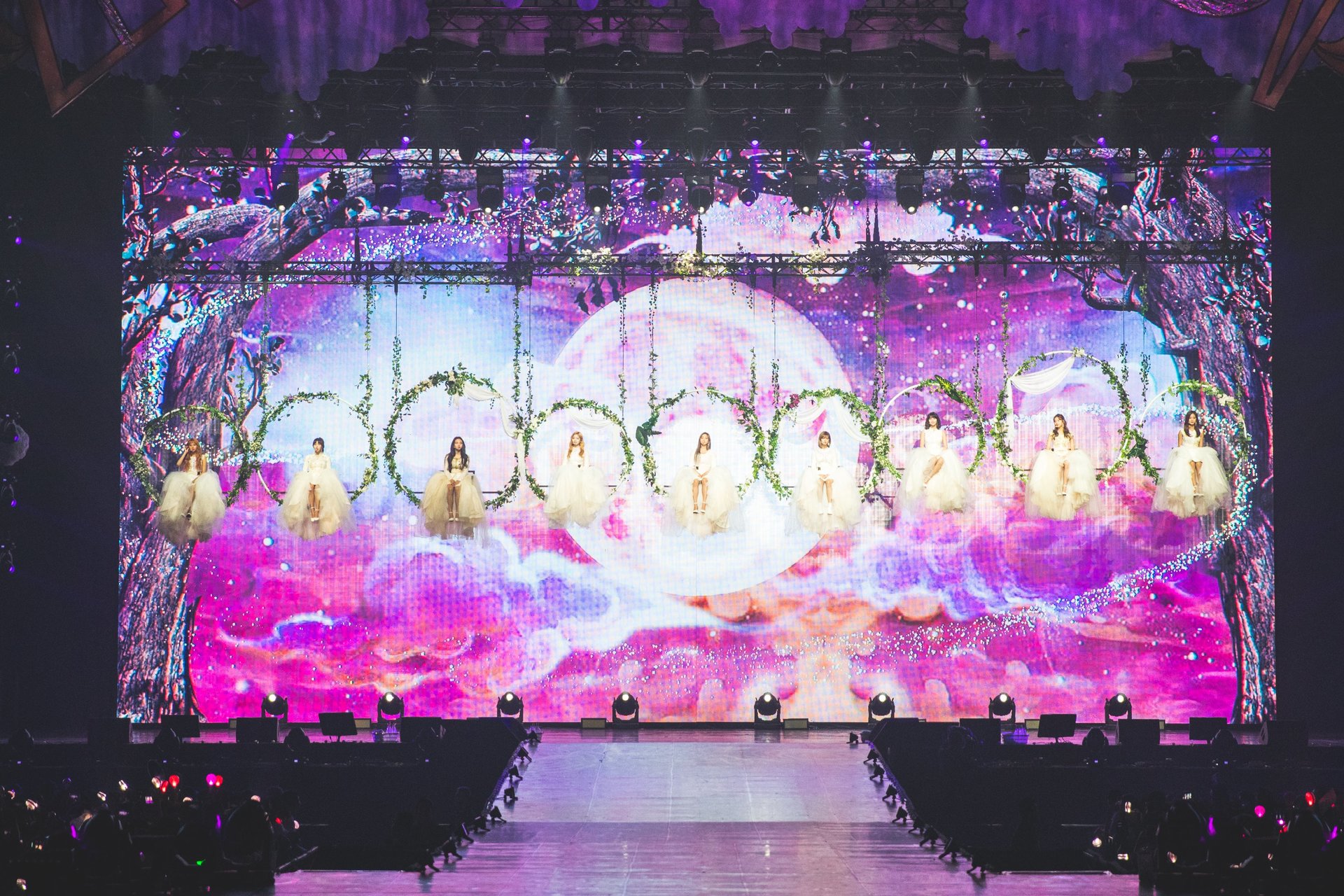 Upon entering the stadium, I was greeted by a stage that was equal parts whimsical and magical, topped with a banner in the form of  a rainbow cloud, with funky shapes sprawled over and the word "TWICELAND" in glittery pink letters on top, true to the fantasy park theme. The overly-packed standing area was full of male fans — TWICE's main fanbase — and like their female counterparts, several of them possessed the group's light stick.

An introductory VCR was played prior to the concert, and rather than hearing the usual piercing screams of girls I'm so accustomed to, roars and cheers by men filled the air. The members entered the stage dressed in pristine white gowns, on swings adorned with flowers, performing the affecting ballad 'You In My Heart'. But this was just the start, and TWICE had much more to offer, as they promptly returned following a costume change to perform their familiar upbeat, bubblegum-pop numbers 'Like OOH-AHH', 'Cheer Up' and 'LIKEY'. The audience lapped it all up, responding with fervent cheers and well-timed fanchants. The stage felt full with the nine members dancing passionately on it, backed by a live camera feed encompassed within pretty pink graphics and filters.

What followed next was a series of acoustic performances — the stage transformed into something like a dream sequence, embellished with clouds and snowflakes, illuminated by miniscule fairy lights that mimicked stars, and underneath that the group performed their mid-tempo ballads including 'Someone Like Me' and 'Turtle', retaining the grace and elegance they exhibited in their opening performance. 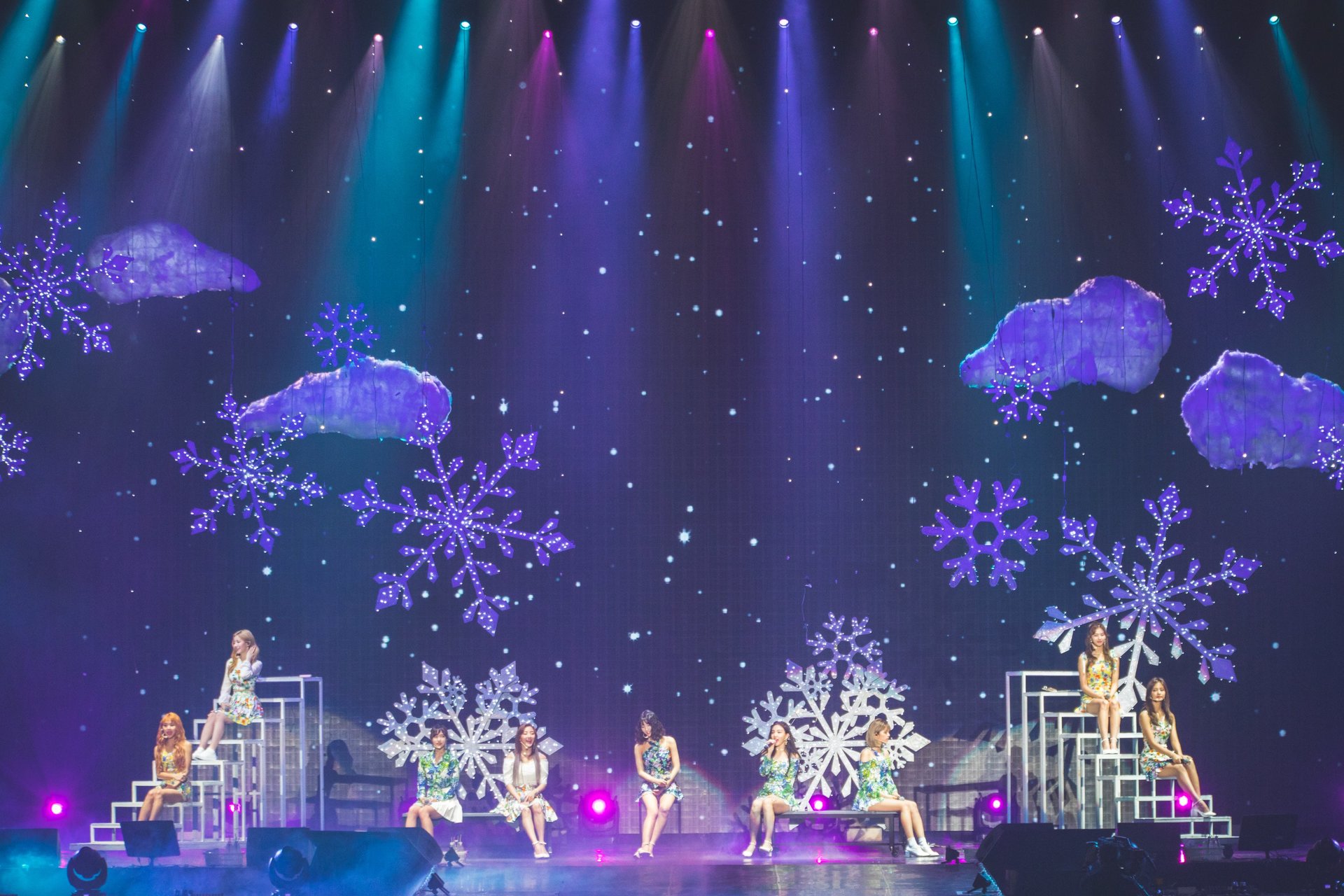 At this point, we were an hour into the show, and I started to wonder when TWICE would pull the plug on their whimsical concepts and show a different, more refined side. The group exceeded my expectations and completely crushed the misconception that they're only capable of executing cutesy concepts, as all nine members returned to the stage decked in pinstripe suits, playing into the ultimate girl crush concept that fans have been yearning for since their last attempt at it during their debut. In fact, the pinstripe suits felt like a step above the Harley Quinn-esque concept the group went for in their debut: they were polished and refined, showing a level of maturity that blossomed in the three years since their debut — and their performances reflected that as well.

TWICE was eager to give, as they presented their audience with rare performances by units and soloists: Dahyun doing her take on Rain's 'Rainism', wittily re-naming her rendition 'Dahyunism', Jihyo, Momo and Tzuyu confidently taking on Beyoncé's 'End of Time', and Nayeon and Jungyeon defying gender roles and re-enacting Baek Ji Young and Taecyeon's 'My Ear's Candy', a sexy duet. The unit comprising Sana, Mina and Chaeyoung strayed a little further from the path though, as they performed the retro hit 'Oppa' by soloist Wax, a treat for their fans as the term is used by Korean girls as a form of endearment for older males. 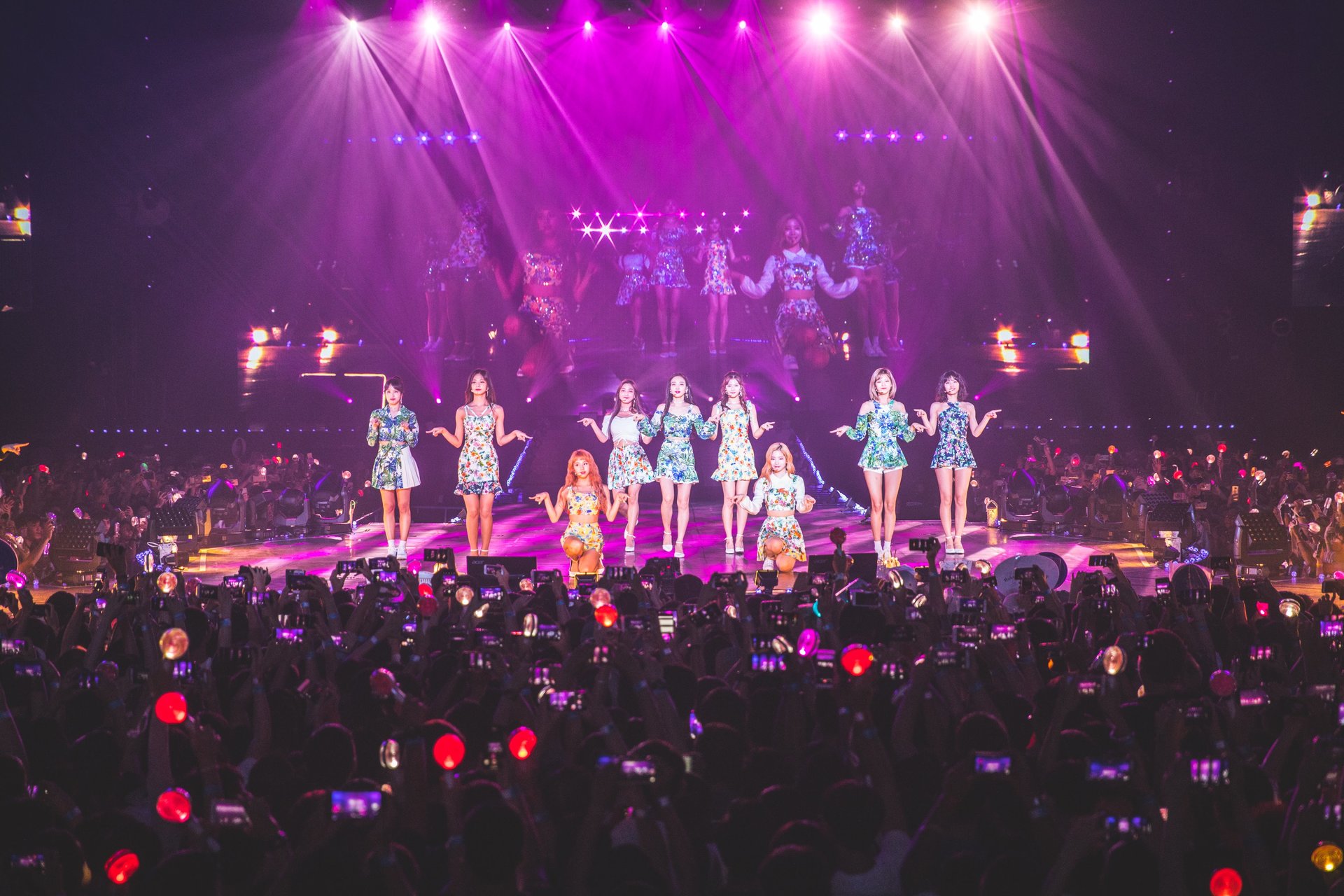 The group breezed through the remaining performances, including ones of their title tracks 'Knock Knock', 'What Is Love?', and 'TT', and yet another cover of WINNER's smash-hit 'Really Really' — all done equally well as the ones that came before them, albeit a tad less impactful than their electrifying girl crush stages, but nonetheless equally thrilling and delightful.

Ending their set with 'Heart Shaker', TWICE could've put a stop to such a wonderfully planned show there and then, but decided to give more to their fans who had waited a whole year for them, giving them the most heartwarming encore beginning with 'One In A Million'. With lyrics like "You’re the only one in the world, you’re a masterpiece, you’re perfect the way you are... You gotta know that you're one in a million", the track was the perfect down-tempo, soothing, soft pop track to masterfully open TWICE's encore.

Following the group's performance of an acoustic version of 'What Is Love?', a fanmade video was played, expressing the love of thousands of Singaporean ONCEs and promise to wait for the group's return, as they have for the past year since TWICE's last concert in Singapore. Fans were instructed to hold pre-distributed banners at the end of the video. "We will always wait for TWICE", the message on the banner and the video conveyed put the group at a loss for words, moving Jihyo and Jeongyeon to tears.

It's not often fans get to express their immense love for their idols, especially with such a large-scale fan project, one that was executed successfully and beautifully, and it's definitely not often you get to move your idols to near tears — this was sure to be a memory for both TWICE and Singaporean ONCEs. The members each thanked their own fans in their own way, expressing their joy at all the love given and reassuring them that they would return again for their concert next year. The group bode farewell to fans with a sequence of choruses from their hit title tracks, a trip down TWICE's memory lane and that Sunday evening. 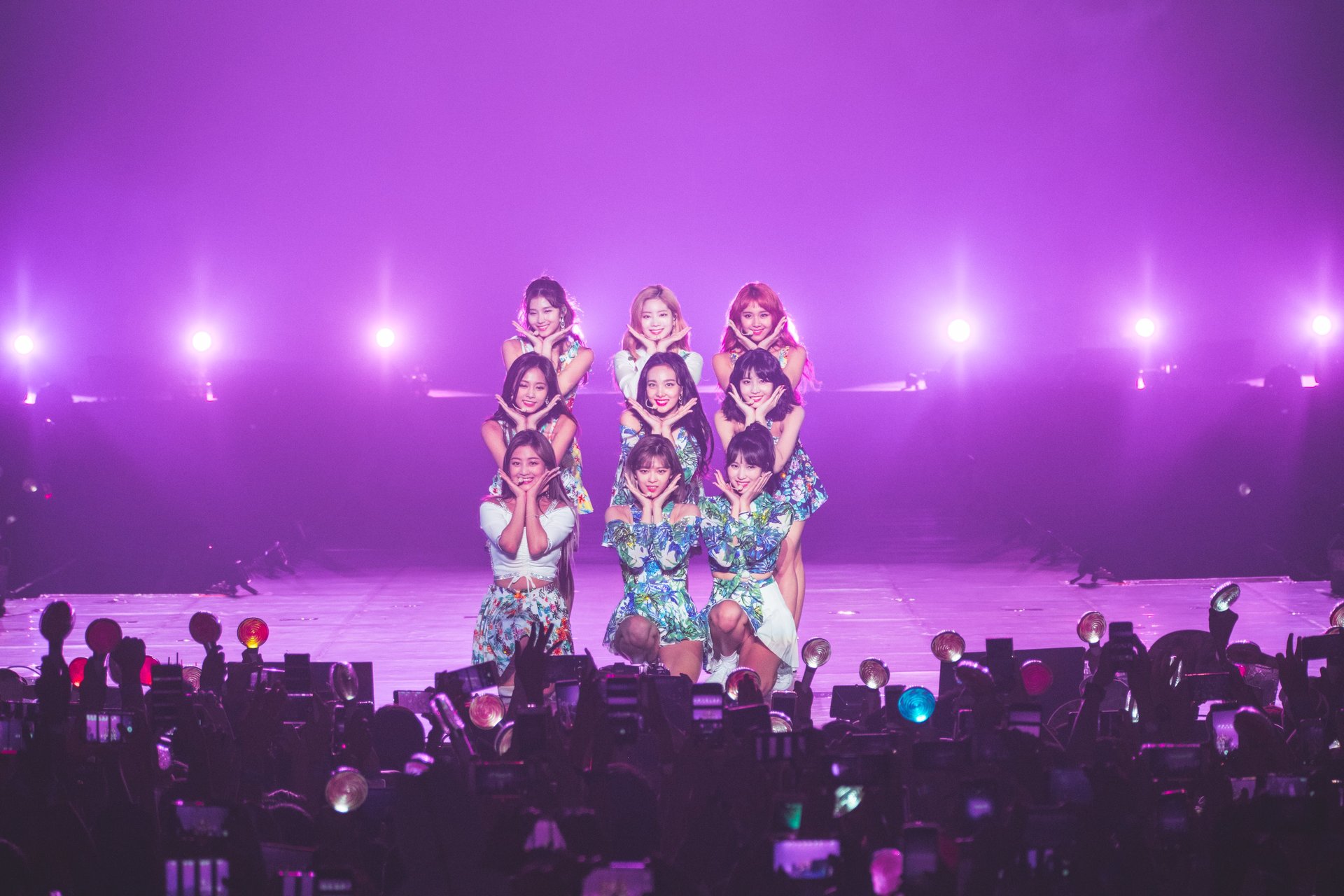 While K-Pop acts have been known to tour Singapore and sell out venues here, for the nine-member group to have staged their near-sold-out second show here within three years of their debut is remarkable, and clear evidence of their standing — TWICE is at the forefront of K-Pop, and this proves it.

The group's success is attributable to their music, and of course, visuals that stand out in such a demanding industry. They're the resident representative of the cookie-cutter, cutesy sound that has long been associated with K-Pop, and damn if they don't execute those cookie-cutter concepts and bubblegum-pop sound well.

Since their breakout hit 'Cheer Up', they've consistently stuck with the same formula of addictive choruses, bright concepts and of course, their cutesy concepts — a winning recipe for success, to be sure. But with TWICELAND ZONE 2: FANTASY PARK, they've gone out of the box, and explored possibilities that don't fit the TWICE box. It's a testament to how far they've come, and how far they can go as a group.

More than anything, the concert was a show of the exceptional relationship the group had with their fans. Whether it was via purchasing a lightstick, merchandise (whether official or not), or letting loose cheers and screams, it was clear the fans had a lot of love and admiration to show for the nine members.

TWICE manages to get bigger and better every year, and I'm certain they'll return with more to show and more love to receive from fans next year. 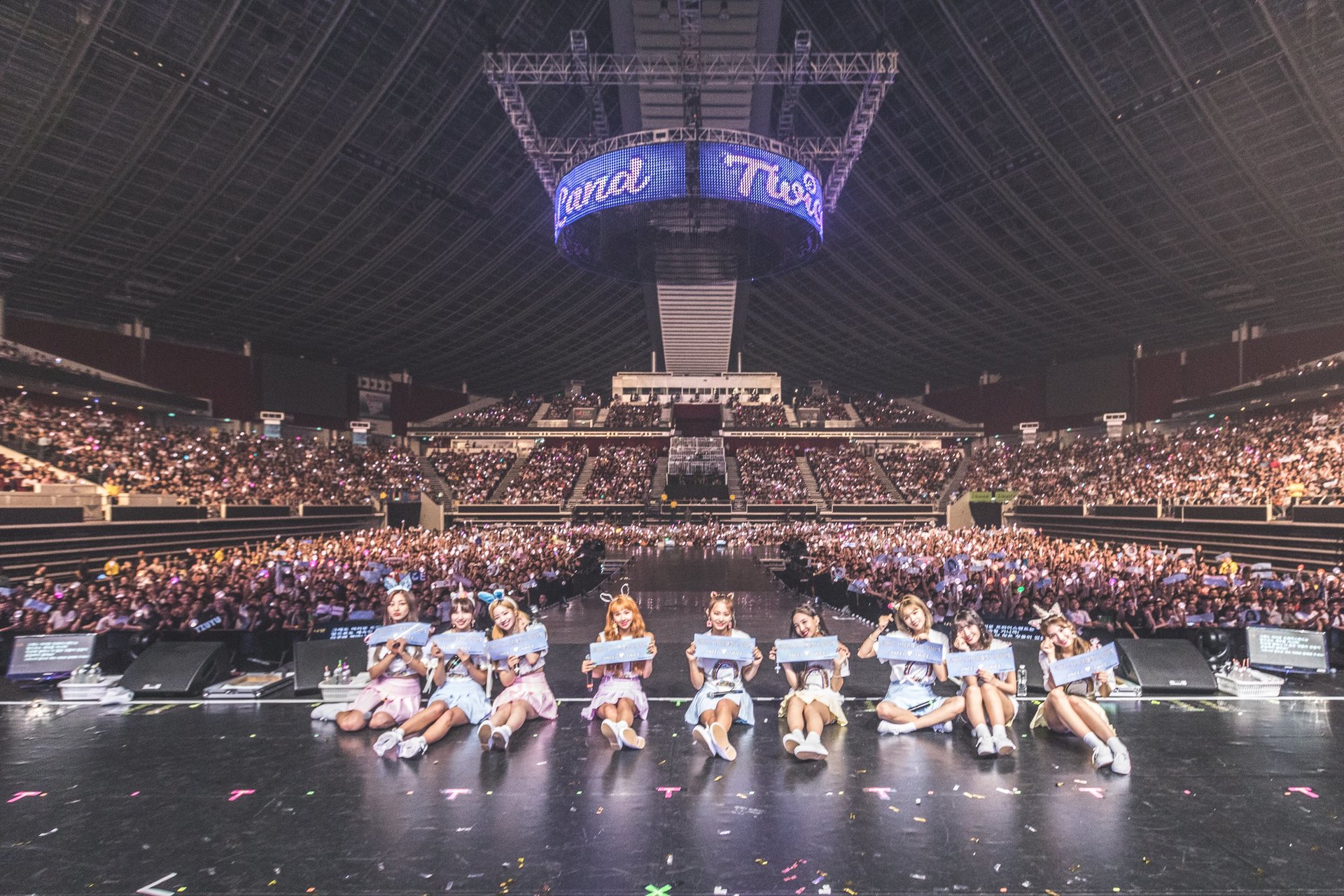