U2, while remaining one of rock’s biggest modern draws, has cemented a reputation for sweeping rock grandeur with a socially-conscious heart — one that arguably first took shape in their 1983 album War, and its third single ‘Sunday Bloody Sunday’. 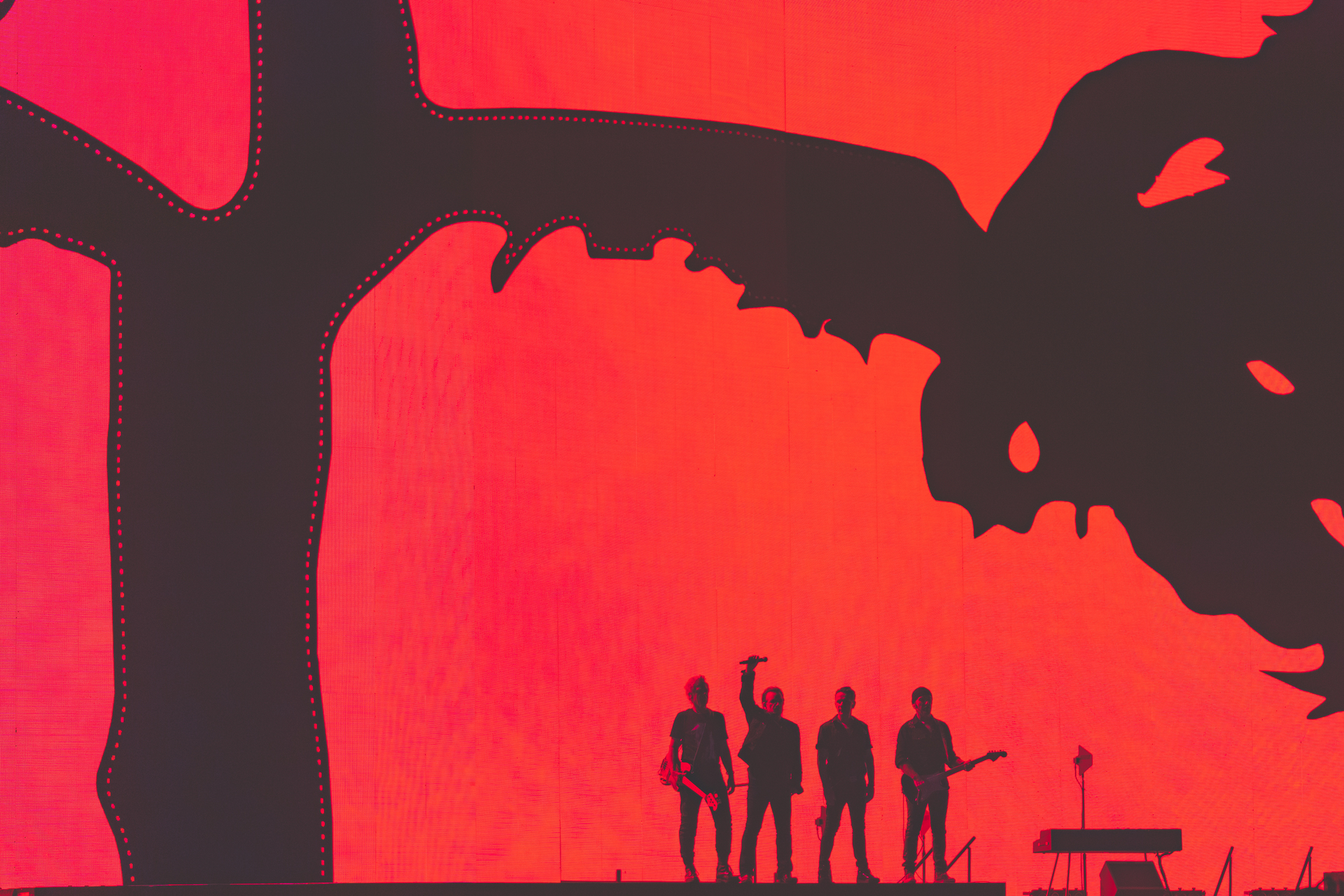 A protest song written in condemnation against the bloodshed of The Troubles and a conflict that hit home for Bono and co., it kickstarted what is constantly portrayed as a “crusade of pacifism”, deeply rooted in the band’s long-held Christian beliefs.

‘Sunday Bloody Sunday’ was the song that kicked off U2’s debut in Singapore, ending a 43-year-long wait that, in the interim, earned them over three generations of fans here. Singaporeans didn’t just catch the band on home turf for the first time — the band brought with them a tour celebrating The Joshua Tree, their 1987 album that cemented the quartet as spiritual rock superstars. The tour was first announced years ago for 2017, a surprise move by a band known for aggressively avoiding nostalgia with evolving album launches and ambitious live stage concepts. 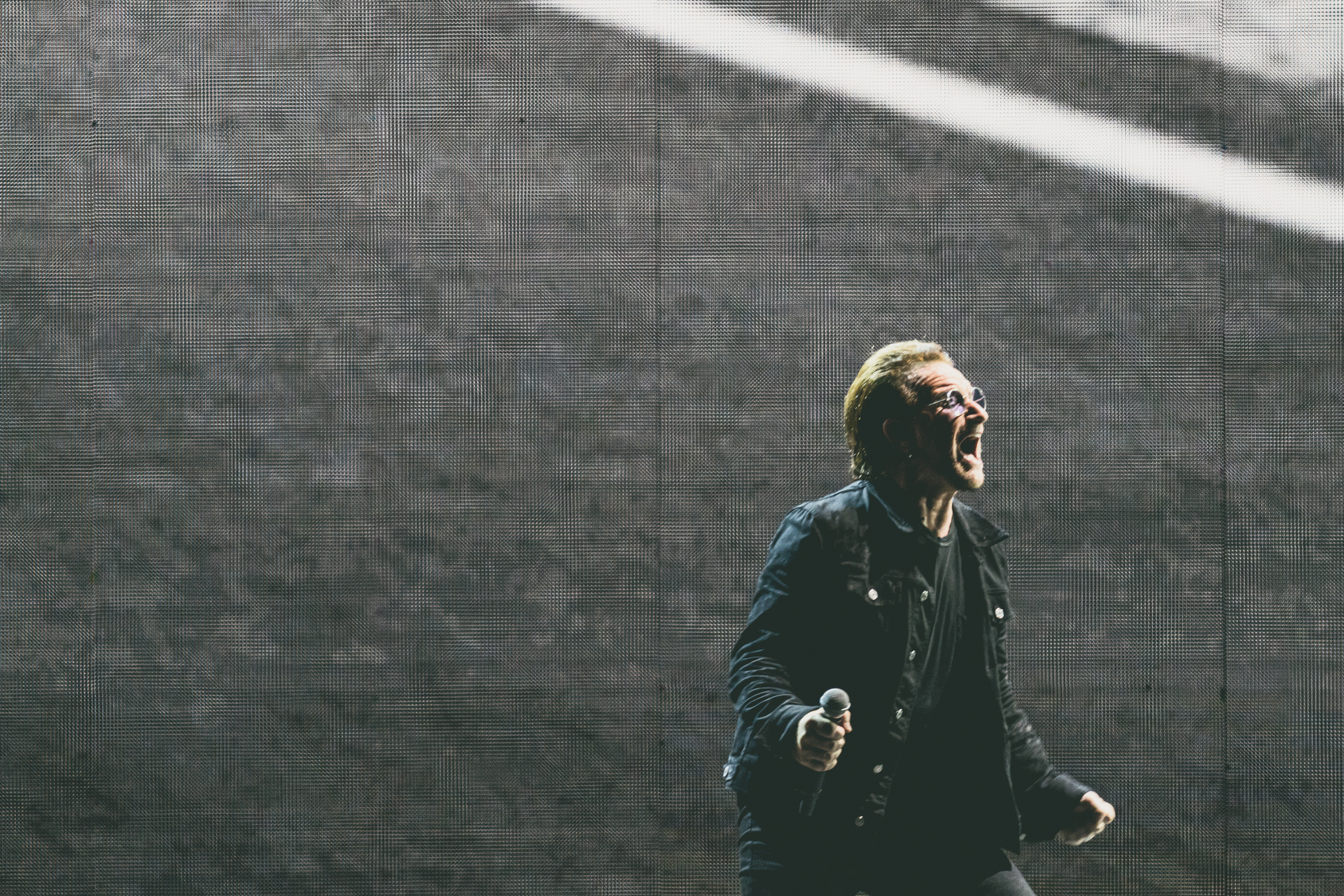 “It’s not really about nostalgia” is what guitarist The Edge maintained at the time of announcement, pointing towards the shifting political issues that inspired the album in 1987 and how the tumultuous politics of 2016 in the US and UK has repositioned the themes of The Joshua Tree to, in the band’s eyes, “come full circle”.

The politics of U2 are central to their craft, but they have no doubt been questionable — the band is infamous for painting worldly issues with broad (read: cliched) strokes, and imbuing their ideology with a tone of sanctimoniousness that has earned them as many haters as adoring fans. Frontman Bono’s career-long philanthropy has also met controversy, even as the band continues to promote his troubled charity (displayed on the large screen towards the end of the concert), and their exorbitant stage productions have also amassed a carbon footprint comparable to a “return trip from Mars” (a problem that the band has since immediately sought to rectify). 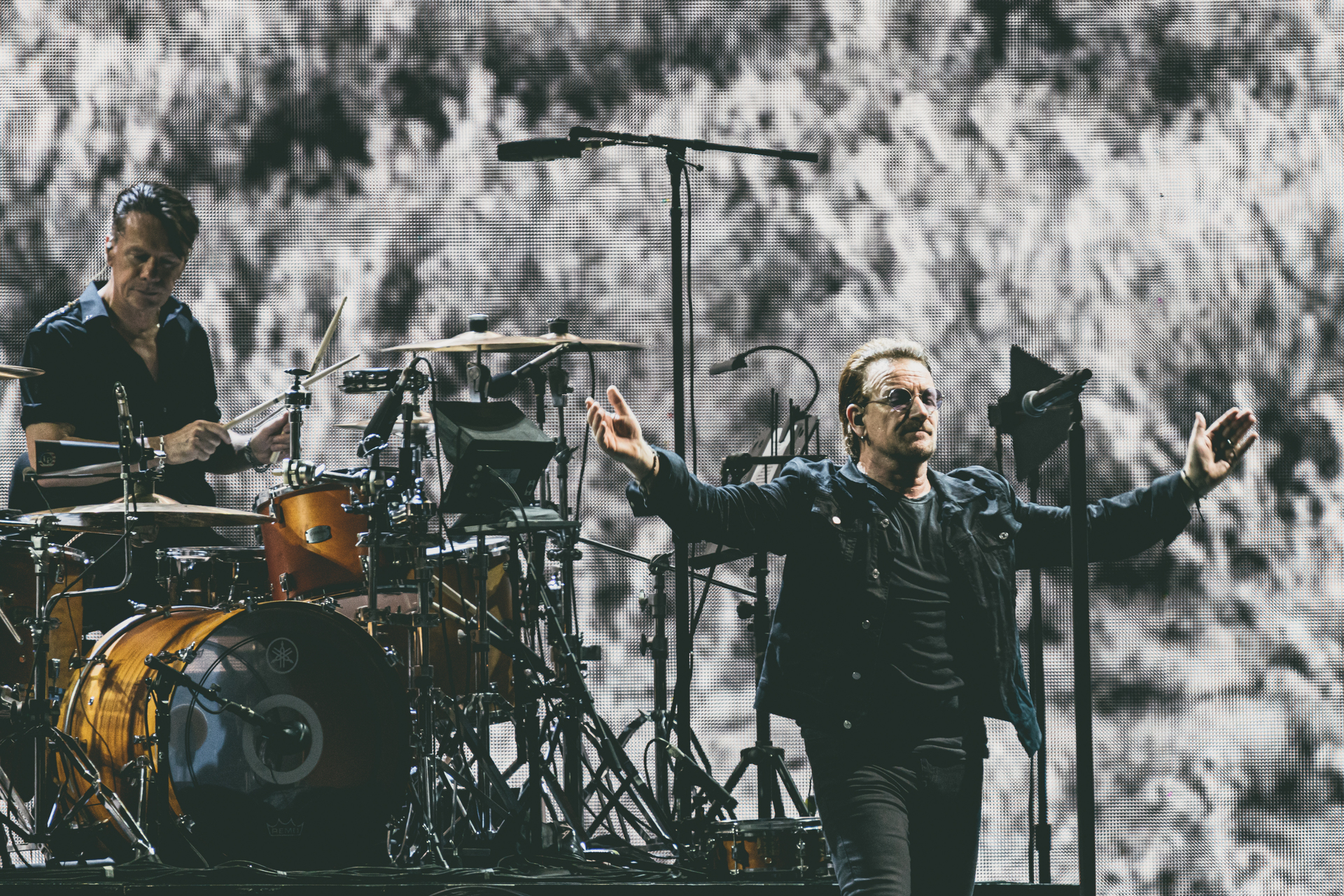 Positioning ‘Sunday Bloody Sunday’ as the concert opener was a commanding reminder of the band’s clear-eyed roots and history with activism. The band, appearing one by one to the 50,000-strong stadium, performed as a four-piece rock band at the tail-end of a constructed runway. All four were present throughout the concert, with no discernible backing musicians to beef up their performance. This jam, which included early-career successes like ‘New Year’s Day’ and ‘Pride (In The Name Of Love)’, was a prelude to the centrepiece of the concert, a full performance of The Joshua Tree.

And with it, came packaged the pomposity of a U2 live show that we’ve all come to expect: During the show, Bono declared that he was in Singapore “looking for rock 'n' roll transcendence” and petitioned to the crowd during ‘I Still Haven’t Found What I’m Looking For’ to “take it to church”, repeating the line to end with different houses of worship — “synagogue”, “mosque”, “temple” — while returning back to steer the crowd to “Sing it, church!” It isn’t hard to trace the line from U2’s arena pop-rock muscle to the backbone of contemporary Christian music, but subtlety was never really their game anyway. 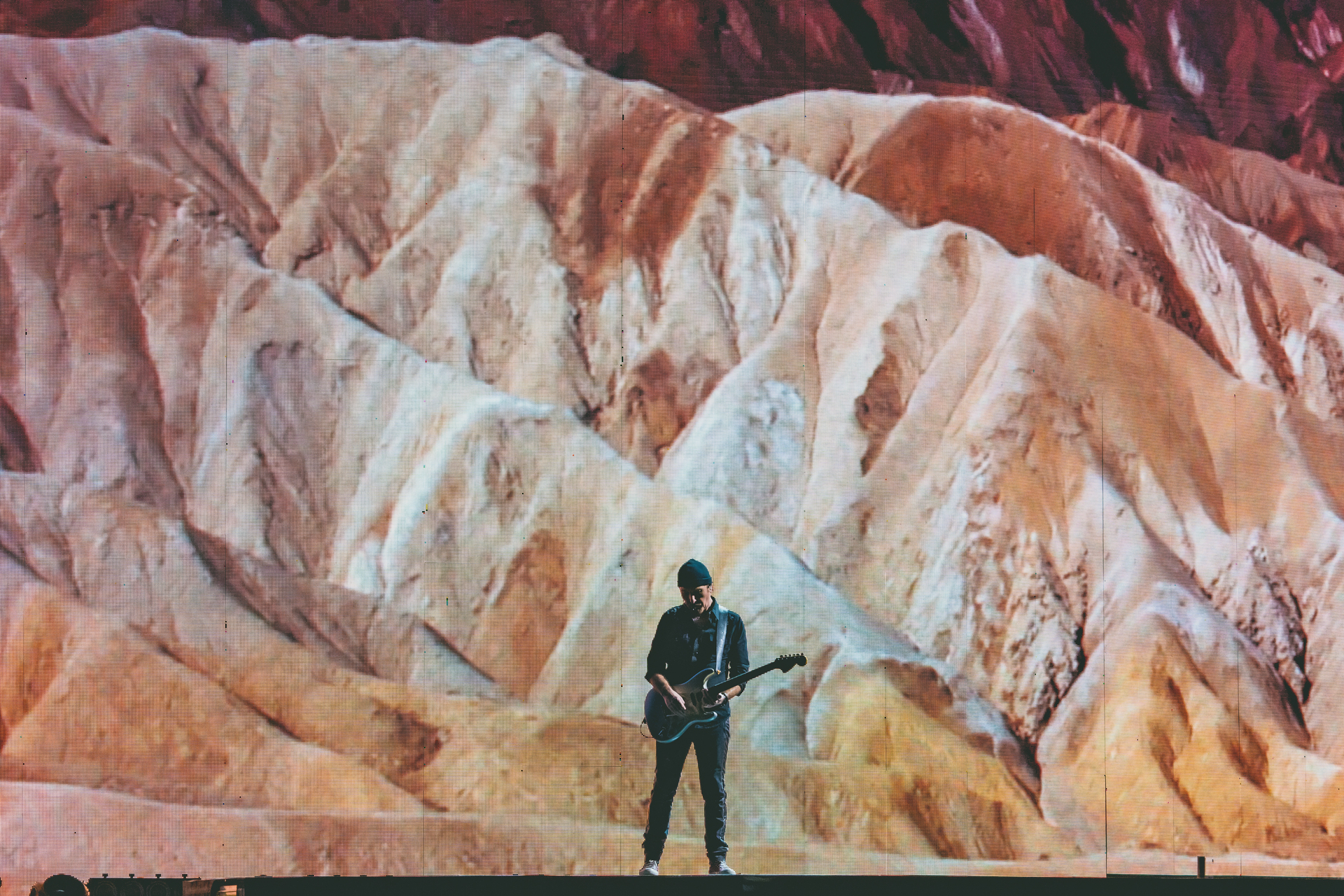 Even if the band’s political messages strike as salad dressing to uplifting crescendos, there’s no denying Bono’s magnetism, soaring above The Edge’s shapeshifting guitar textures and Larry Mullen Jr. and Adam Clayton’s rock-solid rhythmic foundation. With a local crowd that has been aching for their presence for decades, every fan-service gesture (of course the Merlion showed up) and hit single (the only time you’ll ever hear Singaporeans loudly count in Spanish) was pure catnip.

On the last of two nights at the National Stadium, Bono turned his attention to World AIDS Day falling on the same date, dedicating the night to the “heroic hidden figures” fighting the disease. He urged the crowd to “take a moment for a prayer in the dark”, interpolating the solemn moment with a brief cover of David Bowie’s ‘Heroes’. This reverence served the tone for the night as he continued to roll out names like Amnesty International, leading up to a visual segment during ‘Ultraviolet (Light My Way)’, extolling the important women who’ve made an indelible impact on history — from Sojourner Truth to Elizabeth Taylor, Ishikawa Fusae to Greta Thunberg, along with Singaporean icons Margaret Leng Tan and Elizabeth Choy. As far as pandering goes, this really isn’t so bad. 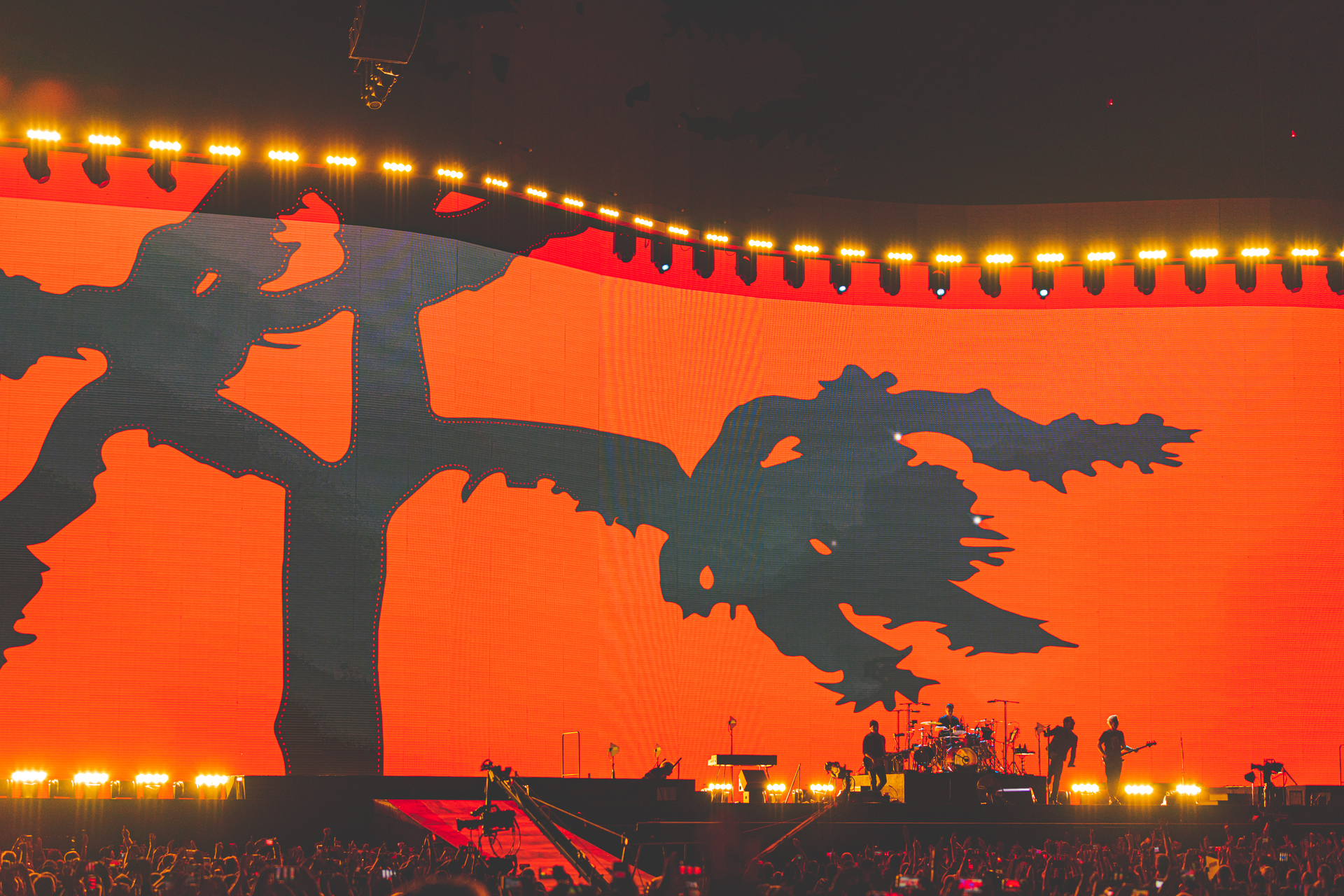 For every ostentatious delivery of platitudes — from bumper-sticker liners like “Love is the law!” to a riff on Martin Luther King Jr with “History doesn’t bend to justice, we have to bend it to justice”, all substituting the noted absence of Coexist — the band never faltered in administering the kind of escapist stadium rock show every U2 fan dreams to see.

Age does catch up to everyone, and they aren’t spared. Bono declined to scale the falsetto heights that pepper the band’s biggest hits — and even visibly catching a breather during ‘Vertigo’ — and his stage movements are now relatively leisurely.

The key word, though, is “relatively”, as he still spent time swinging off of microphone stands and manipulating a live camera feed. A brief costume change also allowed the 59-year-old some time to don a top hat that brought to mind his old sinister alter-ego Mr. Macphisto. U2 nerds in the crowd must have been quaking in their boots. 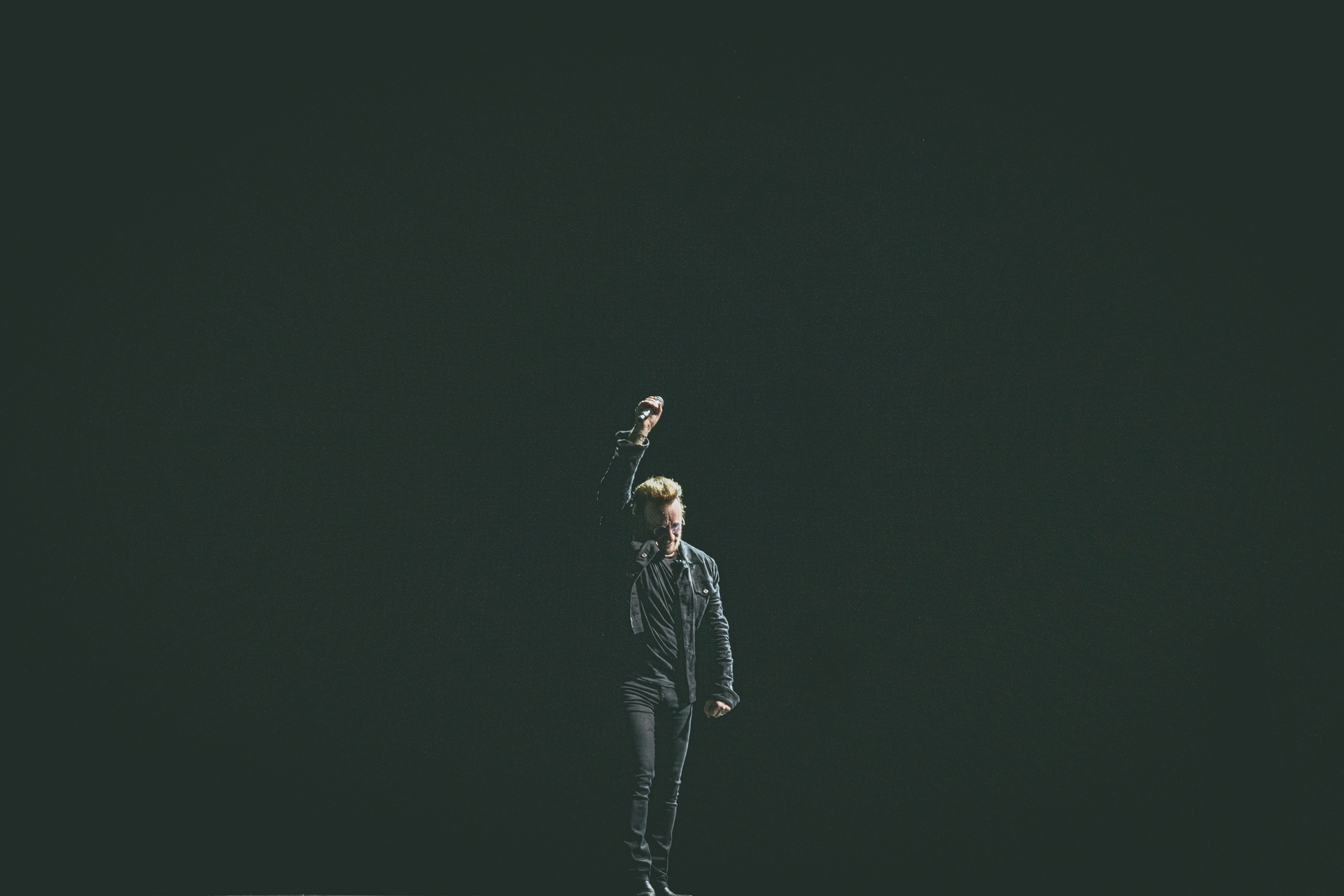 Ending with ‘One’, their signature rallying call for unity (cue phone lights), it’s obvious by now that U2 didn’t set out on this road to convince naysayers or convert new devotees with a fresher, newer sound. Even as they remain unconvincing in their sociopolitical urgency and conviction, the U2 in 2019 is, of course, vastly different from the tenacious post-punkers of 1983. The Joshua Tree Tour, the first legacy tour in their entire career, stays within the comfort zone of a greatest hits showcase given to a congregation who sorely wanted it. And unlike their iTunes stunt, at least you can make that choice.