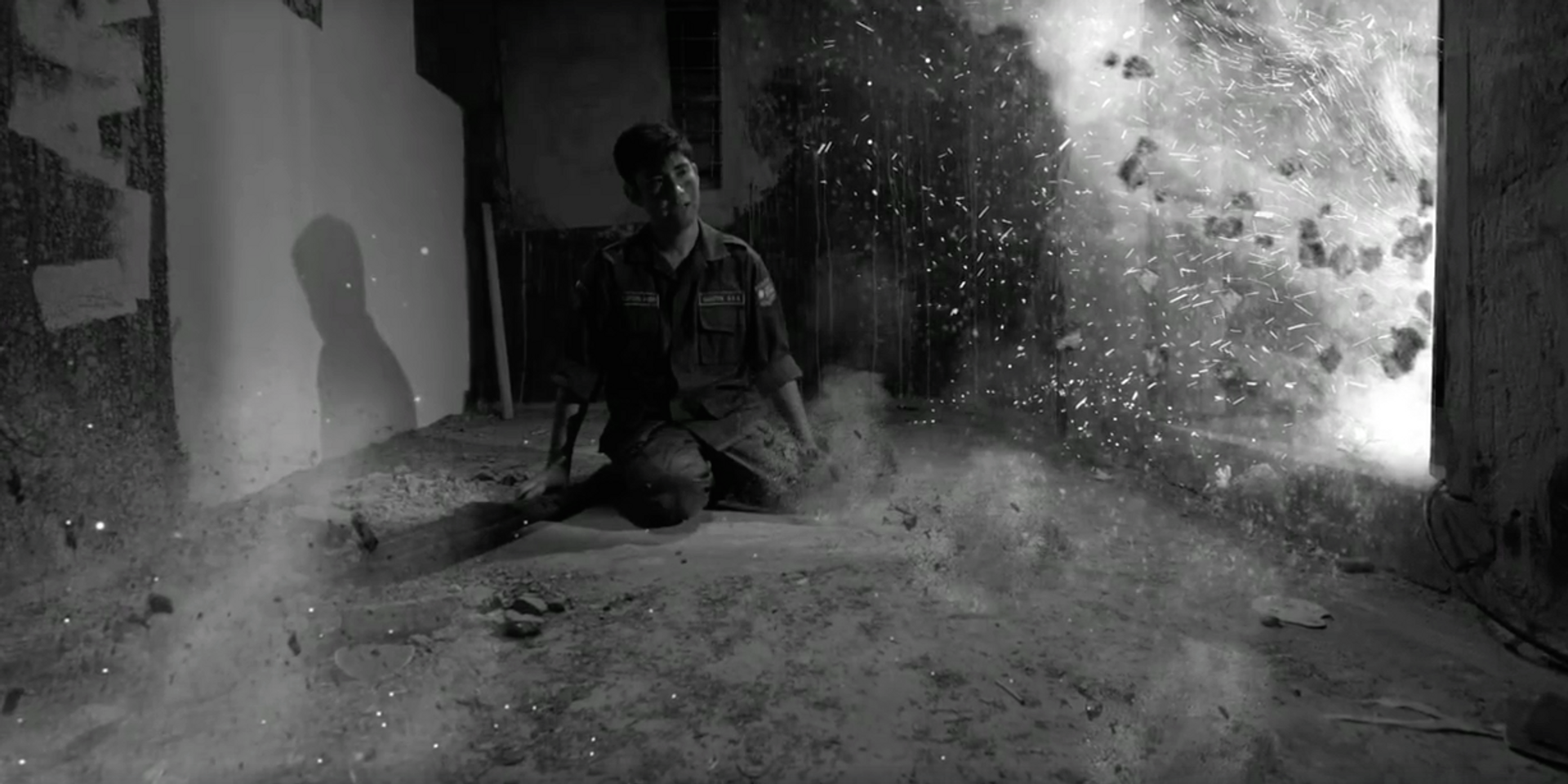 You know those cinematic moments where a heat wave strikes and each frame radiates from the sweltering atmosphere? That's Filipino rapper NINNO's new music video for 'Simmer', but taken to a whole new light.

Done entirely in black-and-white, 'Simmer' turns the "heat wave effect" into something starkly more chilling. The video cuts to scenes featuring summary executions, fallen soldiers, and dead journalists amidst news clippings from the Martial Law era; the excellent use of stillness makes every shot reverberate with sinister beauty. It's an eeriness that should be numbing in its weight, but wakes the senses with unwavering focus instead.

We had a chat with NINNO about 'Simmer', the message it aims to send, and baring himself open to an onslaught of potential backlash with its release—something which he admits to feeling nervous about.

What was the inspiration behind this music video?

A year ago, I actually wrote the song for the SAF 44 and the tragic ending to the Mamasapano clash. I wrote it as a criticism towards the P-Noy administration as well as a reflection on the fragility of life.

When the team first came to me with their concept, it was some sort of “Gangsta’s Life” kind of thing, and I really didn’t like the idea. It was so far removed from what I initially wrote the song about but still wanted to keep it socially relevant for that was what the song was about.

I had always imagined the music video to be me walking through a battlefield and reflecting about how quick life comes and goes. Thankfully, the director Mikey connected with my vision for it and we came up with a concept somewhere in the middle of what I wanted and what he wanted. Our battlefield still existed, only this time within different contexts.

What's the message you hope 'Simmer' will send out to the world?

The message of both the song and the video are really simple. Life passes very quickly. I could be next or you could be next. The chances of a soldier dying today is the same a journalist’s. The truth of the matter is that we really just don’t know when our time is up. I want both the world and the Philippines to wake up to the truth that many choose to ignore. Atrocities are being committed every day, and I just want people to take a minute to process that and acknowledge that we are currently part of a broken system.

So is it a one-time thing, going with a theme like this, or is NINNO fully embracing the socio-political as his brand now?

We noticed, too, that your hoodie has a raised fist on it—any deliberate symbolism or irony there?

You noticed that? Haha, wow—I'm glad someone actually did. I actually asked Anygma for permission before using that hoodie. It was a conscious effort of on my part to take note of everything I was wearing including the shirt inside the hoodie.

Yeah, I suppose there's a form of deliberate irony there. You can't see it because the video is black and white, but it's actually a yellow fist. However, all of this will always be open to interpretation from anyone viewing my work.

Also, if you wanna cop one, it's the UPRISING Hoodie, so shoutouts to one of the dopest independent labels in the country! I'm sure I made my friend BLKD proud with this one.

A yellow fist because of Aquino, or...?

Again, that's open to interpretation. :) Although, just to make it clear--I'm not a fan of any administration.

You mentioned something about being worried about "starting shit" with the video, but you're still determined to release it anyway. Can you expound more on your feelings about that?

There is a very important discussion that all Filipinos need to have. More than any political issue, there's the very basic issue of death. I think it's important to have a proper discourse on how desensitized society has become to violence and murder. I'm not saying I have all the answers, I really don't. I just hope to encourage discourse about topics I feel strongly about.

I didn't attend any rallies this year. Unpopular opinion among my generation, but I didn't think it would solve anything--but that didn't mean I wasn't as outraged as many of my activist friends were. We all have our parts to play; we all have different battles to fight. It just so happens that this is my platform--this is my stage.

You've got a new album in the works. What can we expect there?

It's a concept album that's scheduled to drop late 2017. It's basically the story of a man who goes and sees a psychologist for many of his issues. There are songs about drug addiction, domestic abuse, thoughts of suicide—but there are also more uplifting tracks that talk about overcoming emotional struggle, surrendering to fate, apologies, stuff like that.

Sonically, the album has a darker tone to it, a lot of heavy synths and distorted samples. I think my pen game's a lot stronger on this album too. Like TCK, the whole album (skits included) will be produced and written by me. So far, I've written about 20 new tracks, but I'll probably cut that down to like 11 or 12. So yeah--very exciting stuff.

I'm really excited to be working on that album, but so far my efforts have been split with the Shadow Moses LP as well as promoting Third Culture Kid.