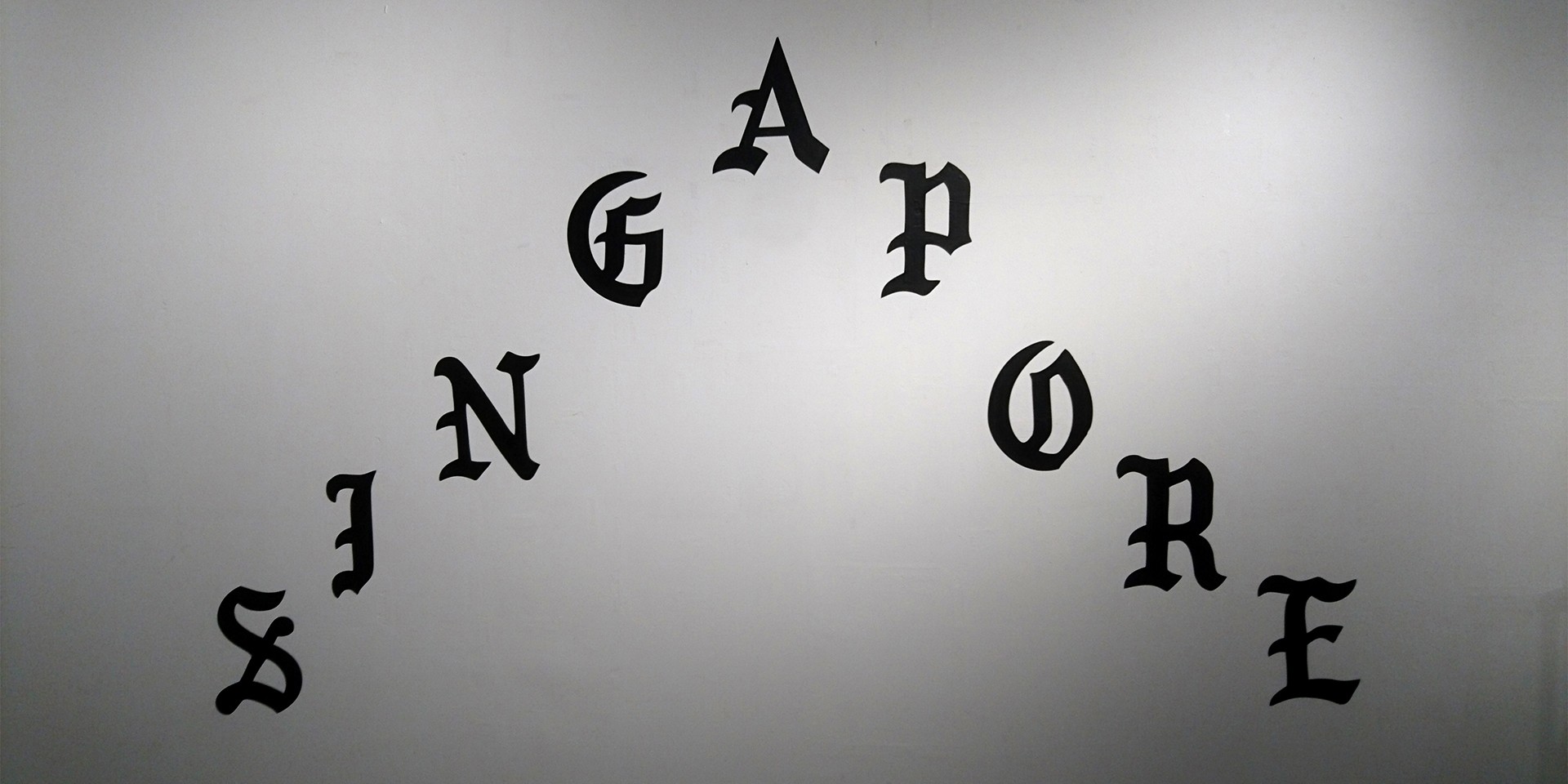 Kanye West may have had his only show in the Philippines this year, but clearly he hasn't forsaken Singapore, and whether this will lead to a local date on his upcoming Saint Pablo tour is up in the air.

One thing's for sure is that there are plenty of Yeezus stans here, and many of them turned up in droves this morning at Suntec City, when it was revealed last night that his pop-up store in Singapore — the only one in Asia — would take place at the long-running shopping mall.

The specific storefront wasn't specified on his official site, but resourceful fans quickly found out that it was being held The Art Space, Suntec's cafe/art space hybrid that obviously fits the minimal aesthetic that every pop-up store he's done has had.

Some fans had already turned up at Suntec at 9.30pm the previous night, and helped to organize the queue to make sure everything would run smoothly once the clock struck 12pm. 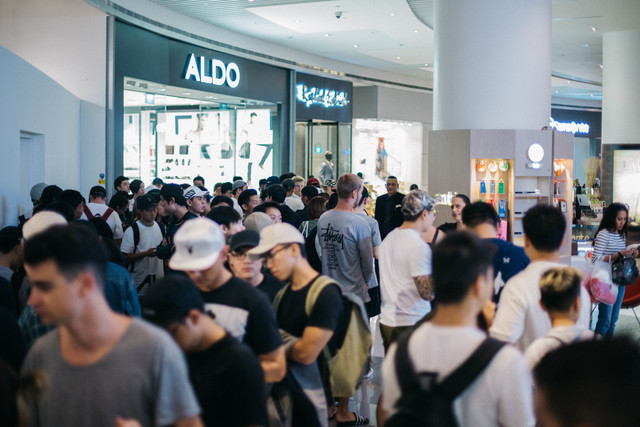 Arriving about half an hour after its official opening, we found ourselves at the tail end of a queue of about 100 fans — mostly keeping to themselves on their phones, playing Pokemon Go or scrolling through Instagram, imagining their own post at the top of the timeline once they grab their own Pablo jacket. The excitement wasn't exactly palpable.

Hell, Frank Ocean had just released his new album by the time we were there, and no one was talking about it. Not one soul was even lip-synching to 'Famous'.

For a wildly spontaneous event, the crowd was fairly restrained, and the loudest people were actually the security guards, restricting the initial queue and directing any additional customers to an overflow queue — which was only a stone's throw away, but also exposed to Singapore's signature unforgiving humidity. Yikes. 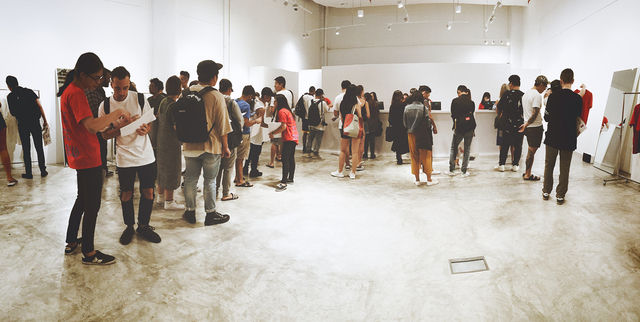 Opening just a few minutes after 12pm, the store stuck to a strict rule of allowing only 25 customers in at a time to minimize clutter.

The store is sparse, as expected, and racks displaying t-shirts were only samples — if you'd like to purchase something, you'd have to get them at the counter itself. Glossy, one-page catalogs were passed around, and it showed everything that was available... well, except for the bomber and military jackets, which were still on their way to the store when we were there at 2pm. 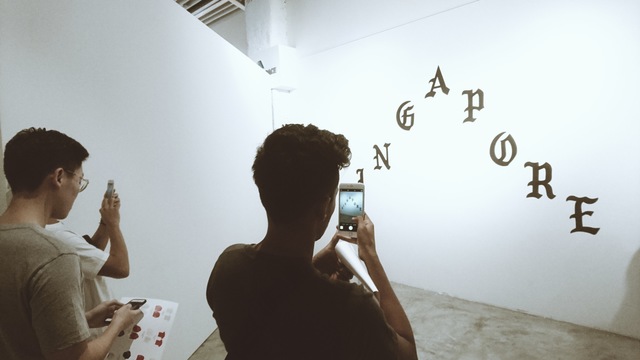 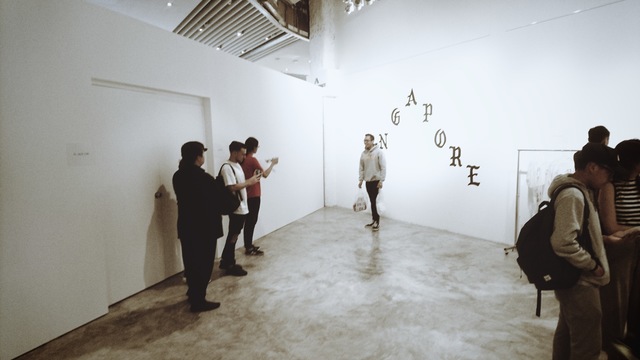 Pictured: customers very excited at seeing our country's named spelled out in a Pablo-styled font. 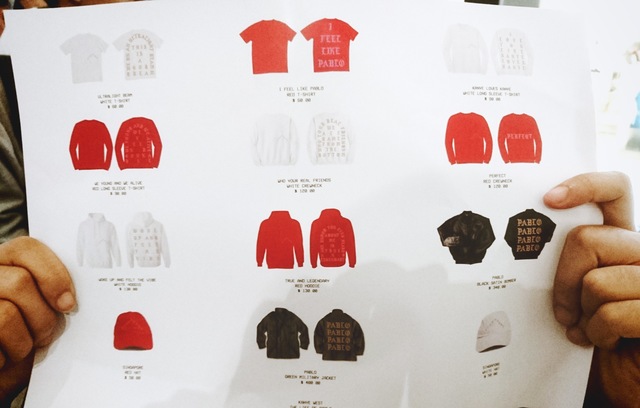 The printed catalog given out to each customer. The white hoodie had already run out of its M size by the time we received this. 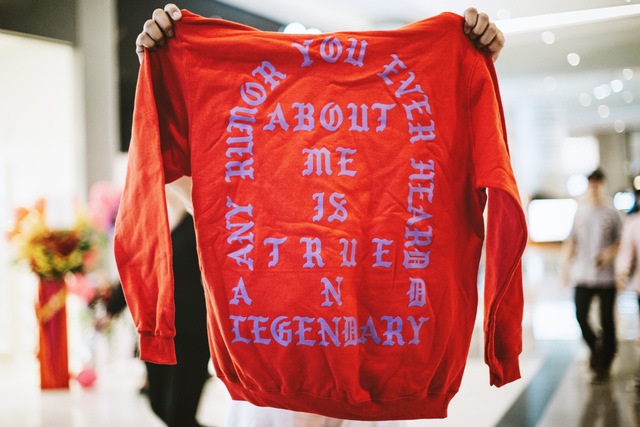 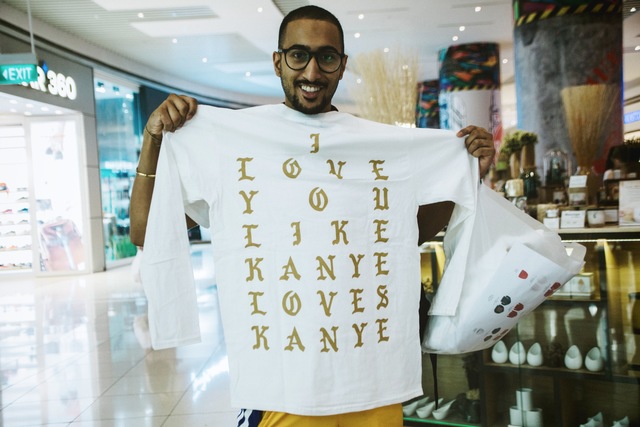 The short- and long-sleeved t-shirts shared the same design template as all of his Pablo-related merch thus far, possessing gothic typography and striking colours — no portrait photos, no album art, just words lifted out of 'Ultralight Beam' and other songs from The Life of Pablo. 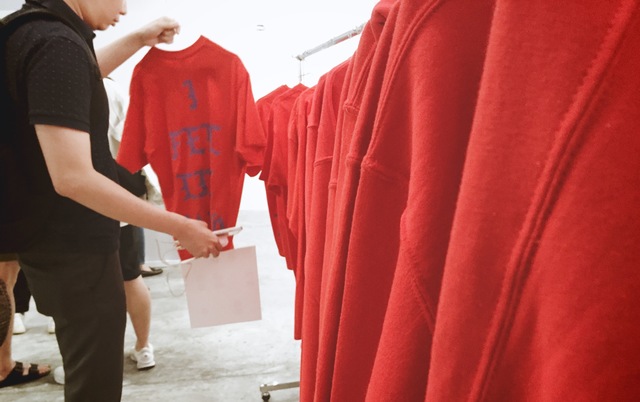 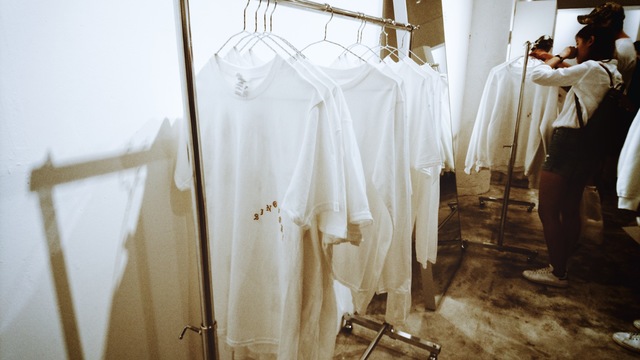 His t-shirts have been the target point of public derision, as is everything he does in general really, so the store is obviously not worth the long wait unless you're a big fan. Just t-shirts and hoodies, with lyrics from 'Ultralight Beam', 'Famous' and 'Freestyle 2' printed stylistically, but the difference is that Singapore's name is printed on the front.

The only colours available are white and red (a possible nod to our flag, maybe?), and as a bonus, there are also caps with Singapore's name emblazoned for a cool SG$50 — a pricey, but obviously superior, substitute for tacky National Day caps. 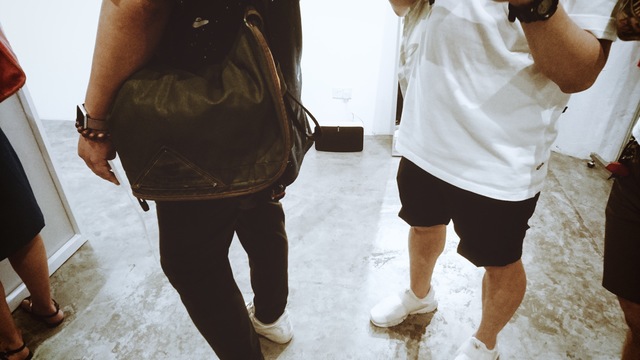 Two Sonos speakers were all it took to power the store with music, blaring the entire The Life Of Pablo album on rotation.

If you're a Kanye fan and you'd like to shell out SG$60 for a minimal t-shirt, then this certainly beats having to bid furiously on eBay and paying extra for shipping charges and inflated prices. The hour-long wait is certainly worth it if you have SG$400 to spare for a jacket you probably can't wear outside in Singapore. But hey, at least it'll look nice hanging in your wardrobe.

We thought it would be fun to talk to some of the people who queued up early, and how they felt spending hundreds on merchandise they just found out about the day before. 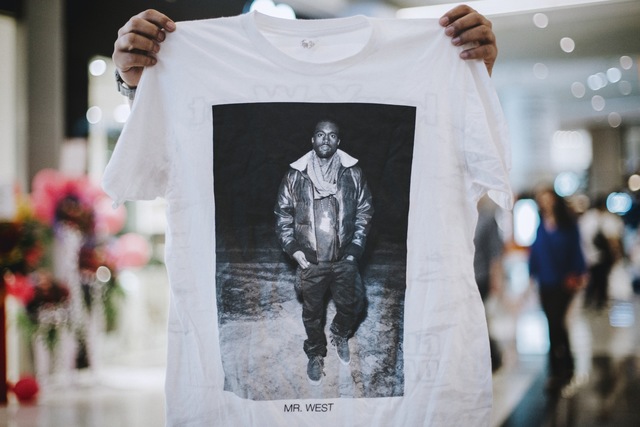 We found this man dashing out of the store, hurrying to go pick up his child after spending an hour picking through the catalog. Despite carrying bags of new Pablo merch, he was mostly eager to show off a rare t-shirt he grabbed at Kanye West's first show in Singapore, back in 2008. He was also wearing a t-shirt featuring faded art from Kanye's 2010 opus, My Beautiful Dark Twisted Fantasy. "People were questioning if this is even authentic," he scoffs.

He's well aware of the cheap origins of his newly acquired Pablo t-shirts, but he isn't fazed the slightest. "This shit was probably screened in Singapore. It's just Gildan t-shirts," he says. "I'll still give my money to Kanye though." 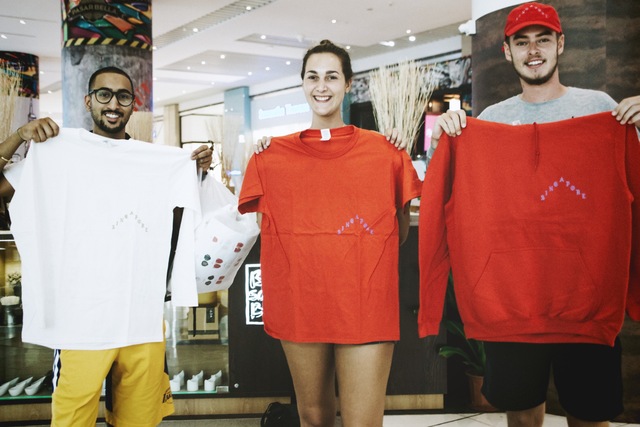 Ricky (left), a university student with a day off, spent "SG$1,032, or something like that", while Alex (right) and Robyn (centre), both on holiday, had only found out about the store a few hours prior, reaching as fast as they could to queue at about 10am. "We're already leaving tomorrow, so this was perfect for us. We've never been to a Kanye pop-up before." 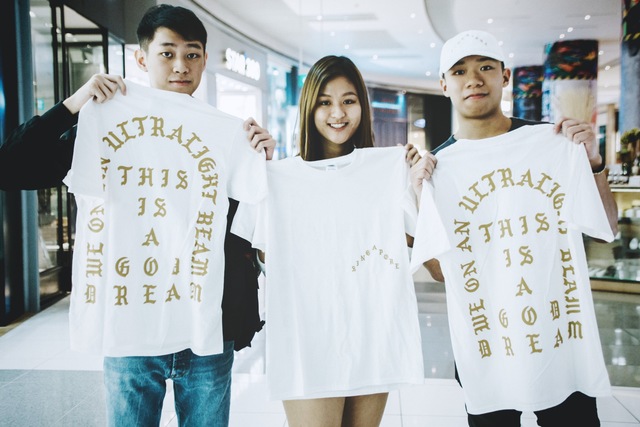 "I actually have to study. I'm supposed to be studying now," Hong Long (right) mentions, laughing, adding that his exam is coming up on Monday. They considered selling off their merch after buying them, but with the store running through the weekend, they surmised that the store would have enough stock for everyone. 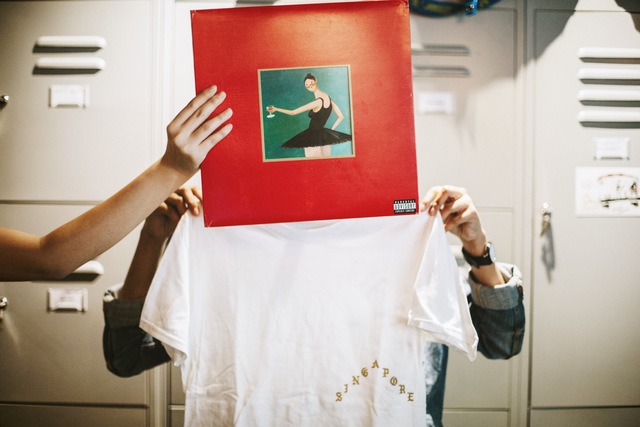 Our resident chief designer, she relented and bought an Ultralight Beam t-shirt despite swearing off buying anything while queuing up. “I bet all those young punks earlier didn't know his albums before My Beautiful Dark Twisted Fantasy.”

Kanye West's The Life Of Pablo pop-up store will run through the weekend at Suntec City's The Art Space, located at Tower 1, from 12pm - 8pm. While stocks last.