Fifteen years after breaking into the pop punk scene as the first band who showed off their chops with a violinist in their line up, Yellowcard hits back with their first ever concert in Singapore after their shock respite in ‘08. It seems very much a surprise, why now after all these years? But not like any of the 2,000 at Hard Rock Coliseum were up in arms. The band were no fan of time wasting with the old timers delivering an opening so explosive it made the venue echo which the fans will later learn was what made the night so memorable.

Yellowcard started with ‘Awakening’, fast pumping and not missing a beat playing through their repertoire of songs which extended to ‘Rough Landing Holly’ and ‘Breathing’, all sides were covered and violinist Sean Mackin even had the confidence to work a flip, a nine in my scoring standards, off a drum platform onto a wave of cheers and shouts. 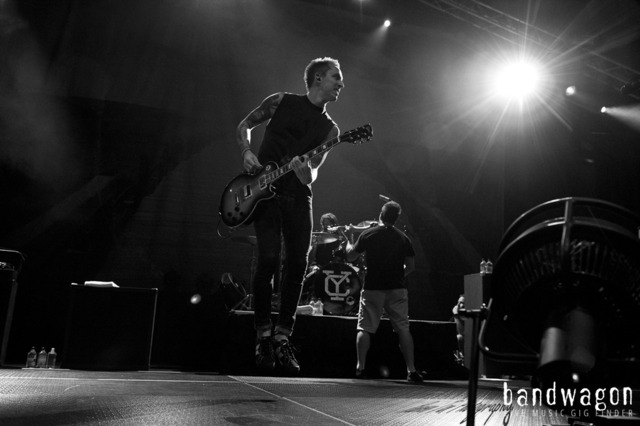 Right before scrolling through their latest hits from both ‘Southern Air’ and ‘When You’re Through Thinking Say Yes’, a half-teasing lead singer Ryan Key worked at segregating the crowd, "We're going to play a song off Paper Walls, if you know this song, you're a hardcore Yellowcard fan." The response was an unequivocal yeah as the band tore through ‘Shrink the World.’ It’s such additions that made the night downright faultless for the long-serving die-hard Yellowcard fan and also appealing for the casual listener from start to finish.

When fans all over the world first heard word about their combined decision on an indefinite hiatus, we thought Paper Walls would be their last creation to tide us through hard times but after their two years hiatus to work off their individual projects, we were rewarded with ‘When You’re Through Thinking Say Yes.’ It however came as a price as the band has mellowed in their return, their brand of pop punk carried forward from their efforts as teenagers would resound as slightly strange to some degree if the middle-aged rockers were to stick with their age-old formula.

But if you were wondering if their new record sounded like it lacked a certain sense of substance, you should be ashamed now for you could see they have swapped their teenage problems for lyrical exquisiteness and more emphasis on Ryan Key’s tender side onstage. 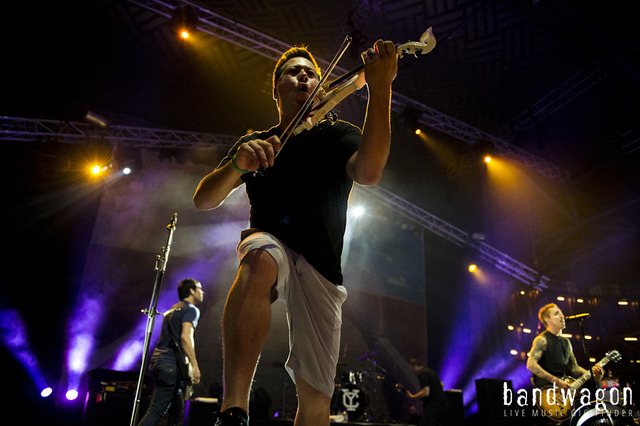 Regardless of the circle pit that fell flat during ‘Five Becomes Four’ due to safety reasons, it was quite apparent that the band had done their homework, as they were excellent in weaving both light and heavy songs into the set list. Midway 'Sing For Me', a song written about Ryan’s aunt Stephanie who passed away last October from brain cancer, stood straight out in the mix with its catchy tune and transcendental emotional baggage, and when placed together with the band’s fast paced songs, they managed to successfully bring out the matchless experience of being in attendance of a Yellowcard show.

"The thing about it is if you sing louder the better she can hear you."

The night was also about schmaltz and hits, their encore an impressive end to the night which puts them back in the front seat with 'Here I Am Alive', crowd-favorite ‘Light up the Sky’ and 'Ocean Avenue', the song which imploded onto track listings of every 90s kid.

When the lights dimmed once again, you could tell that the night into the past was about to be over as the masses struggled to compose themselves from jerking into tears. Would it be another 15 years before we see Yellowcard again? Only time will tell.