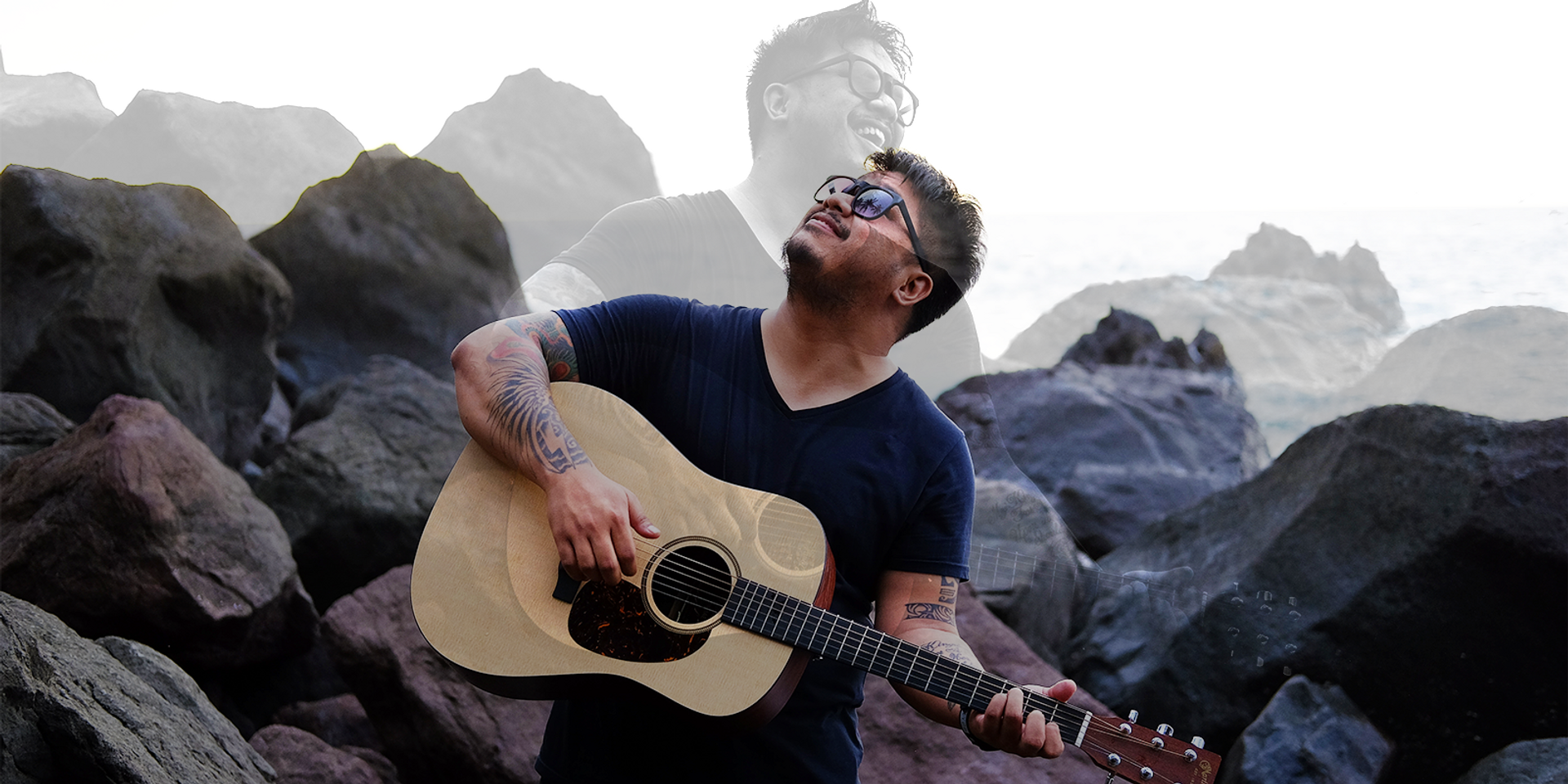 It has been three whole years. Now, Carlos Castaño is back with a new song.

'WHY/WHYNOT,' the first single off his upcoming album Scratch, is his first new material since 2013's The End. The track made itself known on Facebook a few days ago through a lyric video produced by his new studio, aptly named Colorful Music.

Take in the bustling streets of Singapore while you digest the rousing words from the track below:

But if you think the video has already (and quite literally) turned your world upside down, think again: Carlos claims to leave the meaning of the song to our imagination!

Fans and friends need not fret, though. Since it's been years since we heard from Carlos (and yes, he didn't really want to tell us what the song was REALLY about), we decided to have a conversation with him instead about WHY/WHYNOT some things are. 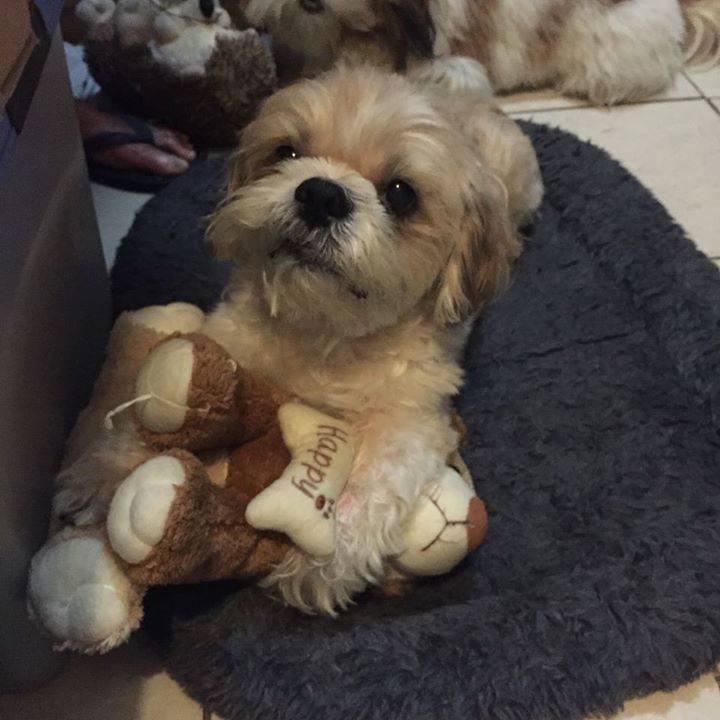 My best friend, Troy. He passed away already.

I love dogs. I don't think life should be lived without dogs-- there's just something about their kind of love. Like that saying-- "be the person your dog thinks you are." And ever since recently, I'm trying to be.

Life should be a musical. Aldus Santos of The Purplechickens and I have imagined a scenario wherein daily life, the mundane to the spectacular, are all sung. It'd be fabulous.

It's OK. I'll eat anything on a pizza. I know there's some big war being waged over this polarizing topic...but meh, it goes in mah belly.

It depends. If I'm dressed for it, or indoors/in bed, if I have a guitar, or if we're at the beach or playing football. So yeah, it depends.

Yes. I'll always try anything and everything once. If I loved it, I'll do it again. If not, I'll do it one more time and then decide. Last year I was able to do a sort-of-bungee thing in Bukidnon-- they strap you to a machine and you walk off a tower, the machine thing then catches you before you hit the ground; yes, I did scream like Oprah.

I've already done it. I lived in Davao for about 5 or 6 years and I got my diving license there-- one time, we had a friend disappear from a dive and we had to "chum" the water to attract the sharks, his family wanted to bury something, anything. So yeah, sharks. To be clear though, he wasn't attacked, we had figured that the sharks...uh...took him after he passed.

I've done it. I'm Mindanao-bred so a LOT of things happen when you climb mountains (I've climbed Apo), go on trails, and quite inanely-- get drunk and yell at each other: "DARE?! DARE! DARE?" 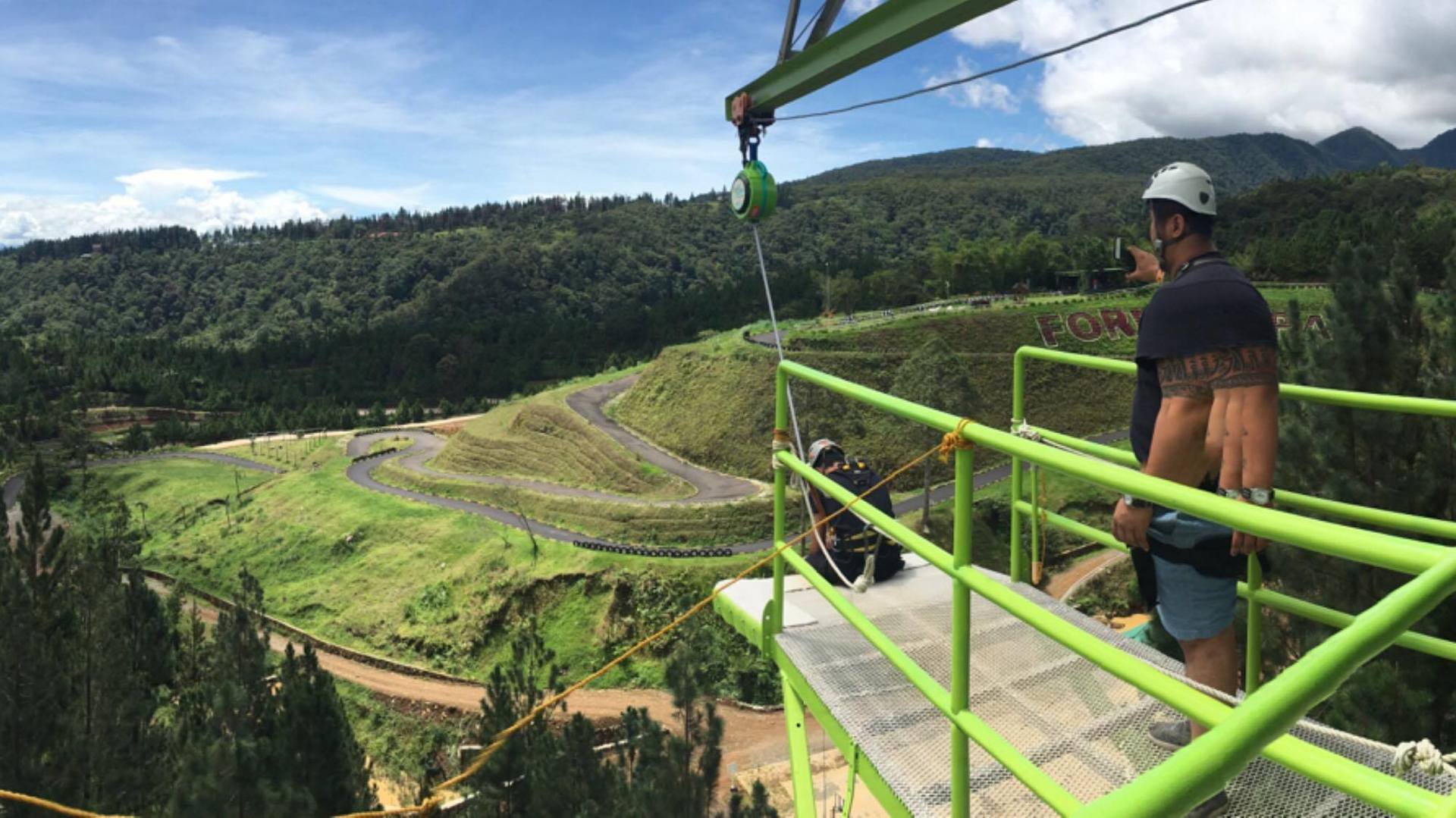 tried learning a musical instrument different from the ones you already know how to play?

Yes, I still do. I recently acquired an electronic drum set from JB and I practice about 4 times a week. Michael (Gemina) would always teach me or show me fills and grooves when we're on tour and I'd make mental notes of it to try out later. Of course I can't do it like he does, he's amazing, but I get by. 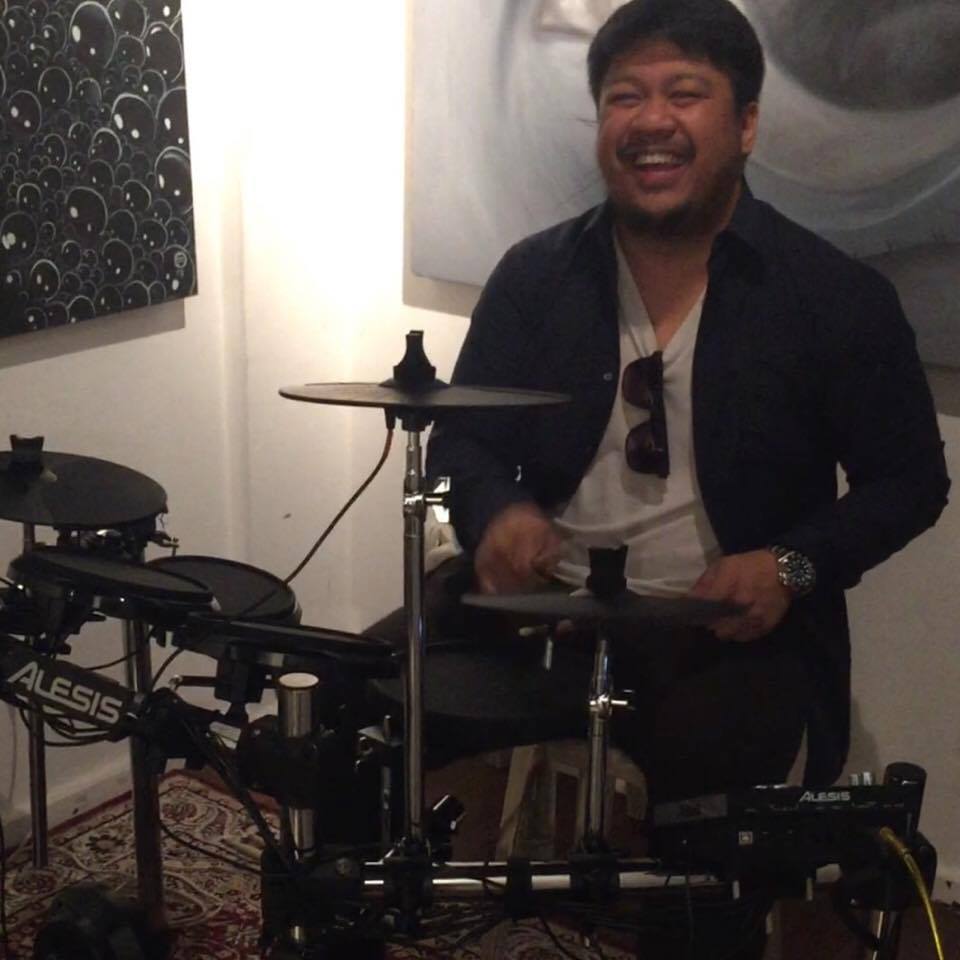 I also very recently tried teaching myself how to play an accordion. I'm very proud to say that I am getting very bad at it. I'd like to play the saxophone as well-- one time in Guijo after a long day at work, I heard a sax across the street and there was a woman playing it, by herself, in SaGuijo's area and so I asked if I could sit down and listen, she obliged. Turns out she was Nicole Tejedor, an amazing saxophone player, and she was there for rehearsals with The Espasouls.

I'm addicted to learning and getting things right, this time around. There's always something to do better.

dated someone who lived in a different timezone?

Yes but let's not talk about that one. I AM currently in a relationship with a doctor...so that's kind of like dating someone in a different timezone (?) Yes? That counts. Let's just say it does. (We have friends who are doctors. We say it counts.)

written a song about a former lover?

The first three albums (which you can listen to AND download ALL for free here at www.carloscastanomusic.com) are all about past lovers. Pick a song and I'll tell you who it's about. Just kidding. *wink wink*

For one night only, would you rather play at the Araneta Coliseum to a crowd of 20,000 fans or perform at Saguijo to an audience of one person who is clueless about your music?

Araneta. Who wouldn't want to play in front of 20,000 people? I've played so many (too many) empty bars and cafes, it's nice to play to a crowd. My two most memorable performances were to crowds: one in Hong Kong at an underground music hall called Beating Heart-- the lighting system had to be reset so we paused our set but I got antsy and decided to launch into John Mayer's "I'm Gonna Find Another You" and Michael being Michael (Gemina), he lead the band into it and the entire room started slow dancing. It was lovely. 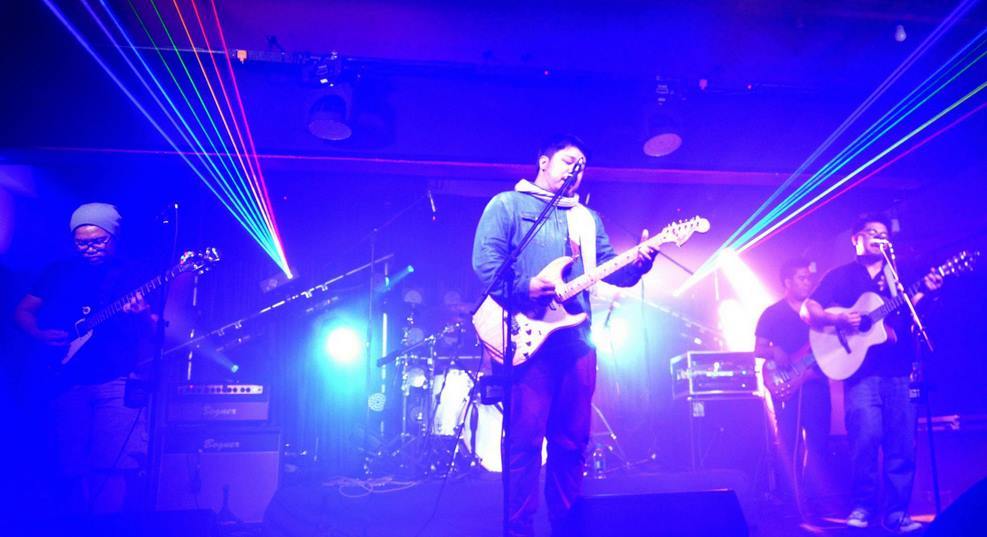 The second one was the third day of our Formula One Singapore experience, we were right across the field from Robbie Williams' stage and of course EVERYONE was there to watch him but I can tell you, we didn't waste that opportunity. We played our hearts out that night. (pretty cool too coz when we were into our last song, "Bright Yellow", Cirque came out with massive balloons and people on stilts-- surreal) 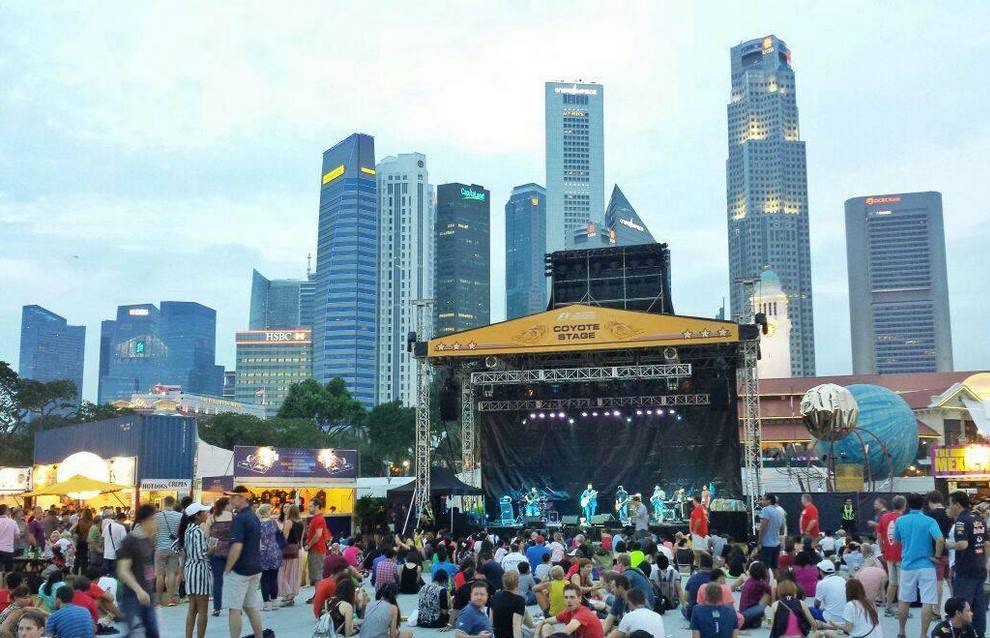 music and art as politics?

Yes and no. Everyone calls it politics-- gossip, fights, even performance schedules and/or time slots. To a point, we can liken it to politics I guess, but I'd like to think that we're not politicians, artists are too emotional for real politics. I think it's more "being human" than anything and well, that's OK. It's all part of it. I did learn my lesson though and right now I just choose to enjoy everything, every part of it. There's no need to participate in the hate when your heart is so full of love...naks. True though. What's great though is that I already made my "big mistake" and I learned from it, forgave, let go, and now that I can move forward-- I'm so old that I can just be the "old dude" and enjoy my whiskey.

move to another country if it means your music will be heard more by other people?

Not right now, I love the Philippines so much it hurts. I don't think moving for my own reasons would be the best thing right now, especially now that our country is so addicted to hate...I'd like to, without being too political, I'd like to be one of the ones that stand up and just try harder to love. You don't run out of a burning house without making sure everyone is gonna make it out too.

write a song about your political views?

I have. But that's for my alter ego hip-hop project Siviljen (pronounced Civilian) which I'm still working on for the past 3 years. Hip-hop, with its roots being deep in socio-political situations, themes, and scenarios, lends itself more to that, more than anything else. But maybe not for my pop stuff, that's something I want to keep in its current sphere: lovey-dovey fruity-tootie stuff.

record an album with another artist, as a collaboration?

I'd love to, I already have a list. Shad from Toronto, Adam Shah and The Lion City Boy from Singapore, Timmy Gunn and the rest of Shotgun Politics from Hong Kong...hmmm. A lot. I'd love to do a folk record with Inch Chua, just microphones in a room, that'd be amazing. Locally, I would KILL to play guitar on a Skarm track, that guy is on fire right now. Very recently, Isa of Fools & Foes floated the idea of doing an Oh Wonder kind of duo, so yeah, there's a lot-- I'd love to do a punk record ala Rufio with Jason Caballa of Pedicab/Cheats and have Ryan Tabag of The Riot Act on drums. It'd be cool to do something, anything with Basi of Run Dorothy, that guy is just wildly talented. A lot to learn, to experience really. This time, with better eyes.