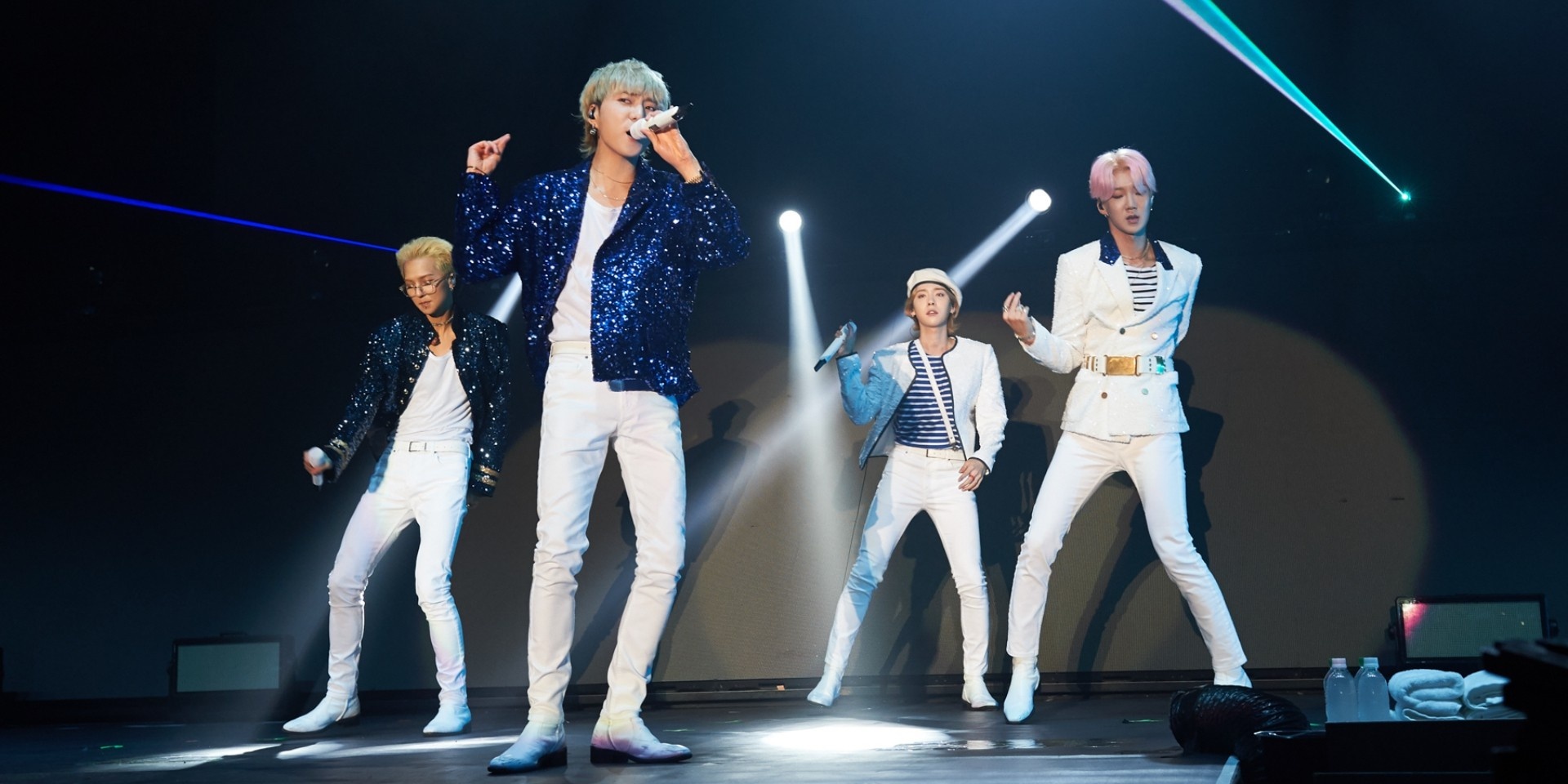 Formed in 2013 through reality survival program WIN: Who is Next, the group debuted a year later with five members- Taehyun, Jinwoo, Seung-hoon, Mino and Seung-yoon. In 2016, Taehyun left the group, leaving WINNER a quartet. 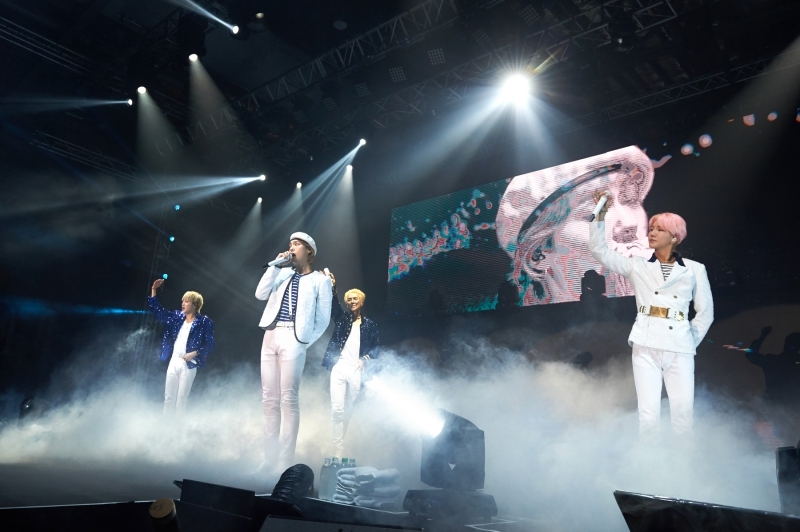 Since this was the group’s first solo concert in Singapore since the YG Family 2014 Galaxy Tour: Power in Singapore, Singaporean Inner Circles (name of their fans) were ecstatic to meet the boys. As soon as the lights dimmed, the arena turned into a sea of sapphire as fans waved their lightsticks.

Kicking off the concert with their debut single ‘Empty’ and upbeat track ‘AIR’, members Seung-yoon and Mino appeared in glittering blue jackets while Seung-hoon and Jinwoo kept it simple in white. I was personally blown away by Seung-yoon’s husky voice as he hit the high notes and Mino’s charisma as he delivered his rap with confidence. 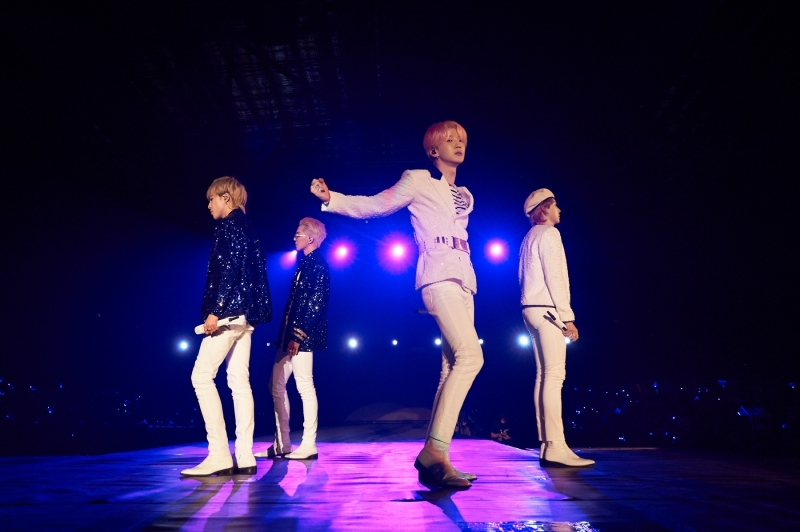 Once the songs were over, the boys quickly greeted their Inner Circles who waited almost 4 years for their return to Singapore. Seung-hoon even said that he nicknamed Singaporean Inner Circles as “Singer Circles”, earning a roar of laughter. Hyping the crowd, leader Seung-yoon shouted: “I know you waited a lot. I can’t wait to show you our performances. I hope you love it! Are you ready?” 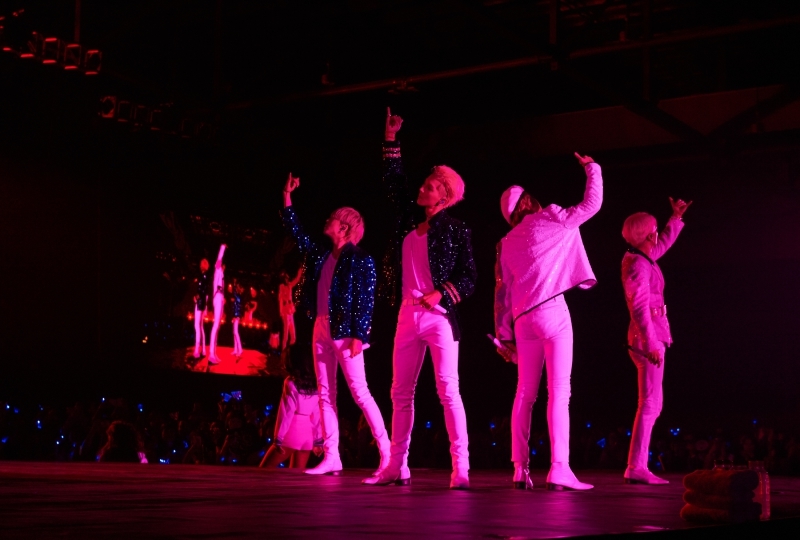 Next, the gents performed ‘Hello’ and ‘Everyday’ from their latest album Everyday released this April. Unlike traditional K-pop groups, which usually incorporate sharp and intense choreography in their songs, WINNER cruised around the stage leisurely to meet their fans. Despite the lack of dance breaks in their songs, WINNER got everyone dancing to the trendy and easy “shoot dance” which gained Internet popularity after being featured on BlocBoy JB’s “Shoot”. 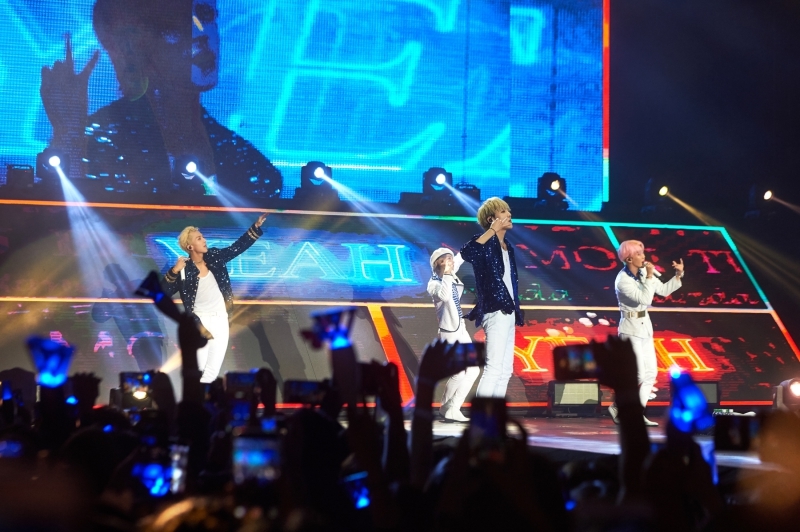 Following that, the boys cheekily shared that they titled the tour “EVERYWHERE” after their desire to be everywhere with their Inner Circles. While in Singapore, the boys tried butter crab, went swimming, and tried to ride the Singapore Flyer which closed by the time they arrived.

The highlight had to be the members’ solo stages where they showcased their individual charms and talents. 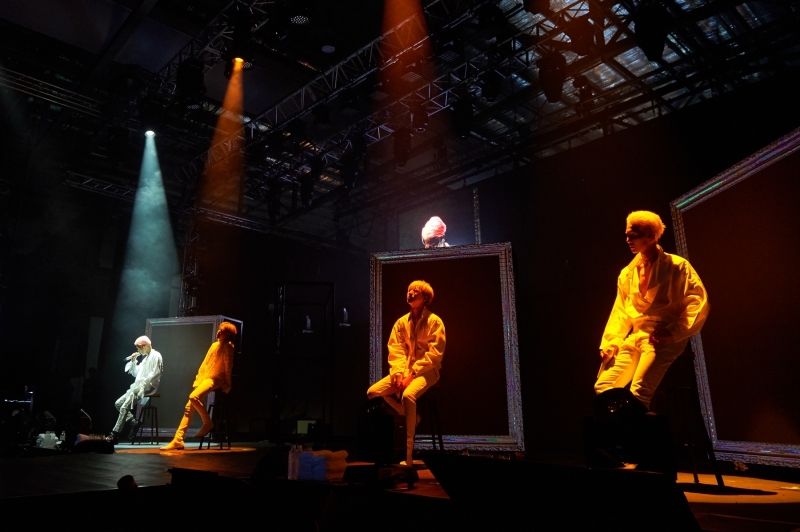 Donning a leopard print jacket and with his blonde hair slicked back, rapper Mino turned up the heat in his sensual single ‘BODY’ and ‘Turn Off The Light’. Accompanied by red beams of light and backup dancers in black latex outfits, Mino also gave fans a look at his sculpted abs.

Next, Jinwoo proved that he is more than a handsome face during his sentimental cover of G-Dragon’s ‘Untitled, 2014’. Expressing painful heartbreak, he instantly transformed the atmosphere to an emotional one, which got fans swooning to his voice.

Known for his deep husky voice, leader Seung-yoon took to the stage with ‘It Rains’. The 24-year-old, who participated in the 2010 reality television singing contest Superstar K2 and finished in fourth place, also gave fans a listen of his cover of Troye Sivan’s ‘YOUTH’ before jamming to ‘Instinctively’ which he sang in the contest. Last but not least, Seung-hoon performed a jaw-dropping cover of Taeyang ‘RINGA LINGA’, showing off his singing, rap and dancing skills. 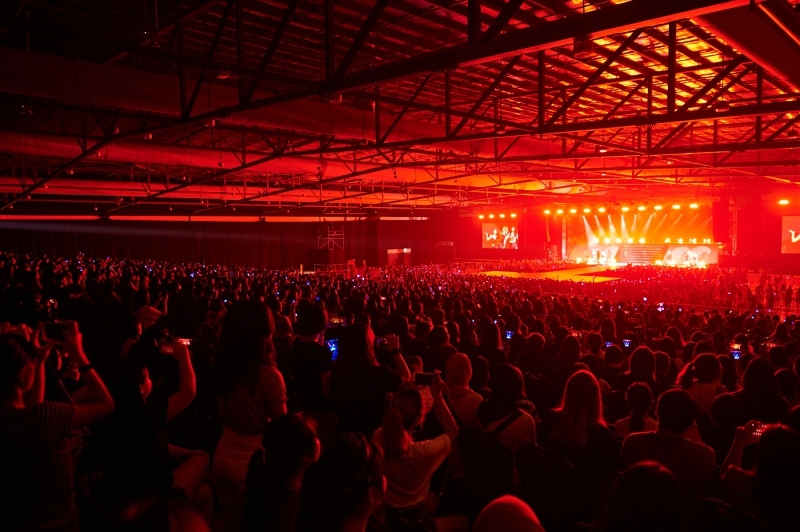 Wrapping things up with ‘LA LA’, ‘Don’t Flirt’, ‘REALLY REALLY’, Seung-yoon expressed his thanks to the Inner Circles, saying: “Singers cannot exist without listeners. Thank you for your support always. It’s my happiest day today. Please look forward to our new album.” From sexy to emotional to cute, WINNER proved to be a truly versatile K-pop act that isn’t bound to one music genre or  performance style. We cannot wait to hear what they have in store for its next album.

Special thanks to UnUsUaL Entertainment for the invite.