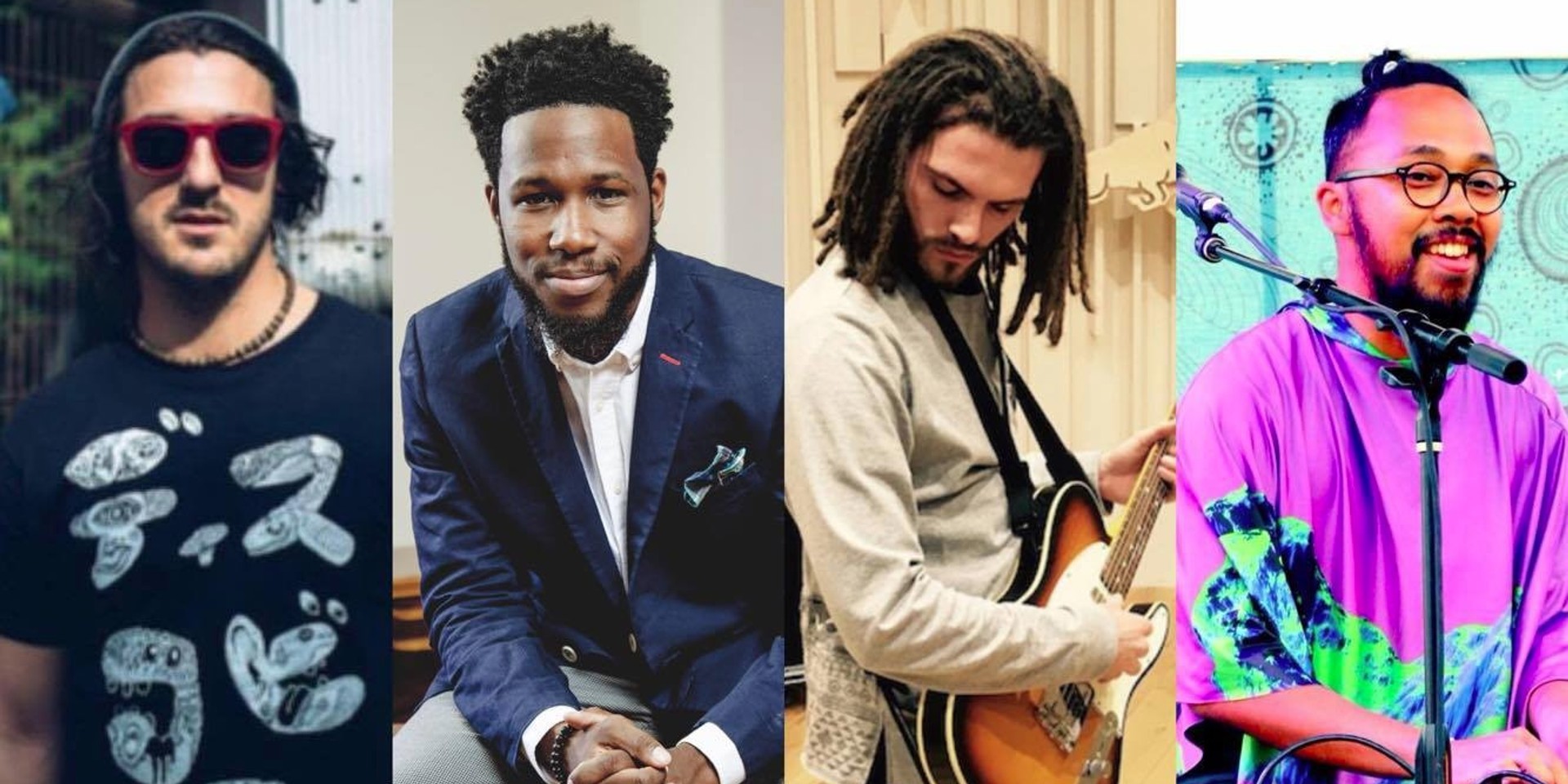 May is almost ending and many have bid goodbye to this year's scorching summer, but it looks like the country's last frontier is not ready to let go just yet.

Lio Beach Festival is happening on June 9 to 11 at the Lio Tourism Estate. Promoting music and arts for the environment, the first-ever beach festival in El Nido promises the perfect mix of nature, beats, rhythm and chill.

The venue is already undeniably breathtaking, but there are also a lot of many beautiful things to say about this festival's lineup. The many different artists that you'd witness at the said festival are sure to create an interesting mixtape while strolling along the pristine beach. Here are ten acts (in no particular order) that are bound to make your long weekend this June the best farewell to summer you can ever have:

1. Cory Henry and the Funk Apostles

Don’t miss them if you’re into: Funk jazz

Get ready for some modern jazz and funk fusion as Cory Henry (of Snarky Puppy fame) and the Funk Apostles bring their synths and their style on the Lio stage. Watch how this ensemble creates beauty using a pretty cool keyboard and two (two!) drum sets, among many other things:

Don’t miss them if you’re into: Jazz

If you agree with us and think that Snarky Puppy is best in show, then you're in for a treat. This trio will have you in awe with their "100% improvised music. No tunes, zero material to fall back on; just ears, adrenaline, focus [and] being in the moment." Sample their genius below:

Don’t miss him if you’re into: Electronic music

With his amazing talent on the microphone, the electric guitar and the saxophone, this Paris-based electronic producer is somebody worth staying up for 'til midnight and even beyond. Close your eyes and imagine yourself as you slow down to something like this:

Don’t miss her if you’re into: Soul

We've known and loved her wispy, ethereal voice as June Marieezy. As (((O))), she sounds different, but the elements of the singer-songwriter remain evident in her music, making her fresh and familiar at the same time. Know what to expect by watching this video below:

Don’t miss him if you’re into: Electronic music

His playful beats (read: J-pop, and Nintendo, maybe) are enough to get you on up your feet and dancing. The Los Angeles-based producer/DJ returns to the country to bring "a positively charged and energetic live set" for everyone. Check out his new short film here:

Don’t miss them if you’re into: Percussions

If Mark Redito failed to get you on your feet, then the Hernandez Bros. surely wouldn't. This PsychoTropical duo is armed with an array of percussions to keep you moving, moving, moving. Listen to their trifecta of the drums, maracas and bongos (and maybe catch a dance move or two, too) below:

Don’t miss them if you’re into: Electronic music

With him hopping aboard the Bandwagon Riverboat and joining us at the Bandwagon Music Market last year, we are definitely no longer strangers to crwn's music. Learn a bit more beyond this beatmaker's music:

Don’t miss them if you’re into: Funk

Stellar performances in many gigs and festivals. A two-month old music video with over ten thousand views (and that’s only on YouTube). Their main man killed and made alive again last February. A band like theirs needs no introduction. Watch how we’re all better off with Apartel at our first Lio adventure:

Don’t miss them if you’re into: World music

Go back to your roots and and embrace the sound of traditional instruments and ethnic beats. Let the tribal rhythms from this band lift you up and make you realize that under the bright moonlight by the sea, we are all alike after all.

Don’t miss them if you’re into: Reggae

No beach festival is complete without a little bit of reggae and island music. Whet your appetite for the natural beauty that you are yet to behold while listening to what their old man has to say about life below: 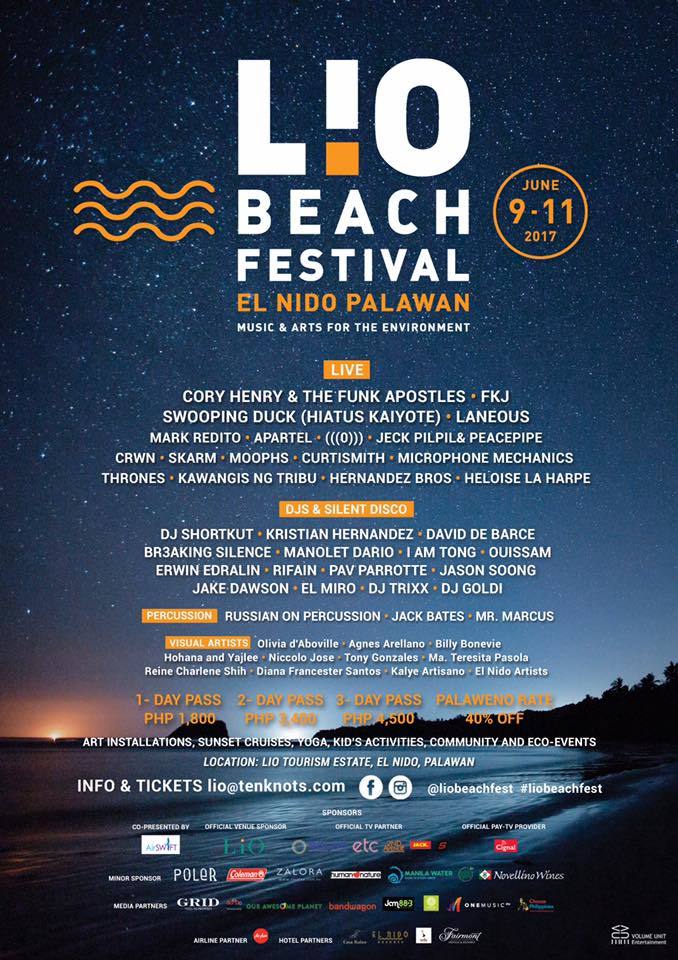 Check out the set times here: 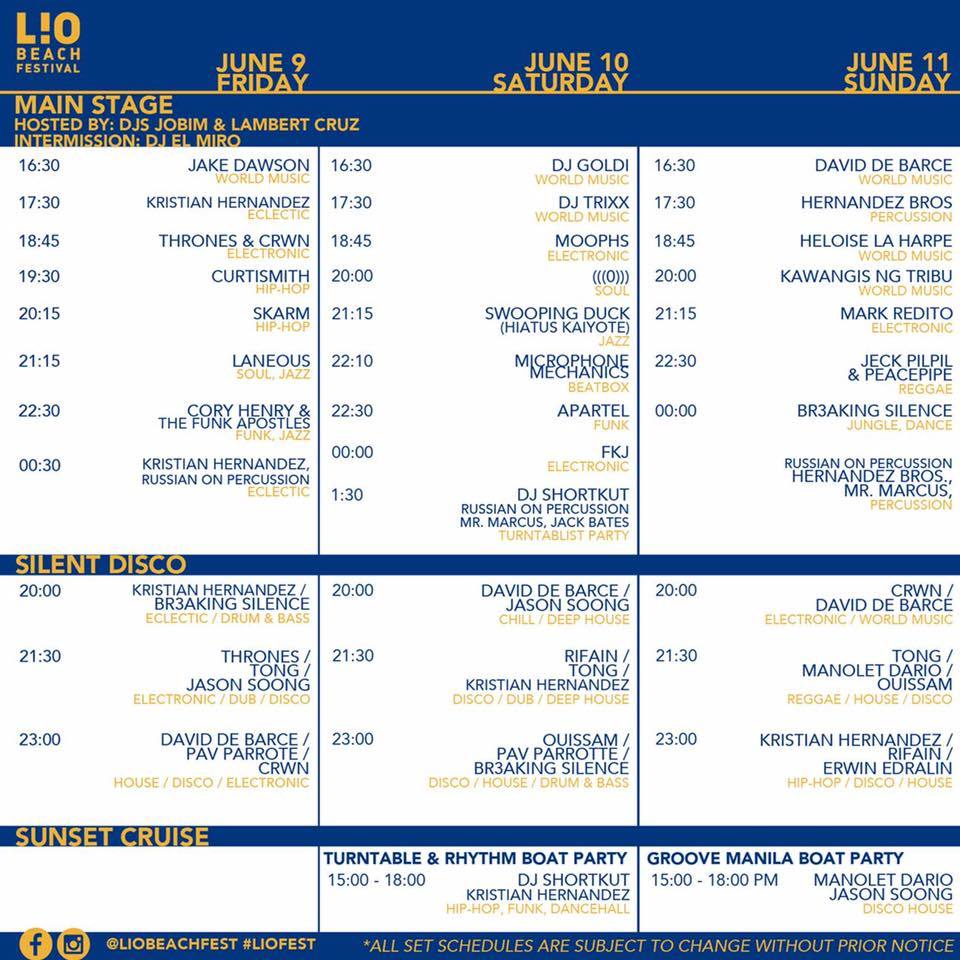