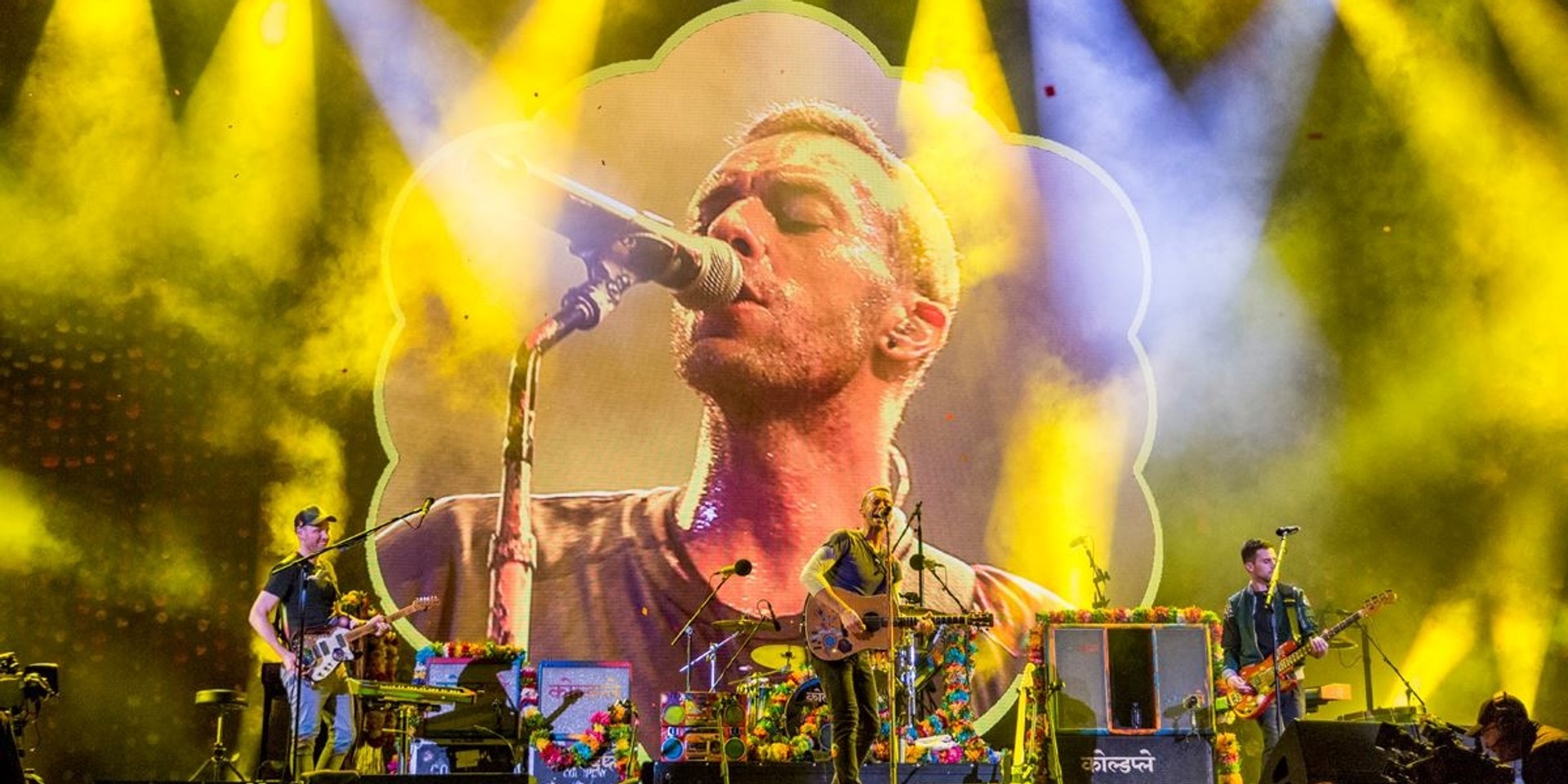 Coldplay is almost always on every concertgoer’s bucket list. They have been at top of mine for as long as I can remember.

Over the years, dozens of imaginary Coldplay Live in Manila concert posters have been released (that says a lot about how desperate Filipinos are to have them over), fluctuating my feelings from hope to dismay, one hoax after another. I eventually just stopped hoping altogether. I roll my eyes. Not again. It’s never real.

READ: Coldplay adds the Philippines to their A Head Full of Dreams Tour

With VIP tickets priced as high as Php 22,500, I imagine the producers laughing like villains do, intentionally wanting to see you deep in agony as they step on and crush your dreams — unless you’re loaded or willing to sell a kidney. And I wasn’t either. I remember having a conversation with a friend a month before the concert about how willing we were to fly out of the country and see the show, should the Philippine producers rip us off. The hopes came back.

Singapore was my easiest bet. On the rainy morning of November 25th, I readied myself for the battle of online ticket selling highly confident of success within an hour. After all, this was already for the second concert day; it shouldn't be a problem.

Four hours, an unstable internet connection, a lot of sweat, tears, and tension in a virtual waiting room… I got nothing.

The fluctuation of feelings from hope to dismay was back again, now even more painful because this ain’t just about fake posters anymore. It’s the real deal. We’re talking about A. Real. Coldplay. Concert. Here.

I had to shelf my Coldplay dreams. The odds were just not working for me, I thought. Someday, but not today. I went on with my life miserably, (Of course I’m kidding. Maybe.)

A day after that frustrating bout for Singapore tickets, this appeared on my Facebook feed.

The Abu Dhabi New Year’s eve concert announcement was nothing short of a miracle. Call it magic, call it true. My mom asked me to go with her to UAE for the New Year’s season, to which I already said yes to. This was a random and late addition to the tour – only a month before the show – and there is no way I would say no to this.

Back in the battlegrounds of online ticket selling, on November 30, at 4pm sharp, I was recharged and ready battle again. Unlike Singapore that took four hours of waiting in vain, Abu Dhabi’s was short and quick.

At 4:06 pm, Golden Circle and VIP tickets were sold out. A friend told me she had extra General Admission tickets, but I’ve since made a promise to myself that for Coldplay, it’s front and center or nothing. So, nope. All bets were off yet again. I was bummed but alright. I’ve managed expectations this time. I got used to the "almost-but-not-quite" experiences with Coldplay.

On the evening of December 14, though, I received floods of messages in a group chat.

My friends went to see Coldplay in Sydney and our group got first-hand accounts of the experience. A series of bulleted messages and a solidly profound commentary came next. At this point, my hands started getting cold and my heart throbbed hard. The messages were compelling enough to think it through. My good friend told me patience is overrated anyway. I’ve got to experience this as soon as possible.

I booked the only available gen-ad ticket. Three weeks length of a cops and robbers game with Coldplay and I finally caught it. Score.

I typically withhold all expectations for every concert I go to. But after the hype and all the emotional hullabaloos I'd went through, I kept it high and up. My entitlement wasn’t necessary but very much present. After all, I knew what to expect, exactly.

I made a Coldplay playlist on Spotify based on their usual concert setlist and decided to play it on the coaster from Dubai to Abu Dhabi — 21 tracks, clocking at a total of an hour and 40 minutes. Coincidentally, the last track finished playing the moment we reached Yas Island.

Entering the venue, they gave away wrist gears of different colors to wear at the show. du Arena started to fill as we anticipated for the show to begin. The show sold 25,000 tickets, I heard. It seemed that, like me, quite a lot flew in for this.

After two hours of waiting, O Mio Babbino Caro started playing. A sweet intro to what imagined to be a phenomenon of a show. It was on.

Coldplay opened with 'A Head Full of Dreams', and man, you really land in that world they talk about. Our wrist gears lit to the beat of the songs, the crowd wildly cheered, and I knew I was in for a sensory party.

Coldplay continued with one hit after another: 'Yellow', 'Every Teardrop is a Waterfall', 'The Scientist', 'Birds', and 'Paradise'. Each song was accompanied by its own creative video presentation, fireworks, confetti, blinking wrist gears, and laser light choreography.

Activating all the senses with one jaw-dropping moment after another, I couldn’t find myself recovered in time for every new surprise on the way. First quarter of the concert and I could already pack up and say I got my money’s worth, but no one in their right mind would do that.

Sets started or ended with speeches from the greats: Charlie Chaplin and Muhammad Ali – both with messages concerning unity and kindness, freedom, love and community. This theme was central to what the show, and ultimately what the band is about. The words paralleled with the experience the audience was brought into.

When 'Adventure of a Lifetime' played, humongous colorful balloons were released and my side of the stadium transformed into a playground. Fans on an emotional high started jumping reaching for the balloons, and boy did we feel like children in their freest. Coldplay doesn’t just make you watch them in all their brilliance, but they allow you to tag along in this colourful, glitzy music journey.colourful, glitzy music journey.

It’s one thing to see a great show, but to BE part of the magic unfolding? It elevated the already exceeding level of euphoria. I got that sense of belonging, even if it meant being that little girl getting squished in the middle of the crowd by unknown tall people whose language I could not understand. I was made one with strangers. Music became our common language.

The adrenaline hit a pause when the band moved to the smaller stage by the gen-ad area, which luckily was right by where I was staying. Chris sang 'In My Place', 'Til Kingdom Come' and improvised a song about 2016 on acoustic guitar.

For a minute, the mood switched from high to sober, reflective even. This was the moment I could finally truly revel in Chris’s calm and soothing voice. I let out a sigh, energy more settled and I was left with that quiet joy. This stretched as he went back to the main stage to play 'Amazing Day'. 11:59.

“And I asked, can the birds in poetry chime? / Can there be breaks in the chaos sometimes? / Oh thanks. God, must have heard when I prayed cause now I always want to feel this way. / Amazing day, amazing day. / Yeah, today.”

In your tears and in your blood In your fire and in your flood I hear you laugh I heard you sing "I wouldn't change a single thing." . Goodbye, 2016. Til Kingdom Come #coldplayabudhabi

Chris started with the countdown. We joined in chorus.

Fireworks unleashed for a couple of minutes, people from different parts of the world celebrate in glee together in this space and welcomed each other with New Year greetings. Then the drums beat to 'A Sky Full of Stars''. My goose-bumps could not be tamed. I don’t think I can hear this song the same way again.

The show came to a close with 'Up & Up'. The crowd savored the last minutes of the ride, and it came with a strong finale with pyrotechnics coloured with Coldplay's signature palette.

And just like that, it was over. The New Year’s party continued on with a DJ Saif & Sound.

Half of the crowd left the arena more than satisfied. This experience went beyond what I expected to bring back home in Manila. I left with that Everglow feeling, and thought: if luck is on my side, maybe I’ll see you again in 4 months, Coldplay. Hopefully front and center.

Watch a bootleg of "Yellow" at Coldplay's NYE concert in Abu Dhabi:

Coldplay Live in Manila is happening on April 4 at the SM Mall of Asia Open Grounds - presented by Globe and brought to us by MMI Live.