They always say 'stick with what you know' but Subsonic Eye strongly disagrees.

Priding themselves on their fluidity and ambiguity, the Singaporean indie rock band has become a mainstay in the local music scene, thanks to their versatile sound and innate ability to grow and adapt.

"We love that we no longer lock ourselves into a specific genre, and are free to experiment and play with whatever sound we want to go for. We also love that it really just feels like 5 friends hanging out and jamming some tunes," Subsonic Eye tells Bandwagon. 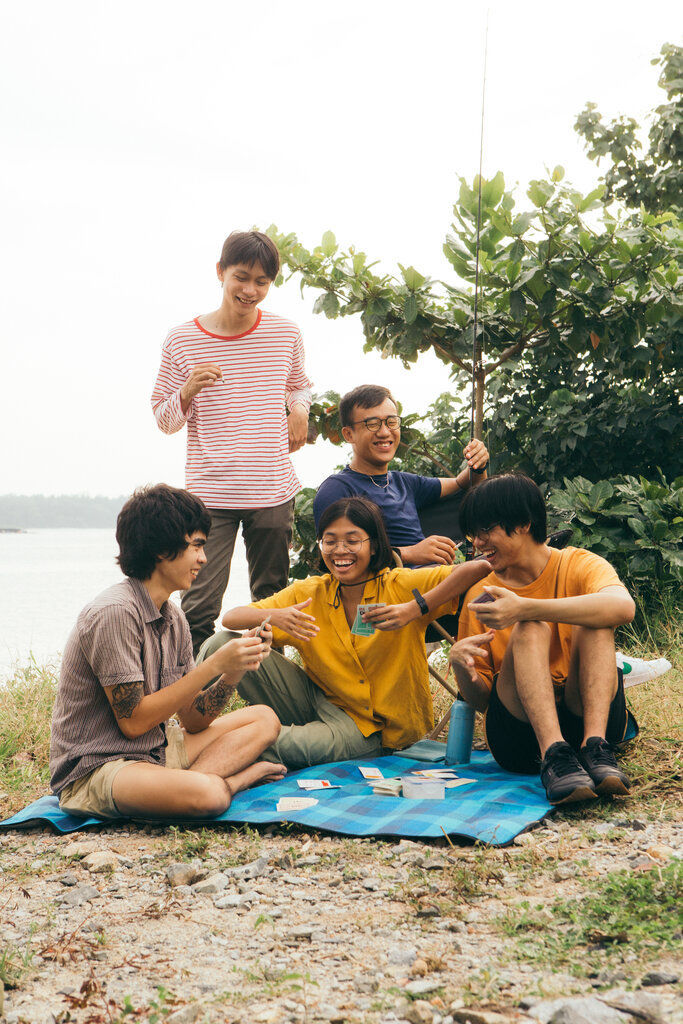 Formed in 2015, Subsonic Eye came to be after an unsuspecting demo exchange between Daniel (guitar), and Wahidah (vocals). Slowly, one after the other, Spencer (bass), Lucas (drums), and Jared (guitar) completed the band's lineup.

Built on a foundation of genuine friendship and passion, the band takes a laidback approach to their music, wanting to let the tunes, rhythm, beats, and lyrics flow naturally. "We have a very loose approach to things and no one is really the main 'leader' so everyone’s opinion equally matters, It’s a very collaborative effort," says the band.

"From the start, we’ve just been doing it the same way. I’ll come up with a rough instrumental demo track, then send it over to Wahidah where she’ll record her vocals over it. We go back and forth until we’re happy with the demos and then we show them to the band and work on them together," says Daniel.

Weaving together the familiar stylings of indie-rock, emo, post-punk, and folk, Subsonic Eye has been well-known for their distinct sound that feels like a summer road trip straight out of a movie. Their musical signature is contrasted with lyrics that go beyond the surface, ranging in topics from intimacy to freedom.

"We hope that it helps our listeners to realise to live more consciously and with more self-awareness," says the band.

Subsonic Eye came out with their first album in 2017, entitled Strawberry Feels. Born out of teenage angst, and the highs and lows of growing up, the 10-track record instantly shot the band up the ranks of Singapore's music scene. Described to be a collection of love stories and tragic tales, the album has accumulated hundreds of thousands of streams online.

Since Strawberry Feels, the band has gone on an exciting journey, having released a second album and toured all around Asia, and even shared the stage with top acts like Beach Fossils, Turnover, and Yuck.

Starting their 2021 with a bang, Subsonic Eye just released their third studio album entitled Nature Of Things.  Beautifully signifying coming to the terms with their place in this strange world, the record showcases the band's raw musicality and poetic lyricism.

"Nature Of Things came about through wanting a more raw and bare sound. We got jaded with the haziness and the effects. I started to just write with the acoustic guitar and played around with alternate tunings, and Wahidah wrote more straightforward lyrics and just sang more intuitively. When we shared the demos with the band, they resonated and got it immediately and it was all smooth sailing from there," says Daniel.

The band shared the first glimpse of the album late last year with the singles 'Unearth' and 'Fruitcake'.

"['Fruitcake'] is the personification of the feelings of being full of angst and anger towards the world, but as the song goes, the ‘character’ is shaken to wake up and be aware of the beautiful and good things in life," says the band.

"[While 'Unearth'] is about being in ecological grief, and just how the world has come to be."

Nature Of Things is the band's first and boldest step at reinventing themselves. Released in a tumultuous time, one abundant with more downs than ups, the album serves as a reminder to enjoy the good moments amidst the crazy and to appreciate the beauty of the process.

During the height of the lockdown in Singapore, the band continued to work on the album and even released a 6-track EP called Bedroom Sessions, to fundraise for a non-profit organisation that helps out migrant workers in Singapore.

To celebrate the release of the Nature Of Things and Singapore's music scene gradually regaining a sense of normalcy, Subsonic Eye is holding an album launch concert at the Esplanade Concert Hall on 6 February.

This serves as the band's first live show since the start of the pandemic. "[We're looking forward to] feeding off the energy of the crowd, the loudness of everything, the vibrations, and hanging out with friends, with masks of course,"  says the band.

In their six years, Subsonic Eye has undoubtedly achieved a lot - from regional tours to developing their unique sound, the band has a lot to look back on. When asked if they had any advice for themselves when they first started, Subsonic Eye said this:

Enjoy the process and don’t take things too seriously.