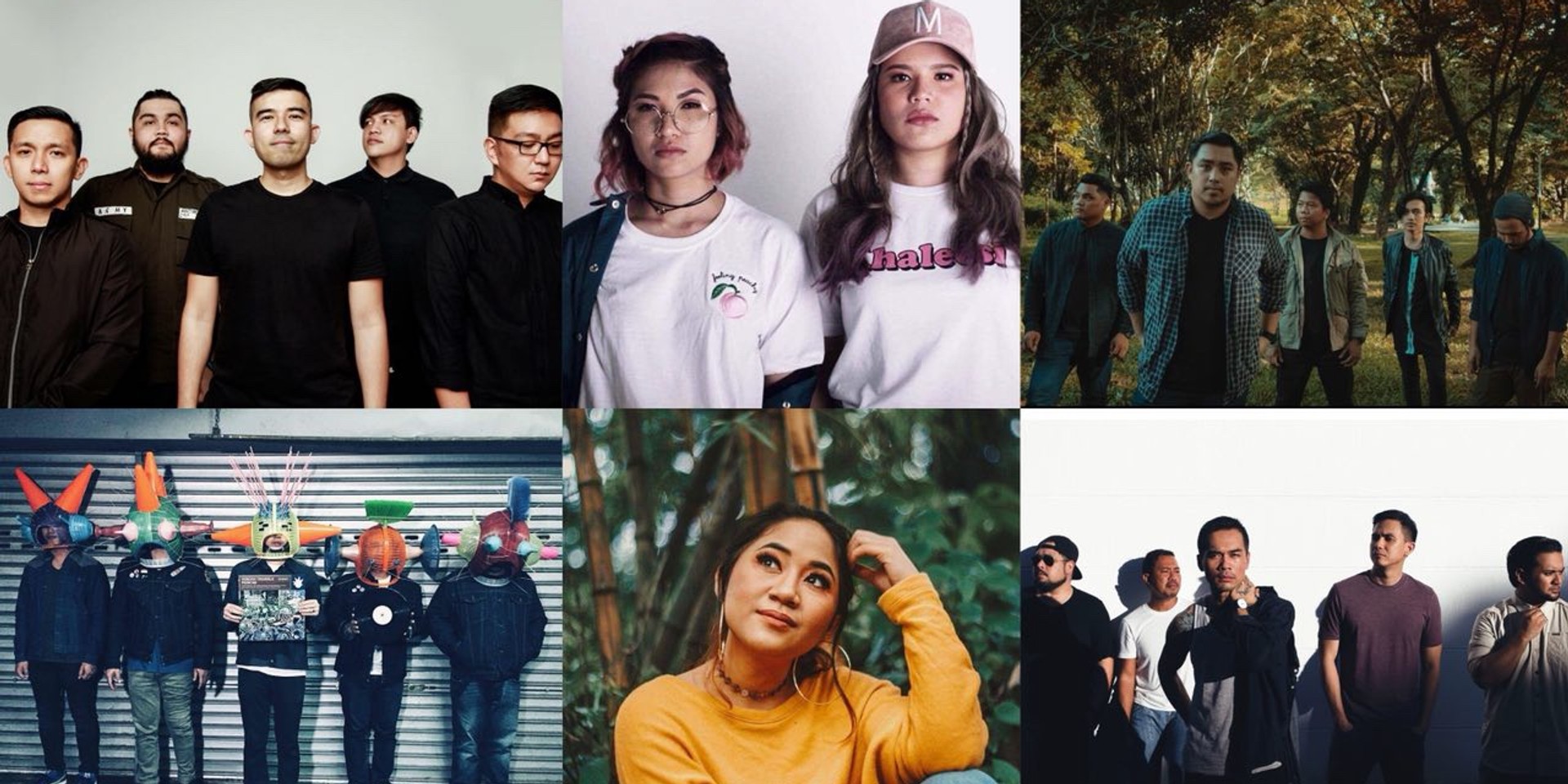 Three sets of musicians, three different venues, three various times of the day, and a bus filled with freebies, friendship, and fun.

That is what our third birthday will be like in a nutshell. On Saturday, March 17, 2018, from 10 AM onwards, we at Bandwagon will kick off a day-long series of live music events in different locations in the metro, spanning across different times of the day. The Bandwagon Birthday Tour stops will have beautiful rhythms, good food and drinks, great conversations and company, and overall exposure to the music community—the bare necessities for any music lover and gig attendees. 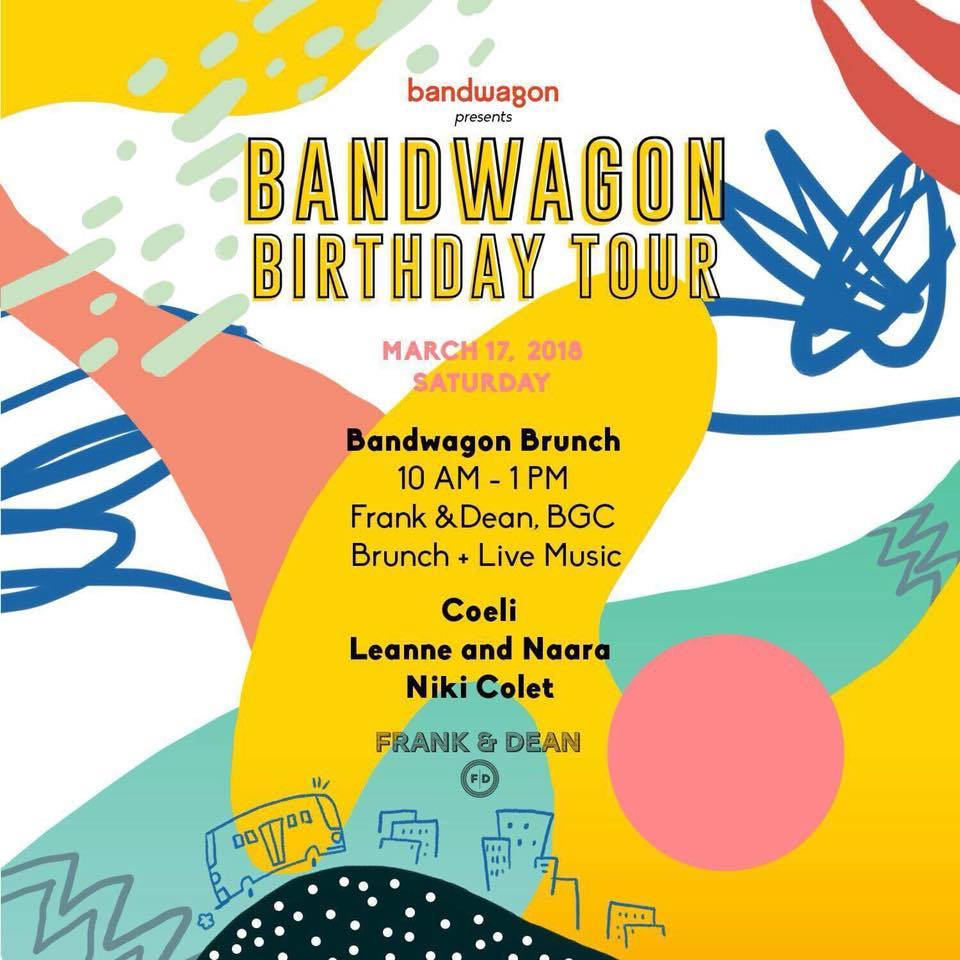 What started as a tweet (by one of the artists in our lineup, nonetheless!) blossomed into an awesome collaboration among minds who believe that live music is not and should never be exclusive to the night alone. We all know that listening to bands while the sun’s still up is as refreshing as it is when the sun is down...and a delicious meal and a fresh cup of coffee won't hurt either. 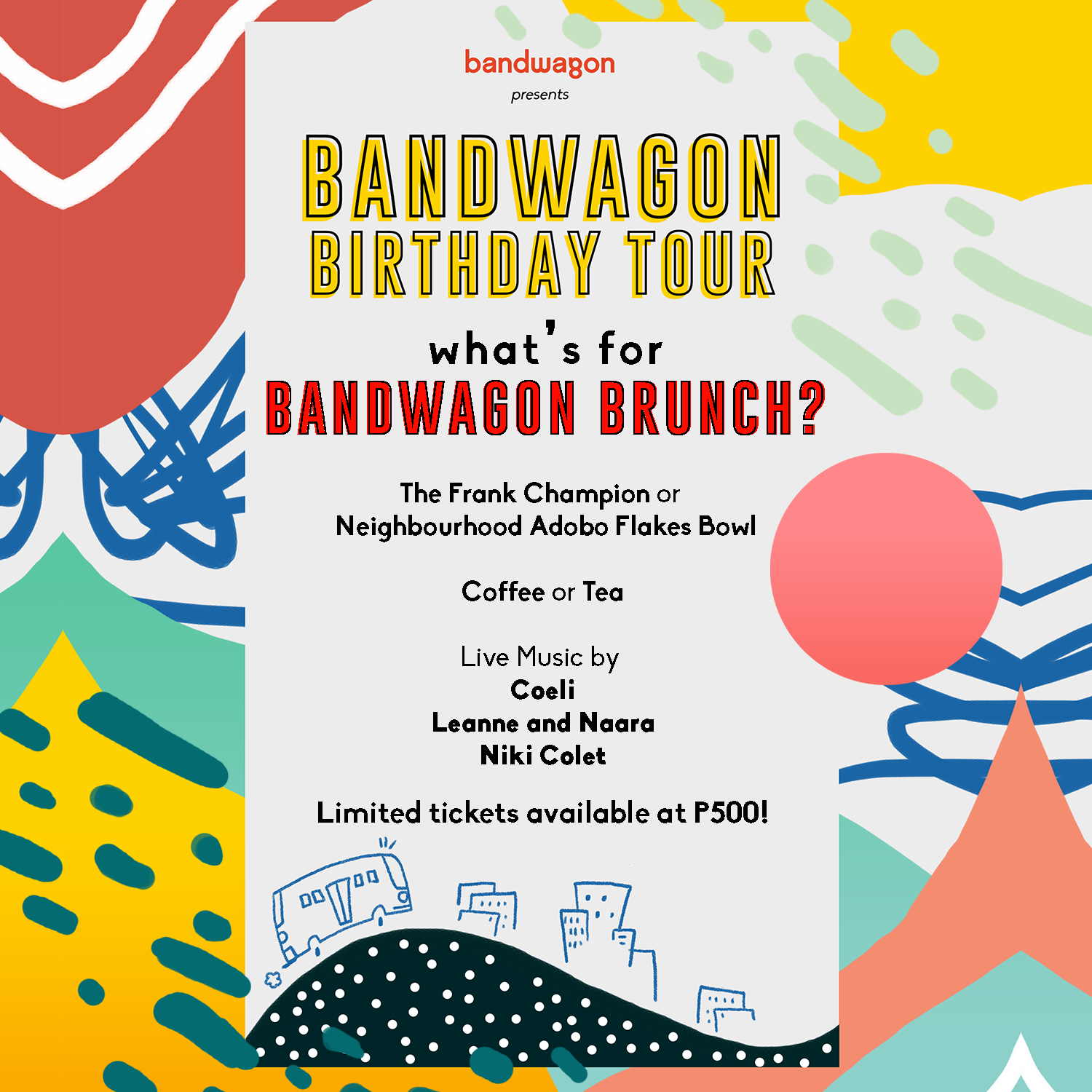 This is why we're starting our birthday party as early as 10 AM with Bandwagon Brunch at Frank & Dean! Get ready for the soothing yet energizing performances by singer-songwriters Coeli, Niki Colet, and Leanne and Naara’s - gentle reminders why mornings are called “good”.

Flashback to 2015 when we were starting out in the Philippines: we got some music lovers to hop on a bus with us and explore our then-new terrain before heading to that year's Wanderland, visiting the hippest and happening gig places and vinyl stores in the country.

Fast forward to 2018 and we're bringing the Bandwagon Bus back to take us from the first to the very last stop of our birthday series. This time, the Bandwagon Bus is powered by Filipino travel app, Tripkada - the answer to overspending for transportation, especially with surge and ridiculous commute rates. Sadly, we might still subject to Manila’s peak hour traffic but we’ve got you covered: the bubbly Bea Lorenzo will be hopping aboard the Bandwagon Bus with an all-kalimba set to keep us company. Heads up: the Bandwagon Bus has very limited seats - 45 to be exact.

Hop aboard the Bandwagon Bus and you get to witness this: a secret show with a secret line-up in an undisclosed location. While it may sound exclusive at best and sketchy at worst, music is for everyone, so we’ll be providing these clues: just dress cool for this nice, off-the-record show happening from 4 PM to 7 PM. Your first drink is on us! 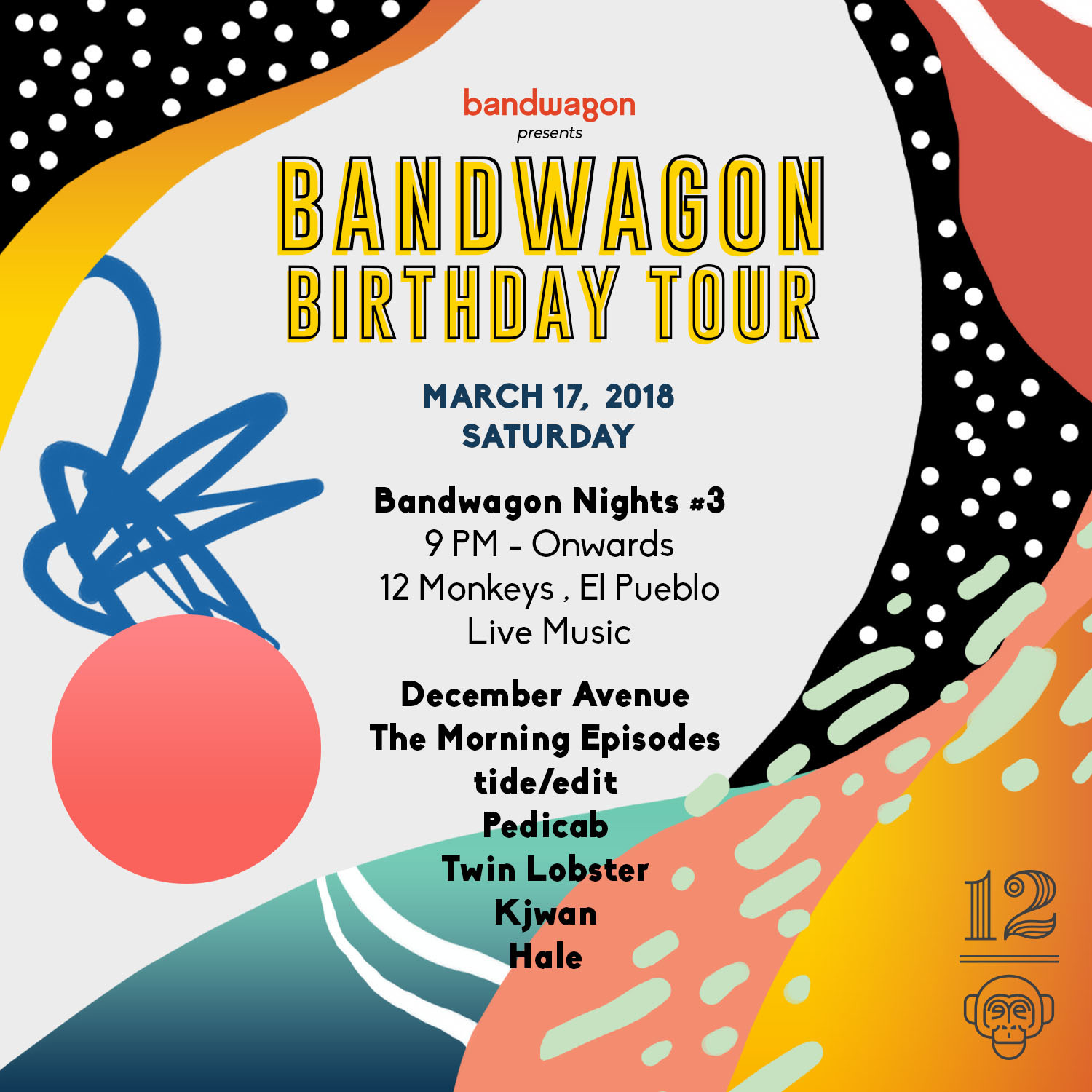 Bandwagon Nights #3 marks the final leg and main event of our 3rd birthday. As one of the very first venues who welcomed us in Manila, our first stop on the Bandwagon to Wanderland in 2015, and our venue for our first Lucy Rose show in 2016 and Bandwagon Nights #2, we’re heading to 12 Monkeys Music Hall & Pub in El Pueblo with a grand lineup composed of artists we’ve since called friends and family.

Our birthday bash finale will kick off at 9 PM where we have Hale, who gave Bandwagon nothing but support since their comeback at Wanderland in 2015, December Avenue, the first band we ever sent to Singapore for our mall show series; tide/edit, a band we’ve been trying to book since we first got to Manila, but our schedules never matched - until now; Twin Lobster (Nick Lazaro played for us on the Bandwagon Bus back in 2015); our favorite alien friends Pedicab, Kjwan, one of the very first artists who helped out Bandwagon when it started in Manila, and The Morning Episodes - frontman Miguel Escueta is also the co-owner of Frank & Dean, the go-to spot for good music, food, drinks, atmosphere, and ambiance.

Bandwagon Birthday Tour Day Bus Pass: 1,200 PHP (gets you into Bandwagon Brunch and a seat on the Bandwagon Bus, plus access to Bandwagon Hush; Bandwagon pin)  Get tickets here.

Bandwagon Birthday Tour Night Bus Pass: 1,100 PHP (gets you a seat on the Bandwagon Bus into Bandwagon Hush and Bandwagon Nights #3; Bandwagon pin) Get tickets here.

*prices are exclusive of booking fee 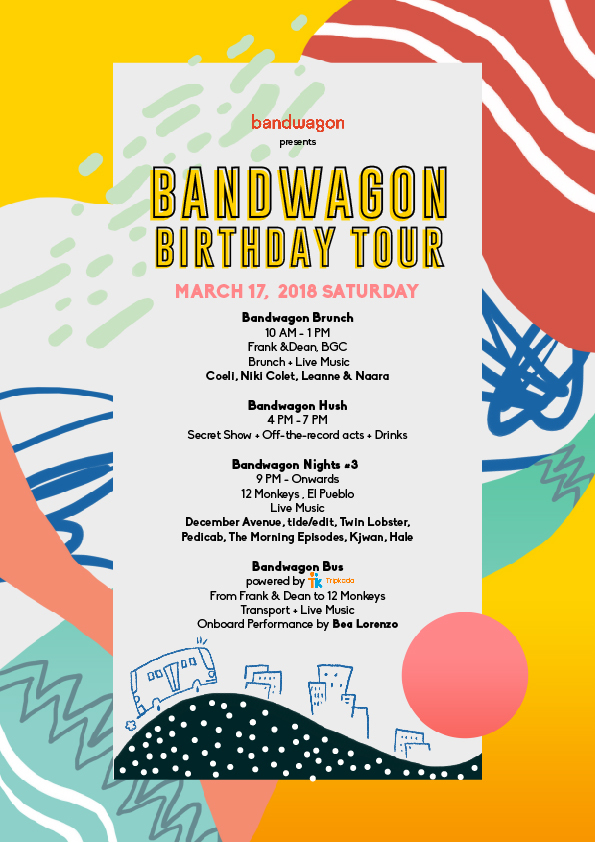 We can't wait to see you as we express our joy and gratitude for the last three years we've been blessed with great music! For now, though, take a good earful of what to expect from our birthday bash below:

The Bandwagon Birthday Tour is happening on March 17, 2018. Tickets are on sale now.