BTS are gearing up for the release of their upcoming album, BE, this November.

The new record is the second BTS album for 2020, having released Map of the Soul:7 last February. Scheduled to go on a world tour in support of their first 2020 release, the group was forced to cancel all shows due to the ongoing COVID-19 pandemic. A record-breaking virtual concert, MAP OF THE SOUL ON:E was held last September instead, where BTS performed songs from Map of the Soul:7 live for the first time, alongside their first-ever Billboard Hot 100 hit, 'Dynamite'.

"WE, BTS, ARE NOT SEVEN; WE WILL BE THE STORY OF YOU, ME, AND OF US ALL." BTS STAY CONNECTED WITH FANS IN RECORD-BREAKING VIRTUAL CONCERT

Since the release of their first English single, the global superstars have since performed at numerous awards shows, had one tv guesting after another - including a one-week residency on the Tonight Show starring Jimmy Fallon, taken home several awards, and broken even more records - all while preparing for their fifth full-length Korean language album.

From the release date to how to purchase the new album, here's everything you need to know about BE.

The album will be available for preorder starting September 28 at 11 AM KST (10 PM EST/ 10 AM PHT/SGT) until November 19. Pre-save the album via Spotify or Apple Music here.

On October 30, the group unveiled a teaser for their title track, 'Life Goes On'. BTS will be performing the new single, along with 'Dynamite', at the 2020 American Music Awards happening on November 22. The Pdogg-produced track was written by Pdogg, Ruuth, Chris James, Antonina Armato, and BTS members RM, SUGA, and J-Hope.

'Life Goes On' will be available on limited edition 7" vinyl and cassette via the official US BTS store. Shipping is limited to the US only. Preorder here. The track is also available for digital preorder here.

BTS streamed a video log on September 22, discussing their ideas for the music video of their first single from BE. The group talked about many ideas and brought up the possibility of Jungkook directing the music video himself, having filmed short videos for his project, Golden Closet Film.

On October 21, Jungkook shared a YouTube livestream, where he told ARMYs who tuned in how he had just recently finished working on the new music video. He also confirmed that his name would appear in the credits as the director and that he was grateful to have had an opportunity to get to "learn how these things are done."

Get ready with #BTS for the <Life Goes On> Official MV release!

Join us for the BANGTAN TV-exclusive 'BE' Comeback Countdown on Nov.20, 1:30PM(KST), Nov.19, 11:30PM(EST) right before the premiere of <Life Goes On> Official MV
*Link to follow#BTS #방탄소년단 #BTS_BE #LifeGoesOn pic.twitter.com/7h0hLaZ8rq

LIVE GOES ON on VLIVE 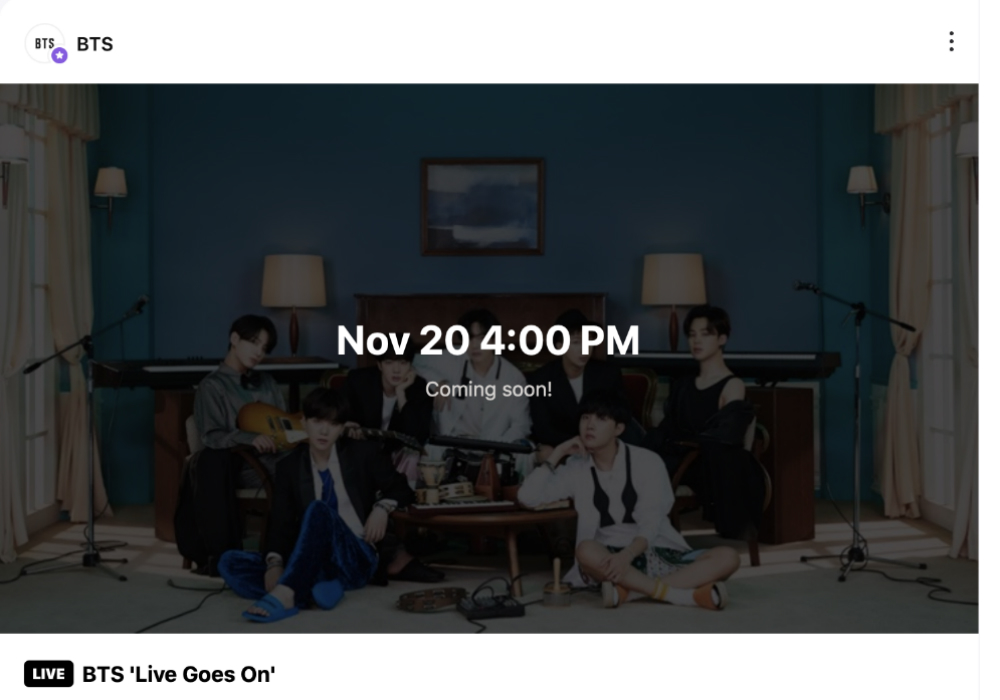 The new album will feature 8 songs, including their first English single, 'Dynamite,' as well as the title track, 'Life Goes On'.

Check out the full tracklist with track lengths below:

In a WeVerse announcement, Big Hit Entertainment shared that the new record will have "the most BTS-esque music yet". Consistent with their recent message of hope at their United Nations address, the new album will also continue with the group's constant theme of healing.

Last May, the group shared a video log of one of their team meetings, discussing the importance of relaying the message of hope, but at the same time, being realistic about what they convey through their words and music. "Carry on" and "life goes on" was a recurring theme that everyone agreed on.

The subject of subunits was also touched on - in Map of the Soul 7: the rap lines and vocal lines had their own tracks, along with songs by Jimin and V, and RM and Suga.

"We poured in the emotions that we feel now, such as joy and sorrow, into this album," Jimin also said in an interview on The Tonight Show with Jimmy Fallon last September.

BTS open Map of the Soul online pop-up store, with showcases in Seoul, Singapore, and Tokyo, here's what you need to know

In video log in early May with V, RM, and J-Hope, it was revealed that V would be taking the lead in the creative direction of the concept photos. During the conversation, the trio talked about giving fans a peek into their "rooms" with things they enjoy, as well as sets they've curated themselves.

Check out the concept photos below:

V: "The picture behind me... I think it's more meaningful because I took the picture myself."

Jimin: "I wanted both myself and the flowers to look the best for ARMY."

RM: "I wanted to create a  comfortable room you don't get tired of, a place you spend time every day."

Jungkook: "I wanted to create a room booming with music, so the viewer can catch a glimpse of who I am inside."

Suga: "A mirror is a special object. It shows a reflection of you, letting you know you exist in the here and now."

J-Hope: "Like J-Hope, this space is bright, colourful, and speaks of an energetic ambience."

What's in the deluxe version?

On Friday (11/13), BTS shared a preview of the new album with an unboxing video of the Deluxe Edition of BE on YouTube.

The BE (Deluxe Version) includes the following: 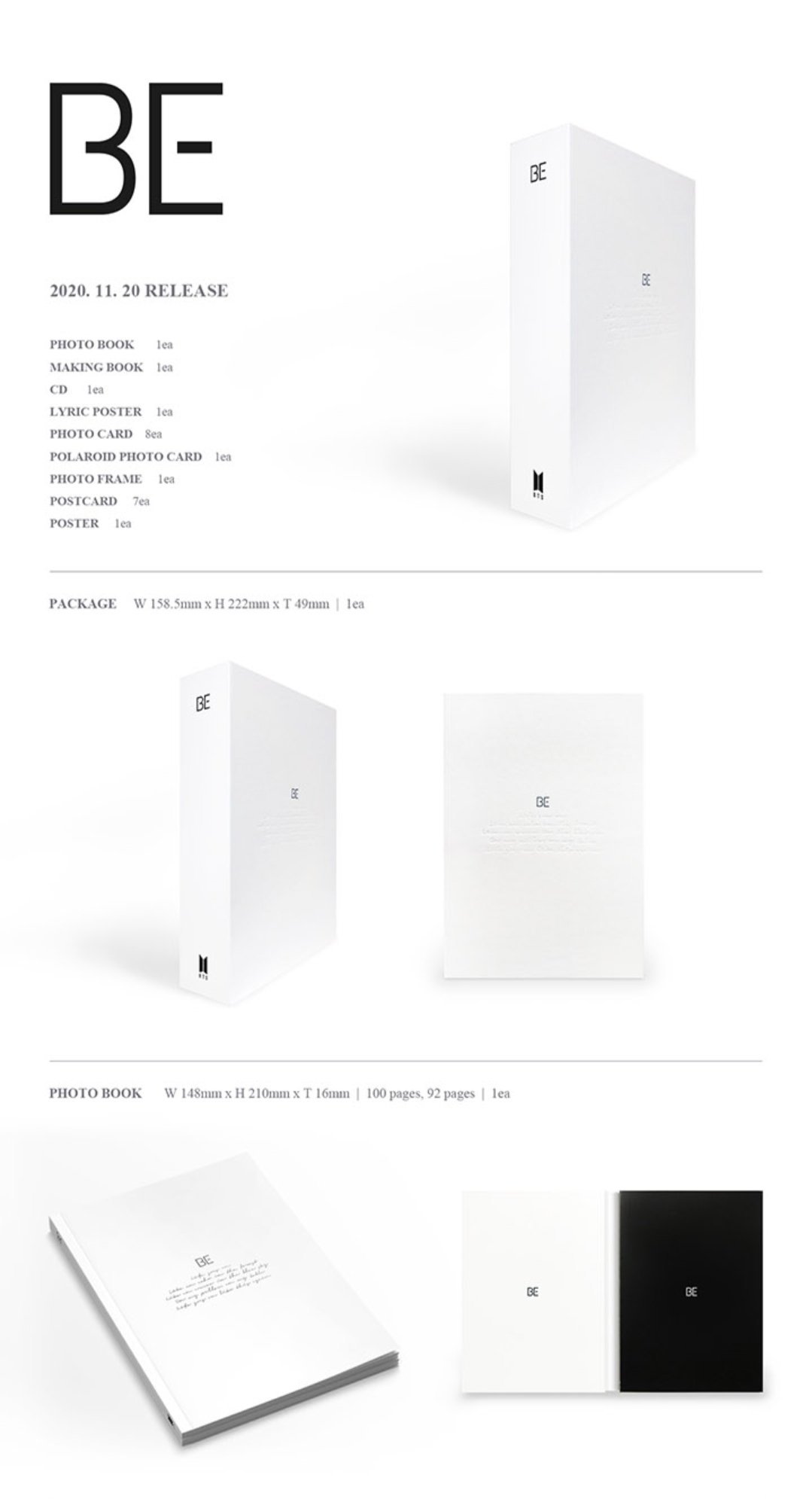 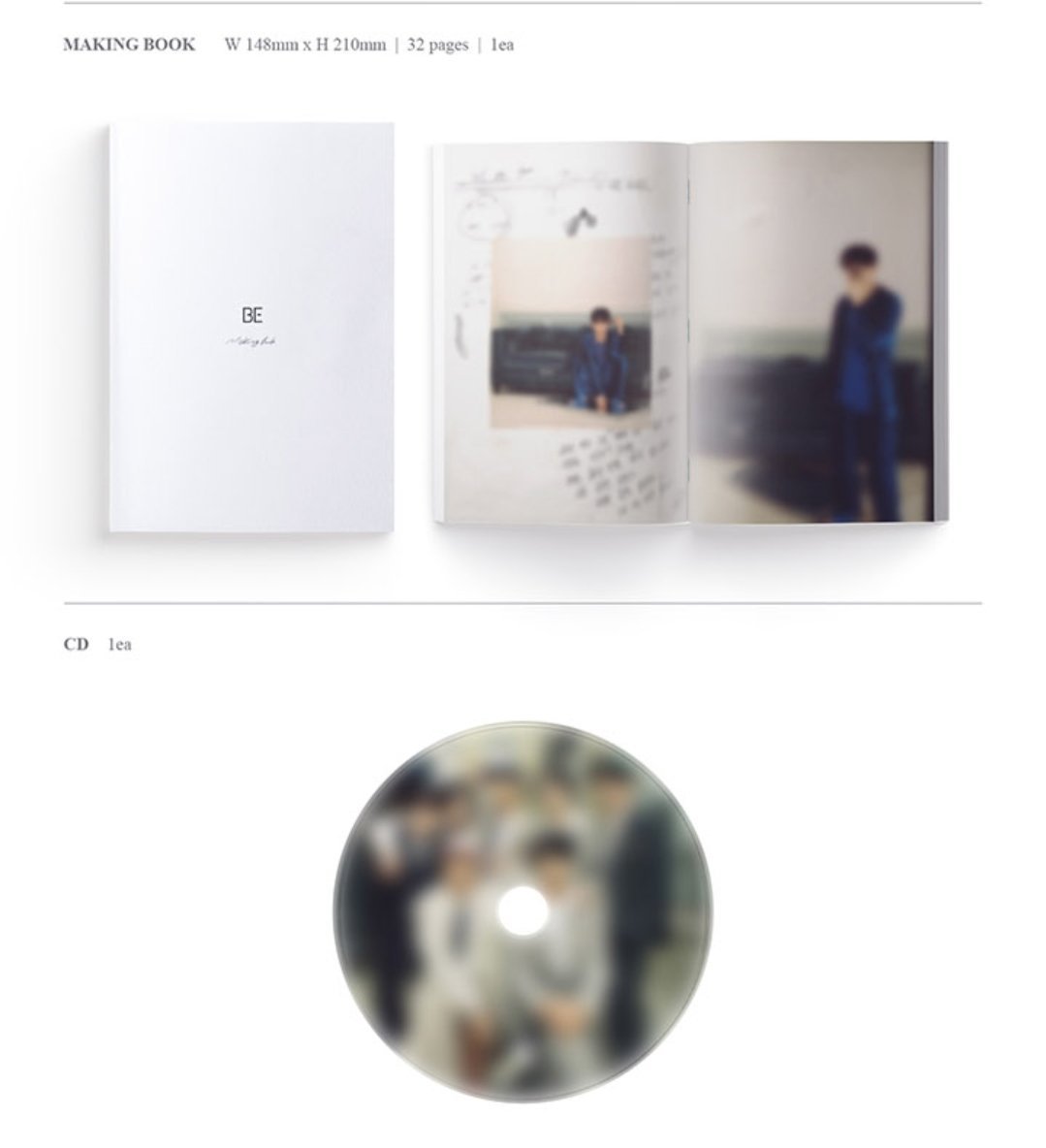 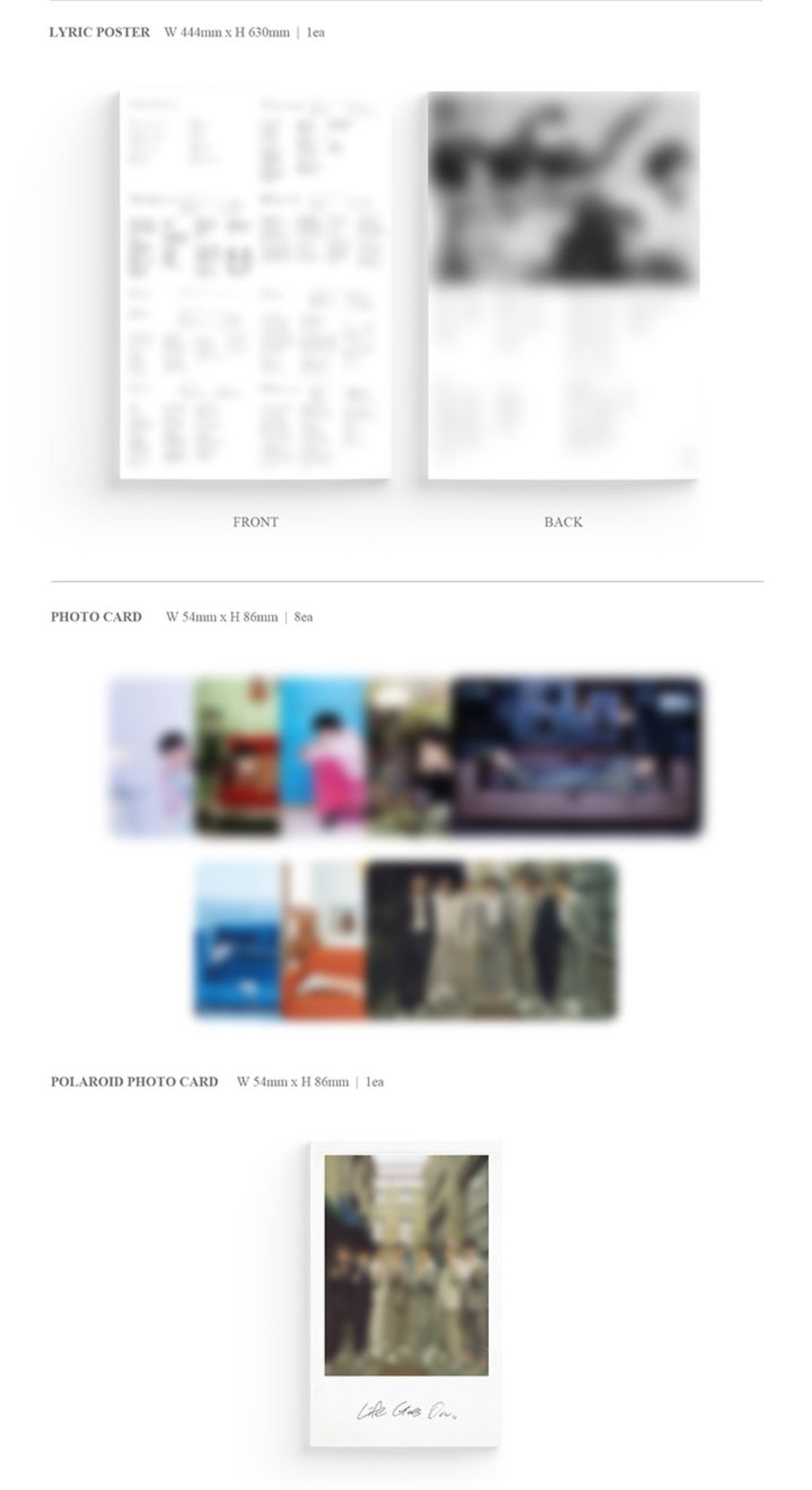 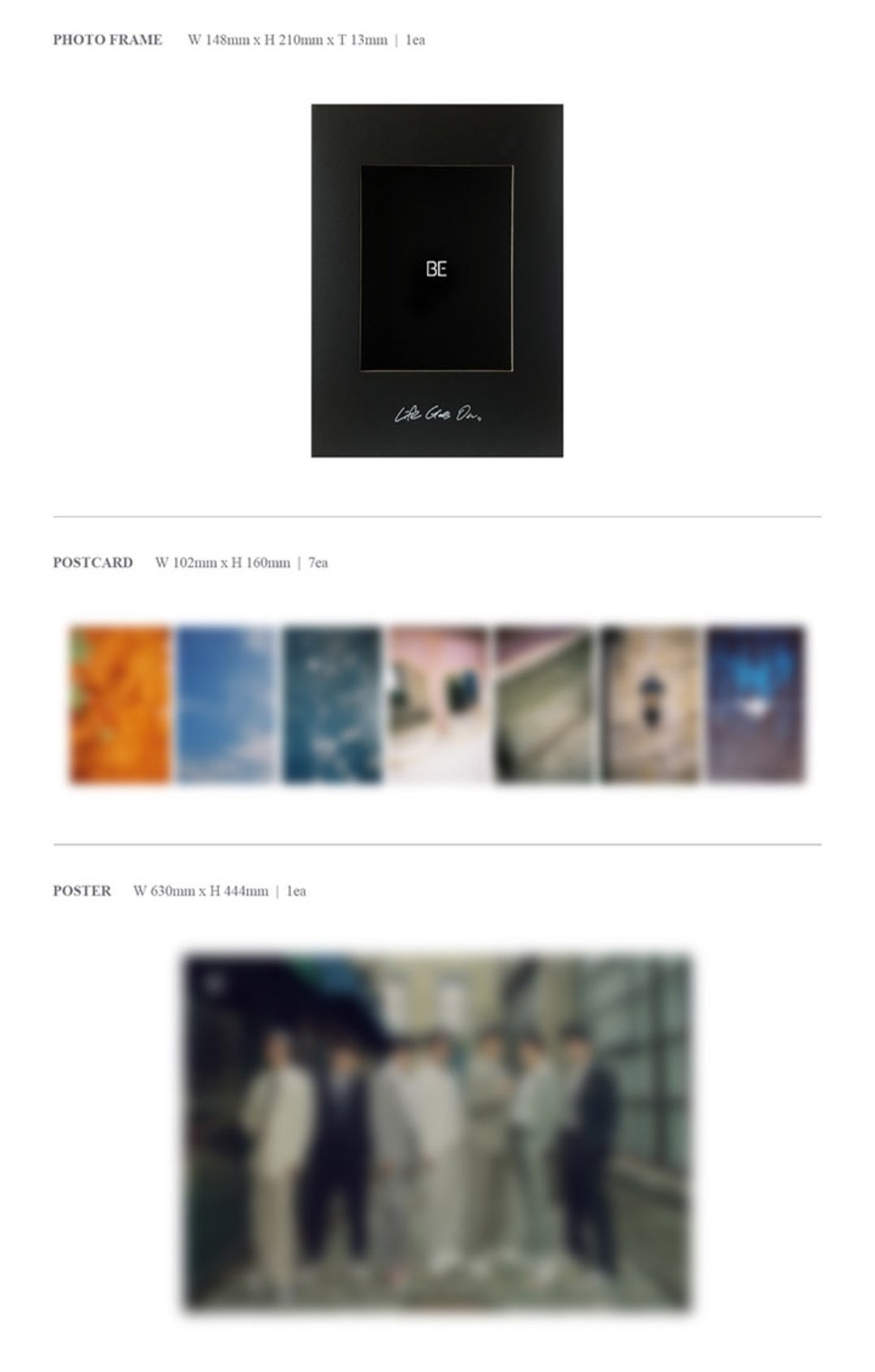 WHERE TO GET THE ALBUM

BE (Deluxe Edition) is now available for preorder via the following outlets: