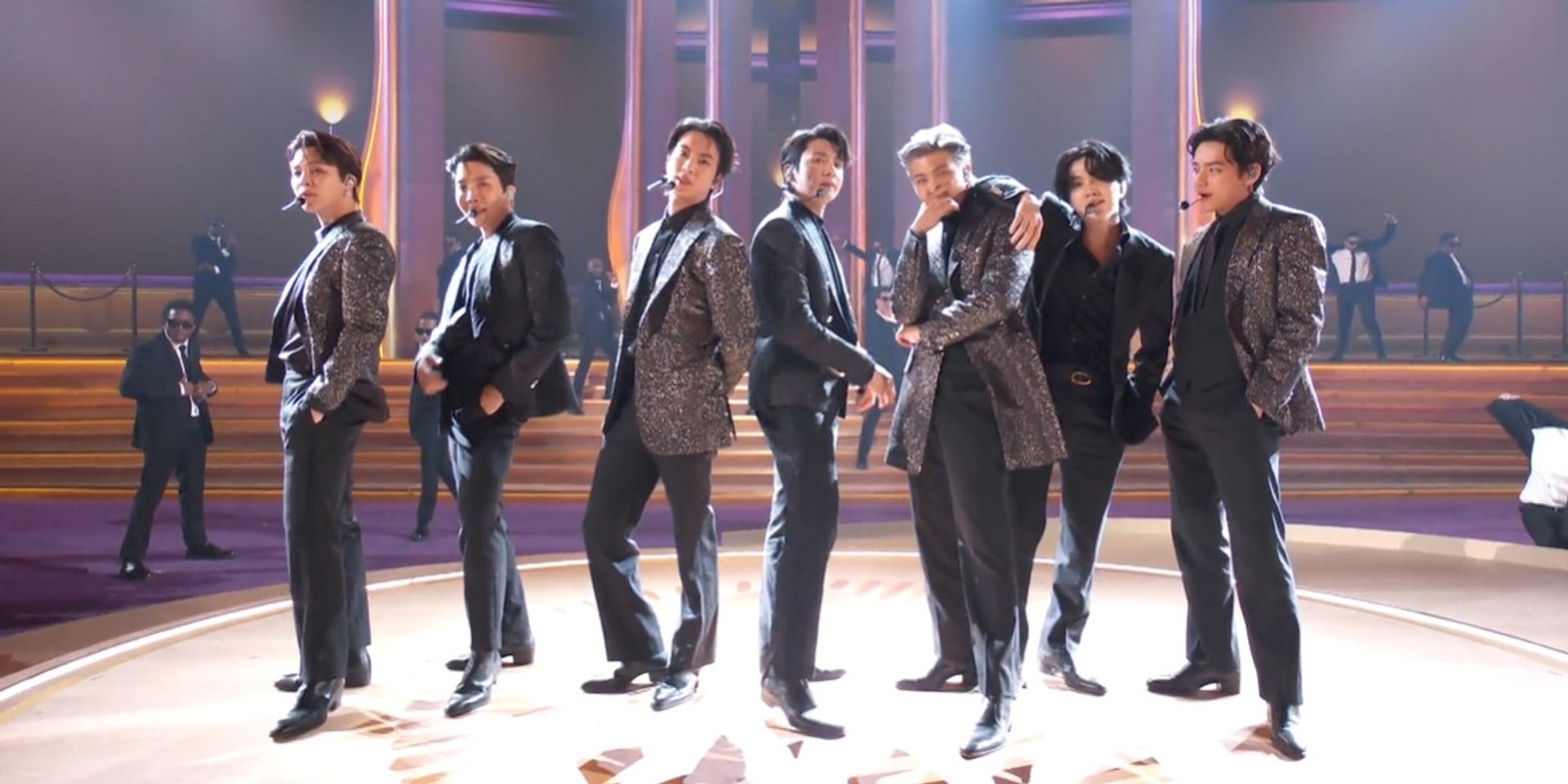 For their first in-person appearance at the most prestigious music awards show since 2020, the global superstars delivered a 007-inspired performance of their GRAMMY-nominated song 'Butter'.

Lounge jazz music plays as the main stage of the MGM Grand Garden Arena in Las Vegas is dimly lit with a cool-tinted light veiling over Jin. He's playing The (WWH) Guy In The Chair, sitting at a control booth, with his left hand in a cast due to a recent injury.

In those minutes on that stage, we saw creativity, character, talent, teamwork, improvisation, tenacity, heart-stopping direction, power, joy, beauty, charisma, pride, presence, dreams fulfilled and gratitude. There’s much for this old bird to learn from these amazing young men.

Daring as ever, Jungkook descends from the ceiling (a throwback to his 'Euphoria' performance), successfully infiltrating the GRAMMY Awards stage as J-hope, Jimin, RM, Suga, and V appear from the audience. To keep up with the James Bond theme, V, slick as he is, whispers into Olivia Rodrigo's ear and pulls a gold card from behind her back. He flicks it over to Jungkook, who catches it onstage and slides the card into a computer to initiate the 'Butter' sequence.

"Smooth like butter," Jungkook sings as his bandmates join him. They make large strides down from the centre stage (where J-hope almost stumbles, but makes a buttery smooth recovery) and make their way to an art gallery, where precious works of art mysteriously vanish one by one.

So. BTS robbed an art gallery (art work originally there disappeared one by one), then plastered the wall w lyrics from their Korean discography (HYYH), graffiti’d over it in purple & orange, and then hung photos of themselves from HYYH area (plus one stage pic w ARMY). Oh boy pic.twitter.com/jRbriVYGwG

For another iconic dance break, BTS flip and manoeuvre through a maze of lasers for a breathtaking dance break. Jackets flapped around, bringing the group together, as the paintings completely vanish and are replaced with lyrics of '불타오르네 (Fire)' and '쩔어 (Dope)' then to purple and orange graffiti.

Suga opens with his rap verse and photos of the group from their HYYH era appear behind them. They're then joined by The Lab Studios dance crew, who also shared the stage with BTS at their PERMISSION TO DANCE ON STAGE concerts in Los Angeles last year.

To close off their number, BTS return centre stage with gold and purple lights shining all around them - including Jin to spell out ARMY and for a full OT7 dance performance. Thunderous applause rises into the air as they receive a standing ovation for one of the best performances of the night.

Later that evening, the 'Dynamite' act take to VLive to celebrate their in-person debut performance at the GRAMMYs. They then reveal that they'd only rehearsed as a group the day before the awards show. Their nerves might've gotten to them (they say it's the most nervous they've ever been in recent time), but they gave it their all for ARMY.

BTS share their GRAMMY moment with ARMY: "What we've done is already amazing"

With this performance as a prelude for what's to come, RM, Jin, SUGA, J-hope, Jimin, V, and Jungkook are set to take over Las Vegas in the coming weeks as they hold their sold-out 4-night residency, PERMISSION TO DANCE ON STAGE - LAS VEGAS, at the Allegiant Stadium. MGM Grand Garden Arena, the same venue of this year's GRAMMYs, will also play host to the live broadcast of the concert series this April.