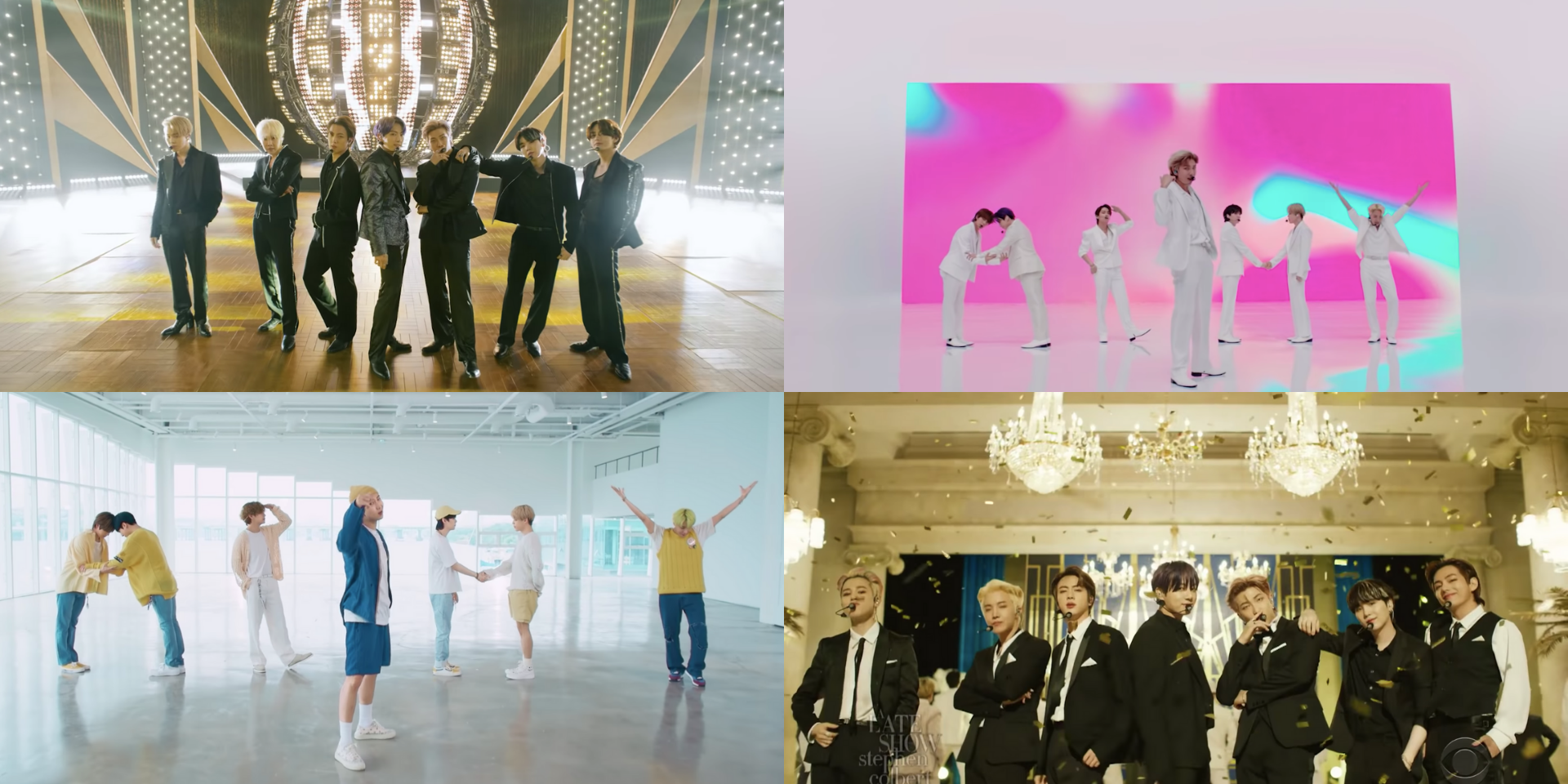 To say the least, BTS' newest single 'Butter' has had a smooth start.

In less than 15 minutes of its debut, the all-English track accumulated over 10 million views on YouTube, making it the fastest music video to reach a milestone of its kind. Eventually after 24 hours, 'Butter' garnered 108.2 million views, breaking the record of their own 'Dynamite' which had clocked in 101.1 million views.

The single has the biggest Spotify debut in history, racking up over 11 million streams in just 24 hours, and even debuted at No. 1 on Billboard's Hot 100.

'Butter' has spent a total of 9 weeks at No. 1, returning to the top spot after passing the baton to 'Permission To Dance'.

So in short, BTS' 'Butter' is doing really well.

From its debut performance at the 2021 Billboard Music Awards to their dance practice video at the new HYBE office, we've compiled a list of 'Butter' performances for you to enjoy below.

BTS' first-ever live performance of 'Butter' was at the 2021 Billboard Music Awards, an awards ceremony that the group hold very close to their heart. Held this past May, the pop icons clinched four awards, including the Top Social Artist Award for the fifth year in a row. BTS also won Top Duo/Group, Top Song Sales, and Top Selling Song for 'Dynamite'.

From the soundstage to the red carpet to finally, the glittering stage, BTS wowed audiences from all over the world with an explosive performance of the dance-pop track.

BTS fans get creative with their 'Butter' album decorations

THE LATE SHOW WITH STEPHEN COLBERT

Donning sleek suits and against the backdrop of a grand ballroom, BTS gave a heart-melting performance of their new summer anthem on The Late Show With Stephen Colbert.

Aside from the performance, the group also took part in a skit where they introduced Colbert and audiences to new hand gestures after popularising 'finger hearts' all over the world. Get ready to use the 'kidney' and 'pogo stick' and 'paper shredder' in your next photos!

As part of the 36th Golden Disc Awards, BTS aired their performances of 'Butter' and 'Life Goes On' from their PERMISSION TO DANCE On Stage in LA concerts last December.

After their appearance on Good Morning America last year, a white-clad BTS return to give a mesmerising of 'Butter', as well as their GRAMMY-nominated track 'Dynamite'.

Prior to their performances, the pop titans joined the show live from Seoul to talk about 'Butter' and the inspirations behind it, and how the group spent all of quarantine together.

In time for the release of their latest Japanese compilation album, BTS, THE BEST, 'Butter' made its live debut on Japanese TV via NTV's MUSIC BLOOD.

In another performance for Japanese TV, BTS performed their latest single decked in shades of white and gold.

Ahead of their 'Butter' CD single drop, BTS went on SIRIUSXM to perform both 'Dynamite' and 'Butter'.

A BUTTERFUL GETAWAY WITH BTS

To celebrate the release of their new single, the group hosted a talk show special called A Butterful Getaway with BTS on NAVER NOW. BTS took to the stage with 'Butter,' 'Spring Day,' and the first-ever performance of 'Permission To Dance'.

For this year's FNS Music Festival, BTS took over a grocery store in another smooth performance of 'Butter' for their Japanese audience.

For their 2-day takeover on the Tonight Show Starring Jimmy Fallon, BTS performed their 2021 singles - 'Permission To Dance' and 'Butter'. The global superstars showcased the city lights making their way down the yet-to-be opened World Cup Bridge in South Korea.

For their BBC Radio 1 Live Lounge debut, BTS performed 'Butter' for the first time with their live band, Ghost. Also on the setlist are their record-breaking singles 'Dynamite' and 'Permission To Dance,' plus a cover of 'I'll Be Missing You'.

Marking their first performance in 2 years with a live audience, the 2021 American Music Awards Artist of the Year winners brought their chart-topping hit, 'Butter,' to the Microsoft Theatre closing the AMAs.

Nominated for Best Pop Duo/Group Performance, BTS stunned the GRAMMY audience with a slick performance of their record-breaking hit.

In outfits that remind you of bright summer's day, BTS share a special performance video of 'Butter' that they lovingly dedicated to "SWEETEST ARMY".

It's been over six months since HYBE, formerly known as Big Hit Entertainment, announced their move to a new office building, and fans have been eagerly waiting to see BTS' new practice room – and finally, it's here! Practising the choreography for 'Butter', the group shared a sneak peek into their new rehearsal space and easily proved that, even in practice, their moves are smooth like butter.

If anything, 'Butter' is the perfect karaoke song with its energetic beat and catchy lyrics; so BTS' 노래방 or karaoke version of their hit new single makes perfect sense. Donned in wacky wigs and BT21 hats, you can't help but re-watch this hilarious version of 'Butter' again and again.