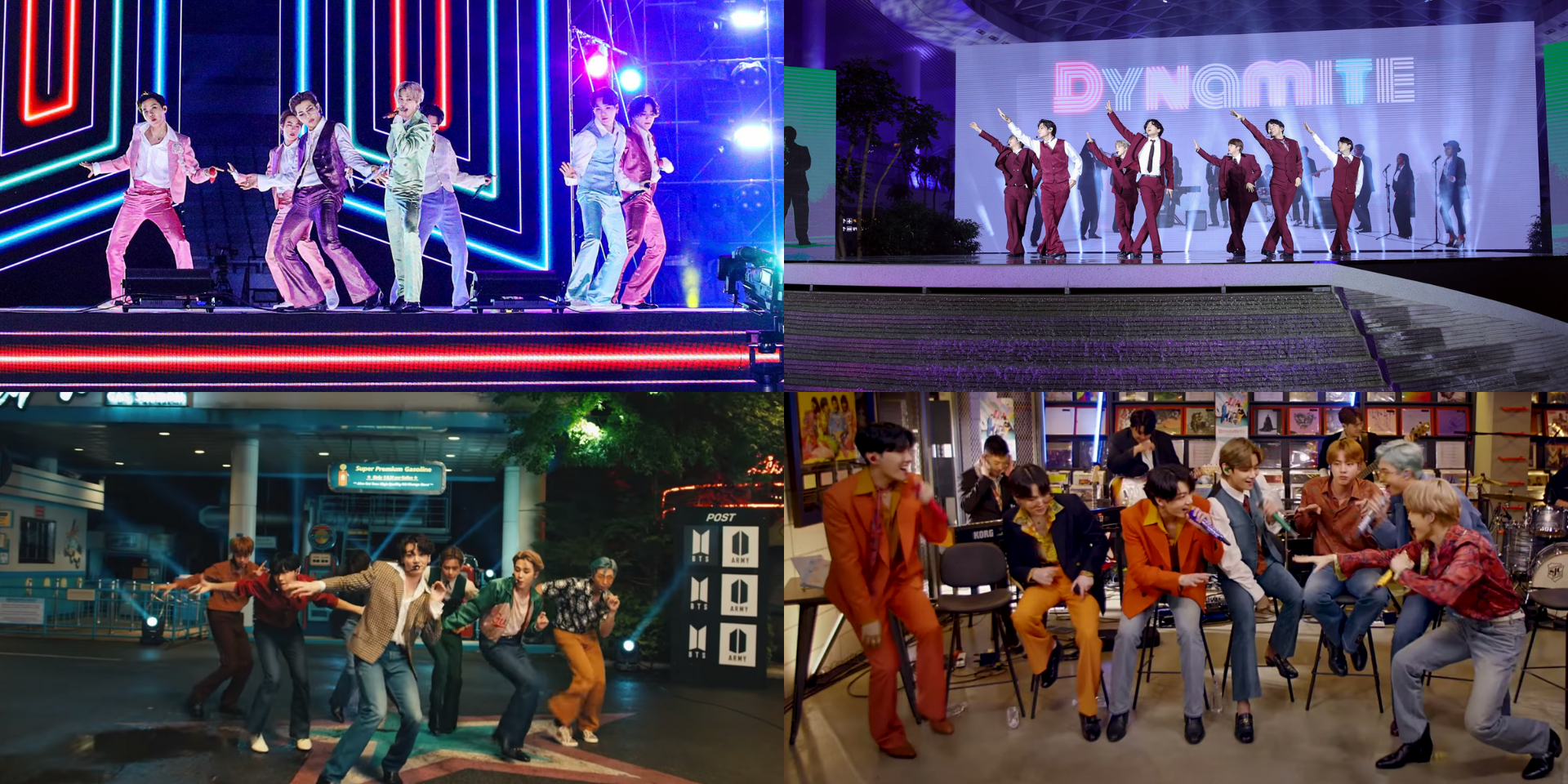 BTS have never failed to stun us.

Whether it's having the catchiest songs topping charts or making stellar performances on the biggest stages, RM, Jimin, Jin, Jungkook, Suga, J-Hope, and V always have it in them to deliver their maximum potential, making waves from country to country.

BTS RELEASE NEW ALBUM, BE, THEIR MOST PERSONAL RECORD YET, HERE'S A TRACK-BY-TRACK GUIDE – LISTEN

Recently, they brought that to the next level with their first English single, 'Dynamite'.

Arguably one of the biggest songs of 2020 summer, 'Dynamite' has soared past all sorts of records (the music video has surpassed the 700 million mark) and charts this year. Aside from it reaching the top of the Billboard Hot 100, 'Dynamite' has also been nominated at the 63rd Grammy Awards for Best Pop Duo/Group Performance, making BTS truly a global phenomenon to be reckoned with.

From the song's live debut at the 2020 VMAs to their powerful showcase on NPR's Tiny Desk Concert series, we've compiled a list of 'Dynamite' performances you must watch alongside their record-breaking music video below.

BTS' first-ever performance of their hit English debut was at the MTV VMAs in late August this year. While it feels like a decade ago thanks to their running list of awards, the MTV VMAs was where the group clinched their first huge win of four awards, namely Best K-pop, Best Group, Best Choreography and the prestigious Best Pop, never won before by an Asian artist.

Due to the weather, however, the performance had to be switched to indoors. Initially, BTS had planned to film it outdoors to "show everyone the scenery in Seoul".

BTS may not have won a Grammy yet, but they've definitely set their sights on one (or more). In fact, last year the group got pretty close when they were nominated for Best Recording Packaging, which ultimately went to St. Vincent. Now with the rise of 'Dynamite', we don't doubt they're halfway there.

When asked about where BTS are next headed, RM said, "The Grammy Awards is something all performers dream of. Of course, we would like to perform there too. We would, of course, like to be nominated, and it would be great to receive the award. That's the direction we should be headed for."

In a recent GRAMMY.COM interview, BTS also shared, "It all began from this: even in the midst of hardships, we must focus on what we can do. As for us, we found freedom and happiness in singing and dancing. This song goes to the ones who need encouragement. We hope people feel energized when listening to the song."

After their last appearance in February for Map of the Soul: 7, a blue-clad BTS returned to NBC's Today Show to promote 'Dynamite' with not one but two songs. Besides presenting a remarkable performance of the new record-smashing single, they also performed 'Anpanman' from 2018's Love Yourself: Tear, a nostalgic throwback that only showcases how far along the Bangtan Boys have come.

BTS have already conquered stages far away from home, so it's no surprise that they'd take their performance to neighbouring countries too – this time for The Music Day, a Japanese music festival featuring the top artists in Japan's music industry. Organised and aired by Nippon TV, this is the first performance 'Dynamite' on Japanese TV.

To kick off their semifinals, America's Got Talent played the right card by inviting one of the biggest global stars today to sing at their show. Filmed at Everland, South Korea's largest amusement park in Yongin, south of Seoul, the appearance is BTS' second guest appearance on America's Got Talent following their first in 2018 for 'Idol', from their compilation album Love Yourself: Answer.

iHeartRadio Music Festival celebrated their 10th birthday online - with millions of fans across the globe. This year's edition featured performances by the likes of Alicia Keys, Migos, Coldplay, and BTS. The Bangtan Boys opened with their summer hit, 'Dynamite', and went on to perform 'Make It Right', 'Spring Day', and 'Boy with Luv' on different stage sets (plus costume changes!), giving fans a preview of what their live concerts are like.

NPR's Tiny Desk from Home (US)

'Dynamite' makes its debut with a live band in the group's first appearance on the iconic intimate concert series by NPR. In this edition of the Tiny Desk (Home) Concert series, BTS performs an intimate three-song set with their live band Ghost at Vinyl & Plastic by Hyundai Card, which includes 2016's 'Save Me' and the 2017 track 'Spring Day'.

Grammy Museum: Programs at Home (US)

BTS guests on the Grammy Museum's Programs at Home series (virtually) for an interview with Scott Goldman to talk about what they've been up to while the world is in lockdown, the fights they used to get into, and what else they have in store for fans this year. The group performs a laidback version of 'Dynamite' with minimal choreography this time around, similar to their NPR Tiny Desk set (minus the live band).

The Tonight Show with Jimmy Fallon (US)

The K-pop group returned to The Tonight Show with Jimmy Fallon and got to sing 'Dynamite' with the late-night show's house band, The Roots and host Jimmy Fallon. The performance marked the start of BTS Week where they also performed 'IDOL' at the Gyeongbokgung Palace in Seoul.

To wrap up BTS Week, the group performed their #1 hit in a roller rink disco. The performance marks the end of their week-long residency which also saw the group perform 'Black Swan', 'Mikrokosmos', and 'Home'.

For the annual Chuseok (Autumn Eve) celebrations in Korea, BTS gave their fans another dance performance of 'Dynamite' - this time at the Gyeongbokgung Palace. The Bangtan Bomb production was part of 6 video drops on October 1st as a special gift to ARMYs around the world.

For their Radio.com appearance in October, the group performed 'Make It Right', 'Mikrokosmos', and their Billboard Hot 100 hit, 'Dynamite'.

BTS open Map of the Soul online pop-up store, with showcases in Seoul, Singapore, and Tokyo

Fresh off their record-breaking virtual concert MAP OF THE SOUL ON:E, BTS graced the BBMAs stage once more for another stellar performance of 'Dynamite'. The group performed their first-ever Billboard Hot 100 hit at Terminal 2 of the Incheon International Airport, alongside a virtual band - complete with backup singers and a superb horn section. BTS took home the award for Top Social Artist for the fourth year in a row.

BTS returned to the American Music Awards stage by way of the Jamsil Stadium in Seoul, South Korea where they performed a full-scale production (complete with fireworks and ARMY bombs) of 'Dynamite'. The group picked up 2 wins - Favorite Social Artist and Favorite Pop/Rock Duo or Group.

After their 2020 American Music Awards win and performance, the group returned to the morning show to play a laidback rendition of their hit song. BTS also performed 'Life Goes On,' the title track from their latest album, BE.

The Late Late Show with James Corden (US)

For their first performance of 'Dynamite' as a Grammy-nominated group, BTS recreated The Late Late Show stage in Korea. In a tweet by host James Corden, he revealed how "emotional" he got over the "effort" and "vision" of BTS and their team to recreate the entire set.

BTS performed their hit single for Japan's Nippon TV Music Festival as part of the 41 Best Artists of 2020. The event marked the group's first performance without SUGA, who is taking a break to heal and recover from a recent shoulder surgery.

BTS opened this year's edition of Fuji TV's FNS Music Festival with a performance of 'Dynamite'. Fans of the group's summer variety show, In the Soop, will notice that the set design for this performance includes paintings done by the members - including one by SUGA, who is currently recovering from his shoulder surgery.

At the 2020 Melon Music Awards, BTS won the Daesangs for Artist of the Year and Album of the Year. BTS also won several awards for 'Dynamite' - Song of the Year and Best Dance (Male) track. Their 2020 MMA performance comprised of 'Black Swan,' 'ON,' 'Life Goes On,' and a special dance break version of their disco-pop hit with the boys decked out in sequins and velvet suits.

With another eventful year and more record-breaking feats under their belt, BTS have been named as 2020's Entertainer of the Year by TIME Magazine. The group has been previously recognised by the magazine as Next Generation Leaders and Most Influential 100.

BTS swapped their glitzy ensembles for slick suits with this colourful performance of 'Dynamite' at the 2020 Fact Music Awards. The group took home the Grand Prize, as well as Year's Artist, Worldwide Icon, and Listener's Choice awards.

Kicking off their 2020 KBS Song Festival performance with a throwback to 2015's 'I NEED U,' BTS segued into their biggest hit yet, 'Dynamite'. Closing off this year's Gayo Daechukje, the group also performed 'Life Goes On,' and joined everyone on the lineup for an all-star rendition of Kim Jang-Hoon's 'Highway Romance (고속도로 로망스)'.

For the CDTV LIVE! Christmas special, BTS made a special appearance for a festive performance of 'Dynamite'. The Japanese latenight television program has played host to the group numerous times throughout the years, with BTS performing 'Your Eyes Tell,' a track off their 2020 Japanese album, Map of the Soul: 7 ~ The Journey ~, last June.

On Christmas Day, BTS delivered a festive performance of 'Dynamite,' with the Holiday Remix making its live debut. With this year's SBS Gayo Daejun set in Daegu (the hometown of SUGA and V), BTS ended the show with a heartwarming message saying that all the artists who took part in the show "hoping that our songs will console you and give you courage".

For the group's final performance of 'Dynamite' in 2020, BTS graced the Weverse 2021 New Year's Eve Live Concert stage. The event also marked SUGA's return to the live stage, joining the group in 'Make It Right' with Lauv, and closing the online affair with 'Life Goes On'.

For their first performance of 'Dynamite' in 2021, the group switched it up with the Slow Jam Remix. BTS closed their Golden Disc Awards performance with their biggest hit of the past year, and took home a total of four awards, including the Daesang for Album of the Year.

While we can never get tired of their live shows, it's always refreshing to switch out the onstage glitz and glam for a dance performance in its truest form. After all, it only reminds us of all the work BTS have put in in order to deliver the best performance for all of their fans – an effort that brought them a lengthy list of record-breaking moments and new milestones.

In keeping up with the 'Dynamite' tradition of mixing things up, the choreography version made its debut on the Main Stage of Fornite's Party Royale.

BTS' latest album, BE, is out now. Find out more here.