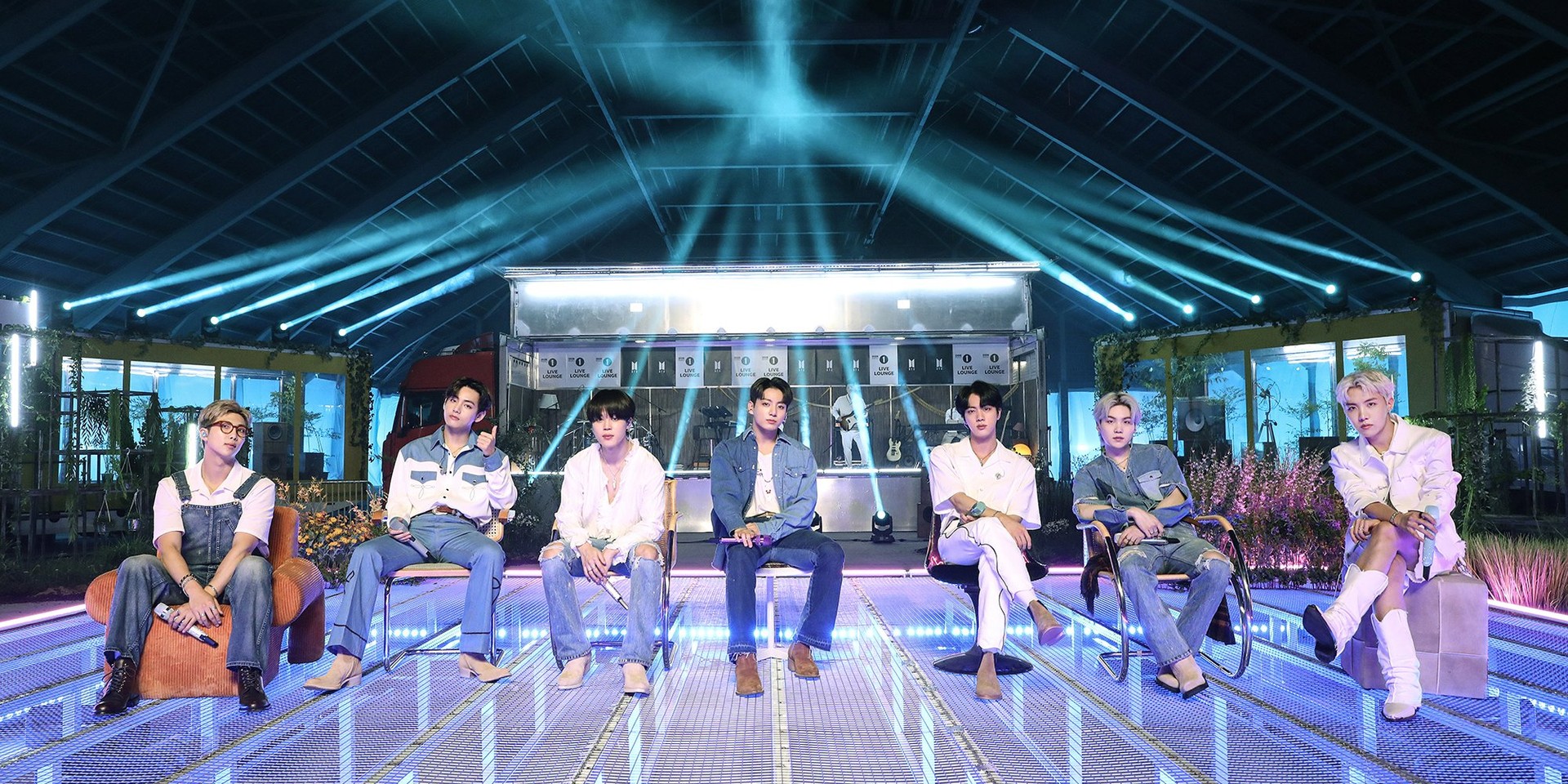 Hosted by British radio station BBC Radio 1, the stage has previously seen performances from the likes of Leona Lewis, Harry Styles, Paramore, Rihanna, and more. Today (27/07), the global pop group graced the coveted stage with their live band, Ghost, to perform a cover of Puff Daddy, Faith Evans and 112's tribute to the late Notorious B.I.G. - 'I'll Be Missing You' - alongside their Billboard Hot 100 hits 'Dynamite' and 'Permission To Dance'.

OK @bts_twt this is perfect 🥺

how good does 'Dynamite' sound in the Live Lounge?!#BTSLiveLounge pic.twitter.com/yqirWtvakG

✨ we don't need permission to watch this clip 1,000 times over ✨@BTS_twt performing 'Permission to Dance' sounds SO GOOD in the Live Lounge 💜 pic.twitter.com/rnGg3qc5z0

When asked why they chose to cover 'I'll Be Missing You,' RM shared: "The lyrics and vibe felt so right for us. We wanna say that we miss all of you… everyone. A message to all ARMYs around the world."

Jimin, V, Jin, and Jungkook showcased their beautiful harmonies (plus Jin's note change in the ending, as well as Jimin's soaring vocals), while RM took over Puff Daddy's (Diddy) verses. Adding their own BTS flavour to the rendition, SUGA and J-hope added Korean rap verses about the challenges they're facing in this pandemic, along with a promise to ARMY: "Whenever it may be, Here’s hoping we meet again, I promise."

Get to know Ghost, the live band behind BTS

Check out the added verses translated in English here:

We’re now used to our routines taken away

But we still can’t give up living on

Hope an end comes for this tiring pandemic virus

Negative thoughts can sometimes be a minus

When that day comes, will say “hi” like nothing happened

I hate this world, our traces become memories

I just empty my mind, trust without conditions

We miss U, baby

Whenever it may be

Ghost band keyboardist Docskim took to Twitter to share his thoughts on reworking the song to fit BTS and making sure to pay tribute to both 'I'll Be Missing You' and 'Every Breath You Take' by The Police. He also dedicates the song to the memory of his late mother.

When I was re-arranging “I’ll Be Missing You” for @BTS_twt, I had a lot of concerns about how to make it modern while still paying homage to both original songs.

So happy and honored that it’s being received well 🙏

Meanwhile, Ghostband drummer khaN posted on Instagram saying how he's grateful to have the chance to perform and play with the band again despite the current pandemic.

Guitarist Soowan, an original member of Ghost band who has worked with the likes of AKMU, Red Velvet's Joy, Seventeen, and more, also shared what an honour it was to grace the Live Lounge stage.

The group's appearance on the Live Lounge comes months after their performance on MTV Unplugged last March, in which the GRAMMY-nominated act performed a cover of Coldplay's 'Fix You', and 'Telepathy', 'Blue and Grey', 'Life Goes On', and 'Dynamite' off of their 2020 album, BE.

BTS most recently dropped their single 'Permission To Dance' which debuted at No. 1 on Billboard's Hot 100 chart, earning the group their 5th top Hot 100 hit.

Watch the band catch up with @AdeleRoberts in new show 'BTS @ Radio 1' on @BBCOne & @BBCiPlayer from 10:35pm TONIGHT!

Plus, you get to see their incredible Live Lounge all over again 💜#BTSatRadio1 #BTSLiveLounge pic.twitter.com/dTZqrqhqTe

Watch BTS' performance of 'Dynamite,' 'Butter,' and 'I'll Be Missing You' by Puff Daddy, Faith Evans, and 112 here.