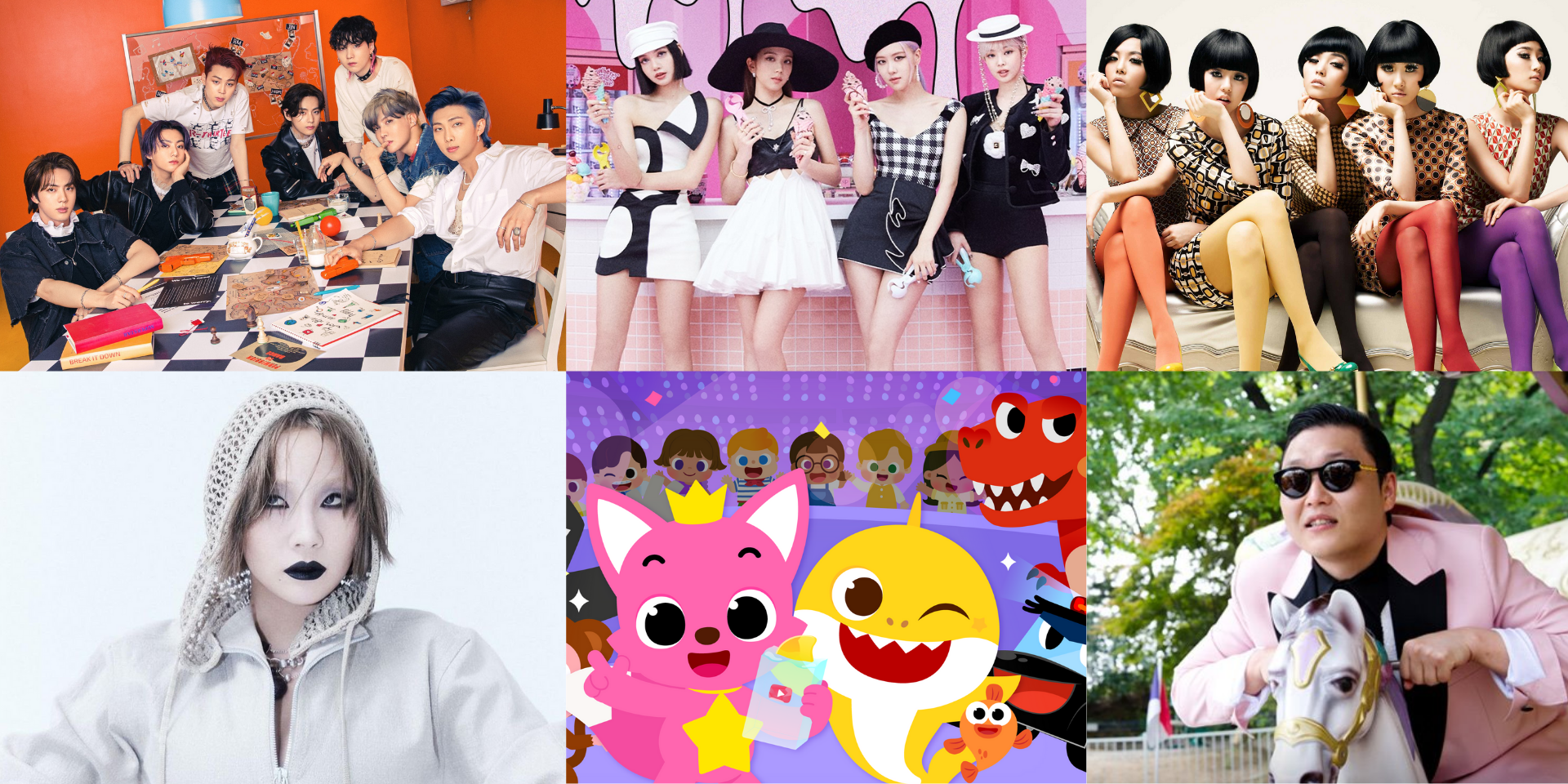 Korean superstars BTS just spent 8 consecutive weeks on top of the Billboard Hot 100 chart, simultaneously making history as the first Asian act to do so and being the only group ever to have had multiple number 1 debuts.

The Billboard Hot 100 chart is the music industry standard chart in the United States for songs, which are published weekly by Billboard magazine. The ranking of songs is tabulated based on physical and digital sales, radio airplay, and online streaming. It's considered as one of the important guides in determining the success of singles released and the chart is an attestation of an artist's audience and their potential in the US market.

Entering the Billboard Hot 100 as an Asian artist is not an easy feat. Dominated mostly by Western artists, it is a remarkable accomplishment that a few Asian artists have achieved.

Let’s take a look down memory lane and see some of the Asian acts who have landed a spot on the Billboard Hot 100 chart:

Japanese crooner Kyu Sakamoto made history as the first Asian artist to top the Billboard Hot 100 with his Japanese single, ‘Ue o Muite Arukō'. Considered as one of the best-selling singles of all time, the song sung entirely in Japanese sold over 13 million copies globally. While the lyrics had no connection to the famous hot pot beef dish, the track was named 'Sukiyaki' in English-speaking countries because of the Western market's familiarity with the Japanese dish.

Wonder Girls broke into the K-pop scene in 2007 and made their way to America in 2009 with the US release of their single, 'Nobody'. The catchy retro-pop track charted at number 76 on the Billboard Hot 100, making the JYP Entertainment act the first-ever Korean group to enter the chart.

The top-selling track has been released in four different languages - Korean, English, Japanese, and Mandarin Chinese.

"Oppa, Gangnam Style!" Everyone knows this song and its signature dance moves. Written and performed by South Korean rapper PSY, 'Gangnam Style' and its now-iconic music video went viral in 2012, with the single debuting at number 64 and eventually peaking at number 2 on the Billboard Hot 100. The track, which has influenced pop culture worldwide and spawned countless internet memes, also topped iTunes charts in over 30 countries.

The music video was the first-ever YouTube video to reach 1 billion views on the platform, an unheard-of feat at that time. Since then, 'Gangnam Style' has amassed over 4 billion views and continues to be discovered by fans who are getting into the Hallyu Wave.

PSY would go on to repeat similar success with his 2013 follow-up single ‘Gentleman’, which peaked at number five. In 2014 and 2015, The rapper would go on to make two appearances in the next two years with a Snoop Dogg collaboration titled ‘Hangover’, and ‘Daddy’, a collaboration with CL.

While South Korean rapper CL's first Hot 100 appearance was with PSY for their 2015 collaboration 'Daddy,' the former 2NE1 member would return on her own with her first American single, 'Lifted'.

The song debuted at number 94 on the Hot 100 in October 2016, marking CL’s first entry as a lead artist and second overall on the chart. With ‘Lifted’, CL made history by becoming the first female Korean solo artist to appear on the Billboard Hot 100.

South Korean educational technology company Pinkfong's viral hit 'Baby Shark' debuted at number 32 on the Billboard Hot 100 in January 2019. Spurred by a viral challenge titled ‘Baby Shark Challenge’, the children's fave is considered as the “next big thing” after the influence of ‘Gangnam Style’.

These videos attracted thousands of viewers and Red Velvet has also joined in the trend by dancing as well, which spread rapidly across the world. To date, it has garnered over nine billion views, holding the record for the most viewed video on YouTube.

The influence of 'Baby Shark' knows no bounds as it was recently confirmed that Nickelodeon and Pinkfong will produce a full-length animated film based on the viral hit.

“Pen-Pineapple-Apple-Pen!” You may have heard these lyrics back in 2016, where the song spawned several parodies online and gained attention in mainstream media.

‘PPAP (Pen-Pineapple-Apple-Pen)’ debuted as a music video in August 2016 by Pikotaro, a fictional singer-songwriter created and portrayed by Japanese comedian Daimaou Kosaka. The song entered the Hot 100 at number 77 and it became the shortest song to chart in its history at that time with 45 seconds in length until it was beaten by ‘Beautiful Trip’ by Kid Cudi with a length of 37 seconds in December 2020. The milestone also makes Pikotaro the first Japanese act since Kyu Sakamoto to break into the Hot 100 chart.

In 2020, ‘PPAP’ received a remix titled ‘PPAP-2020” as a public service announcement for the COVID-19 pandemic. In the video, Pikotaro demonstrates washing his hands with soap and wash his hands while repeating “Wash! Wash! Wash! Wash!” At the end of the video, he tells the viewers to “Pray for People And Peace.”

J-hope of BTS made his first solo appearance on the chart with his take on Webstar and Young B’s ‘Chicken Noodle Soup’, a collaboration with American singer Becky G.

The rapper’s trilingual single, which contains English, Korean and Spanish lyrics, debuted at number 81 in October 2019, and it made him the first member of BTS to land a solo hit on the chart.

BTS member SUGA's alter-ego Agust D released his second mixtape titled D-2 in May 2020. The lead track ‘Daechwita’ debuted at number 76 on the Hot 100 chart. With 'Daechwita' and D-2 appearing on the Hot 100 and Billboard 200 charts in the same week respectively, Agust D became the first Korean solo artist to appear simultaneously on both charts. The single also made Agust D the first solo Asian act to reach #1 on iTunes charts in over 100 countries, following Adele's 'Hello'.

BLACKPINK's Rosé made waves with her smash debut single ‘On the Ground’ from her solo single album R. Its official music video also broke several YouTube records for a Korean solo artist including most-watched premiere and the most views within 24 hours for a music video, gaining 41.6 million views beating PSY's 36 million views for 'Gangnam Style'.

‘On the Ground’ debuted at number 70 on the Hot 100 in March 2021, becoming the highest-charting song by a Korean female soloist. The song attained two Guinness World Records: Rosé became the first artist to reach number one on a Billboard Global chart as a soloist and as part of a group, and she holds the record for the most views within 24 hours for a music video by a K-pop solo artist.

BLACKPINK made its chart debut with ‘Ddu-Du Ddu-Du’, peaking at number 55 in June 2018. The song broke the record for the highest-charting song by a Korean girl group on the Hot 100, previously held by Wonder Girls’ ‘Nobody’. The group then made three more appearances with ‘Kill This Love’, ‘Lovesick Girls’, and ‘How You Like That’, with the latter reaching number 33, the highest of their singles as a group.

BLACKPINK also collaborated with international female pop stars Dua Lipa, Lady Gaga, and Selena Gomez on ‘Kiss and Make Up’, ‘Sour Candy’ and ‘Ice Cream’ respectively. ‘Ice Cream’ gave the group their highest entry on the chart, with the song debuting and peaking at number 13.

Undeniably the biggest pop group in the world right now, BTS has attained 22 entries on the Billboard Hot 100, the most for a Korean act.

The group then made more appearances with collaborations with Nicki Minaj, Steve Aoki, Halsey, and Lauv on ‘Idol’, ‘Waste It on Me’, ‘Boy With Luv’, and the remix of ‘Make It Right’, before reaching their first-ever number-one debut and Hot 100 hit with ‘Dynamite’ in August 2020 and maintaining the top position for three weeks.

BTS went on to receive their second number one in the next month with a remix of ‘Savage Love (Laxed - Siren Beat)’, a collaboration with Jawsh 685, and Jason Derulo. Three months later, when BTS released their album BE, they managed to land seven entries from the album on the Hot 100, including lead single ‘Life Goes On’ which gave them their third number one - making history as the first Korean-language song to top the Billboard Hot 100 chart.

This year, the group achieved their fourth and fifth number ones with their English-language singles ‘Butter’ and ‘Permission to Dance’. ‘Butter’ debuted at number one on the chart in June 2021, giving BTS its fourth number one in under nine months.

BTS are currently the only group in history to have multiple Billboard Hot 100 number 1 debuts - 4 songs: 'Dynamite,' 'Life Goes On,' 'Butter,' and 'Permission To Dance'.