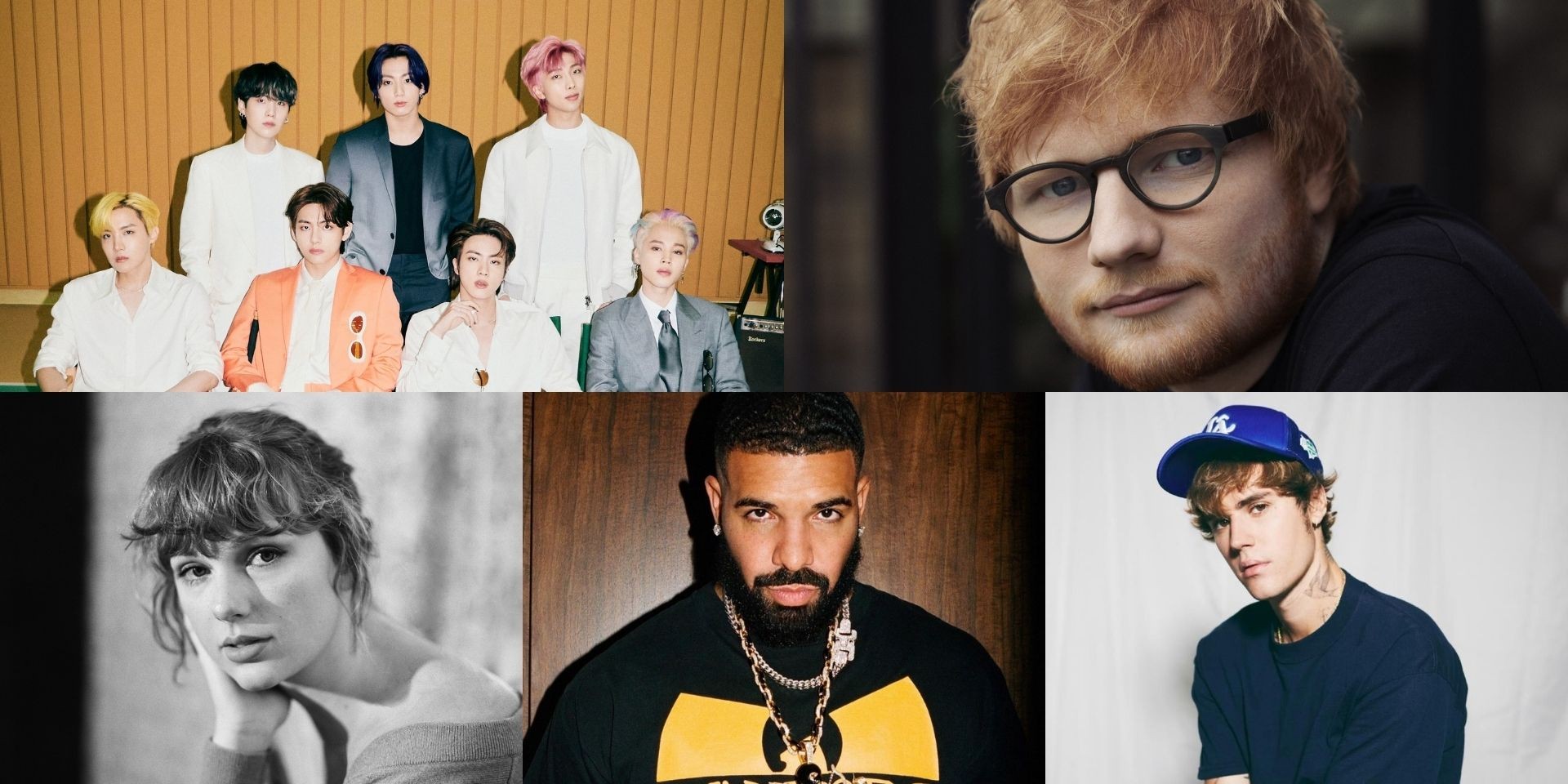 The era of streaming is marked by astronomical numbers and records that are constantly being broken every other day. The latest crowning achievement would be BTS’ newest smash hit ‘Butter', which made the biggest Spotify debut and music video premiere on YouTube. Overtaking the likes of Ed Sheeran, Justin Bieber, and Taylor Swift, the South Korean act have cemented themselves as the kings of streaming.

To put the global superstars’ accomplishments into perspective, here’s a rundown of the top ten Spotify debuts of all time.

The second English-language single from BTS, ‘Butter’ attained phenomenal success immediately upon release. On 21 May, the single racked up over 11 million filtered streams on Spotify, becoming the biggest global debut on the platform’s history and surpassing the group’s personal record set by 2020’s ‘Dynamite’.

‘Butter’ also broke numerous other streaming records. In less than 15 minutes, its accompanying visual hit 10 million views to become the fastest music video premiere on YouTube. The song shattered another ‘Dynamite’ record to become the biggest YouTube single-day debut of all time, scoring over 108 million views in 24 hours.

The Grammy-nominated group performed ‘Butter’ live for the first time at the 2021 Billboard Music Awards (BBMAs), where they also clinched the fan-voted Top Social Artist honour for the fifth year in a row.

‘I Don’t Care’ was a collaborative single released by pop powerhouses Ed Sheeran and Justin Bieber for the former’s 2019 album, No.6 Collaborations Project. Prior to ‘Butter’, the song held the record for the biggest Spotify debut with 10.98 million streams.

‘I Don’t Care’ also previously scored the most number of single-day streams for a non-holiday song, until Olivia Rodrigo’s ‘Drivers License’ broke the record with 13.7 million daily streams in January 2021. Interestingly, despite the streaming success of ‘I Don’t Care’, the single was ultimately blocked from reaching number one on the Billboard Hot 100 by Lil Nas X’s viral hit ‘Old Town Road’.

‘Nonstop’ was a single from Drake’s 2018 album, Scorpion. Ranking third in the biggest all-time Spotify debuts, the song garnered 9.29 million streams on its first day, surpassing Taylor Swift to set a new record at that time.

Another cut from Scorpion, ‘Survival’ ranks fourth with a debut of 8.61 million streams on Spotify’s global chart. Taken together, Scorpion attained a grand total of 132 million plays within 24 hours of release, smashing Spotify's record for most album streams in a single day.

As of January 2021, Drake became the first artist to surpass 50 billion Spotify streams, according to Variety. The rapper, who was just honoured as Billboard’s Artist of the Decade, is also Spotify’s most-streamed artist of the 2010s.

‘7 rings’ was the lead single from Ariana Grande’s fifth studio album, thank u, next. It debuted on Spotify with 8.55 million streams, and also broke the weekly record with 70 million hits on the platform within its first week of release. According to the International Federation of the Phonographic Industry (IFPI), ‘7 rings’ was the fifth-best selling single of 2019, with 13.3 million units sold.

‘7 rings’ also debuted at the top of the Billboard Hot 100 chart, becoming Grande’s second number one single after ‘thank u, next’. With this achievement, the singer joined pop icons Mariah Carey and Britney Spears as the only female artists with multiple number-one debuts in Hot 100 history. It was also nominated for Record of the Year and Best Pop Solo Performance at the 62nd Grammy Awards.

‘HIGHEST IN THE ROOM’ was a single from ‘Sicko Mode’ rapper Travis Scott. With 8 million Spotify streams upon its release in 2019, the song ranks sixth in the biggest Spotify debuts of all time.

The song debuted at number one on the Hot 100, making it Scott’s second number-one single after ‘Sicko Mode’. It received a nomination for Best Melodic Rap Performance at the 2021 Grammy Awards, and a remix featuring Lil Baby and Rosalía was also released in December 2019.

‘ME!’ was the lead single off Taylor Swift’s seventh studio album, Lover. Featuring Brendon Urie of Panic! At The Disco, it debuted atop the global Spotify chart with 7.94 million streams, overtaking Swift’s previous record set by ‘Look What You Made Me Do’.

‘ME!’ also currently holds the record for the biggest single-week jump on the Billboard Hot 100. The single debuted at number 100 and rose to number two within a week, blocked only by then-number one ‘Old Town Road’.

One of the most iconic comebacks in contemporary pop, ‘Look What You Made Me Do’ was the lead single from Swift’s 2017 LP, Reputation. The track racked up 7.9 million streams on Spotify upon release, making it the eighth biggest debut in the platform’s history.

‘Look What You Made Me Do’ also ascended to number one on the Billboard Hot 100 chart, giving the singer her fifth number-one single and ousting Luis Fonsi’s ‘Despacito’ from the top position after 16 weeks.

Arguably the biggest summer hit of 2020, ‘Dynamite’ places ninth on the list with 7.77 million Spotify streams on opening day. The first English-language song from BTS, ‘Dynamite’ was also the group’s first number-one single on Billboard Hot 100. This was also the first time a South Korean act had topped the Hot 100 chart.

‘Dynamite’ also achieved numerous other accomplishments, including the biggest YouTube premiere for a music video with 101.1 million views in 24 hours. Although this record has since been broken by ‘Butter’, it still remains the fastest video by a Korean artist to reach 1 billion views. ‘Dynamite’ also scored BTS their first Grammy Award nomination for Best Pop Duo/Group Performance earlier this year.

‘cardigan’ was the lead single off Swift’s surprise quarantine album, folklore. With 7.74 million Spotify streams on opening day, the song was the biggest debut for a female artist in 2020.