Fresh off their triumphant return to the live stage, BTS held an in-person press conference ahead of Day 2 of PERMISSION TO DANCE ON STAGE in LA.

Answering questions from media, the 'Butter' act revealed their thoughts and feelings about their recent historic Artist of the Year win at the 2021 American Music Awards, their second consecutive GRAMMY nomination for Best Pop Duo/Group Performance, seeing ARMY again after 2 years, and planning more concerts starting with Korea. V: "I'm very happy that we’re having this in-person concert for the first time in two years. For the past two years, “ordinary” and “normal” were no longer normal, so it was a very sad and difficult time for everybody. We really look forward to this concert and are really excited to be here and hope that we can impart some positive energy to all ARMY."

SUGA: "I asked myself "Is this really reality or a dream?" I was really nervous, it’s been a while since we’ve done this. During the concert yesterday, I realized that nothing has been easy for us since our debut 8 years ago and our US debut four years ago. it has been the same for the past two years when we were unable to have a concert and perform. We've overcome every hurdle with our efforts, and we feel that that's what we're best at, facing anything without fear and overcoming them. BTS has always overcome these barriers. I think we will continue to face these barriers and I think that is a strength that BTS has - our ability to overcome these [challenges]. It also hit me yesterday that there will be new challenges, and we'll be able to overcome them again."

"Winning a grammy isn't easy, I'm thankful there are still challenges we can try to work to overcome."

Jin: "This is our first press conference since Wembley, and we're all very excited about this. hope that this will be the first of a series to see our ARMY and hold concerts.  We're hoping to do more concerts around the world and are planning for more concerts in Korea - after this one we have one [concert] in the plan." Jungkook: "We received a lot of love last year as we did this year. This year we created and released songs that tried to express our frustrations as authentically as possible and about the thought and consolation that we hoped to give to people, about how we can overcome the situation together. The fact that we received so much love for these songs that we’ve created gave us a lot of energy, and we hope we can pour in this positive energy that we’ve received in doing these concerts. ARMYs cheers gave us a lot of energy and strength." RM: "Seeing the stadium filled with all the fans got me really emotional, beyond words, finally meeting you, the members of the press, face to face, is so touching and it’s a real pleasure for me."

We had countless shows and awards, but the recent Artist of the Year award at the AMAs and the second GRAMMY nomination was truly something and really did mean something for us. As an artist, we started out in Korea and limitations of our identity, language, genre and invisible walls, we felt like they really existed but every moment we tried to give our best to every show, every performance and every music with all of our hearts and I think those small moments truly made today’s miracle for us. Going back on tour, going back on track and seeing all the fans and people finally in two years it really made us feel like this really is the beginning of our new chapter, and the past two years of the pandemic weren’t easy, not just for us but everyone, including ARMY, the press, for everyone. But today, we’ll try to show how much we’ve grown, how much we’ve learned through these past two years." Jimin: "For the past two years, we felt powerless, we were depressed. We tried to break out of that by doing what we could, releasing our songs “Dynamite” and “Butter,” album “Be” and “Permission to Dance.” Again, doing what we can and trying to find a way out of this situation. We worked hard at this because we wanted to bring healing and consolation to everyone else who was also going through hard times and who are also living through these challenges. So yesterday, being on stage in front of our audience, made me feel like we’re back where we belong and we hope that everyone can find themselves back where they belong." 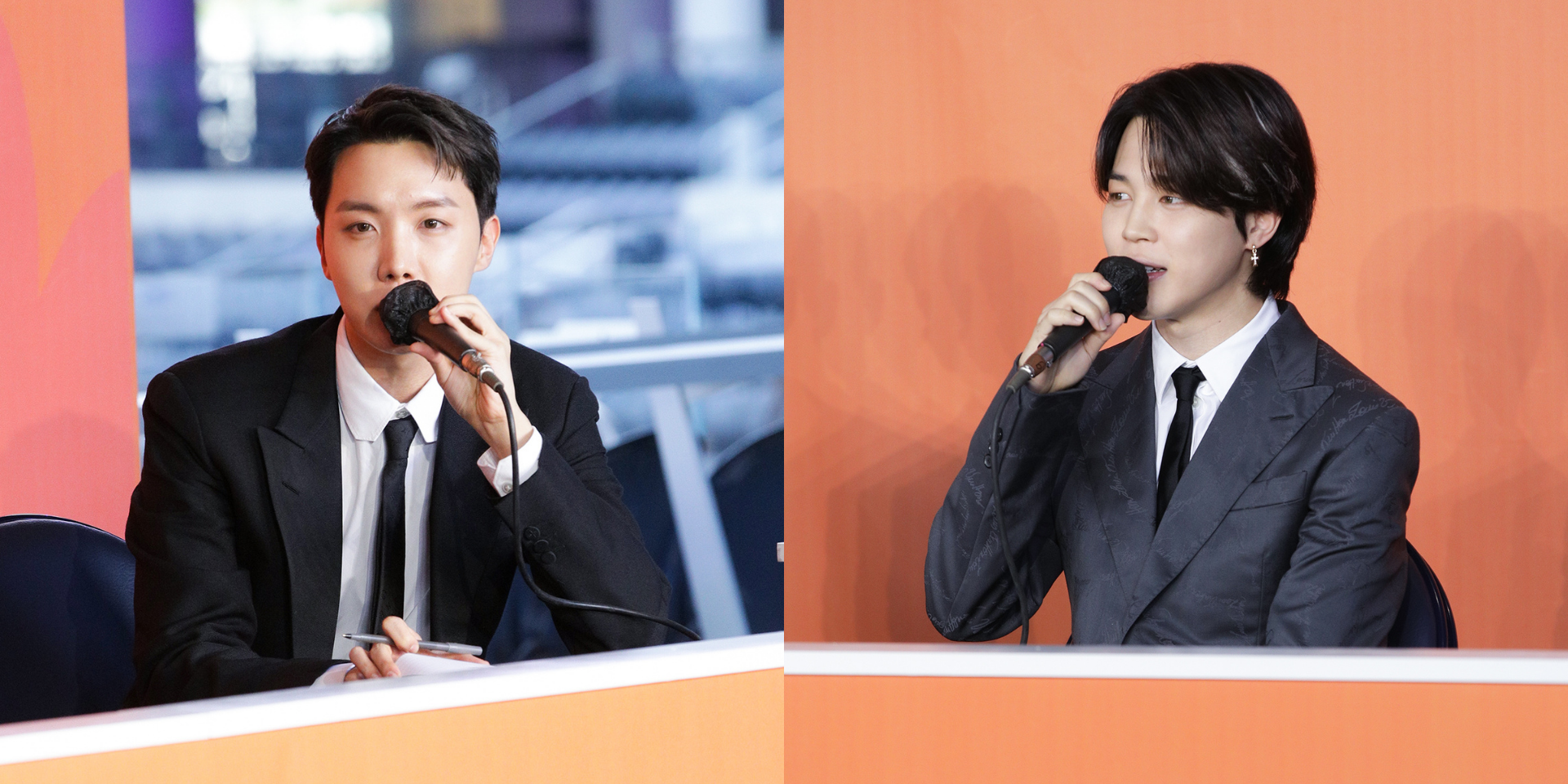 J-hope: "We are back in the US for our concert following our visit to the UN General Assembly a few months ago. Speaking on behalf of an entire generation is a little bit embarrassing when we think of it, but also comes with a great sense of responsibility for certain, and it was a great honour always to create and share with the world the music that we love, and I think this really is the power of BTS. We’ve worked really hard preparing for this tour, because again, we wanted to show that power and the power of our music. This is our first in-person concert in a while and we have fans not just from the US, but from Korea and all over the world, so I hope that you can enjoy this concert together with us, and really let go and release some of the sadness and depressing thoughts that had been weighing down on us for the past couple of years."

BTS also talked about racism and their role in helping address Asian hate. "About Asian hate, we always say this but we have a heavy responsibility. As I said before, I wasn’t born or raised abroad," RM said. "But as an Asian, through the past years and our paths, and our awards, I truly felt the wall, and the wall can’t be always described as words. Sometimes it’s visible, sometimes it’s invisible. So when we talk about Asian hate, our paths are all the awards and our music. We just hope that this can truly help every Asian in the world who live in countries abroad. If there‘s something we can help, or we can be giving of consolations, we are always open and will try to expand our value and stop discrimination."

BTS will continue their PERMISSION TO DANCE ON STAGE concert series on 1 December and 2 December. The last day (3 December at 12:30 PM KST, 10:30 AM JKT, 11:30 AM PHT/SGT) will be livestreamed globally via VenewLive. Find out more here.