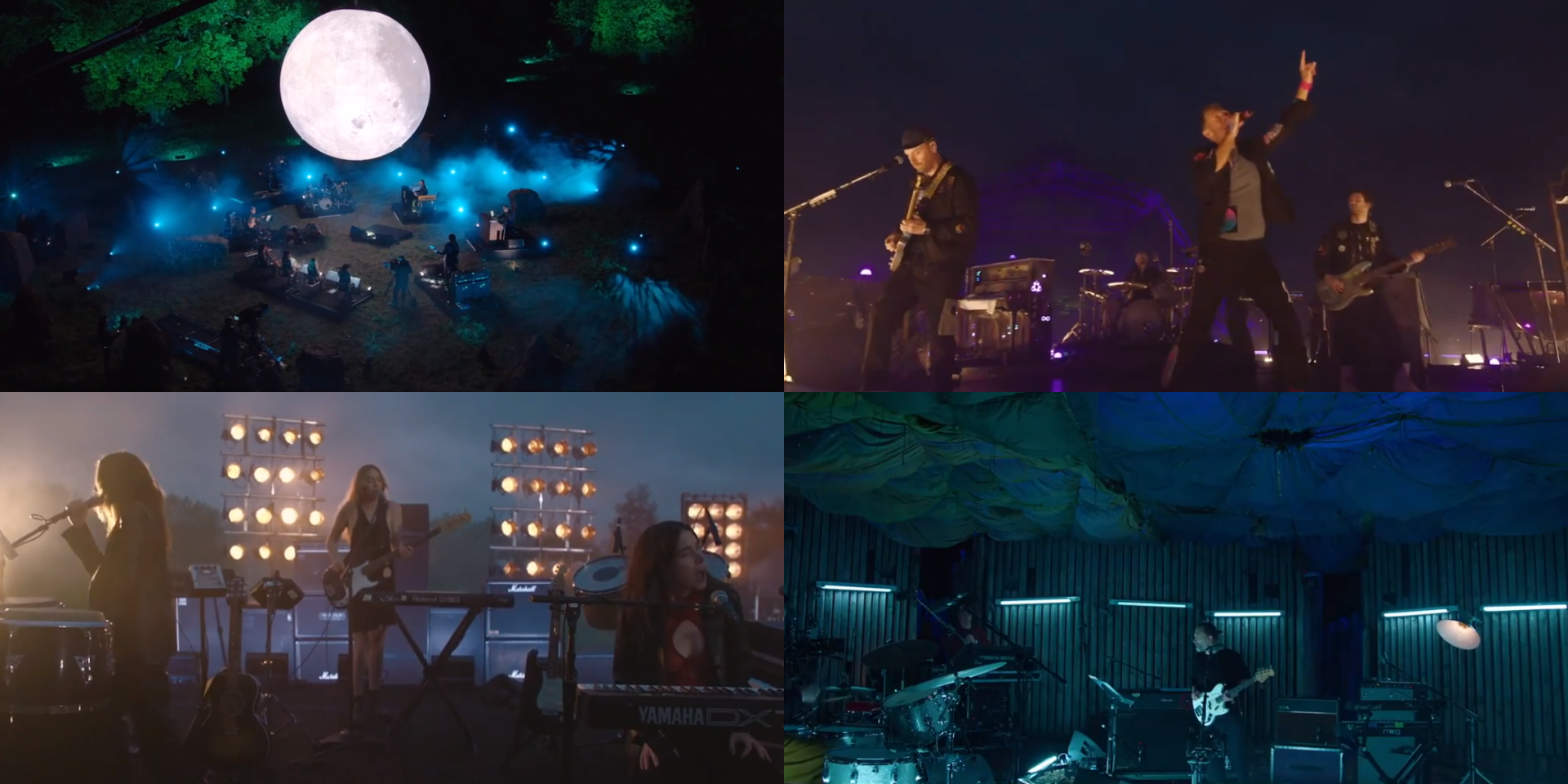 Over the weekend, in a field of cows and lush greenery, Glastonbury happened! While it was minute compared to its grand in-person festivities every year, Glastonbury: Live At Worthy Farm was a continuous rush of enthralling performances and good music.

In place of an in-person Glastonbury, the English festival took place on our screens on 23 May at 5 PM (SGT/PHT), with various showings for audiences all over the world. Coming from the Philippines, it was a treat to tune in to a festival that would usually happen miles and miles away from home.

Shot live from the iconic grass fields of Worthy Farm, the festival was a five-hour-long showcase of pre-recorded performances from a star-studded lineup of acts including Coldplay, HAIM, and a surprise appearance from Radiohead's Thom Yorke and Jonny Greenwood's new band, The Smile.

With a unique set and atmosphere for each performer – be it a junkyard barn or a giant bonfire, the festival had everything you would expect from a live Glastonbury festival, including the rain.

As an interlude, the festival also featured poetry from Kae Tempest, PJ Harvey, and George The Poet, as well as an endearing skit from Kurupt FM from the English sitcom, People Just Do Nothing (there was also a weird fox that ushered us to the late-night performances).

Here are some highlights from Glastonbury: Live At Worthy Farm 2021! 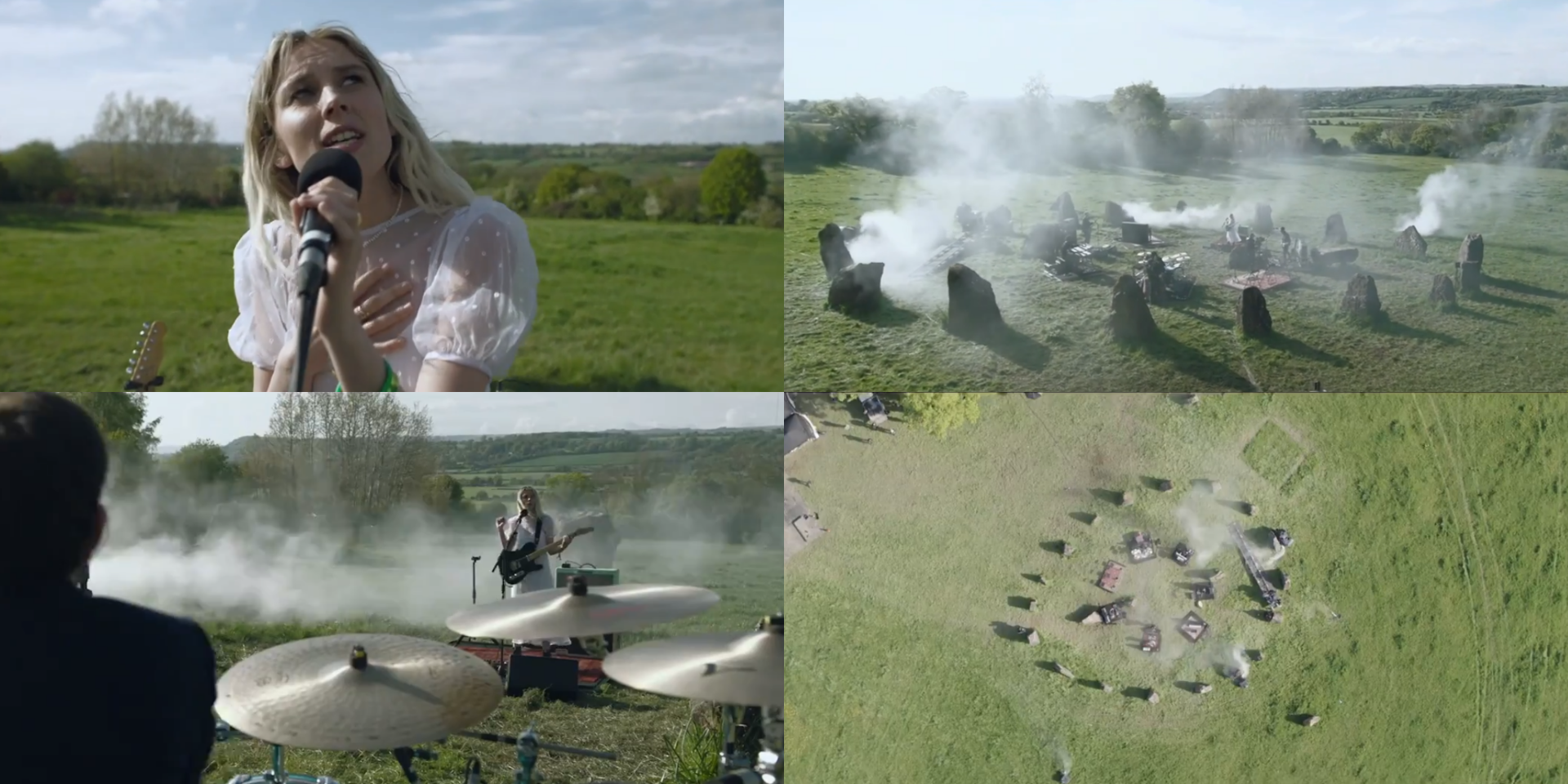 Against the beauty and tranquillity of Worthy Farm's Stone Circle, Wolf Alice arrived in a blaze of smoke, waiting to kick off the festival on a high. Both complimenting and contrasting the scenic view of the farm, the alternative rock band performed a run of tracks that took audiences through a range of emotions, whether it was melancholic nostalgia or rocker rage.

The four-piece band started off with their delicate love song, 'Don't Delete The Kisses' before rocking out to one of their latest singles 'Smile', an energetic track that would be a definite live crowd favourite. In addition to other notable hits like 'Formidable Cool', 'The Last Man On Earth', and 'Giant Peach, Wolf Alice also debuted 'How Can I Be Ok?', a new track from their forthcoming album, Blue Weekend. 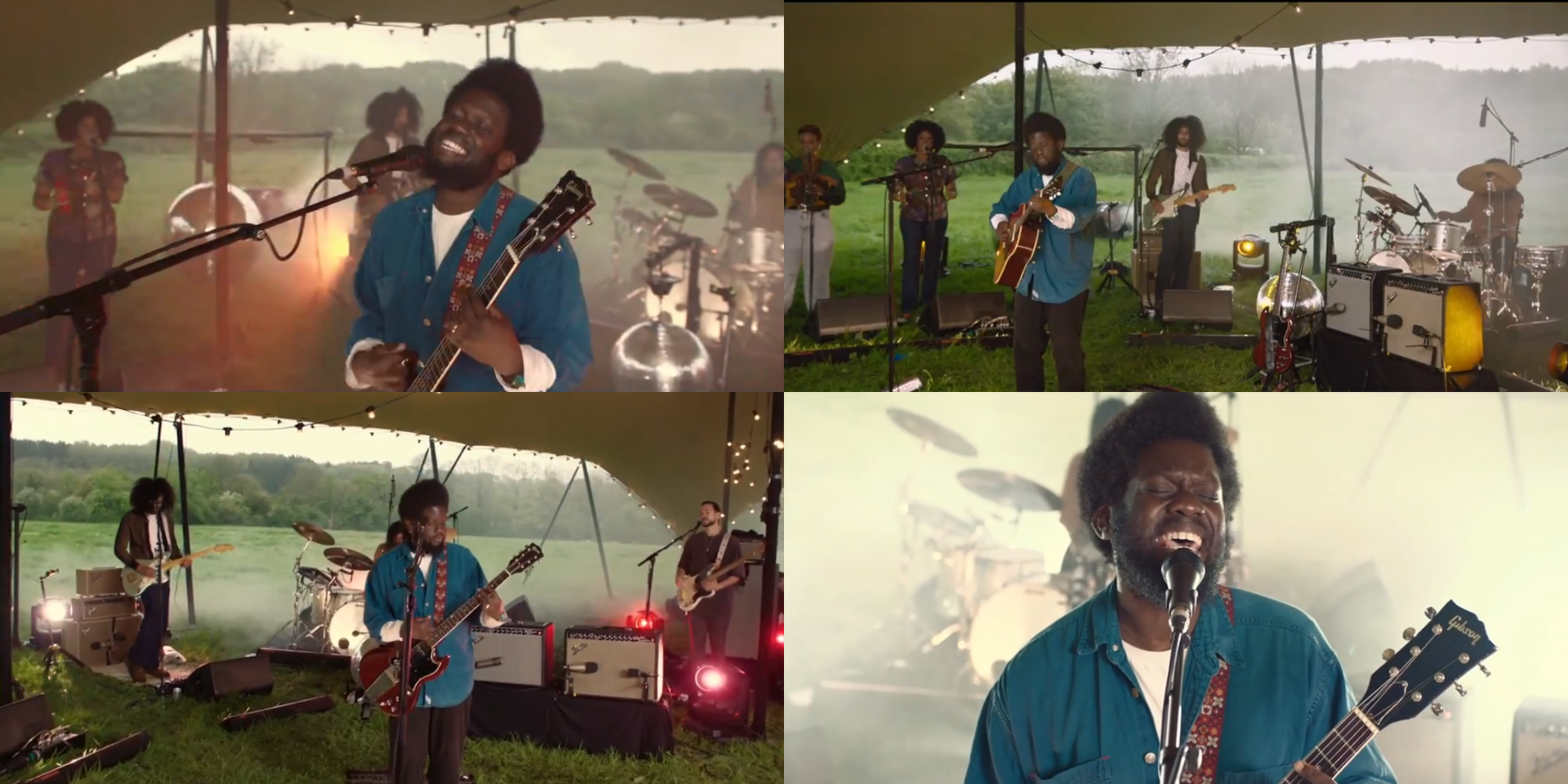 Following the rock outfit was Michael Kiwanuka. While the heavy British rain almost threatened to shut down the entire set, it gave the perfect backdrop to the singer-songwriter's soothing, psychedelic soul sound. Engulfing the entire festival grounds (and our homes) in a comforting yet lively warmth, Kiwanuka performed 'You Ain't The Problem', 'Rolling', 'Hero', and 'Light', all of which are from his most recent album KIWANUKA.

Backed by a choir and a live band, the Mercury Prize winner closed his set with his top hit 'Cold Little Heart' that wonderfully showcased his clear and soulful vocals, setting the stage perfectly for the evening that lied ahead. 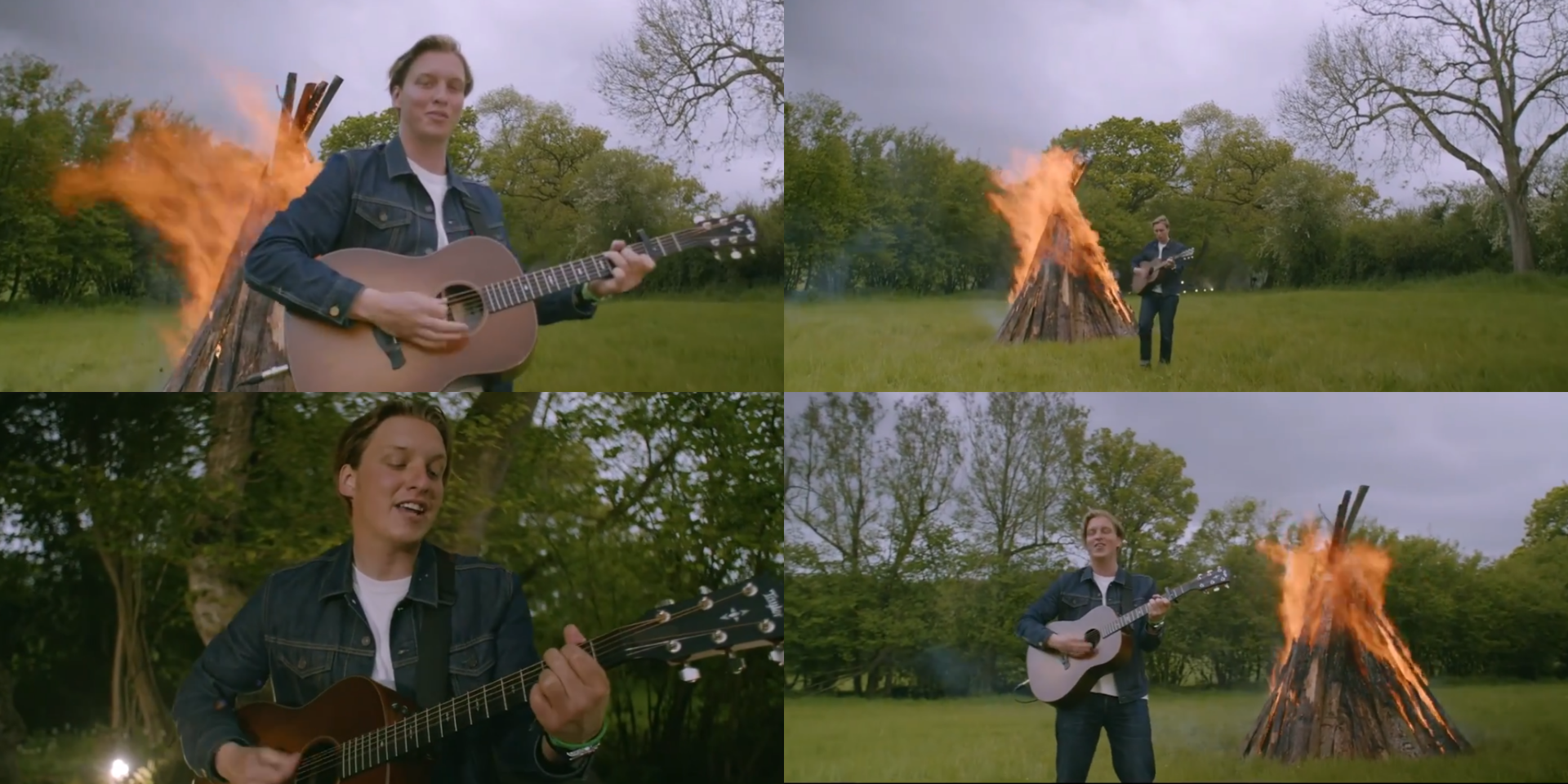 Accompanied by only a blazing bonfire and a guitar, George Ezra gave a stripped-down performance reminiscent of late-night jam sessions on a campsite. Commanding the stage with his bluesy-acoustic voice, the singer-songwriter gave a short 10-minute set that showcased the heartwarming spirit of Glastonbury.

Ezra began his set with his charming, folk track 'Blame It On Me' followed by his uplifting summer anthem 'Shotgun' that despite the gloomy skies felt like a ray of sunshine. Energised and ready for the rest of the festival, the singer bid audiences a farewell with his chart-topping single 'Budapest'. 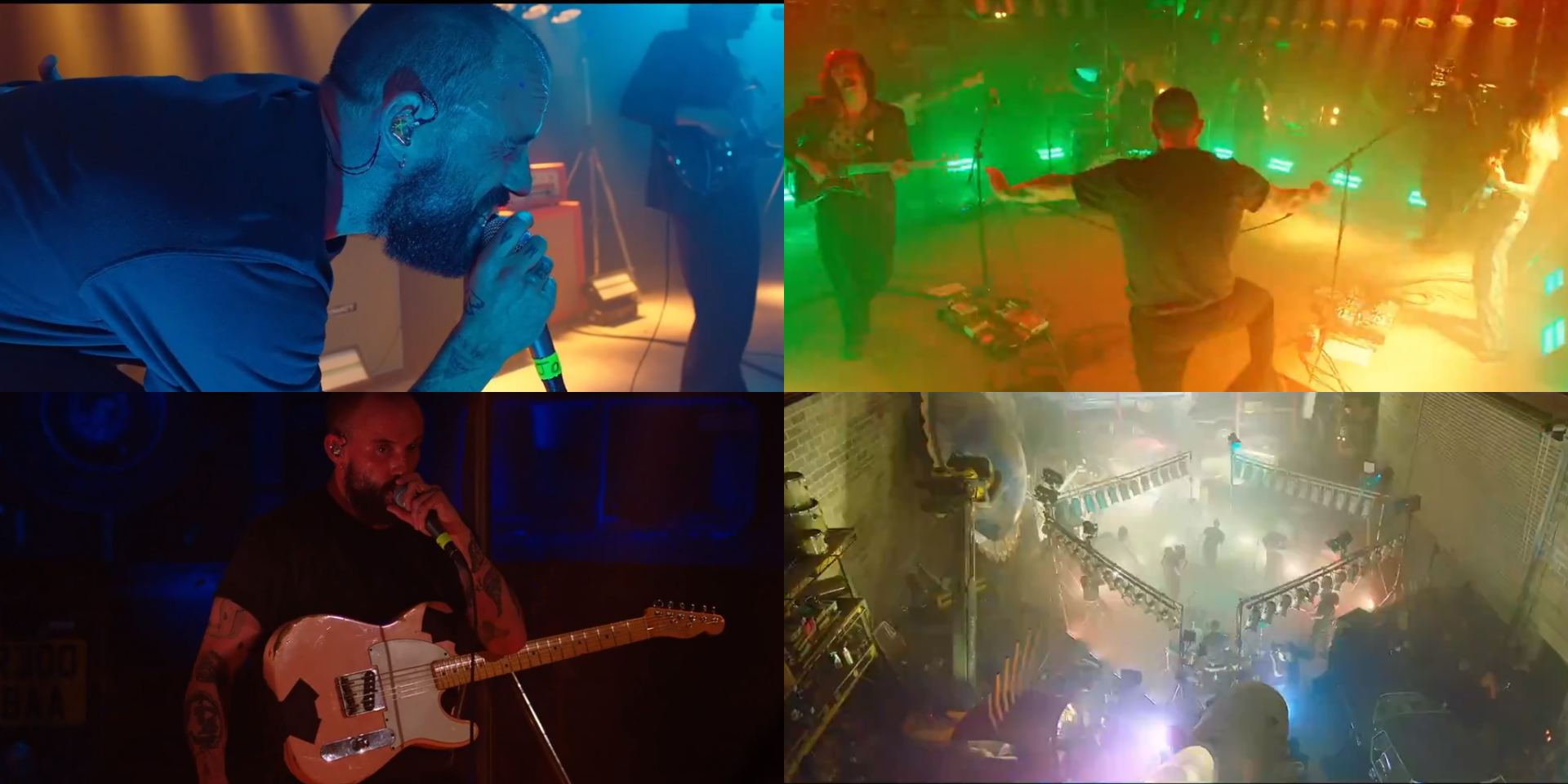 Transporting viewers from the green and scenic farmlands to a grimy junkyard barn, it was time for punk band IDLES to take the stage. Far from the tranquil view of Worthy Farm to a stage similar to that of a boxing ring in a cowshed, the band began their set with sparks flying – literally, there were welders to the side – with their track 'War'.

Despite being a band known to feed off of the live crowd's energy, IDLES still gave a resounding and dynamic performance full of fury and passion as they go through some of their biggest hits like 'Never Fight A Man With A Perm', 'Danke', 'Kill Them With Kindness', 'Anxiety', and more. 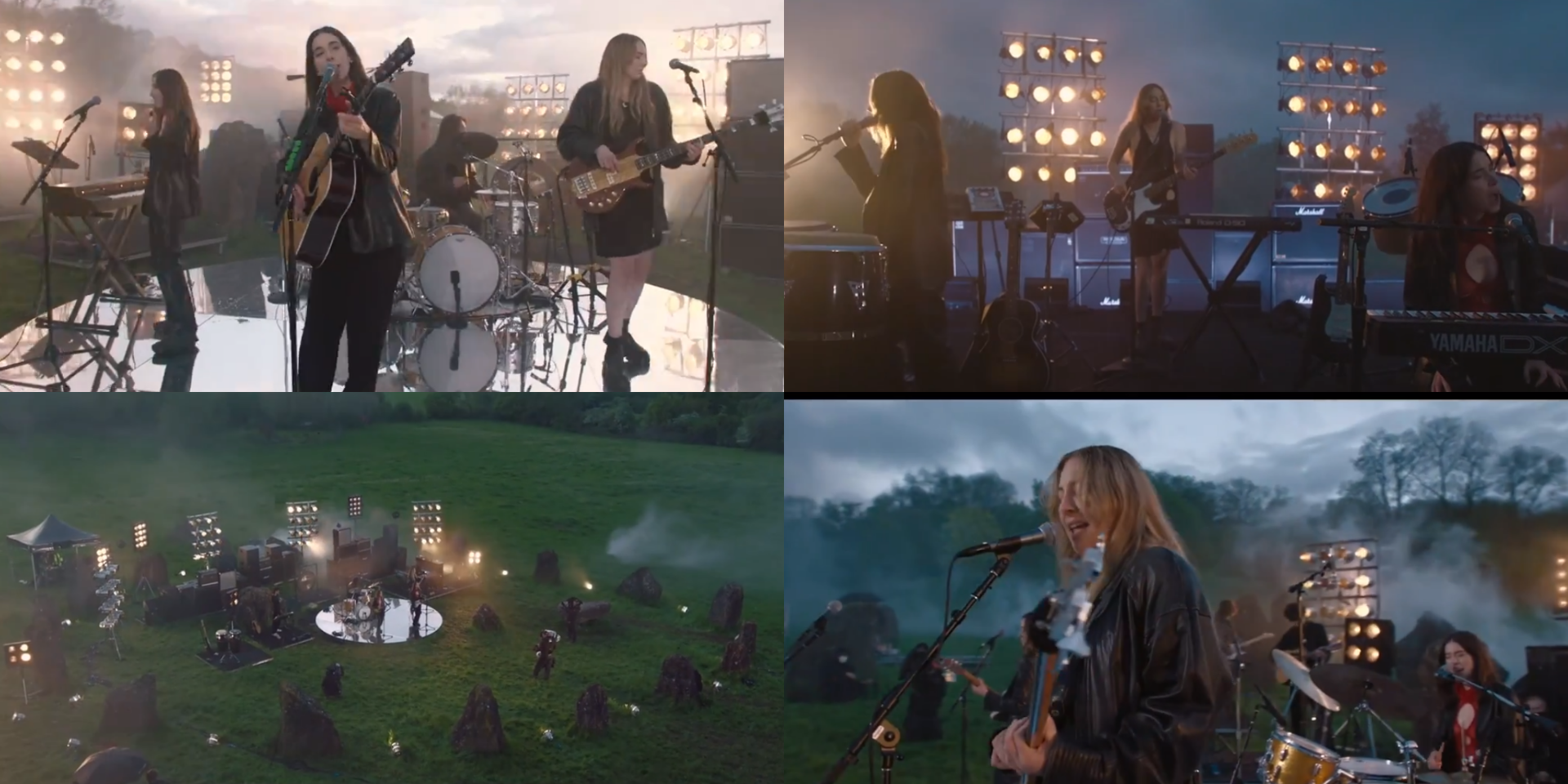 Back to the Stone Circle but this time with the sun setting in the background, HAIM was the next act slated to perform. Bringing their West Coast soft rock to the farmlands, the three-piece band swept audiences away with their country-pop sound. The band greeted the festival with debut performances of 'Summer Girl' and 'Don't Wanna' from their latest album Women In Music Pt. III.

As the sun continues to disappear into the horizon and in between several musical instrument swaps, HAIM ushers audiences into the night with 'Gasoline', 'The Steps', 'Now I'm In It', and more. 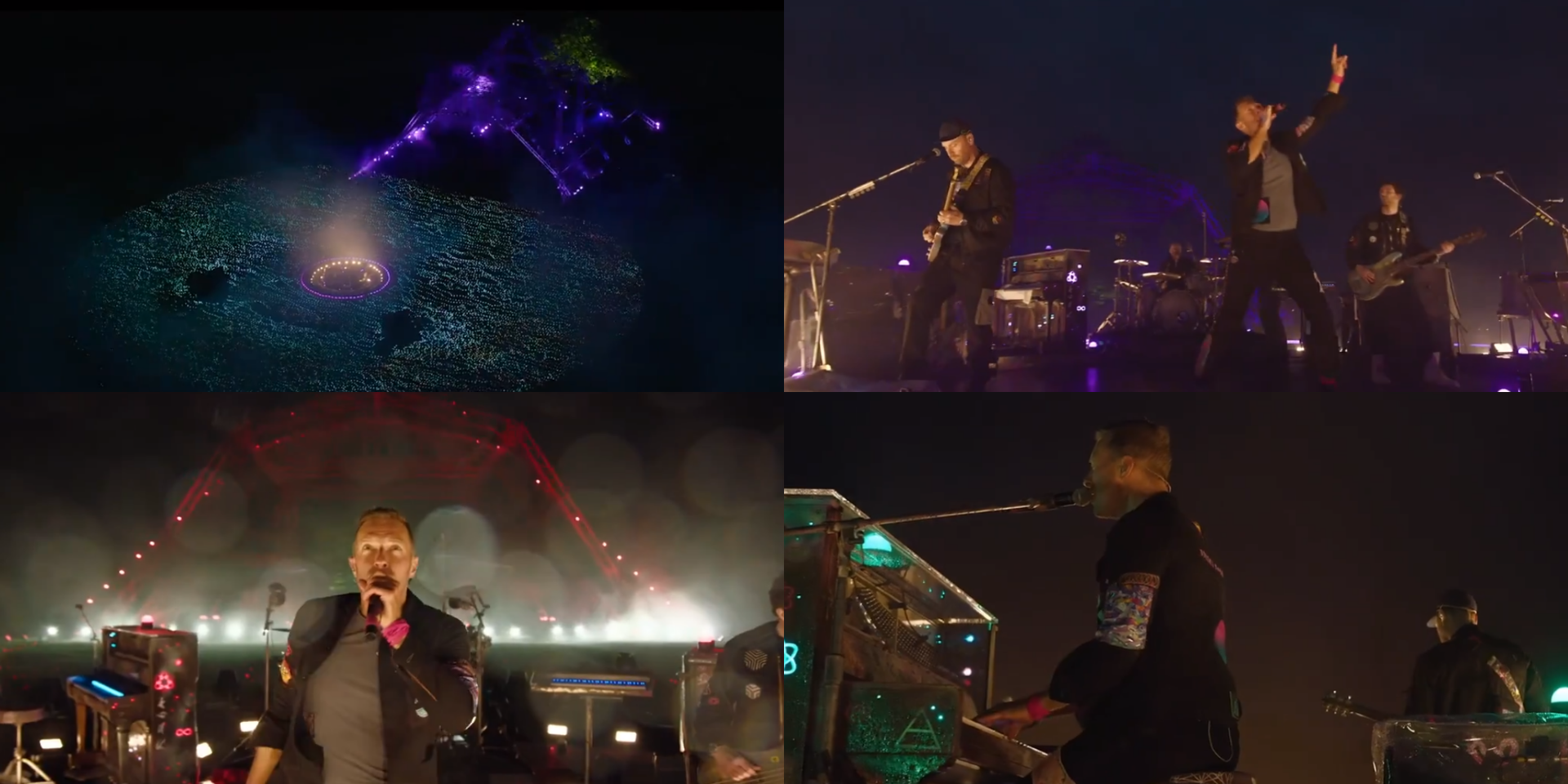 "This is the first time we're playing to a crowd of cows", says Chris Martin in the middle of Coldplay's long-awaited performance at Glastonbury.

After almost five years since their last festival performance, the band return with nothing short of a grand production. Against the skeleton of the iconic Pyramid stage, surrounded by a constellation of glittering lights, Coldplay opened their set with 'Higher Power', accompanied by a not-so-humble fireworks show. The band quickly followed it with a harrowing rendition of 'The Scientist' – a performance that would have been an absolute wonder to see live.

Adding to the Glastonbury experience, the rain started to pour as Coldplay went through their set, performing hits like 'Viva LA Vida', 'Clocks', 'Fix You', and 'A Sky Full of Stars'. "If there’s a day you didn’t want to be standing in a field, it’s today," says Martin. 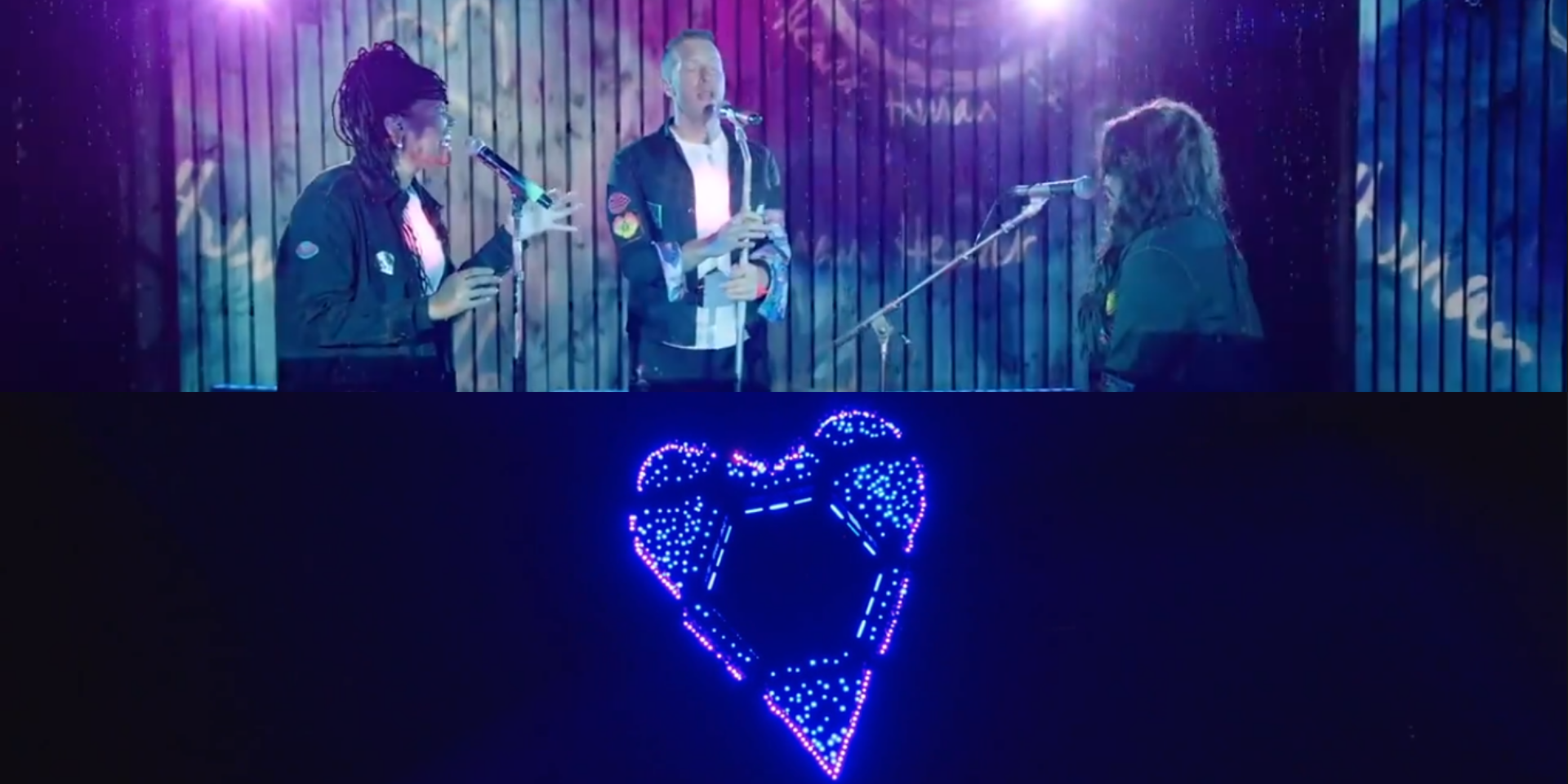 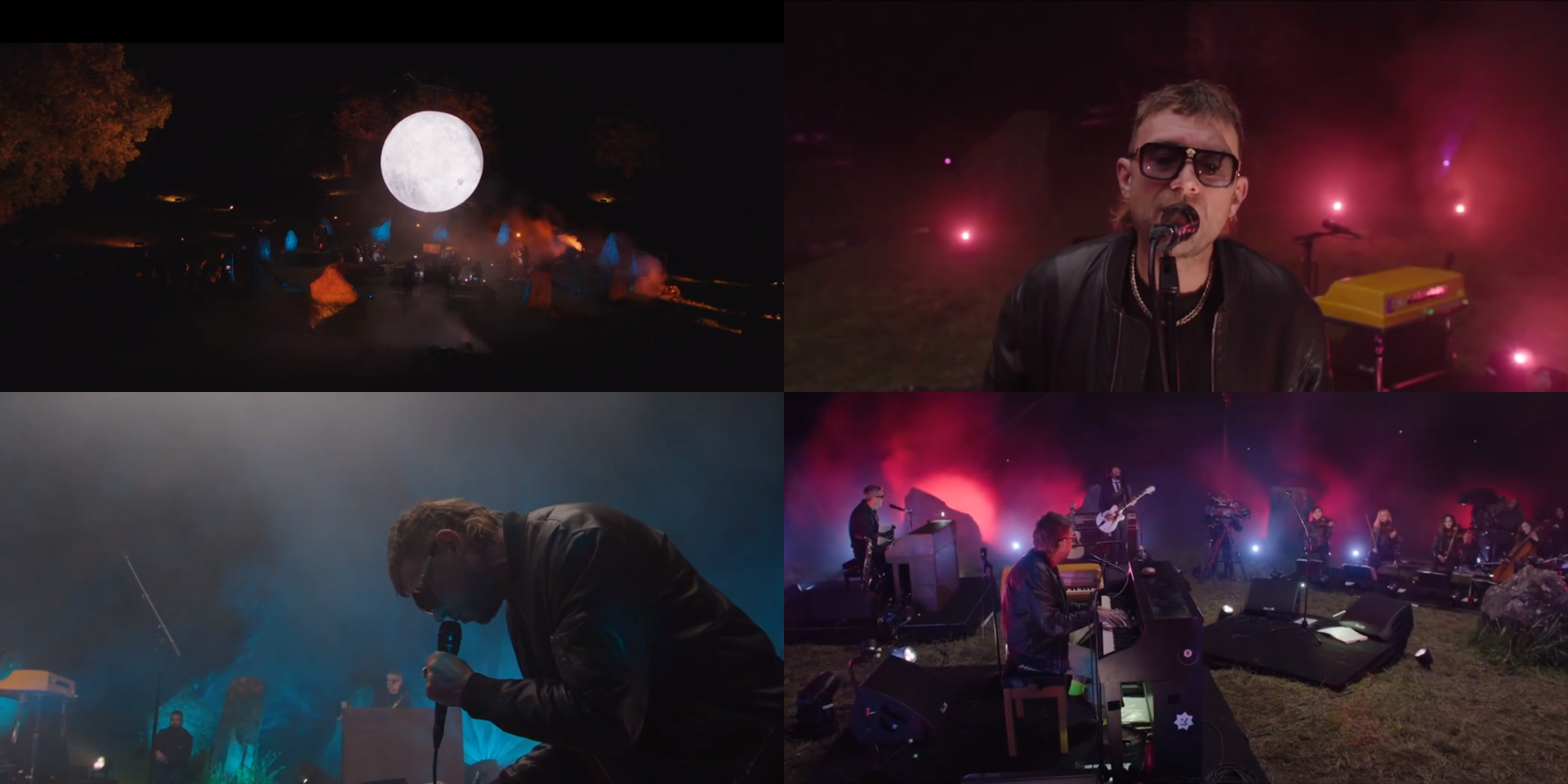 Glastonbury alum Damon Albarn takes the stage next, backed by a band and string section (quite literally) under the moon. Channelling the solitude of the nighttime, the former Blur frontman gave audiences a sombre and serene set as he performs tracks off of his upcoming album, as well as some Blur classics.

In a breeze of jazz piano melodies and echoing strums, Albarn performs tracks like 'Royal Morning Blue', 'Apple Carts', 'Darkness to Light', and 'Polaris', as well as Blur's 'This Is A Low' and 'Out Of Time', The Good, The Bad & The Queen's 'The Poison Tree'. 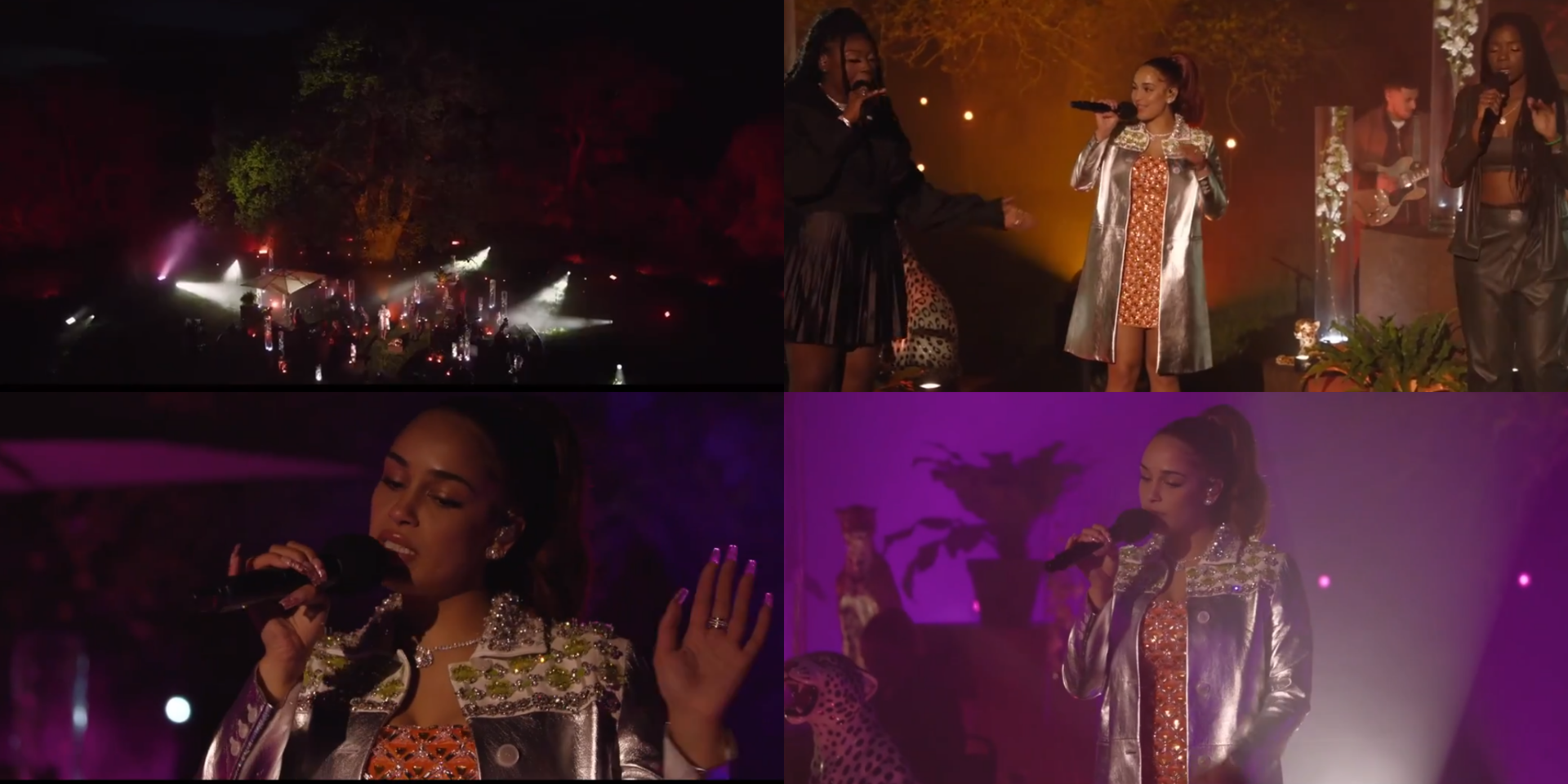 Against the backdrop of a large tree, Jorja Smith steps on stage with her soulful voice and melodious pop-soul sound. With a variety of coloured lights under the vividly blue night sky, the rising R&B star creates a magical setting that's something out of a movie.

Fresh from the release of her album Be Right Back, Smith performs gives audiences enchanting performances of 'Blue Lights', 'Burn', 'Come Over', and more. Before ending her set, she also welcomed British rapper ENNY to perform 'Peng Black Girls'. 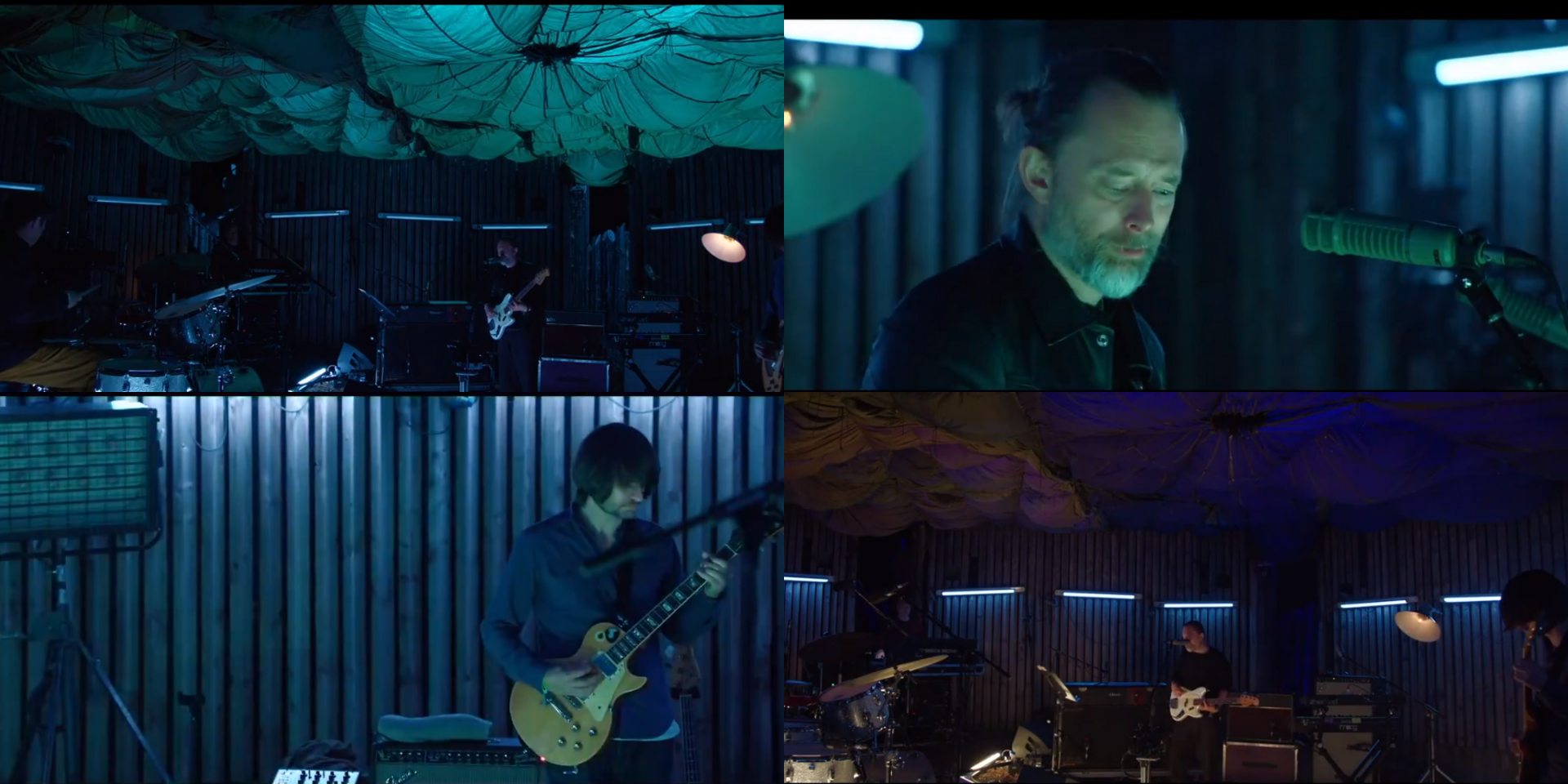 Billed as 'Special Guest' on the festival posters, The Smile came as a surprising treat to audiences all over the world when announced just hours before the livestream. Giving their debut performance at Glastonbury, The Smile is a new band that comprises Radiohead vocalist Thom Yorke and guitarist Jonny Greenwood, and Sons of Kemmet's Tom Skinner.

Introducing themselves to the viewers, Yorke explained, "Ladies and gentlemen, we are called The Smile,” he said at one point. Not the smile as in 'aaah', more the smile of the guy who lies to you every day."

Running through a set of punk enraged tracks, The Smile performed in a metal warehouse, where their performance was often interlaced with blurry footage of the band. The new punk outfit performed 'Skating on The Surface', 'The Smoke', 'You Will Never Work In Television Again', 'Opposites', 'Panavision', 'Just Eyes and Mouth', 'We Don't Know What Tomorrow Brings', and 'The Thing'. 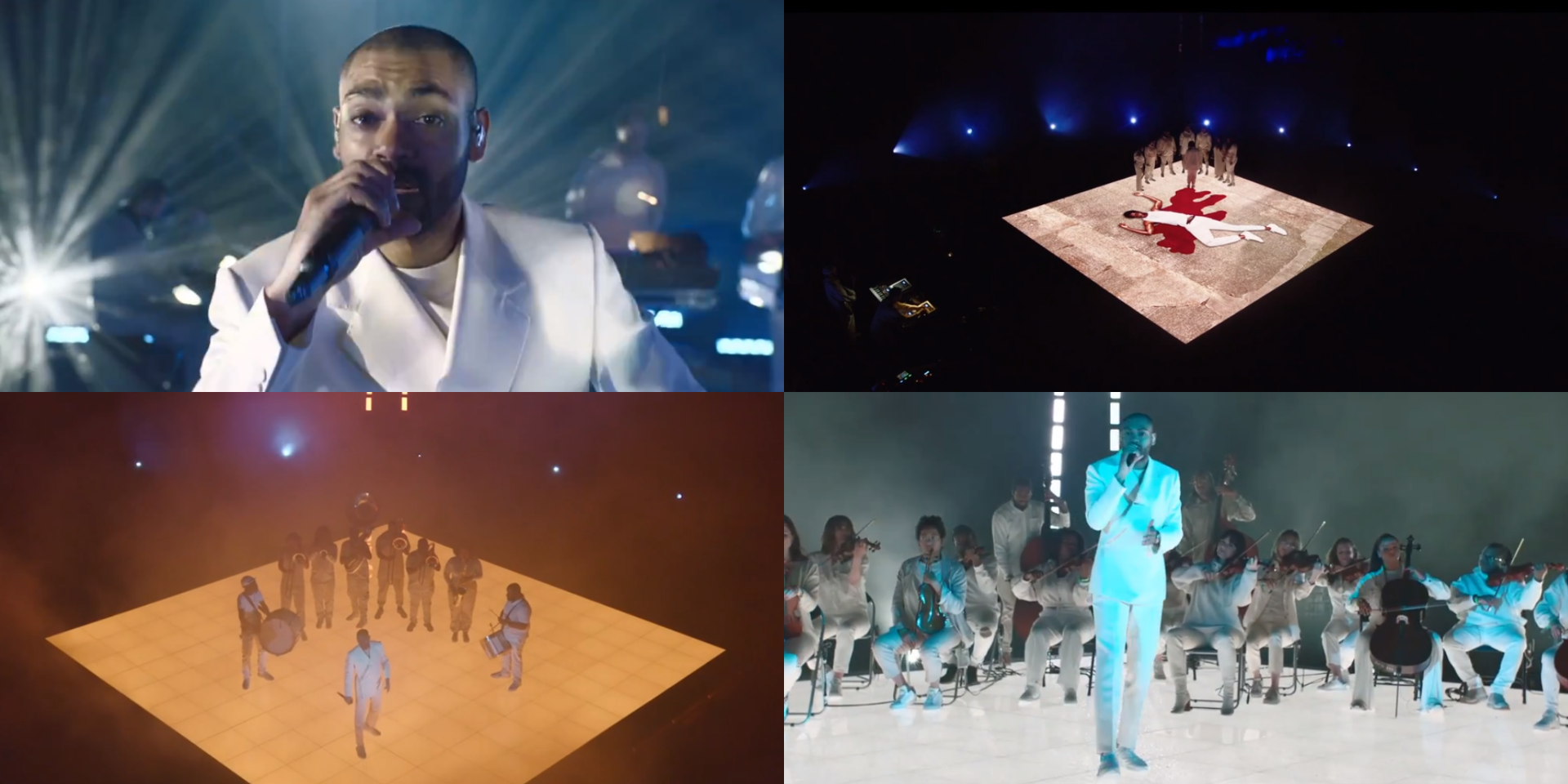 As the night almost draws to a close, we're taken back to the field, greeted by a glowing stage and rapper Kano. Armed with a band and a revolving door of guests, whether it was a choir, a string quartet or fellow English rappers D Double E and Ghetts, Kano keeps the energy at an all-time high with his commanding stage presence and impressive theatrical production.

Under the pouring rain, Kano wraps up the evening with a mix of raving nightclub hits and political statements. Most notably, the rapper delivered a powerful performance of 'Trouble' which featured an emergency call about a stabbing as an image of a bleeding teenager engulfs the stage in a sea of red.

Officially closing the festival is DJ Honey Dijon all the way at the Southeast end of Worthy Farm. Accompanied by Roisin Murphy in a hallowed out bus, the pair send audiences off with a sea of house and disco music, reminiscent of the 2 AM parties that we so dearly miss.