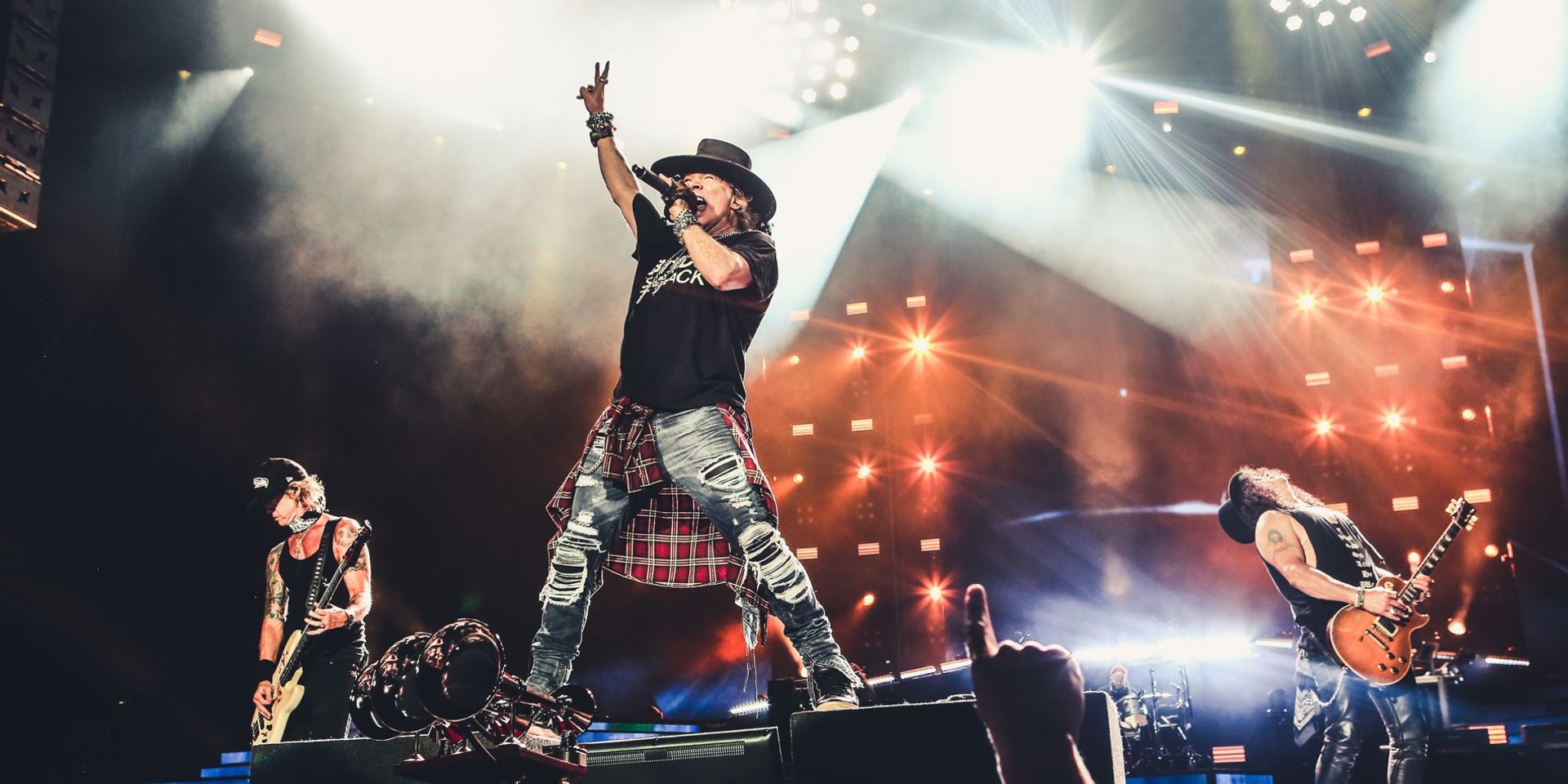 Despite rave reviews over the band's performance, there was a flurry of complaints over the organization of Guns N' Roses' first show in Singapore.

Aimed towards Singaporean concert organizers LAMC Productions, fans were up in arms over the management (or lack thereof) of vehicle and crowd traffic, along with the lack of adequate bars and food stalls to provide for the 50,000-strong crowd.

While grievances have been strong, with an abundance of posts flooding the event's Facebook page and additional reports by Channel NewsAsia and The Straits Times, LAMC have largely kept quiet about the incident, only issuing a statement to assure fans that any unspent credit on their RFID tags — a system utilized for fans to pay food and beverages with — will be refunded.

But in an exclusive interview with Bandwagon, LAMC Productions co-owner Ross Knudson makes no excuses about the mistakes made organizing the event.

He acknowledged some of the stronger criticisms over the event's lack of proper traffic control, and admitted that there wasn't someone to properly oversee everything that happened outside the concert arena. "We hired Roland Beckerle who's done Scorpions to be the production manager, and he did a fantastic job — he did all the technical stuff on stage inside the venue," Knudson explains.

"What I didn't have was his counterpart as the venue site manager, and we had a lot of confusion because there were so many variables and so many pieces of a puzzle to make this venue work."

One of the "pieces" was their newly-introduced system of using RFID tags, bypassing the usual cash transactions at food and beverage stalls. But the process proved to be an inconvenience with the growing crowd. Their system involved staff scanning tickets, and transferring that data onto RFID tags for concertgoers to use.

"At 7pm [an hour before Guns N' Roses were scheduled to take the stage], I went out there and looked and thought to myself "Oh God, there's thousands of people outside!" and I know Axl [Rose]'s not gonna delay the show," Ross says. "I knew that, in one hour, there's no way we can get all these people in."

Ross talked to security and his production team to try and streamline the scanning process, and eventually, they began distributing wristbands to anxious concertgoers in the queue.

"We just got totally bottlenecked with the scanning, it slowed it down and became unmanageable."

But while they managed to devise a fairly satisfactory solution to bring in more people, concertgoers who did receive their RFID tags — topping them up with ample cash — were forced to queue for over an hour to purchase food and drinks. "We should have had a different way of doing it — I wish we had one giant bar serving the whole venue, that would've been better," Ross says.

"That's also another level of logistics we had to deal with, and we didn't put enough time and effort on that."

For concertgoers who were stuck in traffic on Aviation Park Road before the concert, however, Ross claims that the congestion was partly caused by dump trucks in the area, which were allegedly delivering dirt as part of an ongoing land reclamation project near the venue. "We requested that they stopped running [the day before] but they didn't stop," Ross says. "They were out there barrelling away down the road, and they were dangerous — with all these cars and vehicles around."

The road that leads to Changi Exhibition Centre isn't ideal for heavy traffic either, he claims. "Aviation Park Road, there's only one way to get in, and one way to get out," he says. "Last night, we had a lot going on on that road — there were a number of traffic accidents that slowed things down that made it hard for people."

Traffic congestion became a bigger problem after the show, and many concertgoers were left stranded waiting for the line of vehicles to ease up. Ross points to their lack of management of incoming taxis.

"Most of the taxis that arrived at the taxi pick-up zones were on call, and they would just simply park there and wait for the customer," he says. "Our idea was to turn that zone into a Changi Airport-styled taxi queue. When it got clogged up with other taxis who were simply sitting there waiting for their customers, that was a problem. That was something worth anticipating."

It's a phenomenal thing. It's just the logistics of doing it is very, very hard."

As for concertgoers who purchased shuttle bus tickets — many of whom were left waiting for hours — Ross admits that they should have gotten more buses to accommodate the massive crowd.

With over 120 buses and differing destination points, coupled with gestating traffic, it still became difficult to regulate a stream of buses to pick up fans. "Last time, for Metallica, we only used Singapore Expo [as a destination point] for every bus. It was good that we opened different locations and I think that worked out okay. We should've had another 100 buses, that could've helped."

Fans with private vehicles were also left without help as traffic stalled anyone from leaving, and Ross believes that they should have involved the assistance of LTA (Land Transport Authority) personnel, and will do so for future events at the secluded venue.

"I think we need a whole army of "outriders" — LTA, police, motorcycle riders to assist from the entrance, all the way in and on the way out," he explains. "We need someone to make sure people don't get clogged up with the stoplight. Just to have police in the middle directing traffic because the main thing is to get those cars out of Aviation Park Road."

Despite the apparent inconvenience of Changi Exhibition Centre, Ross insists that it's a unique venue for large-scale concerts. "Changi gives us a massive area, and the right kind of facilities — both indoor and outdoor. It's a phenomenal thing," he says. "It's just the logistics of doing it is very, very hard."

Looking back at the show on Saturday, he concedes that a larger management team is essential to run a show at the place — a task beyond his modest staff.

"We all needed one go-to person who was really a strong leader in the venue, and we didn't have that," he admits. "We were using our staff to handle different areas and it became very patchwork — it was like putting your fingers to stop the leaks before it bursts. And that was when it got a bit beyond us."

Speaking over the phone, Ross insisted on making it clear that his team were not deliberately putting on a sub-par show. "There were a lot of issues and we just did the best we could."

But for the company, which turns 16 years old this year, it's evident that they're in need of proper large-scale concert management — while they've been able to satisfy concertgoers with events at Singapore Indoor Stadium and Fort Canning Park, the challenges that Changi Exhibition Centre present requires a lot more precision and focus in the minutiae of logistics.

"I want everyone to have a great time — that's what I want, that's my number 1 goal, to get people out of the venue and they would say that that was the time of their life," he says. "When we don't meet expectations, it disappoints me just as much as it disappoints them. And [co-owner] Lauretta [Alabons] is the same, we don't want to disappoint the fans — we're fans ourselves, that's why we got into this. We're not a faceless corporation to make an excuse and move on."

...we have to keep everyone on the same page, we've got to come up with a standard operating procedure of doing this venue."

— Ross Knudson, on using the same venue in the future.

Ross intends to meet with "stakeholders and everyone, especially Changi Airport who own the property" and figure out how to make the venue more accessible for concertgoers.

"It's got a lot of moving parts that require a lot of staffing, and it's really a military operation to run it," he explains. "In concerts, you only have a short window of time to do it. And you've got to pull it all together and run it to the best of your ability. At the same time, you have to meet your requirements and satisfy the police."

While many concertgoers were left incensed and dissatisfied, Ross claims the band were delighted and impressed by the turnout. "Slash and Duff came up to me and said "Ross that was awesome. It was a great show." They were very, very happy with the show," he says.

"Axl said, "Let's do it again. I'll come back next week." He fucking loved this show — all three of 'em. Everything else was unfortunate, but for the show itself, they left Singapore very happy."

"But we have to keep everyone on the same page, we've got to come up with a standard operating procedure of doing this venue. Because there's no point in doing it if we're doing it half-assed, it has to be done properly."