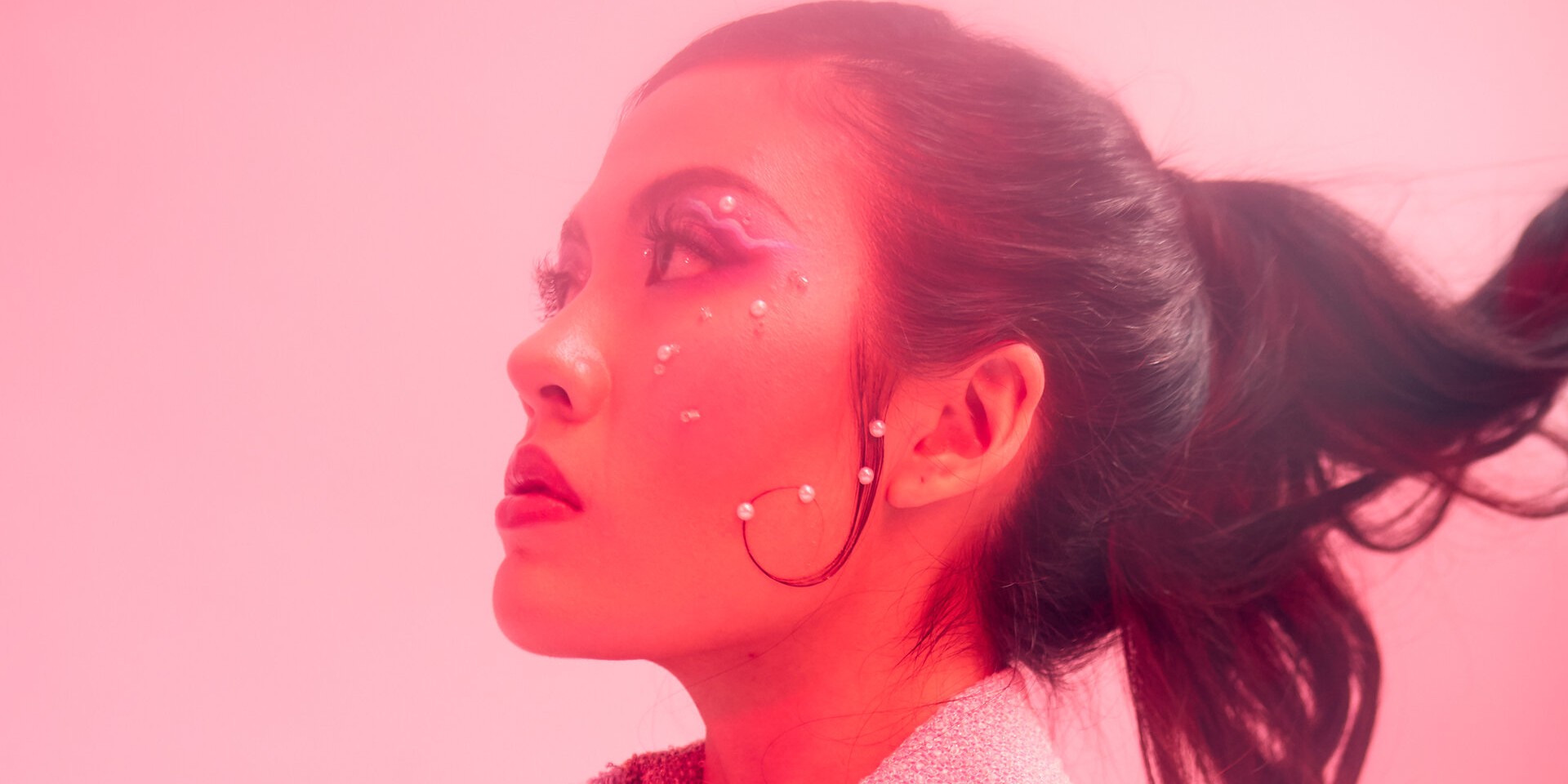 Sincere, honest, and purposeful, kakie creates music that comes from the heart. With an innate love for writing – whether it's for novels, poems or music, the Filipino singer-songwriter has a way of piecing together experiences of heartache, happiness, and love to make an entire world worth immersing into.

"I take pieces of things I learn and imbed them into worlds and characters whom I’ve come to love more than myself in many ways," kakie tells Bandwagon. 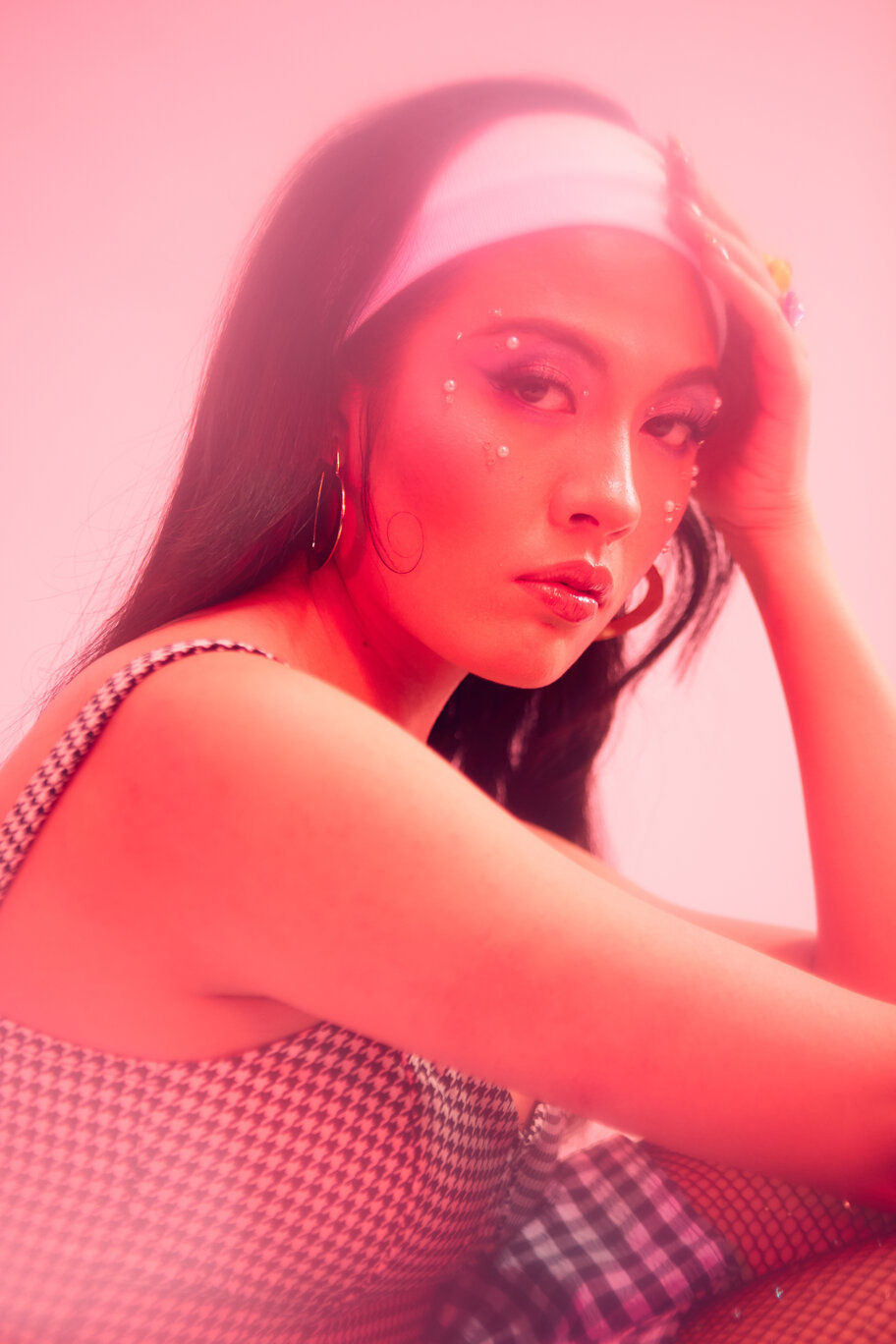 Frankie Pangilinan or kakie is one of the Philippines' newest artist, having just released her debut EP titled abOUT hER SPACE. A record that is said to be only the first part of "a greater storyline", the EP was inspired by stories, poems, and experiences the 'afterparty' act held on to for the last couple years.

"I carry the weight of my heart wherever I go, and I think this becomes obvious the more closely one might examine my work. I’m very blessed to have a handful of wonderfully kind readers over on my writing account which has become a safe haven, a singular unperturbed space in these times of such hostility everywhere, who are devoted beyond anything I could’ve ever imagined," says kakie.

abOUT hER SPACE follows the release of her 2020 track 'battlescars', and debut single 'tyl' that was produced by Ely Buendia.

"It was maddeningly fun. I’m a big Eraserheads fan but I don’t think he knew that, I shook the whole time. It was fairly straightforward, I was far too nervous, and just a little lacking in bravery. I needed a little push, and I got it," says kakie, sharing her experience working with the Filipino rock icon.

"I recorded the acoustic version first, one take and raw, having been tricked into singing for practice when I was actually being recorded. The initial betrayal at finding out was eased by pizza and deep breaths. There were lots of cats. I love all the cats at Crow’s Nest Studios, and I can’t wait to get back to work there."

Fresh from the release of her debut EP, Bandwagon caught up with kakie to talk about pursuing music, her creative process, and what inspired abOUT hER SPACE.

Hi Kakie! Tell us, how did your interest in music start (from singing to songwriter)? What pushed you to pursue a career in music?

People tend to assume that I was influenced by others to pursue a career in music, and while I see why one might come to that conclusion, it’s simply not the case. I never thought of music as a job or a profession until very recently, it just came to me with the need to fill silences in a somewhat lonely childhood. I enjoy it so much that it seems almost shameful to call it work. I would mention how my passion for writing, in general, was a natural gateway into songwriting. 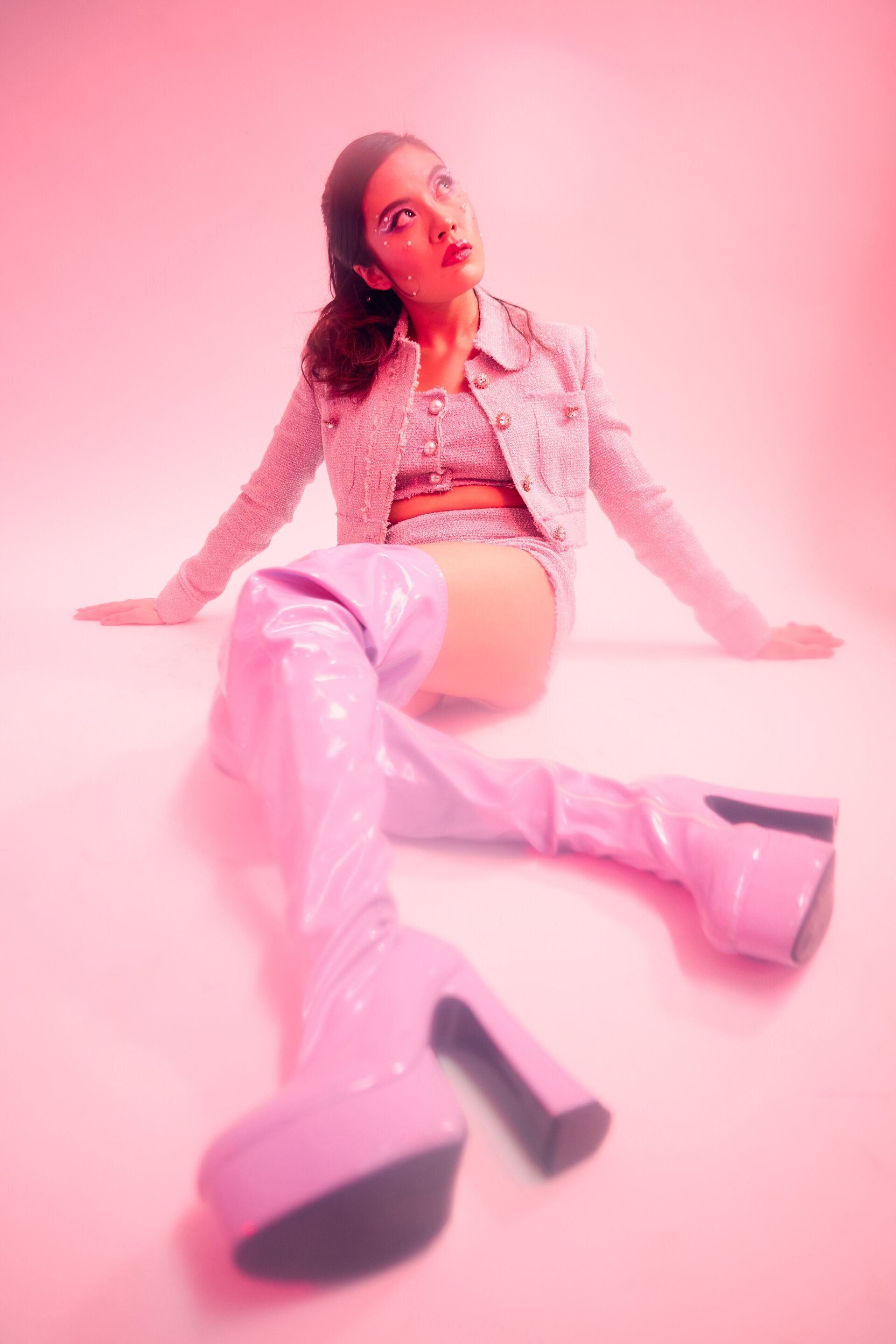 You are also a writer in a more literary sense. How does your songwriting differ and/or relate to writing stories?

One of my favorite things to do is to plagiarize myself! I find that I’m always writing in between the bits of breathing room I’ve got left in the tightly packed routine that’s become life. I’ve been writing songs nearly as much as I’ve been writing stories, and while the processes are similar in some ways and vastly different in others, I find I harbor a lot of the same sentiments between one form and the next. There’s fiction, poetry, and song — and each rules over the same portion of my tired brain in varying intervals.

Other times, my prose can directly affect my songwriting like in abOUT hER SPACE, the song 'gone' is not based on a personal experience but on one lived vicariously through the eyes of a character I wrote around a year ago. The song 'shatter' is based on a poem I wrote a while back. I think that creative energy ebbs and flows between all media, and it’s a wonderful thing to be able to take fragments of things forgotten or locked in lines and spaces and transform them into something new, but bone-chillingly familiar.

Describe the type of music you make and the inspirations and influences behind it.

I don’t think I can describe it, quite frankly (no pun intended). I spent a lot of time trying to categorize what I do, and while many of my songs might be more indie-pop now than anything, I have other music in the works that are jarringly different from what I’ve put out before. I hope to always surprise, and refrain from ever doing the same thing twice.

To put boundaries on art that’s ever-evolving is such a shame, and we’re living in a time where the lines between genres have grown thin, where barriers of every kind are starting to blur. This is an advantage but also in many ways a weakness, I never quite know where to start and when to stop. There’s a hint of madness that goes into music-making (or perhaps, a lot of it).

Who are some of the artists you listened to growing and how they’ve influenced your music?

I was named after Nina Simone (my first name is Simone), and she’s been a big inspiration along with many of the great jazz crooners like Ella Fitzgerald, Eartha Kitt, and Amy Winehouse. Amy actually really helped me come to terms with the deepening of my voice in adolescence, which was a somewhat terrifying ordeal. I’m a contralto, which used to make me insecure, but I find now that that insecurity was just a lack of creativity and better knowledge.

i literally don’t remember writing this but i found it and thought it was a little pretty so hi i hope you’re all safe and happy and we’re going to be ok pic.twitter.com/k0wgSM02CD

Growing up, I listened to lots of bands too. I’d name them all but that’d probably end up being an essay in itself. Good music requires collaboration, whether direct or communal or subconscious. I can’t name every artist who’s ever inspired me either but I tend to seek lessons and further knowledge from every artist I come across. Everybody’s got something great going on, something worth analyzing and taking notes over. You just have to look closely and realize what applies to you and your own musical journey.

There’s barely any sleep. Lots of bleeding ink on lined paper. A dozen old notebooks on a nearby shelf, the one notebook currently in-use on the desk. There’s a speaker and headphones and a makeshift studio booth under my bed. There’s often a sunrise to greet as it cracks through the horizon and stains the sky cerulean. Sometimes there are tears, more often there are fears, and shaky breaths, and broken hair ties. And there are glow-in-the-dark stars on the ceiling.

i’m cleaning up the others because they’re TOO specific and distracting i don’t want y’all to have to decode them HAGAG pic.twitter.com/xM0BTo0lBu

Congratulations on the release of your debut EP! Can you tell us more about it and what story does it tell?

Thank you! abOUT hER SPACE is chapter one in this particular concept arc, and I’d hate to give too much about the upcoming installments away, but in itself, this is a compilation of older songs that I clung onto nervously for the better part of four years, as well as a couple newer bits of myself that were aching to be set free.

Kindred Productions are the only people I trusted enough to help me do so, and I’m beyond overjoyed that I did, because not only are they exceptionally talented, they’re friends I plan to keep for as long as they’ll allow me. ‘abh’ stands for a broken heart/a bountiful harvest, because that’s exactly what this is — reaping the benefits, the results of the ache long after it has gone. It’s best served from start to finish, from maybe to hurting.

hi book club i just wanted to let u know this EP was just as much a tribute to u guys as it was a catharsis for me 🥺 maybe is for my liham/lihim lovers out there, gone is for the arkhoes, and the rest are for everybody who paid attention to my snippet teases hehe ilysm

You mentioned earlier on Twitter that ‘afterparty’ is all part of a greater storyline. What does this storyline entail?

Haha that’s a secret for now. I wouldn’t want to spoil all the fun! But I can say that everything I’ve done up to this point has been very deliberate, in an effort to weave all my work into one cohesive tapestry. This goes for anything I might release in the future, at least until I feel that the story gets the ending it deserves.

What message do you hope to relay to your listeners through your music?

Love is strength. Stars are pretty. And so are you.

You grew up in the public eye, having come from a well-known family background. How was it growing up in the spotlight? What are the challenges you’ve faced throughout your musical journey? If so, how have you overcome them?

I don’t think I’ve overcome much yet, so I can’t quite attest to what they are and how to beat them. Sometimes it’s several little things, more often though it feels like a big, muddled mess. I’m still scared of lots of things, it feels a bit like wearing somebody else’s shoes and not quite fitting into them.

There are lots of challenges but lots of privileges too. It’s sometimes hard to tell which is which, and I’m still figuring that out. Some days are sweeter than others. It could be better, but also could be much worse. I’m grateful for what I have because there’s nothing to be gained from mulling over it any more than a waste of energy and a bitter taste in the mouth which can always be easily avoided. I guess I can just say I’m doing my best to look inwards for validation, despite a lifetime (thus far) of being taught and/or shown I should be looking for it elsewhere. Sometimes I don’t know if I’m allowed to be sad, even if I am. Books and medicine tend to help, as they often do.

The Philippines’ music scene is vast, with talented artists emerging from every corner. What do you think makes you stand out?

I’m me, I guess that’s really just it. No one can ever exactly replicate what you create. I’m here to offer a piece of my battered heart and a shard of my all-too-easily distracted brain. It might not be much, but it’s honest and real, and I care about it more than anything. It steals my sleep and ruins my rest, because it matters to me. Maybe that means it’ll matter to someone else too. 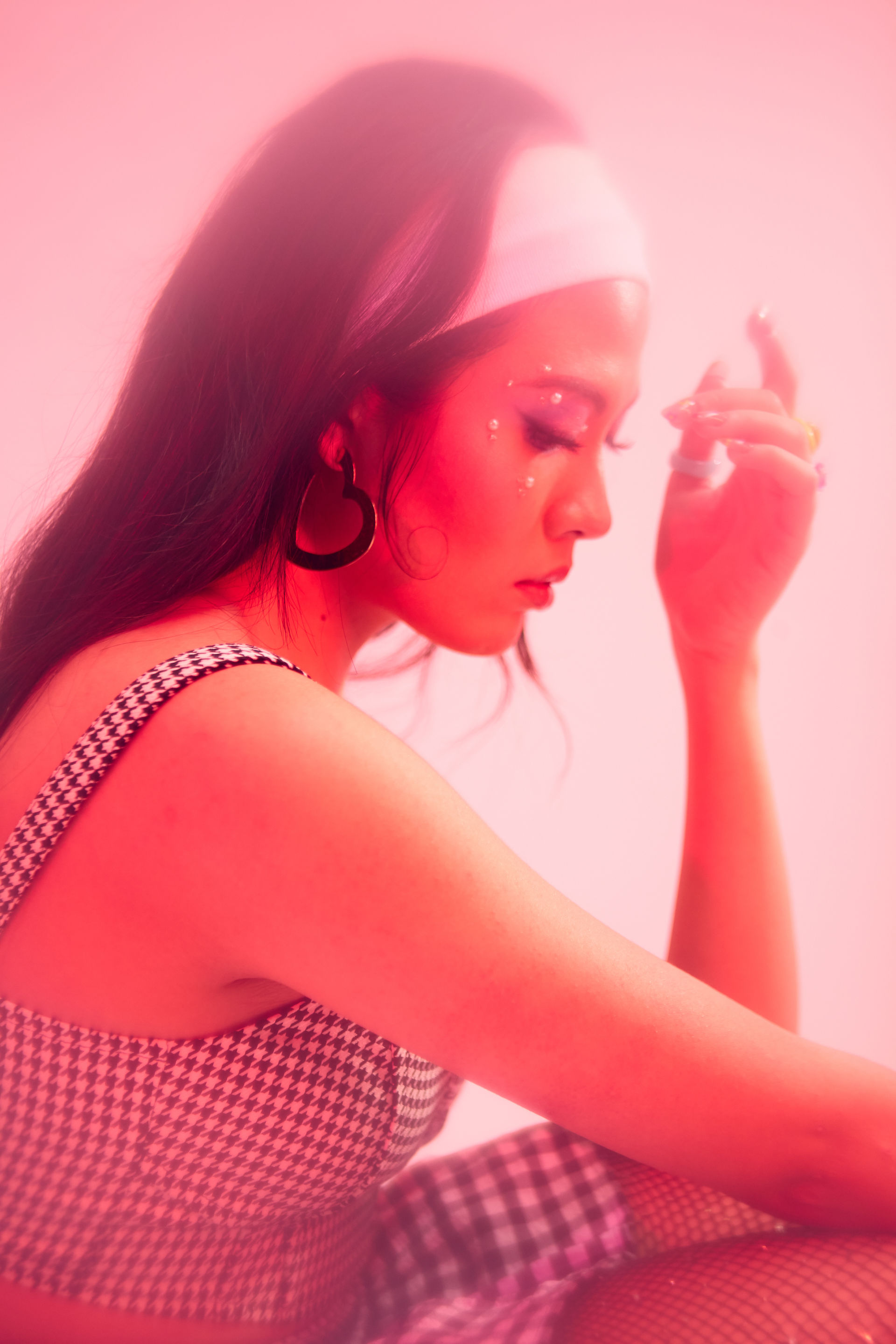 Beyond music, you’re an all-around creative and an avid writer.  Tell us, what do you do to get out of a creative rut?

I can’t quite remember ever having a rut actually, apart from when I was in relationships that took up most of my attention. So I guess, I break up with my boyfriend then I sleep.

What else can we expect from you in terms of music?

Listen to kakie's abOUT hER SPACE here.