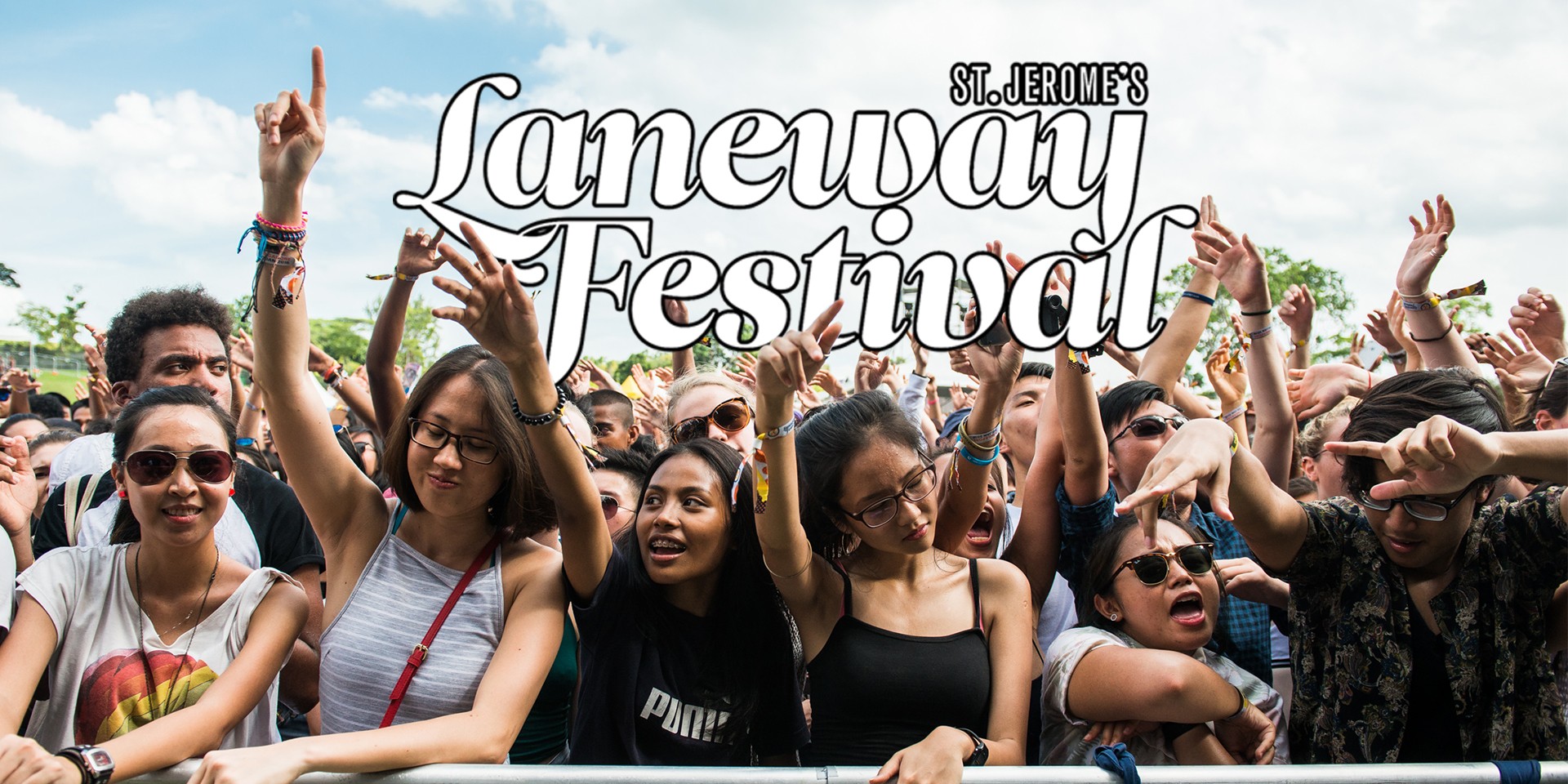 After resting on a stay-in Sunday to recollect our thoughts and recover — along with listening to more Beach House and crying (you know, the usual stuff) — we've taken a look back at what could be one of Laneway Festival's finest hours yet, which is not the easiest thing to achieve, what with all the pre-festival controversy.

Even as their line-up this year was heaped upon with praise, presenting its most diverse set of acts yet, it was also discovered that this year's event would not allow re-entry. This one small amendment made a huge impact, with several fans expressing disappointment and some even threatening a boycott (lol), but the festival did not budge.

While there were many who were dismayed, and reconsidered attending this year, we did not find the rule to disrupt our usual festival fun — instead, the festival's efforts to provide a bigger space for frolicking, along with an additional stage (with air-conditioning), gave us enough room for a respite away from the throngs of dancing festival-goers. The festival's assurance to omit tokens, allowing cash and card transactions, made it easier to attain food and drinks when we needed it the most. Our thoughts are still with you, budget-conscious festival-goers. We hope you made it out just fine.

Every enjoyable Laneway experience comes with its setbacks, and this year was no different.

Here are some of the best (and worst parts) about Laneway Festival Singapore 2016. 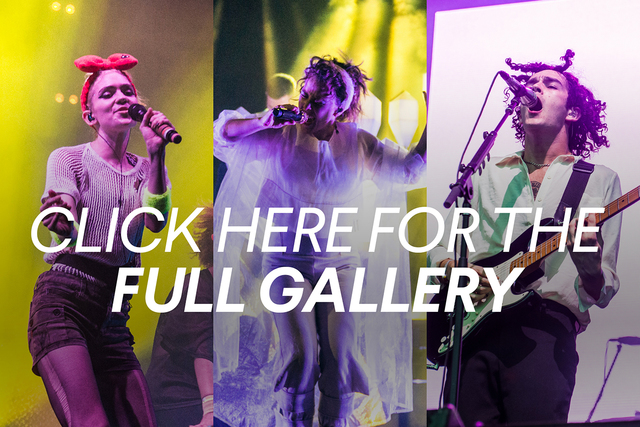 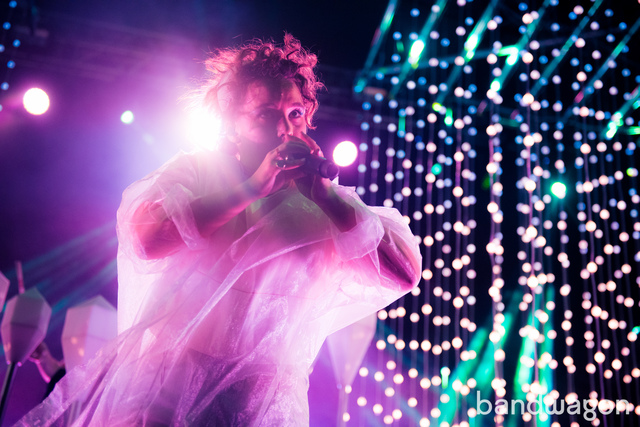 While some of us had our personal preferences for the acts that day, all of us can agree that Purity Ring smashed our expectations to bits with an absolutely stunning live set. With the Cloud Stage's massively improved sound this year, which lent a considerable dimension to sets by East India Youth, Intriguant and Shamir, Purity Ring took advantage of the relatively intimate space to envelop the audience into the duo's crystallized and mystical world — complete with an elegant light set-up that can be best described as a "digital forest."

The band has always been at the top of the live music game since their first shows, supporting 2012 album Shrines, and in 2016, they have another record on their back (the EDM-influenced Another Eternity) — with that, an improved live setup that has interactive cocoons for producer Corin Roddick to trigger, and an endless stream of lights for singer Megan James to manipulate as she twirled and sauntered onstage. Truly a sight to behold. 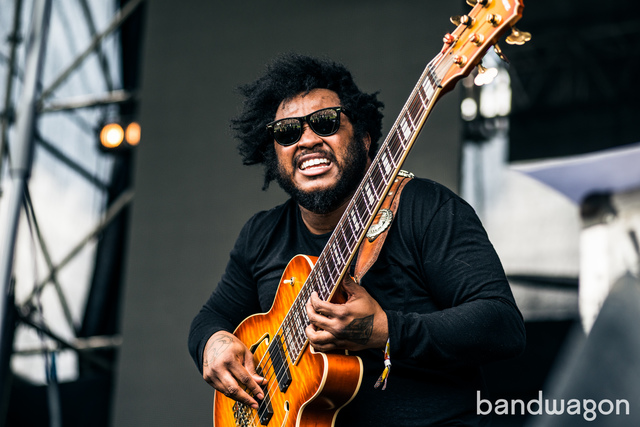 Who would have ever expected a jazz-fusion act to be booked for Laneway back in the day? Major props have to go to the organizers for their bolder programming this year, and they must be encouraged by how well their risks paid off. Brainfeeder bass-genius Thundercat enthralled the early afternoon crowd with a masterclass in musicality and groove, together with his supremely technical keyboardist and godlike virtuoso drummer.

After shouting out his brother’s band The Internet (who came on right after), Thundercat even ended his set with the closing song from Adventure Time (‘The Island Song’), which made all our geek hearts melt. 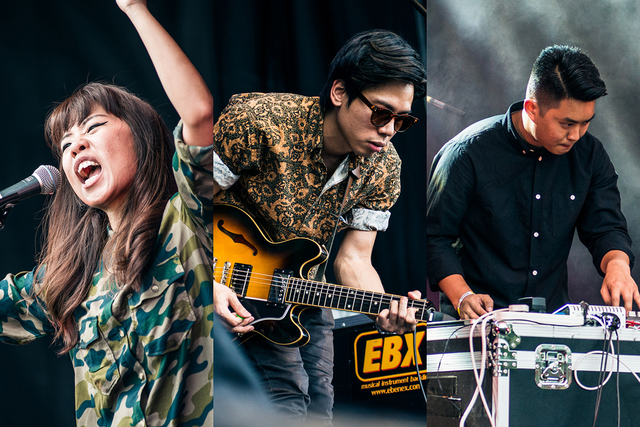 Besides the stellar local talent in the White Room, plenty of Singaporean acts impressed on the two main stages and the Cloud Stage as well. Riot !n Magenta were the first band to kick off the festival, and they certainly blew the early birds away with their sparse yet expansive atmospherics alongside Ginny Bloop’s typically dynamic voice and stage presence.

Next up were Singaporean rock ‘n’ roll heroes Cashew Chemists who rolled up onto the Garden Stage for a prime 4.30pm showcase. Opening up with Previously On anthem ‘Feel Amazing’, the band proceeded to tear through favourites from both their EPs before closing off the second half of their with brand new material from their upcoming full-length album. Sounding like a cogent mix of psychedelic rock and the blues, Cashew’s fresh material had everyone grooving. We even overheard one casual fan assuming that one of their original tracks was a Tame Impala cover.

Intriguant was the final live local act of the day, and his lush full-band set-up was certainly something to behold. Although we’ve seen Louis Quek’s live set-up before (typically consisting of a violinist and a guitarist), it seems like he decided to greatly expand his sound for his biggest stage to date. With a four-piece band backing him up alongside special guests like Tim De Cotta, Charlie Lim and Ginny Bloop (pulling double duty), Intriguant’s gorgeous electronic soundscapes proved to be immensely absorbing. 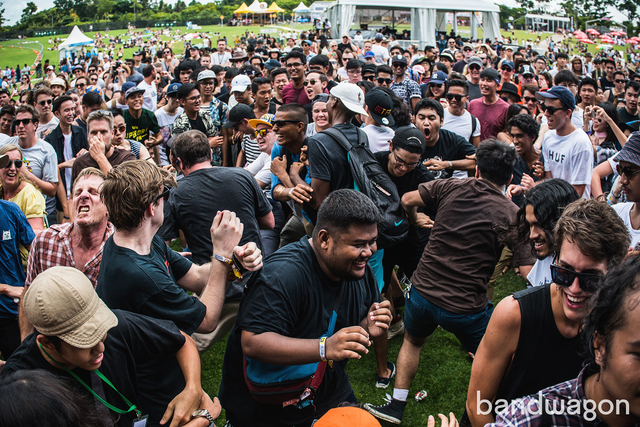 Alas, one of the few complaints about this year's line-up is the decrease of rock presence. While we admit it was strange that there were four main acts back-to-back with barely a presence of electric riffage, there were still plenty of rock acts powering the day with distortion — grunge revivalists Violent Soho, garage rock band Big Scary, blues-rock outfit Cashew Chemists and noise rock METZ were leading the pack, while Beach House and The 1975 applied electric guitars as crucial aids to their sound. All that was left? Moshpits. 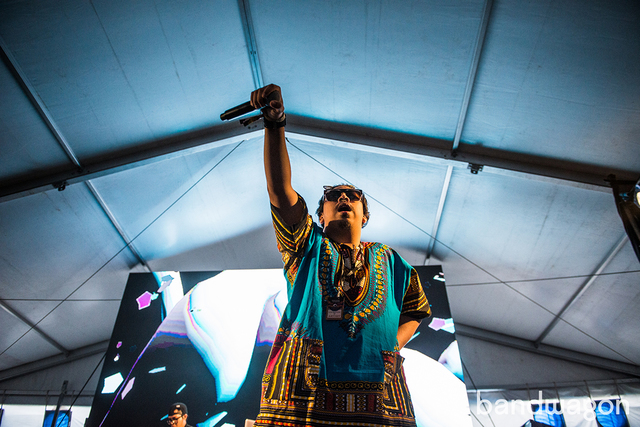 As we’ve mentioned, this was a year of many firsts for Laneway, but the Syndicate-curated White Room was easily the best addition to this year’s festival. The bass-music leaning tent just adjacent to the Cloud Stage kept a significant crowd going all day long, and even if you were just passing by for the air-con, you probably left pretty impressed by the quality of talent on display.

From the moment FAUXE kicked off things off (featuring a surprise appearance from Mediocre Haicut Crew), to RAH’s crowd-pleasing set, to Mean’s insanely hyped performance together with his XS Collective buddies, the afternoon festivities at the White Room got things turnt pretty quickly. But amazingly enough, things got even crazier by the time night fell.

Melbourne’s JPS and Los Angeles’ B. Bravo kept things going with a mash-up of hip hop, funk, soul, future beats, salsa, samba, dancehall, drum & bass and reggae — providing stray Laneway attendees with a nice little education into the world of bass music. The highlight of the White Room however has to be the time-tested combination of Kiat and his trusty MC Kane, who made a 2016 indie festival feel like it was an old school Guerrilla night. And in case you were unaware, Kiat actually injured his foot sometime back, so he was hobbling around crutches the whole day. Just the fact that he was able to deliver a set like that, despite the unfortunate circumstances, ups our respect for the Syndicate OG manifold.

Special shout outs have to go to Brandon Tay and Amanda Tan (aka Empyreal), whose visuals blew everyone away. As kinetic as the performances, they wouldn’t have been nearly as engrossing without the on-point work of these two visualists. Whether it was Brandon Tay’s surreal motion graphics or Empyreal using the gorgeous forms of the artists themselves as the backdrop, the White Room experience wouldn’t have been complete without these two. 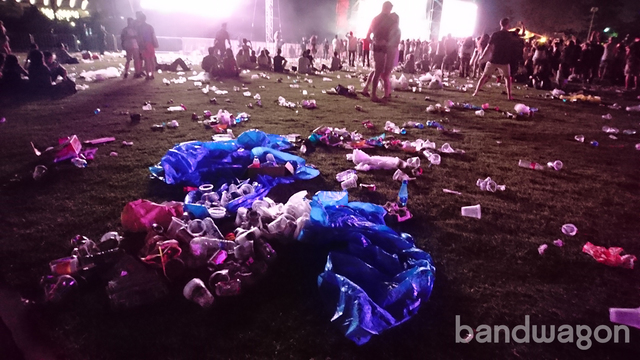 Even after a concerted campaign by the organizers and independent group Traceless (run by our green hero Timothy Chua Yi-Neng) to remind attendees to pick up their trash this year, it sure seems like very few people cared at all. The grounds at Garden By The Bay were just as littered in 2016 as they were in 2015, and the heaps of casually discarded garbage was a heartbreaking sight to see. Perhaps next year, Laneway could include water refilling stations as well, so as to minimise the use of plastic containers. 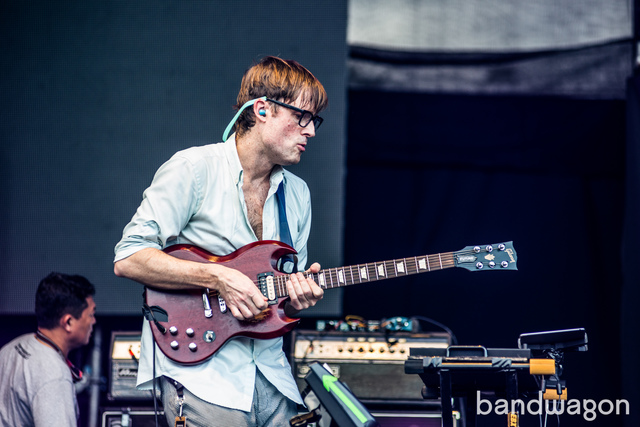 Having seen the trio explode in top form at Clockenflap 2015, New York math-rock band Battles were sadly bestowed with a faulty amp, one that immediately caused problems when the band ripped into the euphoric 'Ice Cream'. As the backstage crew were working their hardest to salvage the troublesome equipment, the band attempted to jam from one song to another, before encountering more issues with the stage setup. (EDIT: We've learned from Ebenex, the primary backline provider for Laneway, that the set interruption was due to power failure, and not faulty equipment.)

Bandleader Ian Williams was visibly frustrated while drummer John Stanier filled the frustrating void with an intense drum solo. Finally rectifying the equipment issues about 10-15 minutes into their set time, the band wasted no more to play the rest, leaving fans on a mixed note with 'The Yabba'. Battles, and all of us, deserved better. 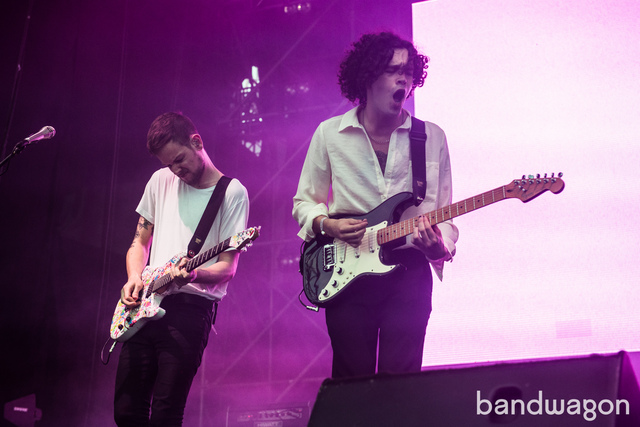 Manchester pop-rock band The 1975 were a surprise addition to the line-up, slipping in after singer-songwriter Tobias Jesso Jr. dropped out, and their local popularity was evident on the day itself — after a successful headline show at The Coliseum in 2014, diehard fans (mainly teenage girls) appeared in droves just for the four-piece. Additionally, the band's set provided a glimpse into their bafflingly-titled upcoming album I Like It When You Sleep, for You Are So Beautiful Yet So Unaware of It, treating local fans with new songs that many fans around the world have yet to experience live.

While their set was passable, littered with energetic and danceable pop-rock ditties, we heard that the band unceremoniously canceled their meet & greet session at the last minute — disappointing the breathtakingly long queue of fans, many of whom waited for a half hour to meet them. Even as a few other high-profile acts bowed out of the sessions, The 1975's abrupt decision reeks of rock-star douchebaggery. 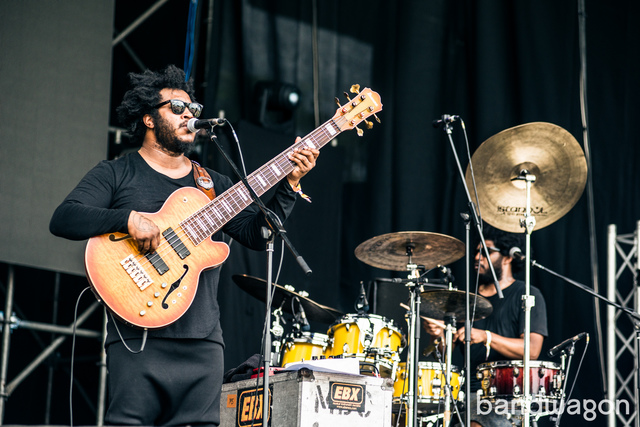 This is a weird one because Thundercat was one of our favourite performances of the day. Despite the wonderful show, we still think the sound for his set could have been improved upon. A lot of low-end definition failed to come through (a big no-no for a bass player obviously) and we had to strain to hear the band’s amazing keyboardist. Just minor gripes, but we’re pained to imagine how much more amazing Thundercat’s performance could have been under ideal circumstances. 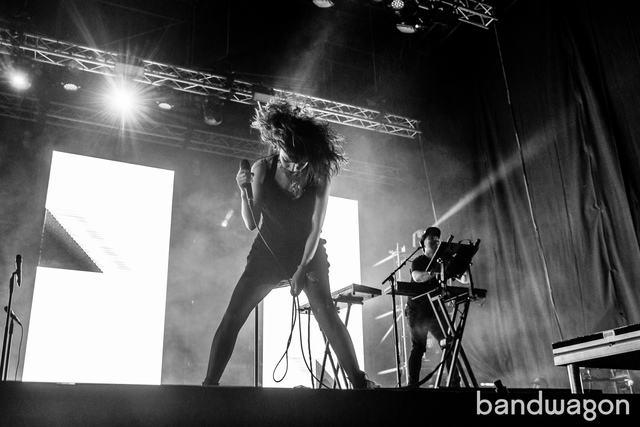