The ongoing coronavirus pandemic has created havoc in the music industry. In the last quarter, an entire year’s worth of live events income has been wiped out and musicians are having to pivot to digital shows and alternative ways of revenue.

These are undoubtedly difficult times, but many musicians are not letting it get them down. They still continue to release new tracks and music videos, collaborate with regional and international acts and get involved in new and innovative projects.

To further understand the situation and what artists are going through, Bandwagon recently put out a survey on the impact of the COVID-19 pandemic on Singapore’s music industry. 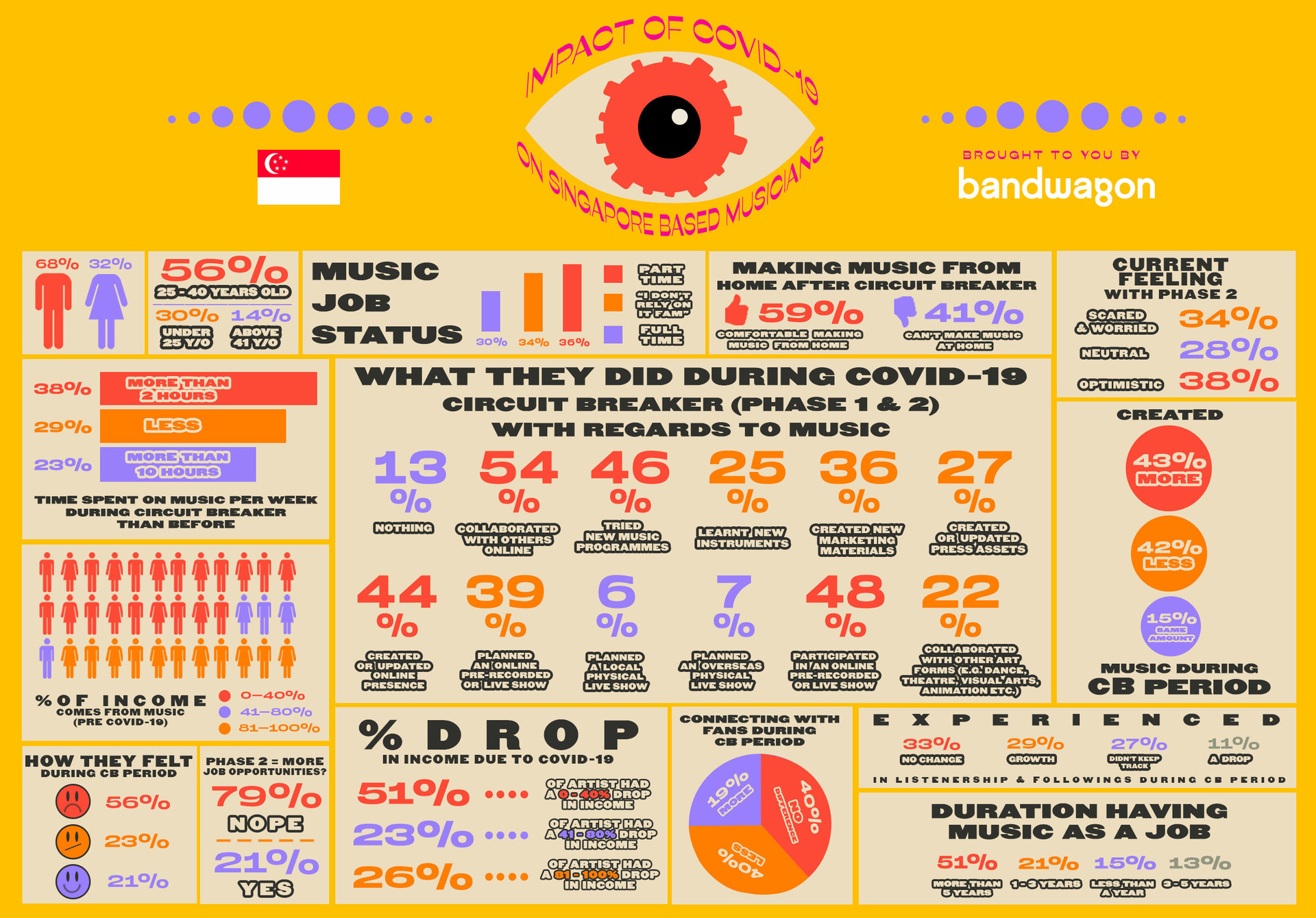 The survey was conducted a week into Singapore's Phase 2 of Re-Opening, which was almost three weeks after the Circuit Breaker period, an almost two-months-long stay home order implemented by the country's government. Results were collated from 101 musicians and artists, aged 18 and above, who range from doing music full-time to just casual gigs. Of the respondents, the majority were male (68%) and between the ages of 25 and 40 (55%), who have been doing music for over five years (50%).

The survey asked musicians about the financial impact of COVID-19, how they felt and what they did during the Circuit Breaker period, and how the music industry will look moving forward.

56% OF MUSICIANS FELT WORRIED BECAUSE OF THEIR UNSTABLE INCOME

Not surprisingly, the survey revealed that musicians were generally worried and anxious during the Circuit Breaker period. When asked how they felt on a scale from 1 to 7, with 1 being mostly worried and 7 being most optimistic, over half of the respondents a 3 and less. Most respondents cited an unstable income, loss of job prospects and the lack of creative inspiration as reasons for worry and anxiousness. 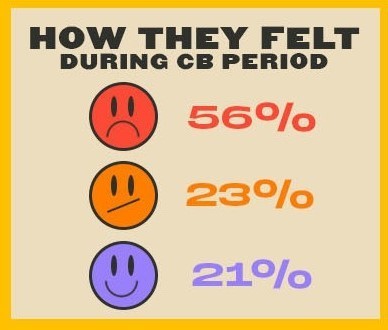 “[I’m] worried [because of] not knowing when we will be able to perform or go on tour again. Performing has been part of my life for the past 20 years and performing is the only time we could really interact with our supporters,” said one of the respondents.

“Our only way of getting our music across is through live shows, and bands that rely on the sound electric instruments are somewhat at the mercy of a live venue. People interact better when they are next to the band and not disturbed by Facebook ads and messages during a live stream. Also, the future was already bleak pre-COVID, now it's a surefire nail in the coffin and I know some people who are probably calling it quits, which could include me as well,” said another respondent.

49% OF MUSICIANS EXPERIENCED AN INCOME DROP OF 40%

Now more than ever, the vulnerabilities of the local music industry are being revealed, with musicians’ sole source of income - live music events - at the forefront of the wrath of COVID-19 in the music industry.

For most full-time musicians, they have reported having lost between 81% to 100% of their income due to the pandemic. While part-time musicians have lost between 40% and 80%. And, even as Singapore reached the middle of Phase 2 and with most of the economy reopening, musicians still have yet to see the return of live events and gigs. Almost 80% of survey respondents have seen no increase in job opportunities after the Circuit Breaker period.

"No changes job-wise [after Circuit Breaker] and it’s worrying not knowing when we can go back to work. Even if Phase 3 comes along we don’t know if the venues we have performed at are able to financially support bands coming back on a regular basis," said a respondent.

42% OF MUSICIANS HAVE MADE MORE MUSIC DURING CIRCUIT BREAKER

On a positive note, however, many musicians felt that, during Circuit Breaker, they were able to take a much-needed break and re-focus on their craft, without any stress or pressure, and even dabbled in new projects they wouldn’t have otherwise. 54% of respondents were able to collaborate online with fellow artists, 48% participated in online shows and concerts, and 46% experimented with new music programmes. 42% of respondents even reported have made more music during Circuit Breaker. 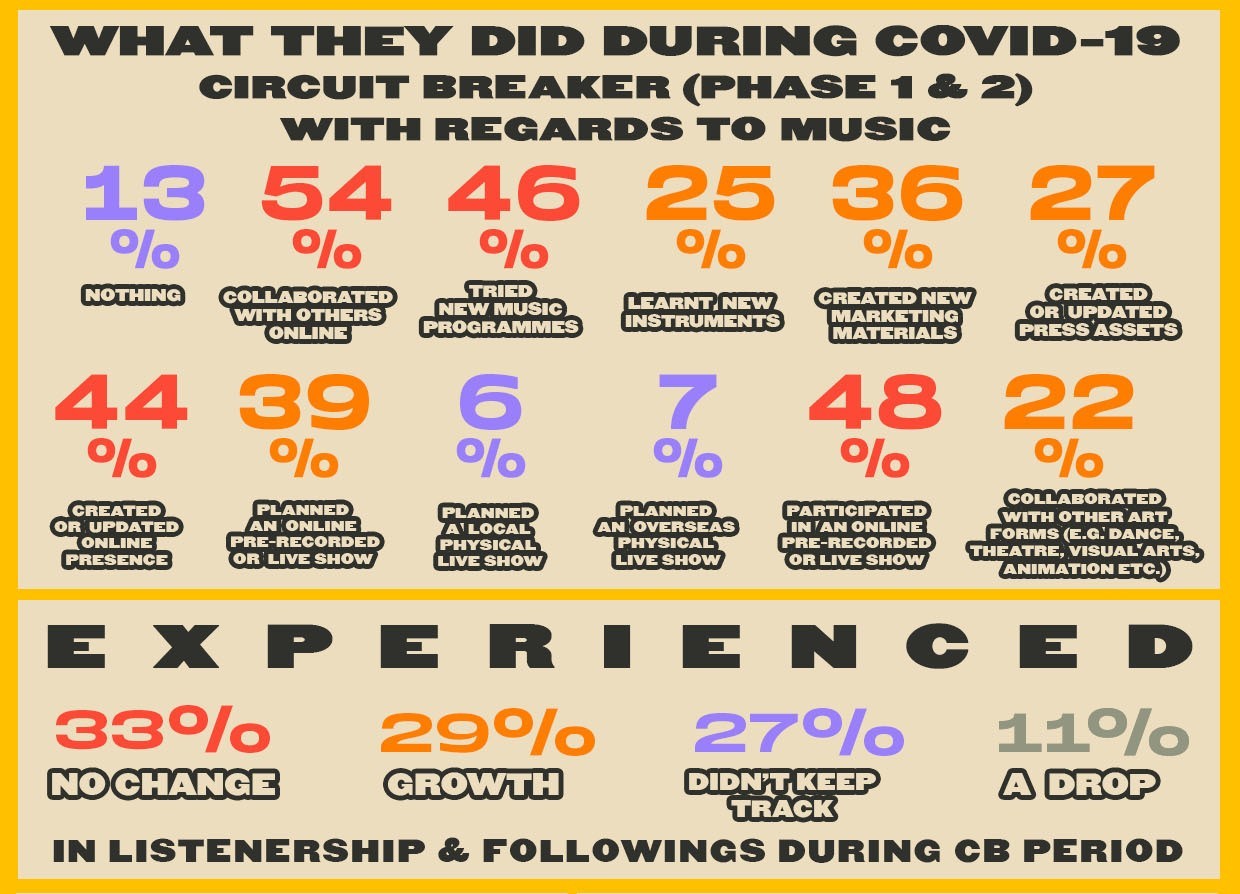 29% OF MUSICIANS SAW AN INCREASE IN LISTENERS

With so much time in quarantine, musicians and artists were also able to connect to the people that made it all possible - their fans. By putting out new music and engaging more with fans online, 29% of respondents saw an increase in their listenership, while 33% were able to maintain their fanbase.

Check out some projects local musicians have worked on while in quarantine:

“When faced with difficulties, my first instinct is to adapt or survive, while understanding that such plans will take a while to bear fruit. So, it became a period of trial and error, and evolving which I enjoyed,” said a respondent.

“I worked almost every day prior to COVID-19, and circuit-breaker actually forced me to take a breather and embark in other activities that I previously did not have the time to do, [like] exercising, making music covers, writing more originals, online co-writing sessions, eating home-cooked food and more,” said another respondent.

38% OF MUSICIANS ARE MORE OPTIMISTIC AFTER ENTERING PHASE 2

With restrictions slowly being revised and lifted, people can once again go out and visit their friends and family. While job prospects and the return of a stable income is still largely unclear, 38% of musicians are more optimistic after entering Phase 2, which can be attributed to being able to jam once again, reconnecting with loved ones and feeling a sense of renewed purpose. 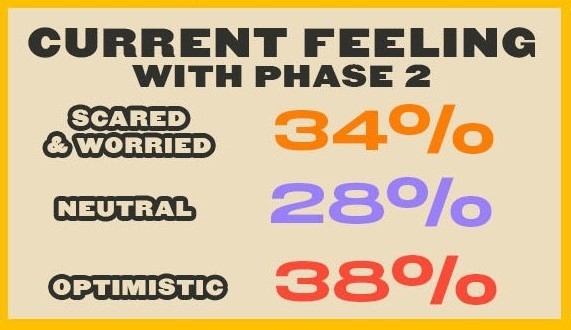 "There's more freedom now to go out and work with others."

"I feel a lot better now that studios are open, and I've been meeting with my friends in these studios to have songwriting sessions. I've started recording for the songs that I've written during circuit breaker. Engagements for online performances have also started coming in."

"Everyone's in a positive mood after being able to go out and meet friends."

"It feels better mentally being able to go out of the house to have meals or go to stores but it is still important to be responsible and follow the guidelines that have been set out."