Malls are an integral part of Filipino society. Regardless of social standing, different malls cater to different tastes and needs, and it would be odd to have a weekend where malls are not filled with people who go there to eat, drink, watch a movie, shop, or just sit around to enjoy the free air conditioning.

Mall shows are also one such regular occurrence on weekends, and especially on consumer-driven holidays like Valentine's Day, Father's Day, Mother's Day, where malls invite artists and musicians to serenade their customers. In recent years, international acts like The Moffatts, Vanessa Carlton, Cobra Starship, Train, The 1975, Boys Like Girls, and With Confidence, have all performed in malls across the metro. Indie pop trio LANY are returning to Manila next month for a series of mall shows. Local acts like Up Dharma Down, Sandwich, and Barbie Almalbis get to tour malls all over the Philippines, and people flock to the shows because they're (mostly) free.

This weekend, we got the opportunity to tag along with alternative rock outfit Hale during their appearance at Vista Mall in Sta. Rosa, Laguna. Hale first broke into the music industry in 2004, in a time that has been infamously dubbed the "pogi rock era", when the cool thing to do was to snub anything of increasing popularity.

Despite the propensity for rock bands formed during this era to be dismissed as banking on nothing but their looks, Hale earned the admiration of plenty of today's musicians, thanks to their impressive technical skills and solid songwriting.

Tani Cariño, of punk bands Neverdie, Lindenwood and Irrevocable, says that, while he wouldn't consider himself a big fan of the band, he has found many of Hale's songs quite enjoyable. "Hale has great pop rock choruses, lalo na yung 'Kahit Pa'," shares Cariño. He adds that while their lyrics tend to be a little cheesy, Hale's songs always sound sincere. "I honestly think calling them pogi rock is too much of a stretch. I do remember dudes in aggressive bands gushing over them. I think that says a lot."

Hale won a number of awards for their eponymous debut album, including a Triple Platinum Award, selling 90,000 copies in 2006. The group disbanded in 2010 and made their comeback in 2015, with a powerful performance at Wanderland. They released their EP Time and Space in the same year and continued to gig across the country, and had their first overseas performance in Singapore in 2016.

According to Hale's road manager, Bryan Tolentino, the band plays at least one mall show a week. Each show runs 30-40 minutes long, with around 10 songs per set. Last year, Bryan told us about how store owners at one mall had been prompted to close shop every time the band would be performing there, in order to prevent looters from taking advantage of their unattended stores.

Last Sunday's show was scheduled to start at 6 PM and some fans were already milling around the venue as early as 4 PM. The stage was located inside the mall, with a VIP seated section for at least 200 people. All fans had to do was present a single receipt worth 500 PHP from any store in the mall, from that day. The first 50 people to present a receipt were given a meet-and-greet with the band. Fans who bought Hale's CD (worth 250 PHP) were also allowed to meet the band after the show. 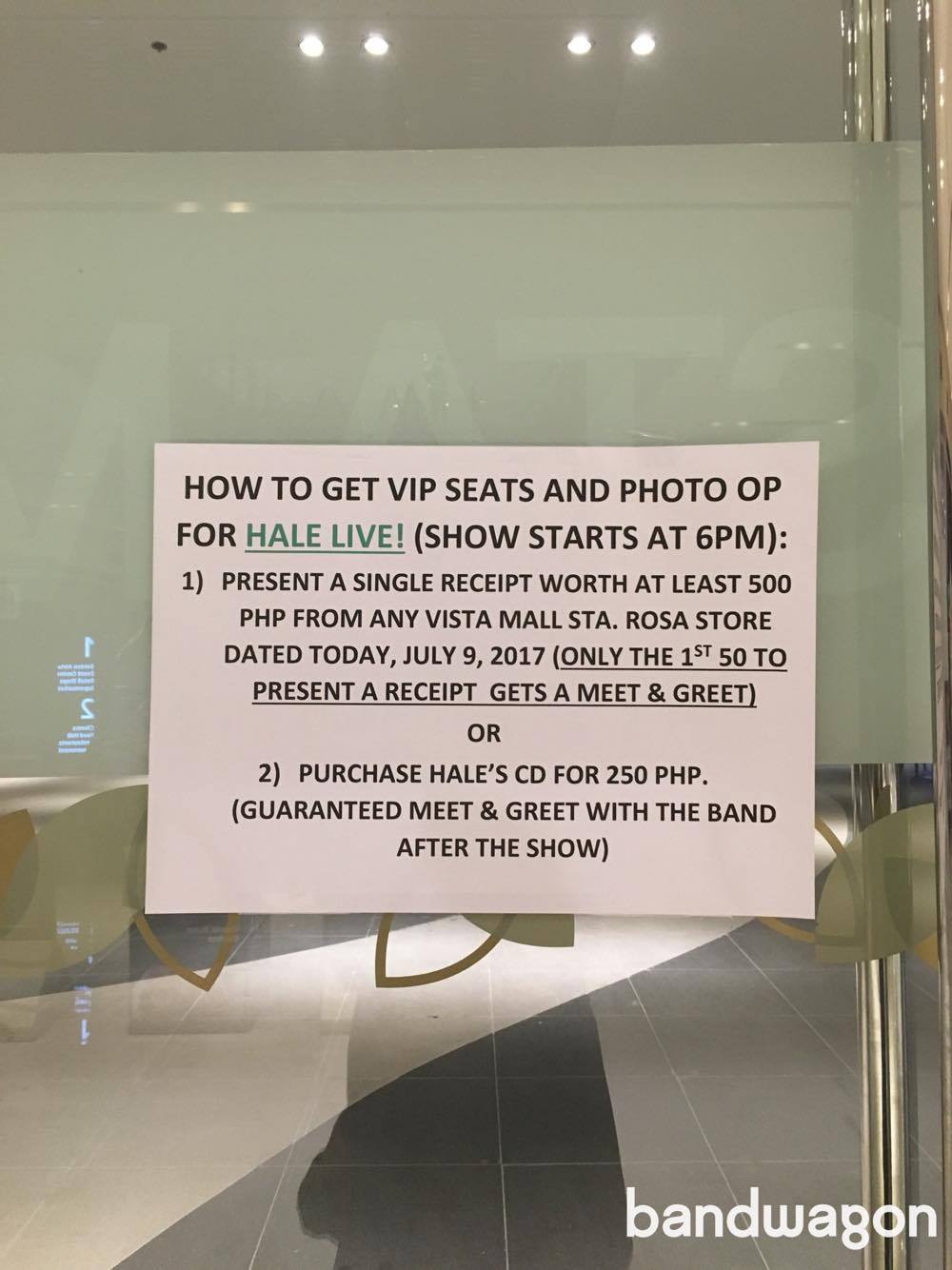 We found the band at their backstage tent at 5 PM, having just arrived with coffees in hand. We were later escorted to the mall's admin office on the second floor, where the band and their crew had early dinner. Vocalist Champ Lui Pio, opted to stick to his coffee while he answered our questions instead. 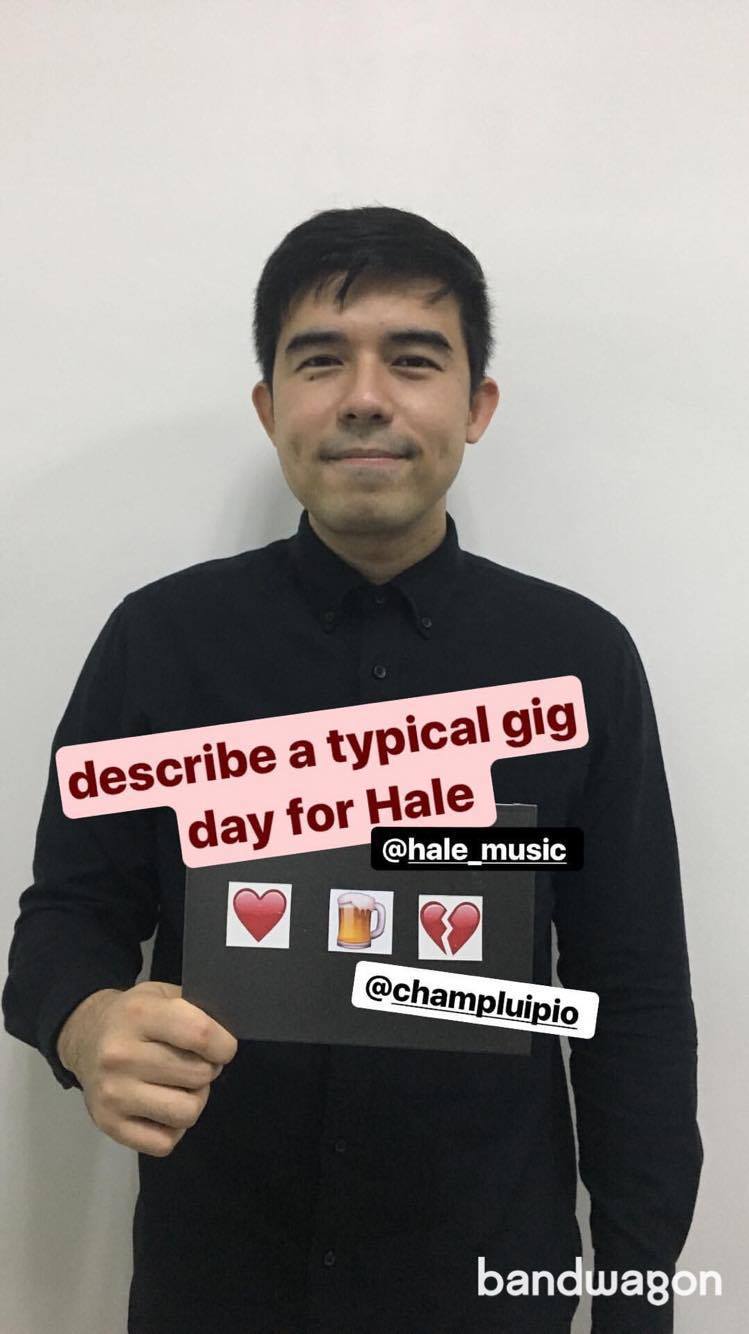 Pre-show was a very relaxed environment with playful conversations between band members, the crew, and their manager. It all felt like family. After all, the band has been together since 2004, minus the 5-year hiatus.

Show us your "bigay-todo" performance faces. 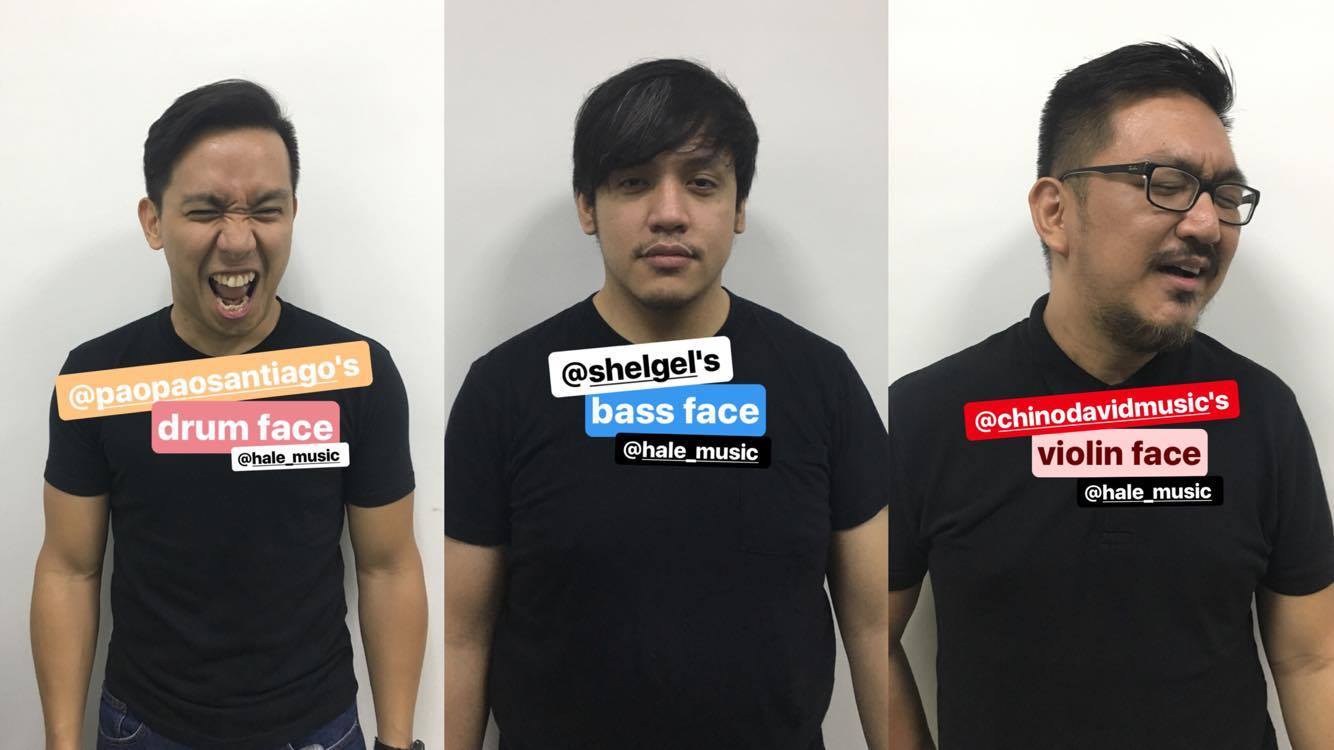 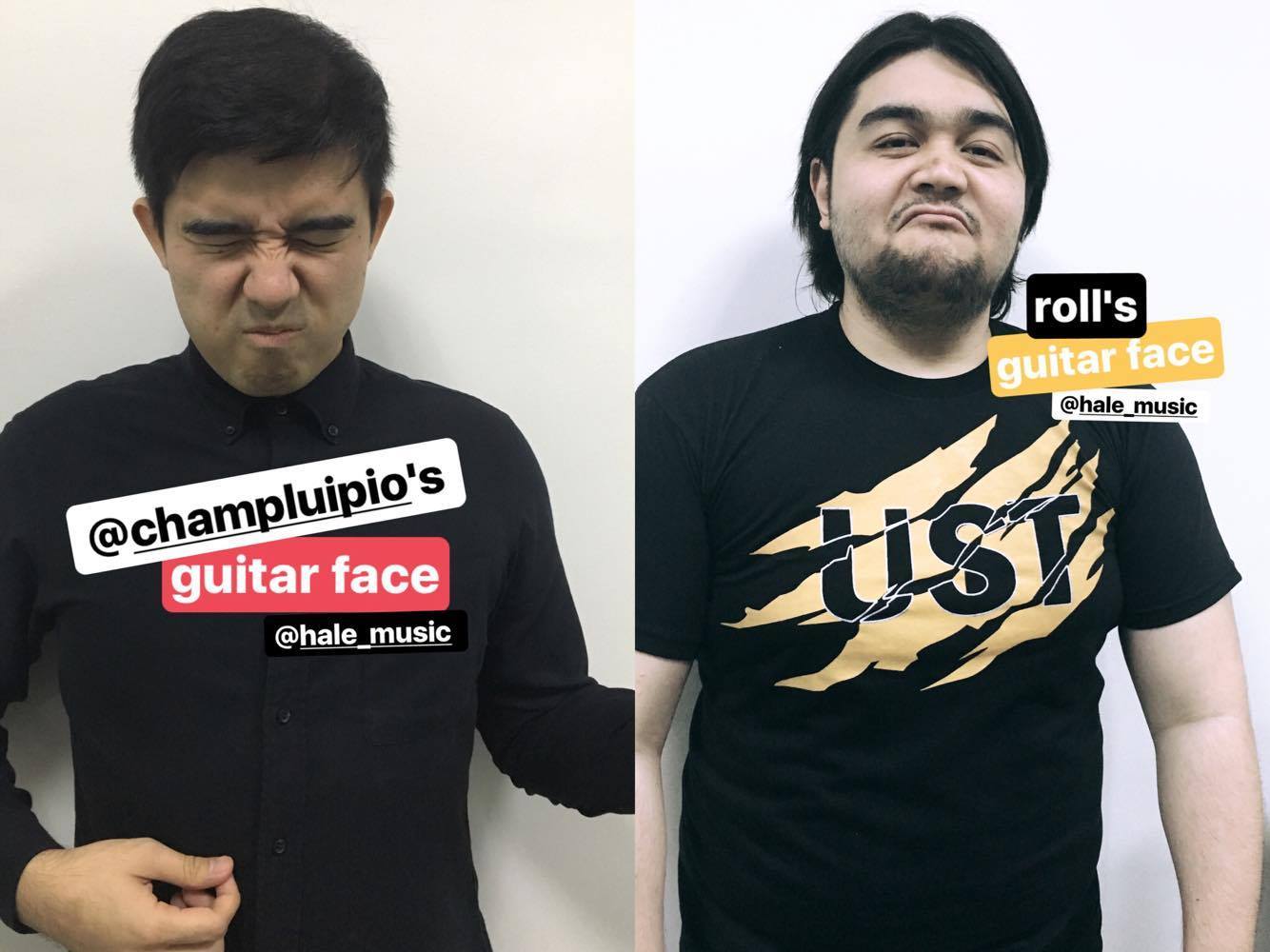 Guitarist Roll Martinez shared that they have already finished recording their forthcoming album, but have yet to perform the new songs live. When asked why, Martinez sheepishly answers, "Hindi pa namin alam [tugtugin] eh," admitting they haven't found the time to practice the new tracks live. The band shares their new album will be out this September.

Their road manager then handed Lui Pio a piece of paper and a permanent marker to write down the night's set list. "We're trying to mix it up now [the setlist], what do you want to hear?" he asked, and we mentioned their collaboration with pop star Sarah Geronimo, "The Great Unknown", a song Martinez wrote and which Geronimo liked so much, it ended up being the title track of her latest album.

Their entire discography was recently released by old label, Polyeast on Spotify.

What are the Top 5 songs Hale fans should have on their playlists? 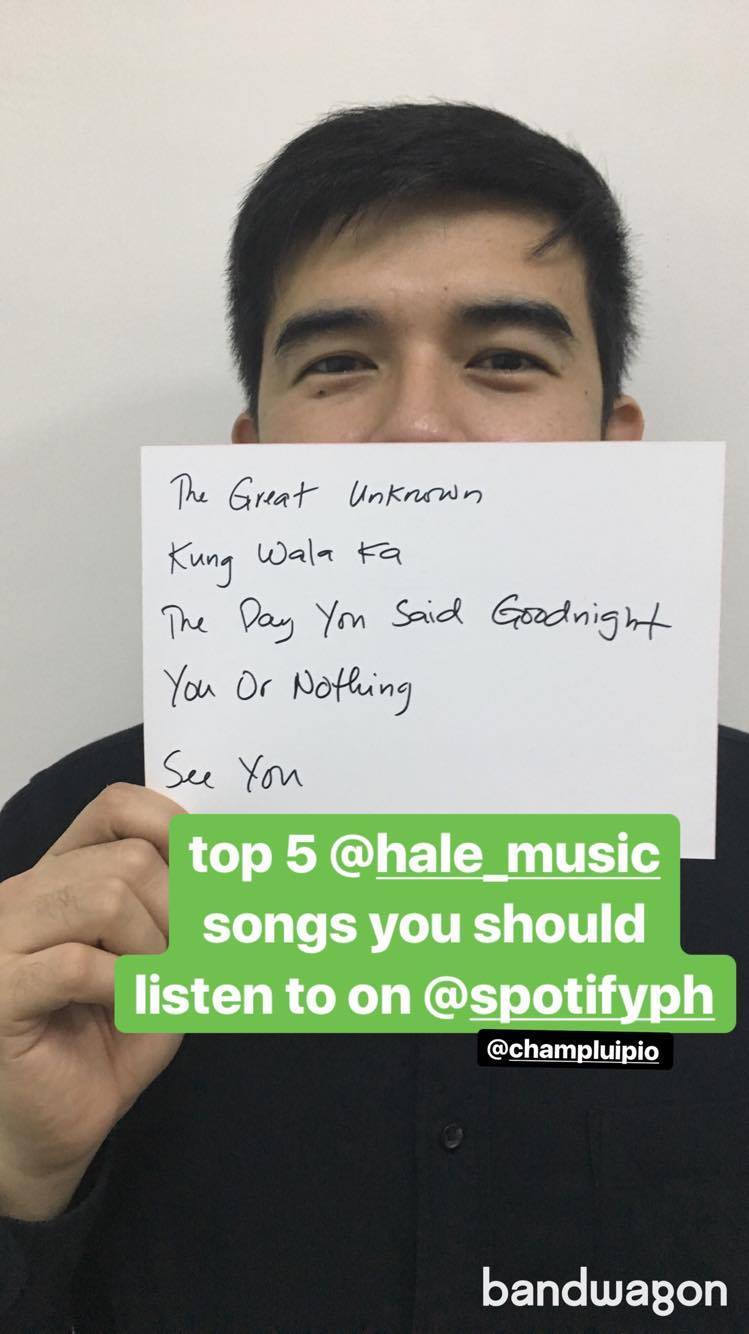 (The card above was later given to one of their fans and signed by the entire band.)

The band wrapped up as they prepared for their show; they practice CLAYGO and the frontman also brings his own reusable water bottle in a conscious effort to be kinder to mother earth. We walked back to the staging area and the band got ready inside the tent with their team.

One by one, the band members walked onstage, with screams getting louder as each one appeared. Lui Pio showed up last and, according to the road manager, slightly late -- "Di ba dapat nasa stage ka na?"

Fans didn't seem to mind as they screamed the loudest when the frontman took the stage, greeting everyone warmly and giving a shout out to the day's host, Vista Mall Sta. Rosa.

The shrieks got louder each time Lui Pio would address the crowd. Less than two minutes into the opening song, the frontman switched to his wireless mic to go down from the stage and grace his fans with his presence, and that's when they completely lost it. One fan, who spent most of the gig standing up and singing (crying) along to the songs, found an opportunity to get close to the vocalist when he made his way down the aisle. Lui Pio playfully asked, "Can I get a hug?" The fan, of course, more than happily obliged.

What do you do when the vocalist of your favorite band asks you for a hug? pic.twitter.com/PAiTq1HjIM

The band continued to play, the fans kept on screaming, and the roving guards were frazzled by the overwhelming crowd. For the final songs, Champ asked the fans to approach the stage, creating some sort of mosh pit where they happily whipped out their phones, taking selfies and videos of themselves and their favorite band. 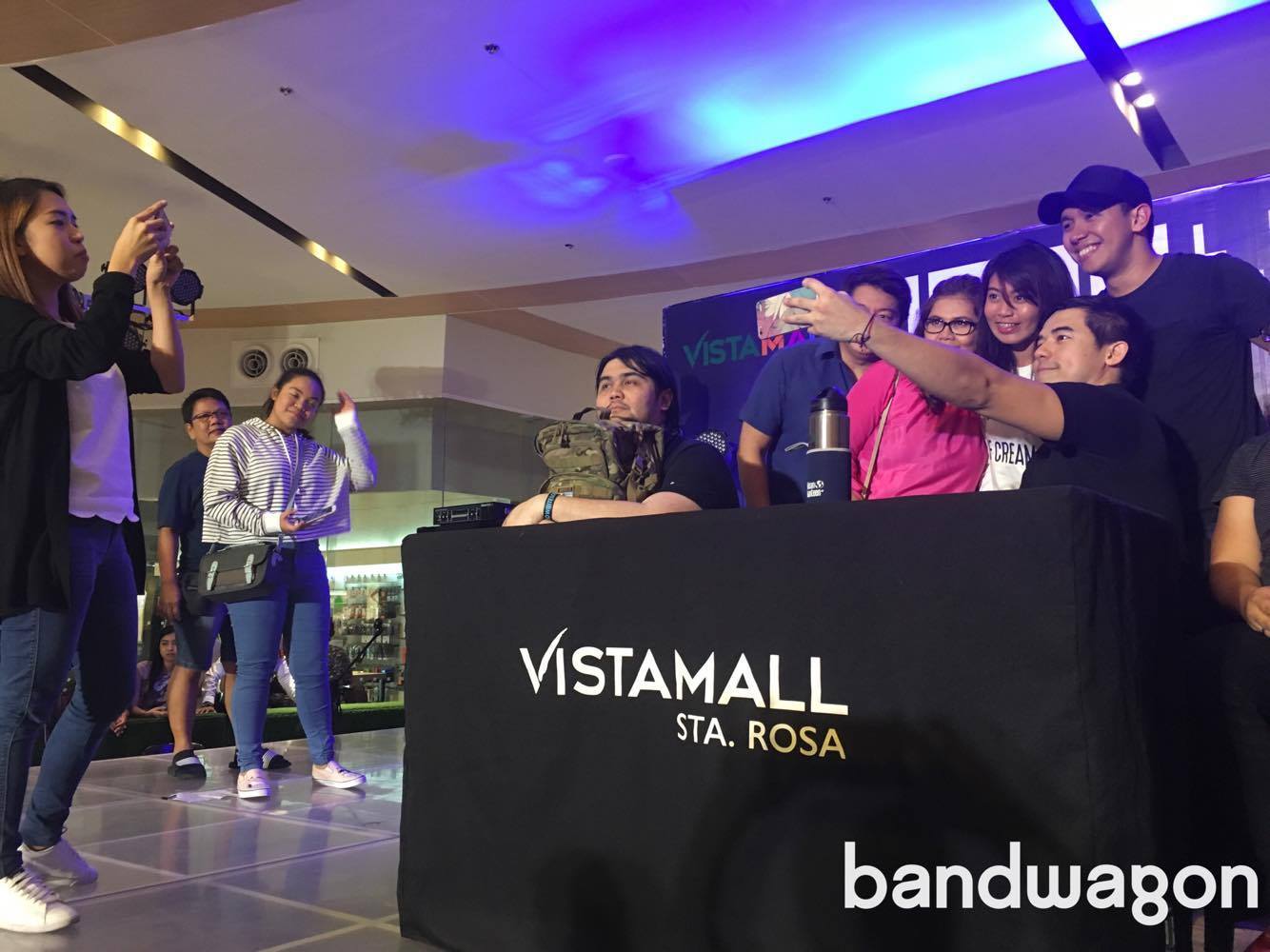 A meet-and-greet was scheduled right after the show, with the queue extending up to over 50 people. Even those without VIP access were not forgotten, as their beloved Champ went out of his way to take selfies, sign autographs and give out hugs to those who were watching from the sidelines.

"Last na 'to!"
Selfies are the new autographs? pic.twitter.com/HsQHHiYZzx

We spoke to Nikki, a 20-year-old fan who described herself as a "fan since birth", thanks to the influence of her mother. She got our attention as she primly sat in the front row, singing along with the band with so much emotion and never once taking out her phone as she did so. This made us decide she deserved the Spotify playlist Champ wrote for us. She had the card signed by all the members and was so grateful, we thought she was going to cry even more. 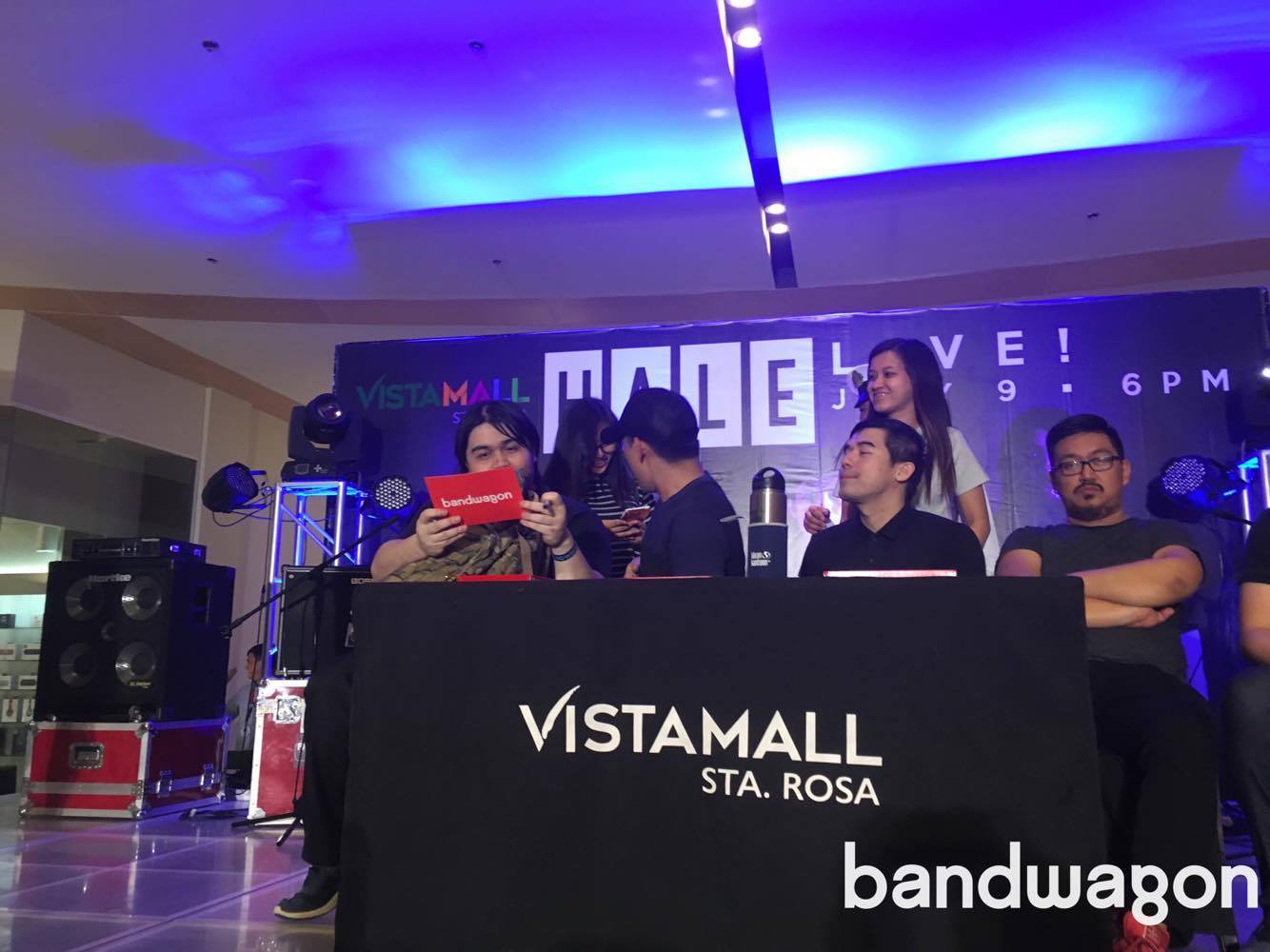 The meet-and-greet didn't stop with the audience. The guards, cleaning crew, mall staff and sound crew all wanted photos and selfies with band as well. 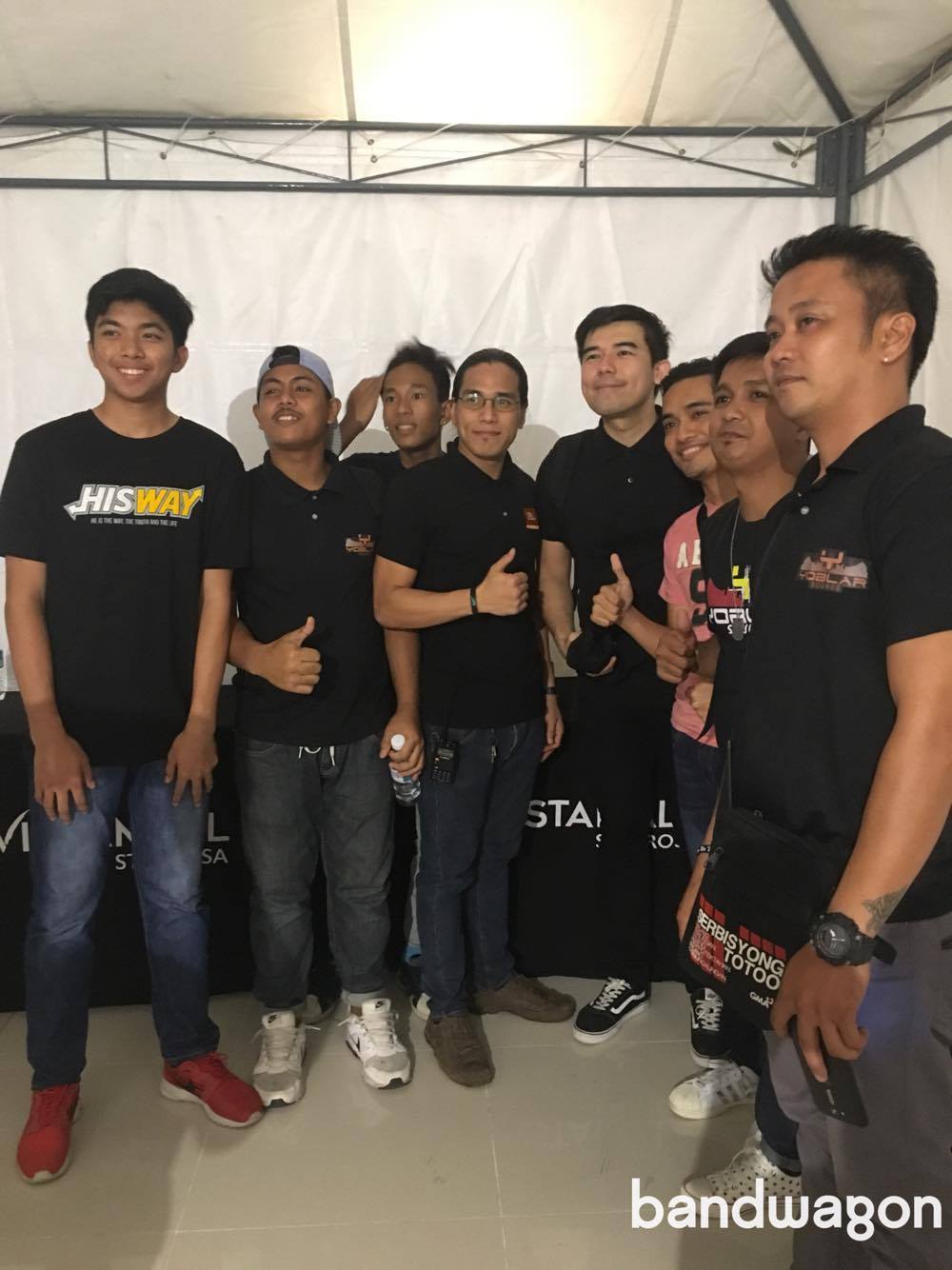 After countless photos, hugs, screams and thank yous, the band was finally able to exit the venue. As we made to leave as well, one of us was grabbed by a fan who asked, rather forcefully, whether we were related to Champ. Though a little shaken by her approach, we understood that she must have only been feeling overwhelmed by the event, and so opted to interview her as well.  Sheena shared that she has loved the band since "The Day You Said Goodnight" and was really excited to see them perform live. We told her about the band's upcoming gig at 19 East, and she revealed that she only went to the show that night because it was in a mall and on a weekend.

Mall shows are a great opportunity for people who are not regular gig-goers to see their favorite bands live in an avenue that is more convenient to them. It's a good way to bring live music to more people and has been quite a significant part of Filipino culture through the years.

Hale are set to embark on their first US tour with Gloc-9 and Ney Dimaculangan (formerly of 6cyclemind) later this month.