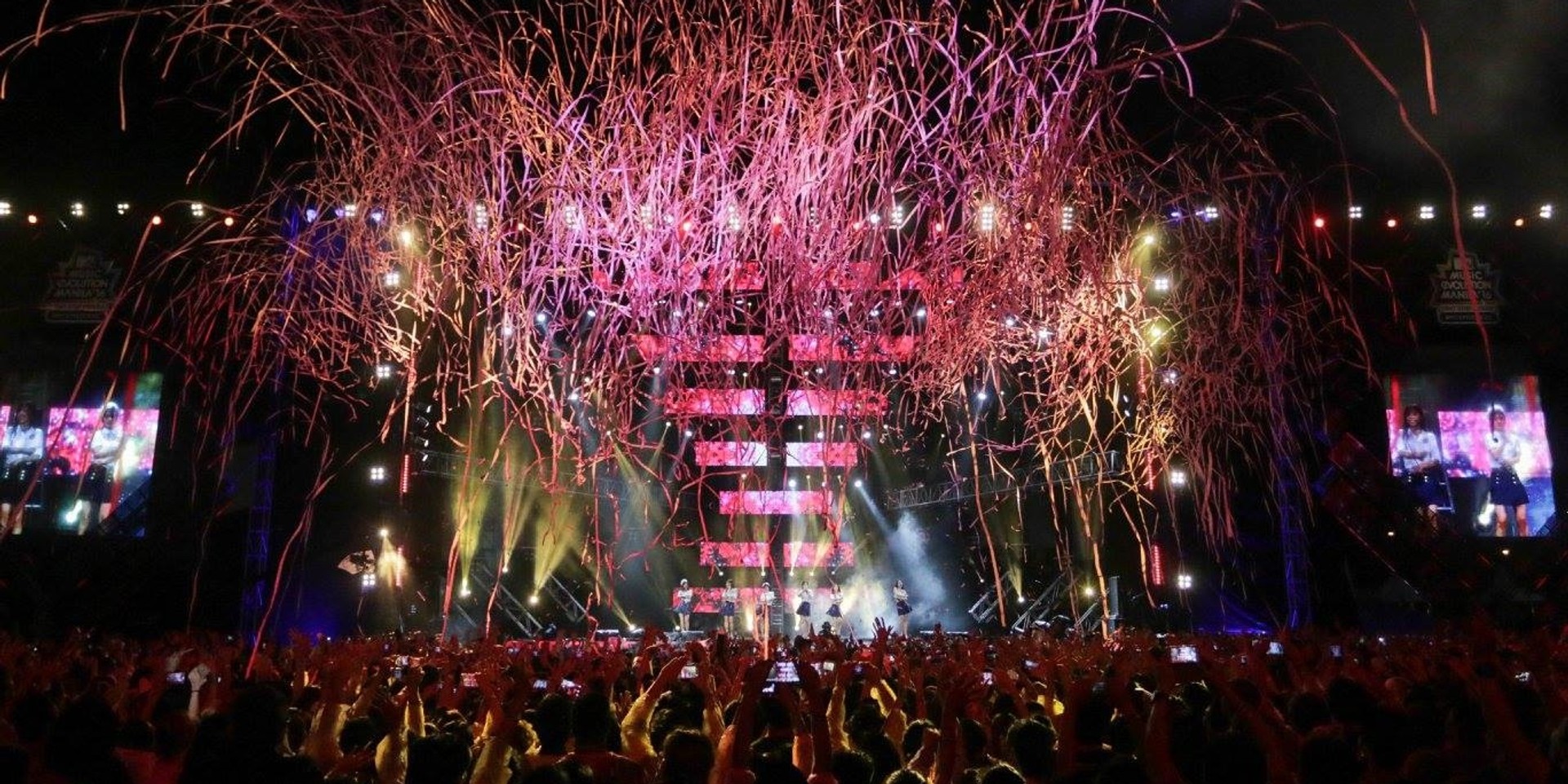 Defining pop music for thousands of people in a one-night event can be quite tricky. On the one hand, pop is always big in, well, wherever. On the other hand, this genre has many faces (and phases) – perhaps a little too many. Ask a generationally diverse group of people what example first comes to mind when they hear the words "pop song" and you'd get a variety of answers, from 'Time After Time' (Cyndi Lauper) to 'Baby, One More Time' (Britney Spears), from 'Hey Jude' (The Beatles) to 'What Makes You Beautiful' (One Direction).

The 24th night of June marked the second MTV Music Evolution in the country. Following last year's hip-hop festival, the event brought musical icons from different parts of the globe with the aim of "enabling fans to experience and discover the evolution of pop music and its dance influence". Difficult? Perhaps. Impossible? Not with this television network. More than bringing in popular names and pretty faces, MTV has successfully showed the thousands who were there how pop music has indeed evolved, making it familiar and fresh at the same time.

There will always be something truly magical about dancing in the rain, wet skin illuminated by the bright, neon lights from a remarkable stage, and ears filled with that chorus you just couldn't stop singing at one point in your life. The mix of an energetic crowd, passionate artists and overwhelming nostalgia in the atmosphere was so potent, you could almost feel it in your bones – yes, that's not the sea breeze seeping in! For one more time, we're all holding on to our free raincoats (Great call, MTV! Festival organizers, please take a page from their books!) as we look back to every hook, lick and more: 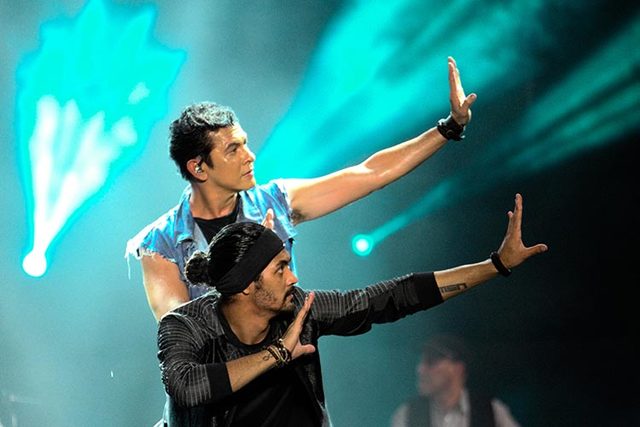 Show Starter, Showstopper: Gary V. wasn't dubbed Mr. Pure Energy for nothing. With more than thirty years of experience, this local music veteran was first to perform at the night's show, and very aptly so. His songs have appealed to many, transcending barriers, such as age, lifestyle and gender. First wave of nostalgia hit the concert grounds when he sang and danced to new versions of his songs ''Di Bale Na Lang' and 'Hataw Na.'

Gift of Gab: Gracing the stage with those unbelievably talented feet, Gab Valenciano tells tales with his body. Each of his dance sequences is purposeful, a story wrapped in steps that are on point and are presented to the audience in consistent and dynamic execution. His and his old man's killer dance moves in the heavy downpour would put the Step Up 2 final dance sequence to shame.

Like Father, Like Son: The Valencianos are big fans of collaboration, and their slot at the show proved that they practice what they preach. Integrating new sounds and remixes to the already familiar tunes (Props for using our very own kulintang!) showed that the old and the new can and does work together beautifully. Their performance was pretty difficult to top.

Watch snippets of the father and son duo here: 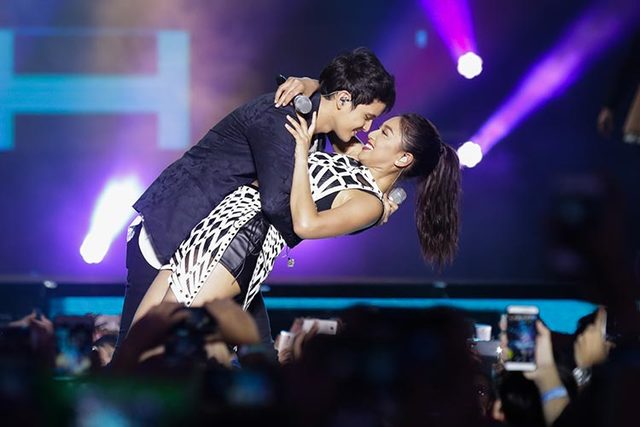 Sugar and Spice...: Sweet Nadine Lustre lacks no, well, luster. She might not have the most powerful vocals in the roster, but her stage presence and sass pack a punch. Her song 'Me & You' has all the right elements for a pop hit, proving that it deserved the Titanium Award it got from SBS Asia.

...and Everything Nice: We already knew that there was a reason why James Reid has more than enough girls following him around. What we didn't know was that it was more than his good looks – it's his dancing, too. Factor in his charm and the infectious beats of his R&B-flavored songs and you'd get something nice indeed.

What These Two Are Made Of: As far as live performances go, there are two things that make it work for JaDine (as their tandem is called): harmony and authenticity. Individually, these artists may not be the top pick out of your many 'Add to Playlist' options. Together, though, they have good musicality, their voices blending in and bringing out a lovely duet. They sound like they're in love. They look like they're in love. According to the book they have recently released, they truly are. We may be unsure about that, but as far as we know, in a world of opinions voiced out on social media, Team Real speaks (or in this case, sings) volumes. 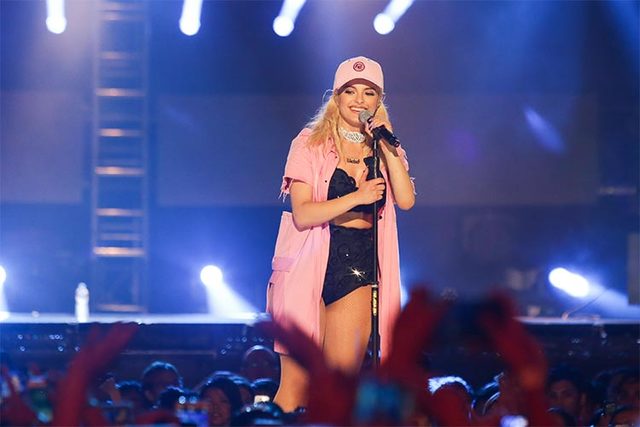 Her, Herself and She: All the acts were amazing but if there were an embodiment of a party, that would be Bebe Rexha. She had a band with her, but the singer-songwriter owned the stage. She jumped, ran, bopped her head to the beat, danced, almost did stunts among many other crazy things. And it was great.

Music Monster: The hit singles and stellar collaborations are enough evidence of her genius. That is, until you see her perform her songs live. Her version of 'The Monster' can give Rihanna a run for her money. Vocally, they may almost be at par, but Bebe's passion for her baby obviously runs way higher.

No Broken Hearts At All: However, perhaps the most memorable part of her performance was when she shared words of inspiration to the crowd on self-love.

If you feel no one is there to love you,  you got to love yourself. You have to have your back." - Bebe Rexha 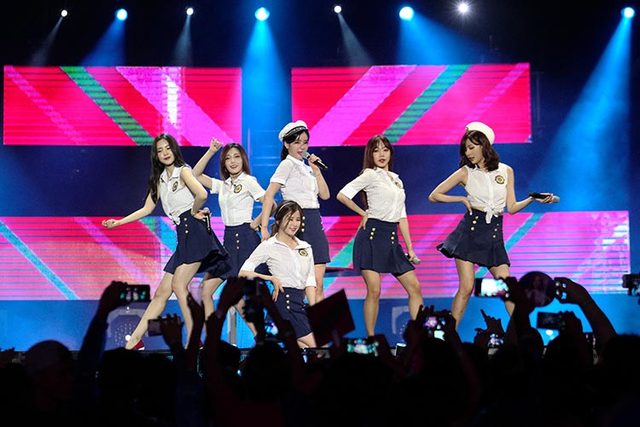 K-Pop Country: For years now, Korean girl groups and boy bands have captured the hearts of their Pinoy neighbors. So it's no surprise that Apink gathered probably the biggest crowd for the festival. Their fans weren't shy about making their presence known as they enthusiastically cheered for the girls and even sang along.

A-Listers: Apink is not your ordinary K-pop group, though. In fact, they are probably one of the best. They have won more than 20 music awards and have received more than 25 music program awards, including "Best Newcomer Artist" at the 26th Golden Disk Awards, "Newcomer Awards" at the 21st Seoul Music Awards, and landing on the "Top 10" at the SBS Music awards in 2015.

Culture Matters: Aside from their cute, synchronized routines and their hundreds of fans, APink proved to be an important addition to this year's roster of performers, simply because of the brand of pop culture they represent. Korea is known for birthing pop stars that undergo rigorous training before they set foot onstage. What better way than to introduce their very different but equally good brand of pop to the clueless but curious than by making sure that they watch the finest their country has to offer? 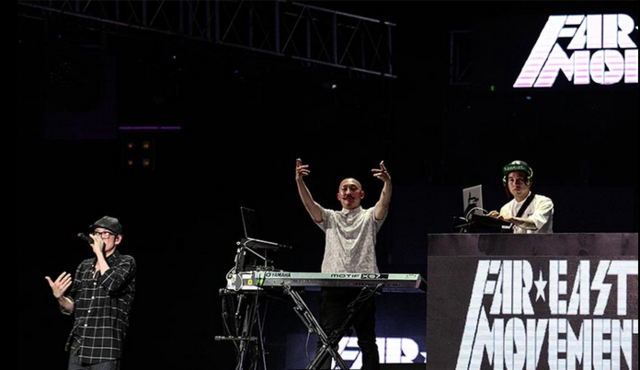 Fun Factor: They had everyone dancing to their slick beats. They had laser lights and giant inflatables. Prohgress jumped offstage and into the crowd. If Bebe is the ultimate party goer, Far East Movement is the party personified. The trio for the night had everybody pumped up and going, even though they were second to the last to perform.

Dance, Dance, Dance: With Far East Movement performing their songs the way they know best, the audience saw that pop music is a genre as flexible as no other, especially with the recent integration of EDM and hip-hop. Through their set, the group was clearly able to show everybody that night how dance has greatly influenced the evolution of pop.

"Pop and dance has always gone together." - Kev Nish

East Meets West: Their hits 'Like a G6,' 'Rocketeer' and 'Turn Up the Love' did not fail to entice anyone into dancing. Combine that with famous songs from other notable artists from the West Coast, such as Kanye West, and they brought on a melting pot of culture. With their Asian roots and their California swag, the group is one of the best representations of how pop is appreciated in a global sense and how music really keeps people together, no matter which part of the world you might come from. 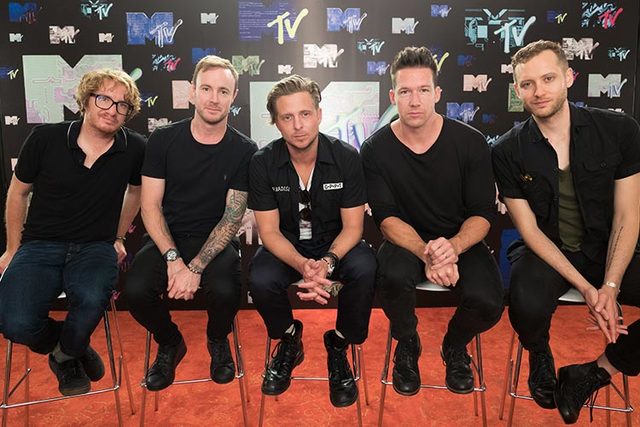 Familiar Ground: The pop-rock band goes onstage and the crowd goes wild. OneRepublic played hit after hit after hit and the memories clearly came flooding in: the strong and suave 'Secrets,' the heartbreaking 'Apologize,' the lyrical 'Counting Stars.' Each of these songs and more had the audience singing to their heart's content (and, yes, in perfect pitch, of course!).

Old but New: Despite playing mostly songs that were already dear to the audience's hearts, the band had a few tricks up their sleeves. Zach Filkins performed a wicked guitar solo. Ryan Tedder performed "Burning Bridges" a ca pella. Claiming that their performance in the country was a "stripped down version of their [usual] set", OneRepublic successfully reintroduced the hits that made them the pop icons they are without losing the strong connection they already have with the crowd.

Watch Out, World: During the concert itself, Ryan shared that they're finishing their new album which will be released soon. However, it is said to be quite different from the OneRepublic jam that we have gotten used to.

Music is the international language. The better you get at speaking it, the more dialects you want to speak." - Ryan Tedder

​With influences stemmed in the different places the band has been to, the album is bound to sound different indeed. But if the success of MTV Music Evolution is any indicator, we're pretty confident that OneRepublic – or any other pop band or musician willing to give it a go, for that matter – would be able to send a new pop hit with a unique touch to top the charts very soon.