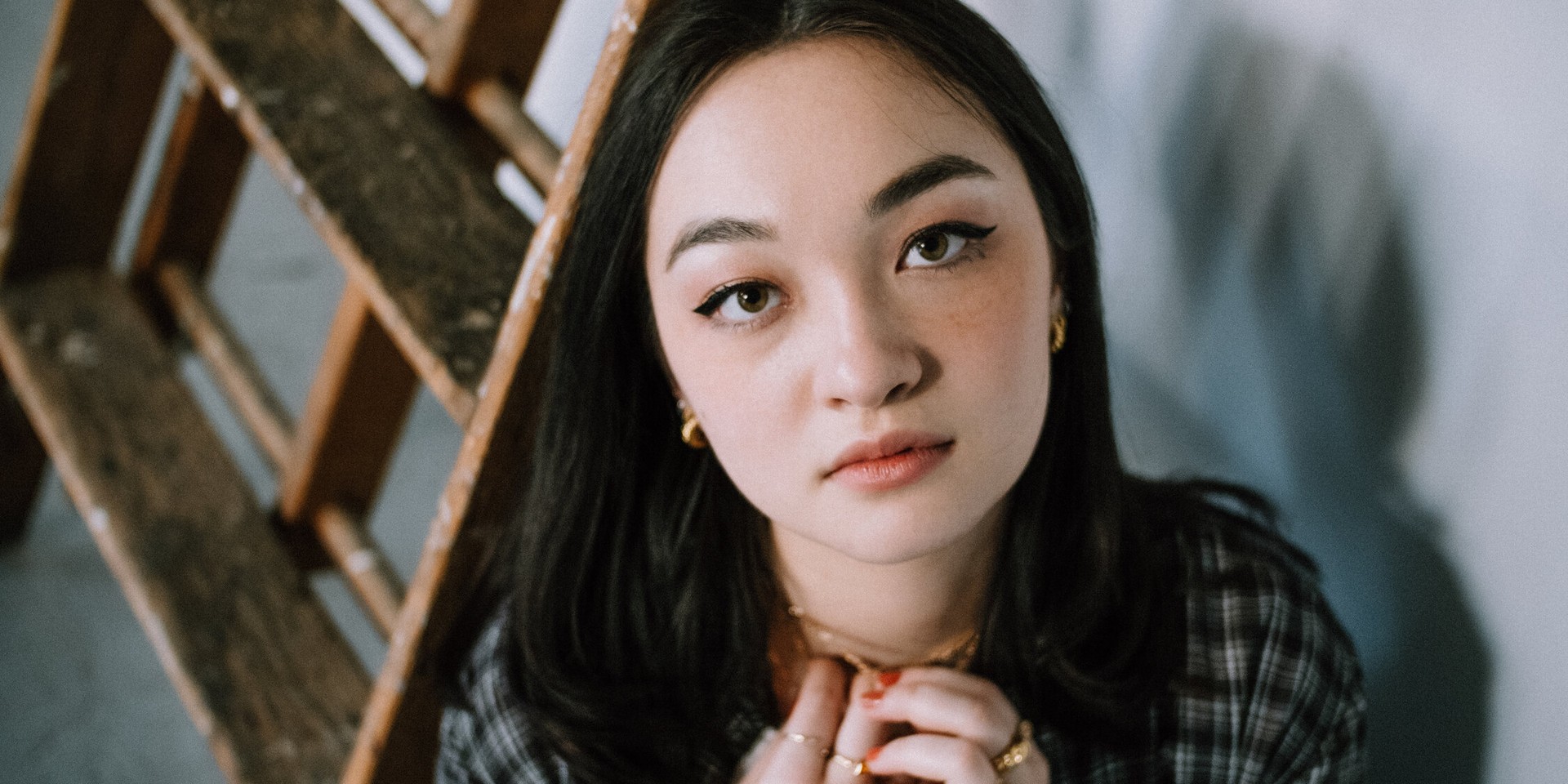 When you combine two of your greatest passions, it's nothing short of pure magic – which is exactly what mxmtoon felt like working on Life Is Strange.

A singer-songwriter and avid gamer, Maia – who is artistically known as mxmtoon – got to live out one of her wildest dreams, featuring on the soundtrack of one of her favourite video games.

The 'prom dress' act recently worked on music for the latest instalment of the narrative-based adventure game, Life Is Strange: True Colors, and also acts as the singing voice of the main character Alex Chen.

When asked about how she felt about working on the video game, Maia shares how it felt like "a miracle" and a series of fortunate events.

"I had been I worked with their team and ended up cutting a lot of the vocals last year, and now it's finally out in the world which is just so wild. It's been a long time coming but I still feel like it was just a series of coincidences, and I just got really lucky," she tells Bandwagon.

To celebrate the release of Life Is Strange: True Colours, the singer also dropped her latest EP, true colors that feature all of the songs she worked on for the video game, including her original track 'in the darkness'.

With both the EP and game out for the world to enjoy, Bandwagon caught up with Maia to talk about Life Is Strange, how she connected with Alex Chen, and her experience streaming on Twitch.

How were you approached to work on Life Is Strange: True Colors?

When they were working on True Colors – and I think at that point they had been working on the game for like years so it was already in development – they were trying to figure out the final touches. They knew that they wanted to make it distinct for Alex who has a lot of moments where she sings inside of the game, so they asked me at by some miracle to see if I was willing to do it.

I've been playing Life Is Strange since 2017, probably around the time they started working on it (laughs) and I was just such a big fan. So, when they asked me if I would want to try and sing for her, it was an immediate yes.

my cover of “creep” is here and i hope i didn’t ruin a classic 😅 but with this announce, i am so excited for you all to finally know that i’m a part of @LifeIsStrange: True Colors and honored to be the singing voice for the main character, alex💜 https://t.co/7PbZBIyHJs pic.twitter.com/fs44tOM2xP

What was your experience like working on the video game, especially as an avid fan of the series?

It was really fun. It was so cool to be able to have these behind-the-scenes conversations with directors and game designers about what their visions were for these moments within the game and to hear a little bit about the universe before it was announced to everybody. As a huge nerd, it felt like I had walked into a room that I wasn't allowed to be in and I was getting all this information and it was so hard not to share it. I'm so glad I don't need to keep any more secrets.

You mentioned previously that there are “eerily similar” characteristics between you and Alex Chen, how did that influence your creative process for this project?

I think it made it really easy to just write as if it was writing for myself. Alex and I share so many identities with each other, both being young, bisexual women who are Asian, and kind of trying to figure themselves out. Empathy too is such a huge, prominent part of her story within this Life Is Strange game so it made a lot of sense to me to just keep writing the way that I do because it's already such a central theme of what I make in my own time for mxmtoon.

So, it made it really easy. I think there are ways in which maybe it could have been harder but I don't know, the easiest job ever is being yourself so getting to be Alex is probably as close as I could be to doing just my own thing. It was very simple and straightforward for me.

Can you tell me more about the true colours EP?

Yeah, so the EP, true colors that I made for Life Is Strange is just a collection of all the songs that I had to sing, both for Alex and also created for the game. So, we have 'in the darkness', which is the original track that I wrote for Life Is Strange: True Colors, and then the covers I did, and an original they wrote called ‘every wave’.

So I had to sing versions of those songs for the game but I decided that it would be really fun to try and mxmtoon-ify the production of the songs. So all of these versions are just kind of combinations of thinking about ‘alright, let's just play around and have fun with this and make a song that we were given by the team into our own thing’. It was really fun to work on.

hehe, as most of you know, i am the singing voice for alex chen in life is strange true colors! as a result, i am releasing a lil EP of the songs i sung for the game this friday :,) so pumped for this and the game to be out 💜 https://t.co/7kJ9VtGXBP pic.twitter.com/R2CWEI5EQi

What was the inspiration behind ‘in the darkness’?

The inspiration behind it was really rooted in thinking about if I was Alex Chen's friend and what would I tell her based off of what I know about her and the story that she's going to go through.

Something that I found really universal and I think applies to every person's life is sometimes you need a friend who's going to tell you like, ‘you can be in a really dark moment but you can still find the light at the end of the tunnel’. So, ‘in the darkness’ is about that.

I wrote it at the time where we were just been going into the pandemic, when I was like life really sucks right now and I want to make a song that's kind of about being able to look forward to the future a bit. ‘in the darkness’ was born out of both my personal experience and what I needed in that moment of writing, and what would work well for the game.

So, what is your favourite Life Is Strange game?

I just played Life is Strange 2 recently, like last week. I finished it on Twitch and that game is wild. I wasn't expecting so many twists and turns and I cried multiple times. I have not played true colours yet but I'm super excited to.

Do you think it's going to be weird like hearing your voice in the game?

It'll be so weird. I feel like I'm gonna cringe and like, mute my screen because I'll be like ‘this is too weird’ (laughs). I can't, it'll be so strange.

it is the same outcome

In the past year, you've also been streaming on Twitch. What has that experience been?

It has been really fun. As a musician, I was really sad when I found out that touring was not going to be an easily executable event for me or for audience members for the foreseeable future so Twitch streaming has really provided me with an outlet to create that communal experience with people.

It's been really fun, like having this sort of community of people I see on a weekly basis. I check in with people about their lives, and they give me updates about what classes they're taking, or like if they've adopted a pet and all these things; and it's super fun for me because my favourite part is the relationship building that I get to do with people choose to listen to my music. It's been and it's definitely kept me sane throughout all this.

I've been in your Twitch chat a couple of times and it’s this very comforting and wholesome corner of the Internet. How do you maintain that and keep a strong relationship with your community?

I don't know honestly, somehow I have the nicest Twitch community I've ever seen (laughs). I'm so thankful that I don't have to deal with horrible people all the time.

I think it comes down to my ideology around audiences and artists is really making sure that it remains a peer to peer relationship, and what I mean by that is I never want to put myself on a pedestal above any other person. I make it and try to stress very clearly that I'm just an individual who is struggling to figure out who I am and struggling to live life and everything's just a struggle, and I'm struggling alongside all of you. It's something that we're all going to go through and we'll hold each other's hands while we're doing it. I think that has been really helpful.