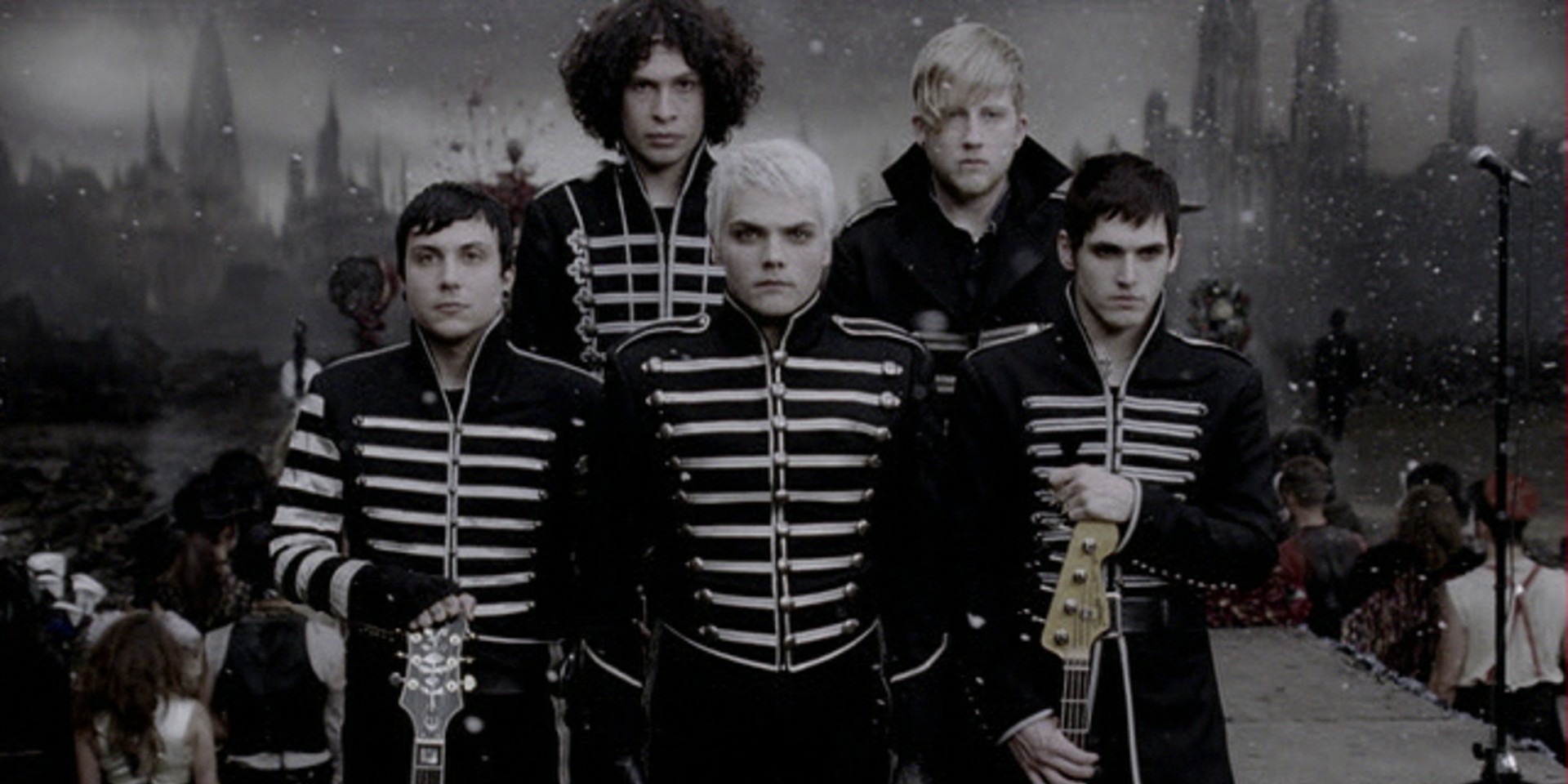 One of the plights of going to a major concert is how to fill your belly up in preparation for the evening to come.

There was only one food truck serving hundreds of My Chemical Romance fans waiting out in the cold before the doors opened, and wait we did. If we had waited for six years for our boys to return, we can wait another hour and a half to quickly scarf down a Spanish rice bowl in two minutes before we entered the Shrine Expo Auditorium. But let me take it back to the day that started it all.

Back in 2006, I met up with a long-time best friend and listened to her gush over The Black Parade album. The centerfold art captivated her; a Patient in the afterlife, being shown his life’s mistakes, regrets, and loss by a grandiose parade celebrating his humanity. It wasn’t long before I discovered Life on the Murder Scene and immediately fell in love with the self-proclaimed "dangerous cupcakes."

MCR's contemporaries and fellow New Jersey-band band Thursday, who opened the show, acknowledged that everyone was there for one reason: our love for My Chemical Romance. Vocalist Geoff Rickly also claimed that MCR fans are one of the kindest and most respectful audience, which I thought was just flattery to hype up the crowd.

Although when I brought this up with my brother later, he said that most openers deal with booing and impatient fans who couldn’t wait to see their favorite band perform. They were right. As I was waiting in line at the food truck earlier, I stared at all the fans in the queue and came to the realization; the MCRmy are not an obnoxious, loud bunch. We were all patient, a fierce devotion and love for the band kept us strong against the LA cold.

The concert culture Gerard Way fostered for their shows still carried on up to this day. Even back when they were gaining a bigger following from their Three Cheers for Sweet Revenge album, he always told the audience to help fellow fans if they fell over or to find someone to talk to if they were feeling suicidal.

Basically, he wanted us to look out for each other. They were genuinely wholesome people who just happened to be the eyelinered-face of the emo era.

Here’s to say that those grainy YouTube clips led me here, standing in the middle of a sea of fellow emo kids, eyes staring upwards at the mysterious angel statue curtain, with its arm outstretched to us as though waiting to pull us underwater.

Finally the intro plays, and the screams begin.

A brilliantly mixed edit of audio references spanning from all albums and music videos got us all pumped up. It is unusual for a band to open with a major hit single, so when the opening dialogue "You like D&D, Audrey Hepburn, Fangoria…" came through, the crowd excitedly pressed forward.

The angel curtain drops as My Chemical Romance officially returned, not with a slow dramatic rise to the stage or being back-lit by a flashy LED screen, but by setting off a bomb of a hit inside the Shrine with the headbanger 'I’m Not Okay.' The energy inside the auditorium exploded in screaming and singing. It was a claustrophobe’s nightmare.

The whole experience was uncomfortable, dehydrating, sweaty, and the best time of my life. When they closed the reunion show with the epic 'Welcome to the Black Parade,' it didn’t feel like the end but the beginning of something more.

They have closed with 'Helena' ("So long, and good night") or 'Famous Last Words' (the title alone) in the past, but for this very unique evening, they sent us out into the night with chants of "we’ll carry on" ringing in our ears.

We left the Shrine, feeling like we have somehow helped them cement their legacy as future musical legends that will live on through the ages.

My sister told me later in the car that the overall emotion from the fans in line was sheer disbelief that they even got tickets. When tickets went on sale last month, it sold out in four minutes. We were the lucky ones.

It was also heartening to know that every single person in the venue was 100% here for the boys. They could have sold this reunion to a bigger venue, but they kept it small and intimate, only to be shared with their loving family, friends, and 6,000 lucky devoted fans. No one had tickets simply because they like a couple of songs and had the money to spend. Everyone in the room would lay their hearts for (and will throw our money at) the band.

And this is what keeps us hooked to them. In this day and age where truths are mutilated and beliefs are being twisted, MCR came back at a perfect time in a beacon of their authenticity.

They truly did pick the perfect venue for their comeback after all. The Shrine had beautiful church-like interiors, the angel-adorned stage became the altar where we welcomed their light with open arms, and all throughout the night our fists pumped up in punk rock prayer unitedly proclaiming that we are not afraid and will keep on living.

Stream My Chemical Romance's 'Welcome to the Black Parade' music video below.